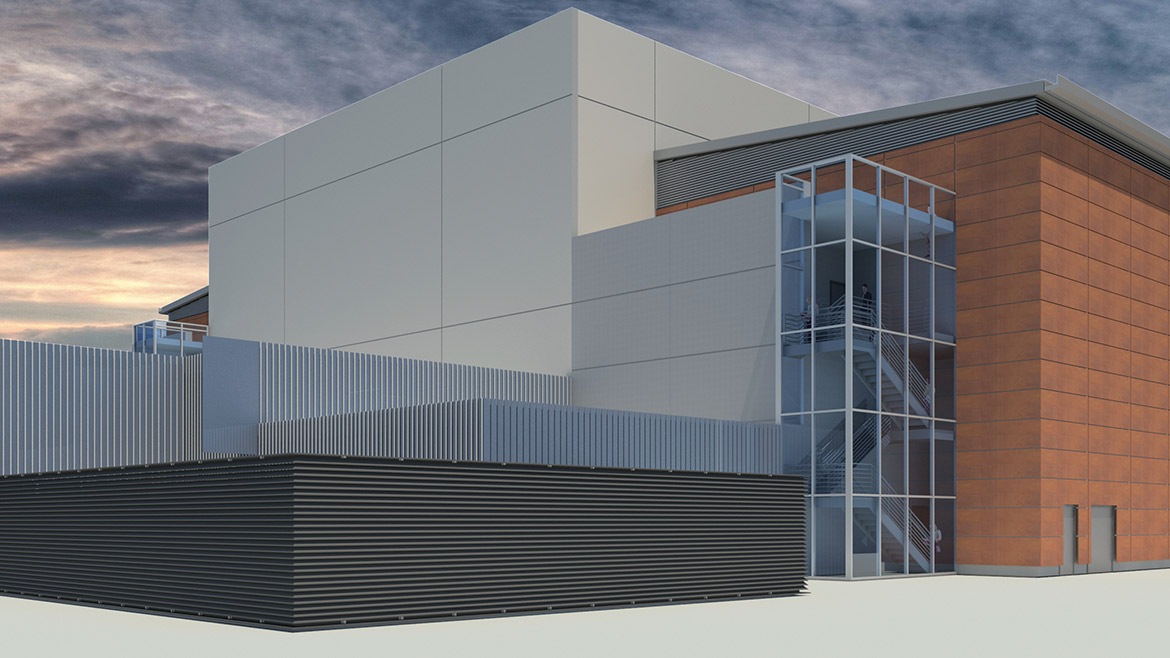 Northwest Medical Isotopes LLC scouted out more than a dozen locations around the United States when they were making plans to build a new radioisotope production facility.

The Corvallis, Oregon, company needed a place with a top-flight research reactor nearby plus a pool of trained potential employees to help run the facility once it became operational. It needed a place that could offer enticing tax incentives to build, as well as one that was relatively close to one of the two national distribution centers for the generators needed to prepare the isotope it would produce — Molybdenum-99 — for use in hospitals, or at least some place close to an airport that could shuttle its product to one of the centers.

MU’s research reactor has been operating at 10 megawatts since 1974, making it the nation’s highest-power university reactor, and runs 6.5 days a week all year long. MURR has produced decades’ worth of employees trained in working with radioactive materials. The university also just happened to have a parcel of land in Discovery Ridge Research Park, just south of Interstate 70 and east of U.S. Highway 63, about a 10-minute drive from Columbia Regional Airport and a 125-mile jaunt from one of those generator distribution centers, in St. Louis. (The other is in Boston.)

Oh, and Boone County was able to offer about $7 million in tax abatements. 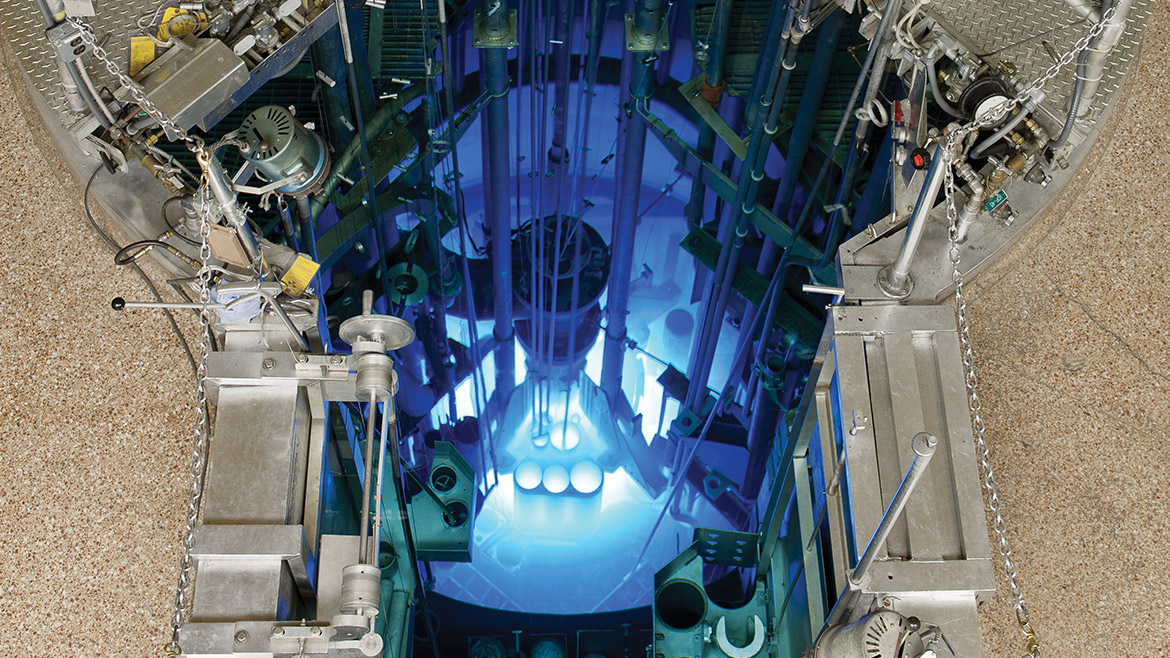 Within the next three years, the plan is for Northwest to be producing Molybdenum-99, dubbed “Moly-99” for short, for hospital patients all over the country from its brand-new facility in Columbia. MURR will play a key supporting role, irradiating low-enriched uranium and shipping it to the facility for Northwest to convert into Moly-99.

“The U.S. consumes about 80 percent of worldwide Moly-99, and it has not been produced domestically since the 1980s,” says Northwest Chief Operating Officer Carolyn Haass. “Our country has been developing a strategy for the production of Moly-99 since 2007. MURR has supported Northwest in research and development of Moly-99, which has helped them advance their science.”

The utility of Moly-99 is in one of its “daughter products,” Technetium-99m. The most common radioisotope used in nuclear medicine procedures in the U.S., Tc-99m is used more than 35,000 times a day for imaging purposes.

Say, for example, a patient is experiencing a blockage in the supply of blood to their heart. An injection of Tc-99m, paired with an imaging machine, can give doctors a real-time, surgery-free view of how the patient’s blood is flowing.

Northwest, with irradiation support from MURR, will produce the Moly-99 and then ship it to a radiopharmaceutical manufacturer, which then separates the Tc-99m and puts it into a kit for usage in hospital settings.

“The vernacular in the industry is a ‘cow,’” MURR Director J. David Robertson says. “We send the Moly-99 and a technician ‘milks’ the Technetium-99m from the Moly-99 cow we’re generating.”

The U.S. has experienced intermittent shortages in the isotope in recent years as elements of the supply chain have been interrupted, resulting in a warning from the Society of Nuclear Medicine and Molecular Imaging of a “significant shortage” internationally as recently as November.

Around 2009, the federal government started getting involved.

“They felt that we needed to start having a domestic supply because we can’t just deal with international supply,” Haass says. “It’s something that is so important. When we use 80 percent of the worldwide demand and it’s all coming internationally, that didn’t make any sense, and it affected our health care.”

Congress passed the American Medical Isotopes Production Act, which authorized the domestic production of medical radioisotopes like Moly-99, in 2012. Northwest was founded in 2010 in anticipation of a move like this and, starting in 2012, it began contracting MURR for research into methods for developing Moly-99.

They needed to be able to ensure a safe, fast, efficient model all the way from production through distribution.

“It’s a short-lived isotope, so you need to be able to move things around efficiently,” says MURR Associate Director Ken Brooks. “I often describe it, as many in the industry do, as melting ice cubes. But there’s not a Yeti cooler to stop this from melting.”

Northwest announced its plans to build the production facility in Columbia in 2014, but it did not receive the final go-ahead from the U.S. Nuclear Regulatory Commission until May 2018.

In September, the Boone County Commission voted to approve a tax break for the future $108 million Northwest facility at Discovery Ridge, one that provides for a 50-percent property tax abatement from Boone County and its taxing districts for the next decade.

Haass says the plan is to begin construction on the approximately 69,000-square-foot facility next summer. The project is slated to take about 17 months, with an average daily workforce of 38 employees and a peak of 82 needed during the construction process.

After construction is complete, the facility will undergo a “cold commissioning,” in which it will run through all its processes using water to make sure everything is functioning properly. Once that’s done — and once all the applicable permits and licenses are cleared — the facility goes “hot.”

“That means we can bring in the uranium,” Haass says. “That still takes us three to six months. You just can’t start up the facility and have it work the next day. You have to make sure everyone is trained from a cold perspective before going into real operations.”

All in all, Haass estimates that the facility will be entirely operational by late 2022.

As part of the tax incentive stipulations, Northwest has agreed to create and maintain at least 85 jobs that pay at or above the county average wage. Haass estimates that the facility will employ 104 for the first couple of years, with a peak employment of 138 for the 40-year operational life of the facility.

About 85 to 90 percent of those workers will be recruited from the Columbia area, Haass says, all but some senior management and senior-level engineer positions.

“The idea is there’s a need to have a domestic supply of Moly-99, both in case you ever had a situation where you closed the borders for bringing in those melting ice cubes, if the government ever chose to do that, and just to strengthen the supply chain,” Robertson says. “It’s a very precarious supply chain today. We have significant amounts of activities and workforce development for people to get the training and understand the quality programs required for working with radioactive materials. That’s attractive to businesses.”

The Advantages for Our Community

Aside from the infusion of high-paying jobs that Northwest will be bringing to the community, Brooks and Robertson see two more distinct advantages that the Northwest facility will bring to Columbia, MU, and MURR.

First, the prestige of being involved in the process of producing such a crucial component to the health care industry. Second, the influx of research seed money that the arrangement with Northwest will provide.

Robertson says MURR has already worked with industry partners to develop treatments for inoperable liver cancer and to help manage the pain of bone cancer, and they’ve helped create a brain imaging agent as well. The cachet and financial support from the association with Northwest will continue opening up those opportunities.

“No other research reactor on the planet operates as reliably and frequently as ours,” Brooks says. “When you’re talking about supplying short-lived radioisotopes, that’s a way the university can serve the nation in a really deep and meaningful way. And the university is forever looking for new ways to generate revenue to fund additional research. That’s how it’s meaningful for the university.”