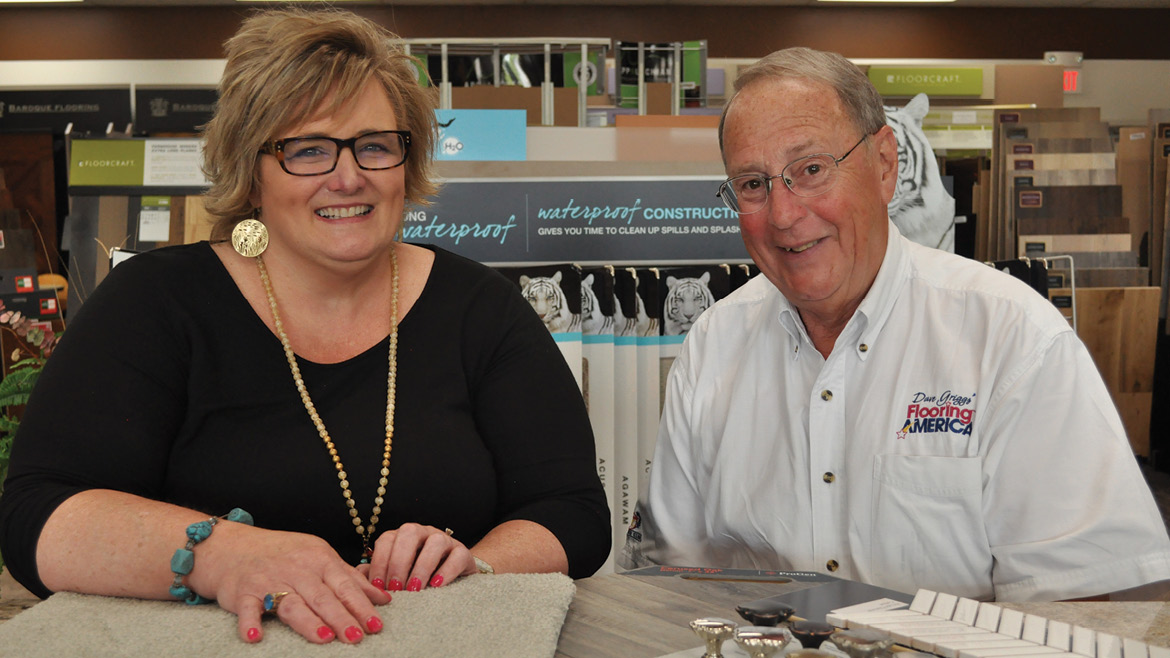 Small business owners put their heart, soul, sweat, and tears into building and growing their business. When it comes time to hand over the business to someone else, that process looks different for everyone. From training up an employee to take over and exploring the idea of selling to a family member, succession plans look different for everyone. Koonse Glass and Dave Griggs’ Flooring America share their successful succession stories. 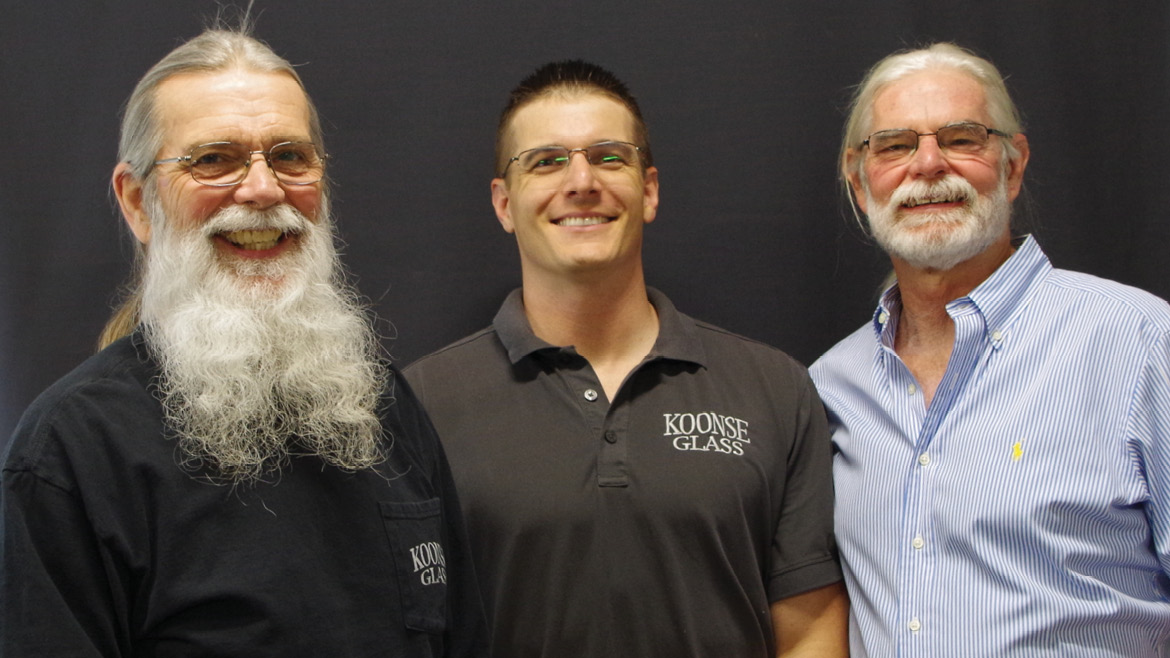 Silas Koonse did not intend to work in the family business. Founded by his grandfather in 1967, Koonse Glass had been run for years by his uncle Tom Fiegel and, later, by Silas’ father, Michael Koonse.

Silas worked in the store through college, then spent years in the insurance and mortgage industries.

As Michael was approaching retirement, he and Fiegel tried to find an employee interested in ownership, but most were close to retirement and none of Silas’ siblings were interested. They considered just closing the store.

“That was kind of a wake-up for me. I didn’t want to see that happen,” Silas says. “I had a lot of pride in the business. I also felt at the time that there was a lot of potential in the business, from where they were to where we could be.”

Silas approached Michael about buying his half of the ownership in the business. At first, Michael was cautious.

The two discussed the ups and downs of running a small business for a long time. Silas had worked for large insurance companies, so the day-to-day would be quite different. Was he ready?

“But at the same time, I grew up in the business, and I was at the dinner table when he would tell his stories about the frustrations of running a business,” he says.

Since that transition in 2013, Koonse Glass has moved to a larger shop on Paris Road and increased staff by 45%.

The family had a number of conversations about the changing of the guard.

Michael’s transition needed to be cut and dry, they decided. They gave themselves a six-month deadline to work out all the details and make the change.

The family was on the same page about the company’s future and who would be leading it. Fiegel was excited for the company to continue and emphasized that it was Silas’s to run and he would stand behind Silas’s decisions and counsel him.

“That was really important, because with family dynamics, you’ll get into grudges that are 30 years old, disagreements that are unresolved,” Silas says. “And we did a good job getting around that. Tom and I are close, but the way he approached it from the beginning was, ‘I’m here to support you and you building this company into what you want it to be.’”

The six-month transition period helped Silas and Michael make every day a learning experience. Silas spent the time learning about the company structure, contacting clients, and just having conversations with Michael.

The approaching transition date was critical to creating a sense of urgency for all the important tasks that had to be done before the change. Most importantly, Silas had to complete the transition to becoming the face of the company.

Michael introduced Silas to every customer, vendor, and supplier and told them about the transition coming. It meant he could start preparing everyone for the change without handing over the reins immediately.

“I think that was the biggest thing I had to develop in that short amount of time. Rather than ‘he’s gone,’ I’m making these phone calls trying to develop that face,” Silas says. “That could have been done by myself, but it would have been much more difficult. It was so much easier to have him facilitate that.”

You Are the Business

While deciding whether to purchase his father’s ownership in the company, Silas considered the impact it would have on his family.

“I saw the potential in the business, and I knew where I wanted to take it, the new location, some rebranding, the growth of it I wanted to do. It was going to be 60 to 70 hours a week all the time,” Silas says. “And so, having that support, that understanding at home, and not getting in over your head, I think it’s something everyone should think about.”

For those considering small business ownership, Silas says to consider how demanding owning a business is. You are the business.

For him, getting other work experiences was critical in his development.

“I never had any pressure from my father or my uncle to come back to the business and get involved,” he says. “And that was really important,  looking back, that there was no pressure from the older generation to force me into it or make me feel obligated to become a part of it. It really happened naturally, which is mainly why I think we’ve been successful in the transition.”

Dave Griggs spent three weeks traveling this spring. “That’s the longest I’ve been away from Columbia in my lifetime other than in the Army,” he says.

It’s difficult for a small business owner to leave their company for that long, but he’s two years into his sale of Dave Griggs’ Flooring America to current owner and president Michele Batye.

It was a transition a decade in the making that took ample planning and lots of honest conversations.

“I consider this business almost my child — our employees are my family,” Griggs says. “My focus may have changed a bit, but my feelings and relationship with this company and the people involved in this company and our vendors that I’ve done business with for 25 to 50 years hasn’t changed.”

Batye joined the company in 1989 and held many roles before becoming president and owner.

“She’s been in highly responsible positions in the company as soon as soon as she could grow into them,” Griggs says. “I’m kind of the crazy, big ideas person, and Michele’s always been the person that grounded me and made things happen. It was just a natural progression.”

Griggs and Batye had daily discussions for years about high-level ownership topics. It was an emotional decision for two people who had worked together for 25 years.

Through those discussions, they agreed on a plan to pass the torch. Griggs would be available a certain percentage of time and would still have day-to-day responsibilities.

“I hang around a little bit less now and I may not be as available as instantly as I used to be, but I can’t really sense a great deal of change,” Griggs says.

It was also important to make sure the employees, many of whom had worked for the company for three decades or more, were along for the ride.

“The driving force for me that was so important to step into the succession of the business was because we had such a wonderful crew and we had such a good thing and I wanted to keep it going,” Batye says. “So it was just making sure that, especially with the things that aren’t my strong point in the business, that there wasn’t going to be a change with the employees that were handling those things now.”

One of Batye’s challenges was to become as synonymous with Dave Griggs’ Flooring America as Griggs himself. That meant getting more involved in the community, a process she began before taking ownership.

They slowly rolled out the change to the public, using quiet, small measures instead of a grand re-opening. All the marketing stayed the same, with Griggs as the spokesperson. That gave Batye time to figure out the other aspects of her new role in what was a busy first year.

This year, the two are featured in commercials together and Batye is alone in the print ads.

“We’re starting to tell that story more,” she says.

In that first year, Griggs stayed the “front guy” and worked on various commercial projects and with suppliers.

Sometimes it was difficult to say things like, “I’m going to have to ask Michele if we can do that,” he says. Other than that, his priority was to help Batye however she needed.

Reflecting on Year One

The first year was a whirlwind for Batye. She didn’t realize that although she’d cared about the business for decades, she would feel different as owner.

“I’ve [felt like] I’ve taken ownership in this business for a long time . . . but it really is a different feeling when it’s you at the end of the day, when you’re the bottom line at the end of the day,” she says. “When you wake up and you’re responsible for all the people, all of their families, you have that responsibility on you.”

She learned that she can’t do everything. She had to develop an organizational system that worked for her. She also works with a business coach.

Now, she’s looking toward what her vision of the company’s future looks like.

“I didn’t want to come in and make a lot of quick changes,” she says. “The first year I was just cultivating Dave’s company, and now I have plans to change things here and there to make it more my company.”

It can be challenging, Griggs says, to set feelings aside and evaluate a business you’ve built. But that’s what needs to happen.