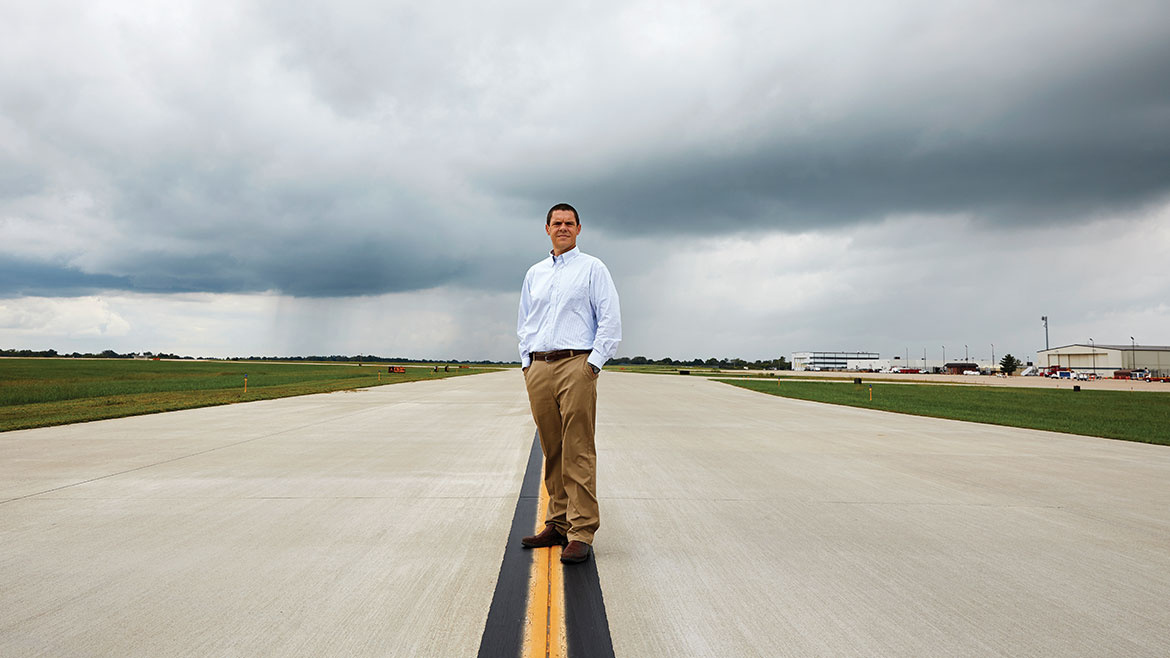 A lot has changed since the main 6,500-foot runway on Highway H had its dedication on November 2, 1968, and the new Columbia Regional Airport opened shortly thereafter.

What served as a smaller, regional aviation center handling just under 18,000 passengers on 19-passenger prop planes in 2007 has since become a significant source of economic impact for the City of Columbia.

According to the Missouri Statewide Airports Economic Impact Study commissioned by MoDOT, the airport accounted for 745 jobs in 2012 with an annual payroll of $26,925,000, and a total output (measure of the value of goods, services, and capital expenditures) of $87,179,000.

Since the publication of the study, the airport has continued to grow exponentially. Airport Manager Mike Parks, who has worked for the airport for 16 years, began seeing the turnaround in 2013 when the airport added a daily flight to Chicago and two to Dallas/Fort Worth with American Airlines.

“With the addition of American Airlines, you can see the growth in the amount of flights being added, as well as the aircraft type,” Parks says. “The enhancement of the aircraft themselves is also an achievement in terms of capacity and comfort for passengers.”

The growth spiked again in mid-2017 when United Airlines began daily service to Chicago and Denver and the 76-passenger CRJ900 jet, complete with 12 first-class seats, was added to the fleet for American Airlines’ flights to Dallas.

The amount of growth also necessitated the addition of a second TSA screening line for early morning flights.

“The additional lane was added to support peak airline passenger flow,” says Jim Spriggs, federal security director for the greater St. Louis area of TSA. “COU demonstrated passenger flow this summer which exceeded our capacity each morning, so TSA worked with Mike and his team to increase our capacity by adding a second X-ray.”

By adding the capacity now, the airport benefits from having a redundant system. They are also positioned for even more growth in the future.

“The recent growth at Columbia is good for the state of Missouri and for the folks that live and work in the local community there,” says Spriggs. “The team’s commitment to our mission and to secure air transportation is outstanding, and we look forward to working with them on the new terminal project.”

While the numbers show the airport’s growth, Parks believes people’s decisions to fly in and out of COU aren’t always tangible. He credits much of the airport’s success to the free parking, competitive pricing, the support of the city staff, and the willingness of his 17-person team to go the extra mile.

“It makes it a joy to come to work when people really enjoy flying out of here,” Parks says. “The employees work really hard to show passengers why they should fly out of Columbia. We are getting a lot busier, but we won’t get away from that personal touch.”

And while Parks does not have access to the number of passengers flying for business versus leisure, he sure has noticed a lot more skis going through the enhanced baggage screening since the Denver flight and the new equipment was added. “They didn’t used to do that. Everything is beginning to fall into place to be able to continue growing the leisure market as well.”

But perhaps the most notable celebration is the receptivity of the airlines, which was apparent to Parks at a recent national conference.
“The airlines now see growth in Columbia, so we don’t have to seek them out like we did in years past,” Parks says. “Now they’re seeking us out.”

The City, in partnership with the city’s Airport Advisory Board, is planning a formal anniversary celebration later this fall.