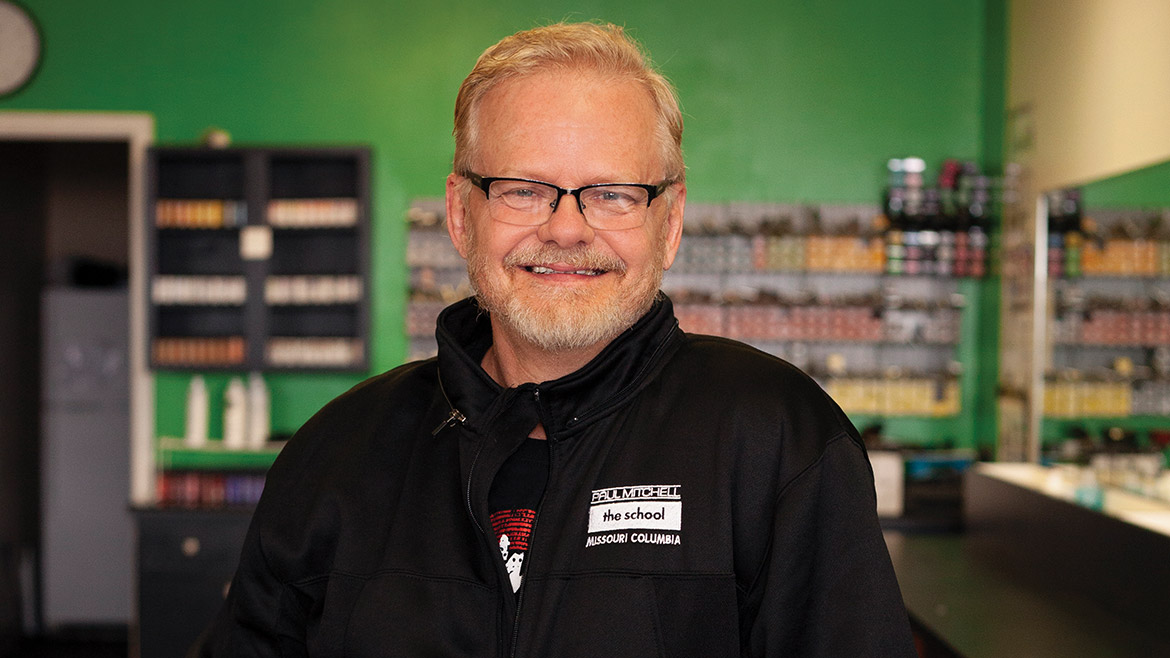 “I don’t want to be bald,” said a customer as she burst into tears during her hair appointment with Eddie Davis, co-owner and director of Columbia’s Paul Mitchell School. She explained to Davis that she had recently received a cancer diagnosis. Moved by compassion, Davis told her to order the nicest-looking wig she could find and then come back to see him. Much was out of her control, but her hair didn’t have to be one of those things.

When the customer returned, every mirror was covered and every staff member wore a hat. Davis shaved her hair off and placed the wig on; the customer never had to see herself bald.

“We get to connect with people on such a personal level and become part of their lives,” says Davis. “We do their hair in high school, for weddings, for their kids, a baby’s first haircut, all the way to their funerals.”

It is compassion and connection that Davis, who helped open the school in 2014, hopes to impart on his students, not just styling and coloring techniques. And that message seems to be getting through.

One graduate works at a local barber shop and sets aside several days each month to do hair for the homeless. Classmates put on a bake sale for a fellow student who had to take a medical leave of absence. Others hosted a beauty and makeover day for victims of domestic abuse.

On the first day of school, students are required to take an online assessment to pinpoint their best learning style: verbal, linguistic, spatial, interpersonal, or intrapersonal, to name a few. Teachers are then required to include each student’s primary learning style in their lesson plans.

It is the learning styles test that makes Paul Mitchell schools different from the typical university and other beauty schools, she says.

“Whenever you’re in a traditional mode of going to college, you go into a lecture hall and you go to class and you’re expected to read a textbook and know how to take notes. You’ll make it or won’t,” Moore says. “Everyone is different, so we’ve got to make sure that everyone is hitting every single point in the right way.”

Classrooms are filled with doll heads fixed on tripods where students can practice everything from hair styling to eyelash extensions. “It’s kind of creepy when you first come in because you’re not used to all the doll heads,” Moore says.

Backpacks with brick-heavy books are virtually extinct there, as each Paul Mitchell student now receives an iPad. Davis says the school uses objectives-based curriculum. A typical class might be working on a mannequin and explaining the process to a partner or go onto Pinterest to get ideas for a lookbook — both would be effective ways of learning.

The personalized attention at Paul Mitchell School extends beyond the classroom. They have an entire advisor role dedicated to students’ well-being. Functioning similarly to a high school counselor, the advisor works to prevent students from crashing and burning, Davis says. “It’s a foreign concept in our industry because, typically, cosmetology schools are small and don’t have a lot of staff members,” he says. “It’s one of the things at Paul Mitchell that is one of the best investments we make — to cover the students we have.”

Moore says it’s their upbeat culture that makes Paul Mitchell School different from the rest. They have a positive quote wall, positive influence days, and sticker prizes. Moore says the staff likes to play jokes on one another, and some of her jokes include putting a cutout of Davis’ face on posters of Ryan Gosling that say things like: “Hey girl. You’re doing great on that pedicure. Keep it going.”

“It’s not all work and no play,” Moore says. “You have to make life more of a joke, because it’s too short to not.”

The school has big plans for this year. They’ve outgrown their current space and will move to a new location near the mall this summer.

When the school started, they had fewer than 20 students. Now, five years later, they are nearing 100 students. Davis says they’re adding a barber program this summer, which he expects to increase enrollment to between 150 and 200 students.

Paul Mitchell School opens their Columbia location on the northeast side of town.

The school puts up a large Paul Mitchell sign on their building.

The schools add iPads for every student to use.

The school finds a new location close to the Columbia Mall.

The estimated date for the opening of a new location and start of the barber program.