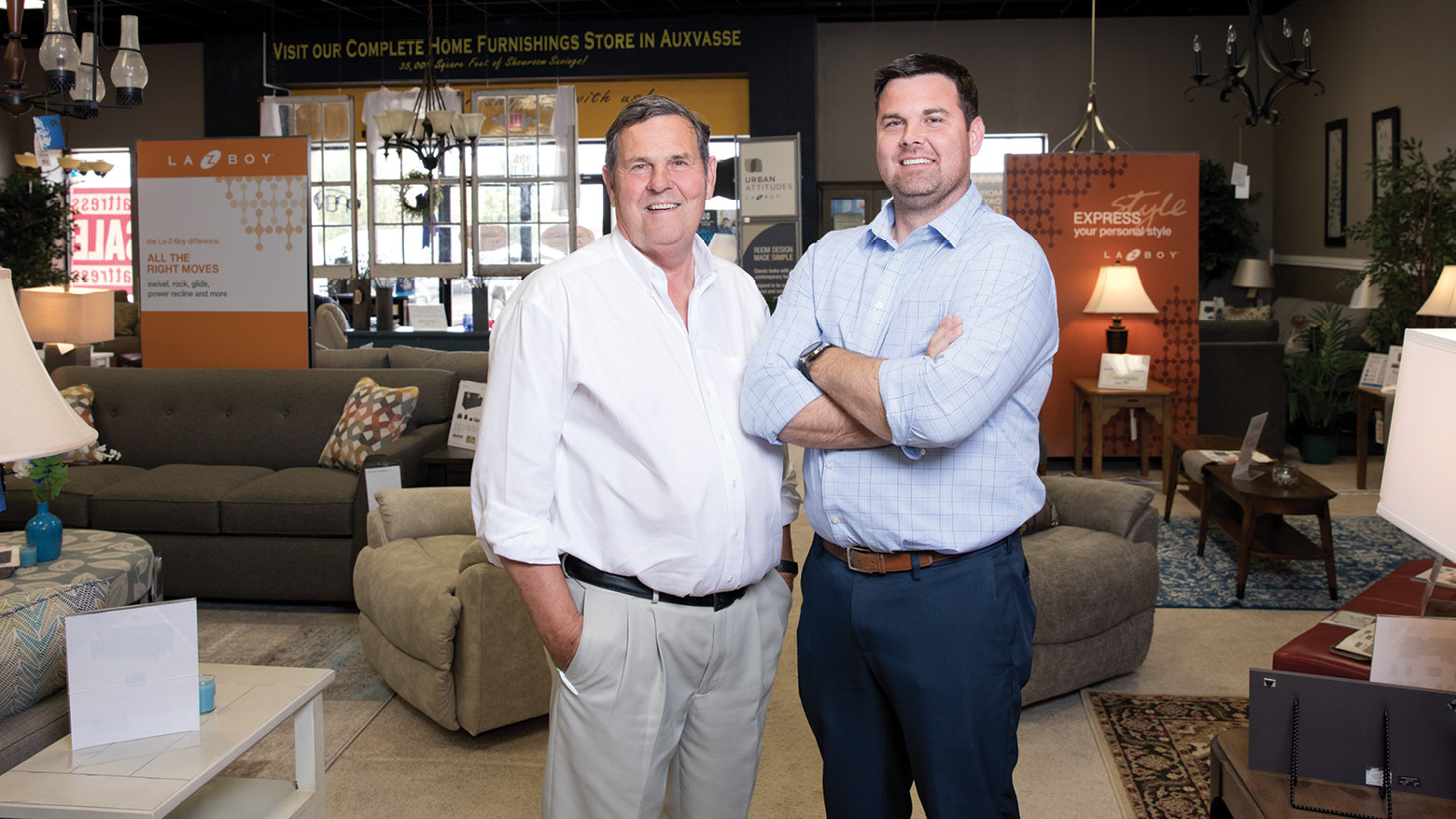 George Baumgartner was a jack-of-all-trades in the truest sense: He opened a gas station with his father, Emmett, added towing and taxi services, started a restaurant next to the gas station, and sold the first television sets in the area. But after an 18-wheeler drove into the front of their restaurant, George Baumgartner chose a new business venture. In 1949, he opened Baumgartner’s Furniture in Auxvasse, Missouri.

The first store in Auxvasse sat on the corner at a four-way stop near Highway 54. The store had three levels, and if customers wanted bedroom or dining room furniture, they’d have to head upstairs, which didn’t have heat or air conditioning. They outgrew the space and bought three different buildings nearby, so if customers came in looking for something like end tables, a staff member would walk them over to the correct building.

George’s son, Alan, says his dad was down to earth and wasn’t afraid to take a chance. “He went for the big lines,” he says. “They thought, ‘You’re too small of a town,’ but he showed that no, it wasn’t.”

Those chances he took have been paying off. Decades later, they would add their Columbia location, and this year, they’re celebrating 70 years in business.

Alan is the owner, but he isn’t the hands-off type. Growing up, he saw firsthand the work of his dad, George; his uncle, Bob; and his grandpa, Emmett. Alan has been working full-time at the store for 45 years. Now he’s working with his son, Jake, and still does just about everything, from supporting his sales staff to unloading trucks. “You get right in there with your employees,” Alan says. “That’s the way we were brought up.”

Jake, who serves as president, has been at the store as long as he can remember, but he started full-time in 2004. He played hide-and-seek in the store as a child and now his two young sons do the same. Though he and his dad, Alan, do mostly the same type of things, Jake says they complement each other. It’s a small business, so they do what needs to be done, Jake says. Alan says he’s more of the support person while Jake handles technology, bookkeeping, and ordering.

Most of Alan’s and Jake’s lives are within about a one-mile radius of the business. They’re next door neighbors and live about a mile from the store. Alan lives with his wife, two daughters, and grandson, and Jake is a door away with his family. His sister delivers the mail for the store every day.

Although the business has been around for decades, it’s still small, with around a dozen employees between both stores. Jake says the store has a “homey” feel, and Alan says big stores look different than Baumgartner’s. “If a customer wants to talk to me or my son, we’re always available,” he says. “There are very few times that a customer leaves without me thanking them.”

A woman who’d worked for the store for more than three decades recently retired, and Alan says she dropped by the store because she missed it and wanted to see how things were going. “People would come in just for her,” he says. “She became just like a sister.”

Customer service is the best advertisement, Jake says. Last year, a customer came in and shared that she had cancer and recently underwent a double mastectomy. As a result of her treatment, she needed a lift chair for her home. Jake says it was nice to know what she was going through and to be able to deliver the chair to her that same day.

Chris Boelter has worked for 20 years at the Columbia location as store manager. She had previously worked at a local newspaper in Mexico, Missouri, where she got to know the Baumgartners as an advertising client, and she says her relationship with the company blossomed from there. “I don’t think we’d be around for 70 years if we didn’t treat our customers right,” she says.

The business is family-focused and generational, and so is the store’s reputation. Boelter says they’re not about selling customers items and never talking again; they’re here after the sale, too. “At big box stores, you don’t get that,” she says. “They say they will, but then they’ll give you an 800 number to call.”

Alan says children see the good quality of the Baumgartner’s furniture that their parents bought and want to do the same when they need to furnish their homes. “I think our name has been out there enough that if something’s not right, people know the Baumgartners will make it right,” Alan says.

1977: The store moves to a new location in Auxvasse to expand.

2009: The family expands the Columbia store to sell mattresses and La-Z-Boy galleries.

2015: Baumgartner’s moves to its current location in Columbia.

2019: The store celebrates their 70-year anniversary.