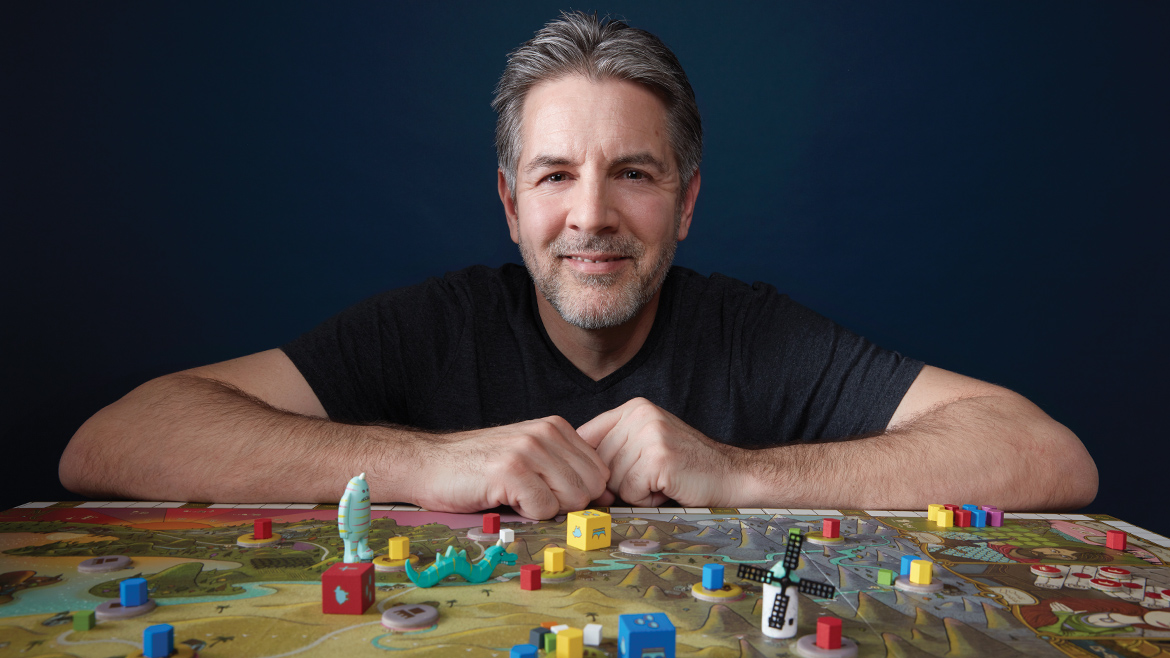 What’s new with Mark Swanson’s Euro-style board game, “Feudum”? In the summer of 2016, CBT caught up with MU professor Mark Swanson to discuss his dream of creating a board game of his own. Two years have passed, and not only has his dream come to fruition; it’s becoming a worldwide phenomenon.

While exciting, this isn’t at all surprising to anyone who has listened to Swanson talk about his game, “Feudum.” After a brief discussion about the game’s past, present, and future, you come away feeling energized and inspired by Swanson’s passion and innovation.

“Feudum” is a so-called Euro-style board game. “Eurostyle, or German, games are an emerging market in the United States,” says Swanson. “People know what ‘Settlers of Catan’ is, but they don’t necessarily understand that it’s part of the Euro or German board game genre. There’s a whole world out there. What I’ve done is create a niche game within a niche. I’m squarely inside the Euro-game universe, but I’ve created a ‘heavy Euro.’ It’s more complex than a typical Euro.”

“Feudum” is not a game for beginners. It is a game requiring well-thought-out tactics and intellect to win with no lucky spins or rolls to help you out of a bad situation. “I’m not saying it’s complicated,” adds Swanson. “I play with my 13-year-old daughter, who beat me once, but you have to appreciate strategy and enjoy the mental acrobatics that come with a strategy game.”

Set in a medieval countryside, the game sees two to five players take their turns vying for power over the land. Each turn includes four actions, which are used to gain points through strategic moves such as farming, taxing, fighting, etc. The sheer number of options ensures constant varying gameplay and the need for your best-fitting thinking cap — you’ll never play the same game twice.

We’ve all heard it: You have to have money to make money. This is the starting point for any entrepreneur, including Swanson. “Typically, an entrepreneur is limited to cash on hand, taking out a bank loan, or seeking out venture capital, say from an angel investor,” says Swanson. “The problem with investors is that you have to give a piece of your company away.”

This was a major sticking point for Swanson. To avoid giving up sole ownership of “Feudum,” he created a Kickstarter campaign. (Board games are one of Kickstarter’s
most common projects). “Of course, I still needed some cash to fund the creation of the Kickstarter campaign, which involved art and animation,” he says. “I actually took out a home equity line of credit, which I’ve since paid off.”

After two years and a ton of online support, “Feudum” has grossed nearly $1 million through Kickstarter and, almost more excitingly, worldwide localization. “It’s funny that now, I don’t have to do a lot of the selling of my game,” says Swanson. “Once the game achieves a certain level of notoriety, people come to you.”

This brings us to “Feudum” today. Due to the game’s overwhelming support (fans on Board Game Geek, a website dedicated to all things board games, are calling “Feudum” a G.O.A.T. — greatest of all time), it’s now being offered in three separate trilingual versions: English, German, and French; Chinese, Spanish, and Italian; and Russian, Portuguese, and Dutch. “I’ve recently signed a contract with a Korean publisher called Angry Lion Games to localize the game in Korea,” Swanson adds. “I’m currently working on a Polish partnership, as well.”

These translations are due to his localization contracts with foreign game publishers such as Maldito Games (Spain), Ghenos Games (Italy), Hobby Mind (China), Moroz/Crowd (Russia), Corax Games (Germany), and Ludofy (Brazil), as well as work with crowdfunding sites from China (Modian) and Germany (Spieleschmiede).

A major part of this globalization is the ever-expanding and ever-changing nature of the game. The original game alone has a multitude of options and ways to win, and when you add in the multiple expansion packs (“Windmills & Catapults,” a sixth player expansion; “Seals & Sirens,” a seafaring expansion; “Alter Ego,” a customizable deck expansion; “Squirrels & Conifers,” a colorblind-accessible version; and “Queen’s Army,” a single-player variant), the possibilities are endless.

“Recently, I partnered with 3D modeler Scott Ryan and miniatures painter Bruce Monson to develop artisan versions of some of the pieces in the game, namely three-dimensional vessels and castles,” says Swanson. “After seeing the potential, I decided to unveil these upgrades in a Kickstarter campaign in early 2019 in a mini expansion called ‘Feudum: Rudders & Ramparts.’ The deluxe components may be used to play a military variant of the game or be enjoyed solely for their beauty.”

Something really exciting for board game enthusiasts today are the many ways to play digitally. “Feudum” is available to play on Tabletopia, STEAM, and Tabletop Simulator (from Berserk Games), which is currently creating custom downloadable content for the game.

With these expansions and new opportunities, Swanson isn’t slowing down. In fact, he has another game in the works, but in the very early stages.

“‘Feudum’ used several mechanics such as action programming and area control, but I’m developing a new game that uses another one of my favorite mechanics called worker placement,” he says. “‘Feudum’ was set in medieval times, but this one will take place during the late 1800s in the Pacific Northwest in the United States. I don’t want to reveal any details just yet, but, like ‘Feudum,’ it will feature a working economy. I’m partial to games that involve planning and resource management.”

While this new game is in the works, Swanson is still working on exciting developments for “Feudum.” “The thing that I’m most excited about is the lengthy discussions I’ve had with a German app development company named Digidiced who have already programmed AI for several top-selling tabletop strategy games turned apps, like ‘Terra Mystica’ and the two-player version of ‘Agricola,’” says Swanson. “They are taking a serious look at turning ‘Feudum’ into an app in 2019. What’s fascinating about this is that their AI programmer is faced with programming games that are infinitely more complex than, say, chess or go [two other notable strategy games].” For instance, a spot on a go board can only exist in three states (white stone, black stone, or empty), whereas a hex on Terra Mystica’s map can have 55 different states. Sophisticated AI programs have outplayed human players in chess and go for years, but now the challenge is to simulate human-like play in more modern Euro games like “Settlers of Catan,” “Terra Mystica,” and — possibly — “Feudum.”