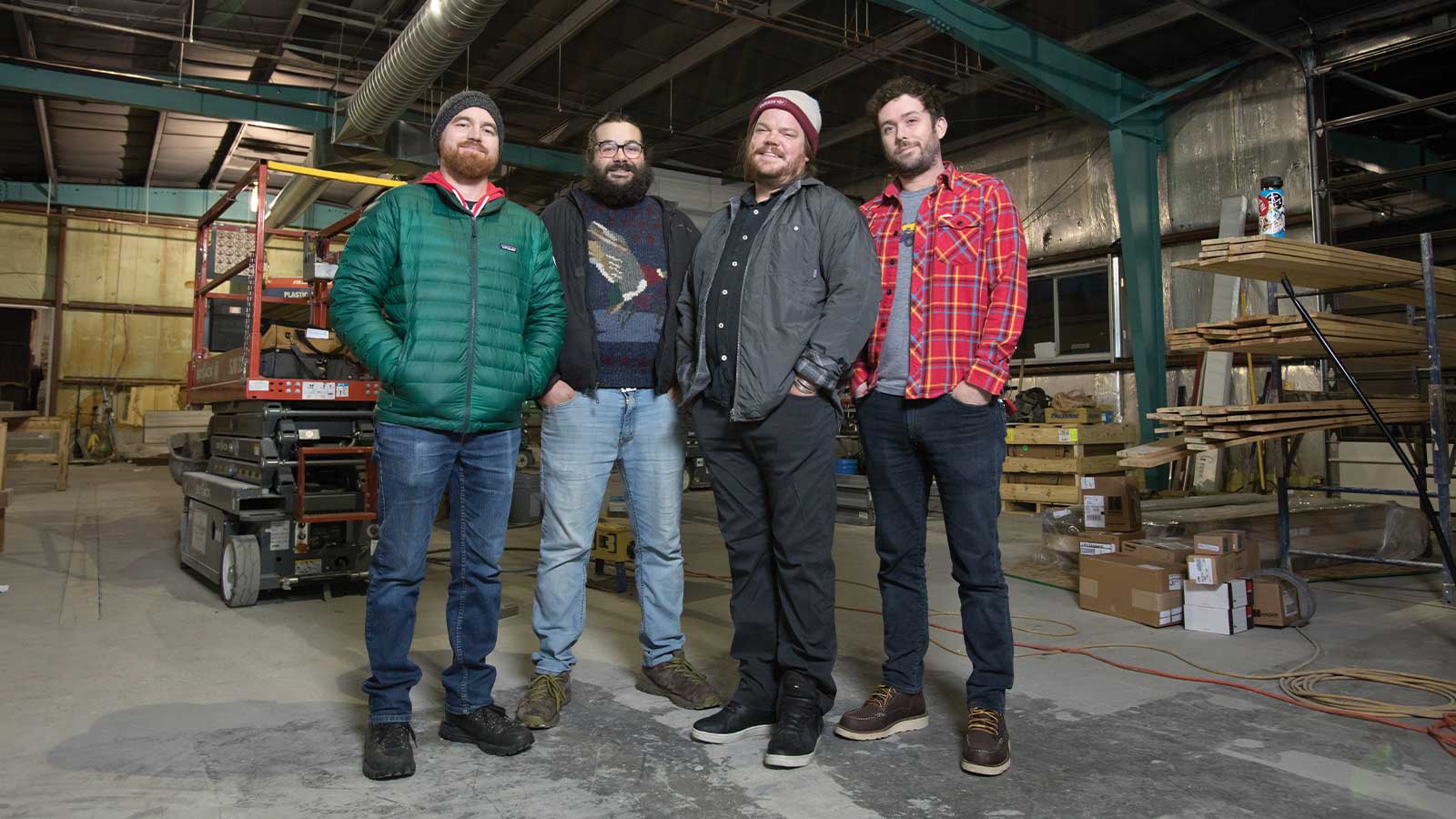 The Logboat crew expands into cider and more in 2020.

Logboat Brewing Co. is certainly creating a buzz in more ways than one.

It’s official — the three co-founders and their head brewer will be opening a new brewery and taproom location in Columbia.

“We wouldn’t be where we are without the support of Columbians,” says Tyson Hunt, Logboat co-founder and CEO. “This city and the citizens around Columbia, central Missouri, and the state of Missouri have been incredibly supportive of us and have given us the confidence to move forward with this expansion.”

The Space
“When searching for a new location, one of the first things we looked for was an open floor plan in an industrial setting with room to grow around it,” says Tyson. “There isn’t a ton of empty warehouse space available in Columbia, so we couldn’t be too picky, and we certainly wanted to keep the new location as close to Logboat as possible.”

The new facility will be located at 604 Nebraska Ave., east of the AMF bowling alley and north of The Business Loop. Thus far, the new space is envisioned to be a home for Logboat’s brand-new cider company, Waves Cider Co., as well as an expansion for Logboat’s wood-aged and sour beer production.

“The name derived from a culmination of music, space, river adventures, and trips to the Pacific Northwest over the past decade,” says Andrew. “Waves will be a new space full of artistic expression in the realms of traditional cider using apples from all over the Midwest, eventually honing in on as many Missouri apple varieties as the lands allow.”

Tyson credits the re-vitalization of The Loop as a major determining factor in Logboat’s desire to join the 170-plus businesses on this bustling corridor.

“The work that Carrie Gartner and The Loop CID Board are putting in is very exciting for our city,” says Tyson. “We are thrilled to help bring further attention to not only the existing businesses on The Loop, but to the future possibilities that exist here for our community.”

The Logboat crew hopes to have a majority of the renovations completed before the end of 2019 and open the space up to the public sometime in early 2020.

“The production area will be very similar to what our Fay Street facility looks like, but with fewer tanks and better viewing,” says Andrew. “There will be a tasting room for hosting events with an extended patio. And the sour [beer] room will be tucked away, accessible only for tours and private events.”

Grove Construction is the general contractor for the building project. Simon Oswald Architecture is acting as the architecture firm and has subbed out work to numerous local businesses to help get the space ready.

“The space certainly has a unique feel to it, and when we all walked into it, we immediately knew that it was the right building and location for our next adventure,” says Tyson. “Not only does it provide us with the operational demands of a manufacturing facility for craft beverages, but it provides us with a lot of room to grow into new and exciting possibilities.”

In addition to turning to local resources for the design and construction of the space, Tyson says that they “hope to utilize the expertise and creative minds of some of our friends who are artists, sculptors, etcetera to provide a unique and funky vibe to the space.”

The Inspiration
According to the co-founders, sour beer and wood-aged beers have been a frequent request from Logboat customers since the brewery opened in 2014. A major factor in the crew’s inspiration for the new location is to create beverages, such as these specialty beers, that they cannot currently make on Fay Street.

“We’re long overdue to create something that’s gluten-free, and over the past few years, we’ve discovered a passion for cider,” says Judson. “I think we’ve all wanted to do something like this since day one. It has taken a little longer than expected to get here, but we wanted to make sure that we do it right.”

Catering to all potential customers — and, in fact, all co-founders — has indeed been a major inspiration for the expansion. Judson hasn’t been able to consume beer since he found out he had severe allergies to wheat and barley.

“It was pretty devastating to discover how bad my food allergies were, but it also opened our eyes to so many different avenues of food and beverage,” says Judson. “To say I’m excited about producing ciders is an understatement.”

Judson’s allergy has sparked a great deal of support and excitement in his co-conspirators — and in their palates.

“What I’m most looking forward to is still a secret!” exclaims Andrew. “But with Judson’s allergy, I’ve been introduced to this entire new world of flavor through apples and pears that I never dreamed I’d love so much. And I’m so excited to see us produce something that he can actually consume without feeling terrible.”

The Goods
“The philosophy and process for our beer is focused on balanced flavors with underlying complexity to create a beverage that can be both savored and casually drank at the same time,” says Josh. “That same philosophy will be applied to our cider as well. I feel there’s plenty of space in the market for a quality cider, especially a locally produced option.”

As for the production plans, Josh explains that the expansion is two-fold.

Cider will be produced in its own facility with a focus on year-round offerings of a dry and semi-dry cider in a can and on draft, along with some seasonal releases “sprinkled in.”

“We plan to use locally sourced ingredients to create flavors that reflect the terroir of the region, both in cider and beer, as well as expanding outside the traditional styles and letting our creative selves shine,” says Josh. “I’m excited to attempt traditional-method cider [think champagne] using apples grown in central Missouri. In the coming years, we will be working more closely with local farmers to grow the raw material — fruit, vegetables, grain — for an array of beverages that reflect the flavors and the seasons of the Missouri River valley and its bounty.”

On the beer side of things, oak barrels and tanks will be filled with batches destined for fermentation and long-term aging with wild yeast and bacteria. These beers will age for anywhere from six months to two years before being blended for bottling.

“We hope to offer up these sour beer releases at multiple times throughout the year,” says Josh. “The expansion is more about variety than it is about larger volume. It’s an exploration of flavors that we haven’t shared yet with our fans. The new space is going to provide opportunity for near endless possibilities for new flavors and styles, and I’m thrilled to have a playground to learn new techniques and processes.”

Of course, new technique will take time, but as Judson says, “Slow and steady has been our mantra since day one.”

“There will be a learning curve for all of us when it comes to sour beer, gluten-free offerings, and cider in particular,” adds Andrew. “Developing a wood-aged beer program and diversifying products in our new facility is a vision that will soon be realized, and it will take some time to get that program at a level we’re all entirely satisfied with.”

Tyson is already envisioning and anticipating walking through stacks of barrels and pulling nails on various barrels filled with wild beers.

“The wood-aged and sour beer projects for Logboat are something we’ve wanted to expand upon since we opened the brewery, and to get to watch Josh and our creative brewers put together some wonderful new beer projects will be awesome,” says Tyson. “Overall, having a creative space to allow our artists an opportunity to experiment with new beverages is something I’m very excited about.”

The Distribution
With so much more production space, hopeful beerheads and ciderheads “abroad” may think that the brewery would potentially expand beyond state lines. However, the crew emphasizes that the current long-term goal is for Logboat to create enough beer to cover the entire state of Missouri.

“Our focus will continue to be creating the best possible beverages we can while offering fun, creative, and social experiences,” says Tyson.

Andrew reiterates that the efforts will be focused inward rather than outward.
“This new space is not as much about widening distribution as it is about creating new pathways for us to explore outside of our comfort zone,” says Andrew.
“Working toward statewide distribution and doing it in a way that is true to our values is important to all of us. We are in no rush.”

Andrew adds that the goal is to eventually distribute the cider locally, but it’s hard to gauge how much will actually go out in the beginning.

“We’ll begin with a limited amount of product for ciders,” says Andrew. “Hopefully we’ll be able to have a few limited bottle releases our first year with both sours and ciders. We’ll definitely have some specialty bottles in a larger format. It all depends on the timing of when things come around to tasting great. We’re crossing our fingers for having some product we’re all happy with next year.”

The Future
Tyson’s vision for Logboat is to continue working hard at making the best beer possible while strategically growing their distribution footprint to include all 114 counties in “the great state of Missouri.”

“I foresee a lot of innovation and fun, exciting new projects in the future, and I’m excited to see what our crew comes up with next in the beverage world,” says Tyson. “I want to continue to provide high-quality jobs and a working environment that is both challenging and rewarding and continues to provide a platform for us to give back to our community. Forming deeper connections within the communities where we distribute our products is something that I look forward to as well.”

Tyson believes that there is a trust that exists between Logboat and the Missourians that allows Logboat to diversify their offerings and “explore the ever-changing landscape of craft beverages.”

“We owe it to Missourians and to ourselves to keep exploring the craft beverage space,” says Tyson, “and we couldn’t be more excited to do so right here in the heart of Columbia.”