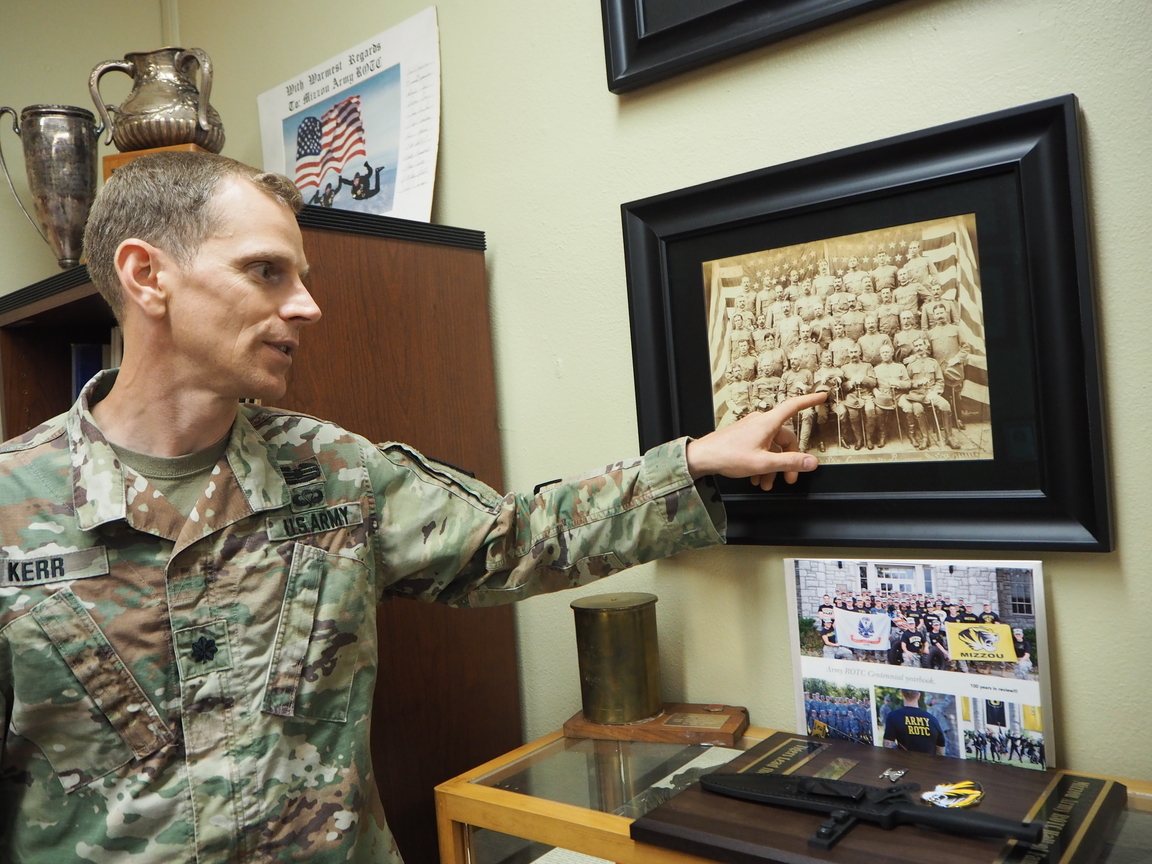 Land-grant institutions like MU once required all students to study military science. Today, the Reserve Officers’ Training Corps is voluntary, but many students driven to excel now attend the program for its financial incentives and leadership training even if the cadets plan on non-military careers.
ROTC graduates are in demand for their leadership skills, notes Lt. Col. Gary Kerr, professor of Military Science and Leadership. He said ROTC alumni are the “people who are running the nation.”
The ROTC scholarship program is the largest in the nation, with $2 million distributed last year at MU alone, Kerr said. Merit-based scholarships can cover up to full tuition costs, books, and fees for 15 credit hours per semester. Cadets may serve in the Army Reserve or National Guard, earning pay and benefits in addition to ROTC allowances.
MU provides facilities at Crowder Hall and funds two employees who manage affairs with the university, while the Army pays Kerr and other instructors.

A Commitment to Serve

“I don’t produce a degree; I produce a commission,” Kerr said of the four-year program. The first two years of the program are available to any MU student, but advanced training and basic students on Army scholarship need a contract with the Army and a commitment to serve in order to complete all four years.
During the 2018-2019 school year, the Tiger Battalion, as the cadet unit is known, consisted of 105 cadets, 13 in traditional enrollment, 72 in contracts, and 20 pending contracts. Twenty-three were women and 26 received commissions. Kerr reported a 99 percent program completion rate among contracted cadets.
The freshmen and sophomore years begin with an intense civilian education of personal development, life skills, training in leadership skills and styles, military tactics, fitness, and skills such as writing and briefing senior officers.
For those who want to go beyond basic and complete ROTC training in two years, they begin their junior year with a 28-day advanced training camp at Ft. Knox, Kentucky. Students receive assessments of their skills as infantry leaders, then return to MU for more training in Army values, discipline, interpersonal tact, sound judgment, innovation, warrior/service ethos, and military and professional bearing.

Students receive scores based on their GPA and field assessments. An Army board reviews student records and finds where in the Army’s 18 branches graduates might fit the best. Results of the board review come in October of the students’ senior year.
Seniors serve as staff members, performing as they might in a real-world setting. “The senior year is my time to teach them to be an officer,” Kerr said.
Graduate Emily Campbell became the first female armor officer in the Oregon National Guard. Another graduate, Becca Moss, hiked 26 miles in 5 hours in full Army gear, finishing first in a nationwide competition at White Sands. More famous graduates include Lt. Gen. Jerome H. Granrud, former commander of the U.S. forces in Japan and Pittsburgh Steelers linebacker Charles “Andy” Russell.