In 1937, when the United States was still recovering from a post-Depression economy, the federal government instituted the Housing Act of 1937 to authorize public housing authorities at the state level. The purpose of the PHAs was twofold. Much like the 2009 American Recovery and Reinvestment Act, the initial primary purpose was to create jobs and stimulate the economy through the construction of public housing projects. The second goal was to provide affordable housing.

However, nearly 40 years later, in 1974, the federal government and social service agencies determined the real barrier for low-income families to afford housing was the debilitatingly high percentage of their income they were paying in housing costs.

Since its launch nearly 40 years ago, the term “Section 8” has become synonymous with all types of public housing. Although there are several government-assisted housing programs, only one is accurately called Section 8.

What is the Housing Choice Voucher Program?

Once a household qualifies for and receives a Housing Choice Voucher, that household is responsible for shopping the vouchers around to find housing from landlords willing to accept them.

“We let the private sector manage the housing for the voucher program,” Steinhaus says.

Eligibility for Housing Choice Vouchers is based on several criteria; chief among them is a household’s net income. That net income is further adjusted by certain deductions based on the number of children, elderly and disabled people in the household. The goal of the tenant-based vouchers is that eligible families only pay 30 percent of their income on housing, and the remaining rent is paid with government funds.

Because the deductions are given to households that include children, the elderly or the disabled, proponents of tenant-based Section 8 housing claim it is aimed at households that will likely remain low income, especially households headed by a disabled person or an elderly person, thereby providing these at-risk households with long-term housing stability.

Proof has born this out as the voucher waiting list is astronomical across the nation. Most states are not even adding names to the waiting list — and haven’t for years — proving that many of the Housing Choice Voucher tenants remain in the program long term. According to Steinhaus, there are currently 636 households on the CHA’s waiting list; however, that number has been significantly higher the past few years.

“We opened our HCV waiting list for one week in September 2012 and took over 1,500 applications,” Steinhaus says. “We closed that waiting list after one week because of the large number of applicants. We don’t expect to open our waiting list again until some time in mid- to late 2015.”

The local Housing Choice Voucher population, according to Steinhaus, is made up of 84.4 percent female heads of household, with 37 percent of those also having a disability. Families with children make up 61 percent of the households. Sixty-five percent are African-American, and 34 percent are white.

The CHA reports the current average household income for HCV participants is $12,854. The average rent paid per household/tenant is $149 per month. The Average Housing Assistance Payment or the portion subsidized by the government is $448 per month. 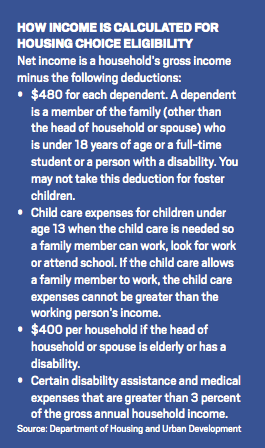 Who are the landlords?

Gene Stephenson has been a local landlord since 1987 and now owns more than 60 properties, primarily single-family, duplexes and fourplexes in several Columbia neighborhoods. With the exception of his first year as a landlord, Stephenson has accepted Housing Choice Vouchers. For the past 26 years, Housing Choice Voucher tenants have rented roughly 10 percent of his properties.

Unlike other communities, Columbia’s rental price points are heavily influenced by a large student population. According to Stephenson, he initially agreed to be a Section 8 landlord because he could ask more in monthly rent for his rentals that weren’t attractive to students.

“Basically, back then HUD, other than students, were setting the rental prices, and they were more than I could get otherwise,” he says.

According to Steinhaus, “HUD establishes a Fair Market Rent for our area to make sure landlords get paid a fair rent while also ensuring that HUD and CHA pay a fair net no higher than the regular market rent.”

But before a landlord can collect the rent, he or she must agree to other conditions to become a Housing Choice Voucher or Section 8 landlord. These conditions include submitting the rental property to an annual inspection, agreeing to the rental rate dictated by HUD and reporting any suspicious criminal or drug activity to the local housing authority. Stephenson hasn’t found these conditions too cumbersome.

“Once you get going with them [HUD], it’s no problem,” he says. “I already get inspected every three years by the city, and VA loans are way pickier than Section 8. I fix up all my houses. When I get done with the house, I would stay there.” 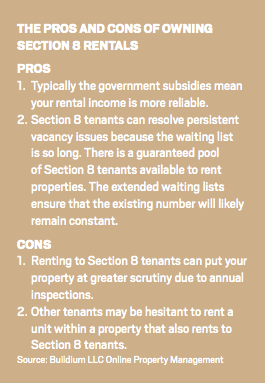 Because he owns so many rentals, Stephenson uses a rental management company called 443-STOP to deal with most of the required paperwork. According to a representative from 443-STOP, who declined to be named, Section 8 rentals comprise about 10 percent of all its clients’ rentals, similar to what Stephenson reports.

Since renting to his first Section 8 tenant more than 25 years ago, Stephenson has not had any Section 8-specific issues. When asked whether he has reported any criminal or drug activity to CHA, Stephenson says: “I have not. I make all my tenants aware that I’m visible, and I don’t condone it, and this goes for all my tenants.”

Despite the bad rap often given to Section 8 tenants, data collected by the CHA paints a different picture.

In 2013, less than 2.7 percent of the households had their assistance terminated as a result of drug-related or criminal activity.

Stephenson says: “Good tenants are good tenants, whether they’re Section 8 or not. Some of my best tenants have been Section 8. … They tend to stick around.”

Steinhaus also wants the community to realize there is an economic benefit to the Housing Choice Voucher Program. “The FY 2015 budget for CHA Housing Assistance payments to local landlords is in excess of $6 million,” he says. “This is rent assistance paid directly to landlords.”

What about other low-income housing complexes?

In addition to the public housing owned and operated by the Columbia Housing Authority, Columbia is also home to several developments spawned by the Missouri Housing Development Commission. These properties are constructed and built by the private sector and are given generous preconstruction tax breaks in return for keeping rents at a reduced level for 20 years. At the end of the 20-year agreement, the rent can revert to market rate, or the owner can substantially improve the property and re-up for another extended period. The Columbia Housing Authority is not affiliated with these types of properties, which are not part of public housing. Locally, such properties include Hanover Place, North Hampton and Lakewood Apartments, Columbia Square and Bethel Ridge.

A fear commonly expressed by many is that aging rental properties will ultimately become Section 8 housing. There are several good reasons this likely won’t happen. First, given that the current federal funding to local housing authorities dwindles every year, it is highly unlikely that Boone County will ever have more than around 1,000 households/tenants in the Housing Choice Voucher Program. Simply put, the supply of housing far exceeds the number of potential Section 8 tenants. Further, according to Steinhaus, no new large public housing complexes are being constructed or purchased by the Columbia Housing Authority. Consequently, it is highly unlikely any aging apartment complexes will become public housing.

In Columbia there are waiting lists for both public housing and the Housing Choice Voucher Program. The federal government isn’t increasing its funding to the local public housing authority, so the pool of publicly assisted renters will not increase.