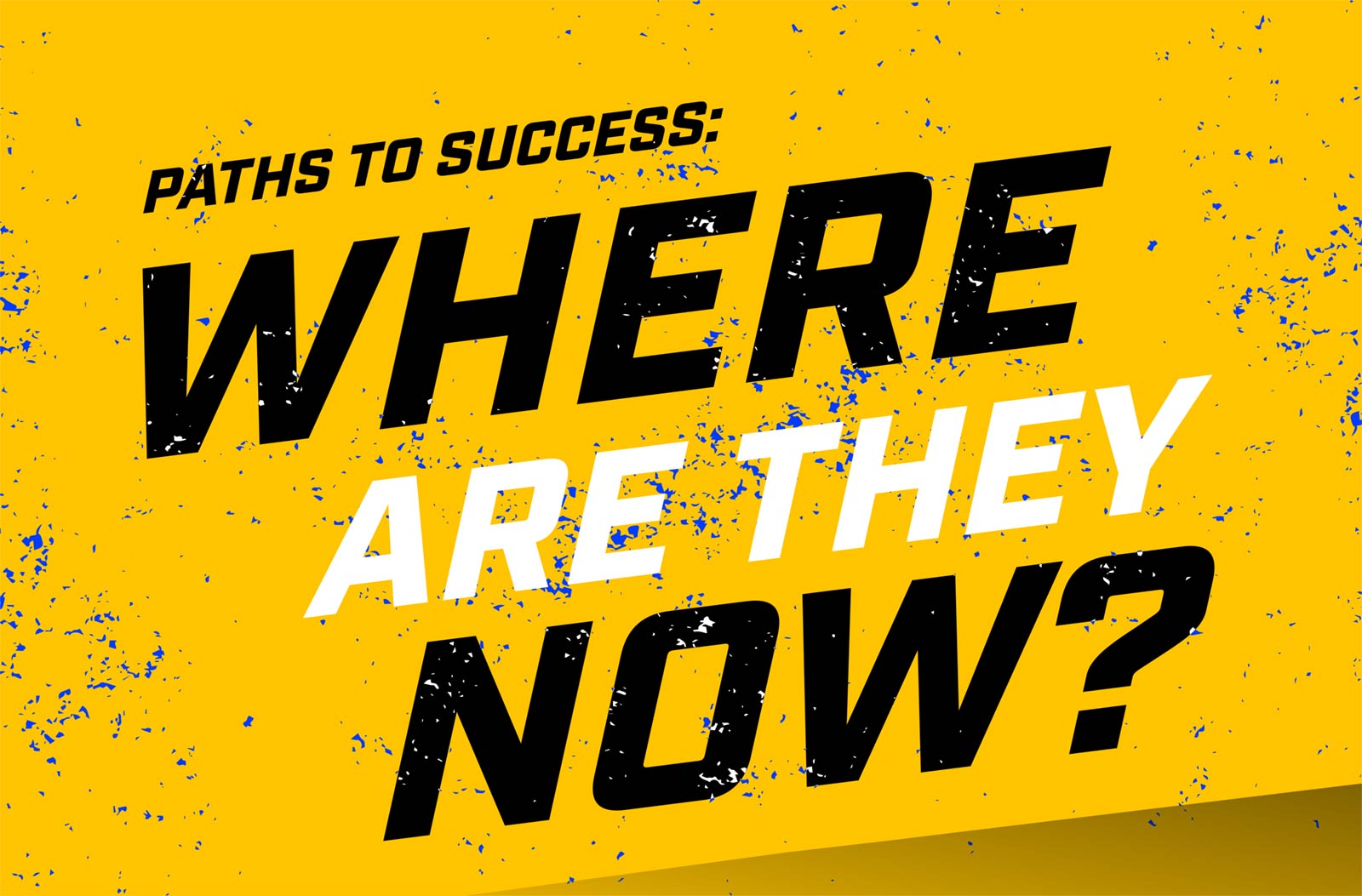 Over the past three decades, the University of Missouri Athletic Department has witnessed significant growth — due in no small part to former Athletic Director Mike Alden, who led the department from 1998 to 2015. The Tigers saw success on and off the field, moving from the Big 12 to the Southeastern Conference, renovating and constructing new facilities, and garnering unprecedented financial support from donors. And as Mizzou Athletics grew and changed, so did the city of Columbia.

We caught up with four former Mizzou Athletics staffers who spent significant years of their career in Columbia under Mike’s leadership. Many have gone on to prestigious positions at other NCAA Division I programs, yet they all cherish their memories of Columbia and what they learned at MU.

Mark Alnutt began his life in Columbia as a freshman walk-on for the Mizzou football team in 1993. The Kansas City native was soon granted a scholarship. After graduating, Mark eventually joined the athletics administration, becoming the associate athletic director from 2006 to 2012.

“To receive an education and play a collegiate sport at the Division I level was something that I thought would never happen, but it did,” Mark says. “I was fortunate to have that walk-on opportunity and even expanded that role to earning a scholarship. So because of my experience as a student-athlete, I wanted to get back into athletics.”

His time at MU proved to be the experience he needed to lead a department of his own — he’s now the athletic director at the University of Buffalo.

Mark says the athletic administration lifestyle can be slightly nomadic, but Columbia remained a constant in his life for many years. His four children were all born in town. Citing the many relationships, both friendly and professional, that he formed while at MU, Mark spoke with a pang of nostalgia in his voice.

“The thing I remember so fondly was having that opportunity to start a family in Columbia,” Mark says. “My wife and I have four kids, and all four were born in Columbia — same doctor. And that’s rare in this profession, to have all your kids born in the same city and have a place to call home.”

When Mark wasn’t involved with the activities of the Mizzou football team or athletic department, you could find him at Cosmo Park coaching youth football for the Columbia Youth Football League — the site of some of his fondest memories. Mike always made sure Mark got off work in time to make after-school practice.

“He’d always let me get out of the office at 5 o’clock so I can get back to the community and coach kids in the sport of football,” Mark says.

Mark credits Mike with the leadership and training that’s allowed him to excel post-Mizzou. Mark has brought newfound success to Buffalo athletics, with the football team cracking the Associated Press Top 25 Poll for the first time this past season.

Laird Veatch launched his career at MU in 1997, becoming the assistant athletics director for development from 2000 to 2002, years that saw major growth for the program. After seeing Gary Pinkel take over the football program from head coach Larry Smith, Laird got a front-row seat as Mike transformed MU into a destination school for Division I student-athletes. Laird’s fundraising activities were imperative to this blossoming era.

“I shared an office with [current Texas A&M athletic director] Ross Bjork and Mr. John Kadlec — Mr. Mizzou,” Laird says. “Between the three of us, it was a very loud office. Talking to a lot of people on the phones back then.”

Laird became the general manager for the Mizzou Sports Properties branch of Learfield Sports in 2003, overseeing multimedia activities in the sports department. The position itself was indicative of the program’s evolution under Mike, which Laird says was visible not just on campus, but in the community, as well.

“We went through a lot of changes and got a lot done,” Laird says. “It was a young and eager staff, and we learned a great deal together and figured out our paths.”

It was a heyday for MU, and Laird was around for those golden years. He fondly recalls evenings at Shiloh Bar and Grill and the longtime Mizzou sports bar Johnny’s Beanery, which closed in 2008. However, he’s less wistful for the heavy traffic on I-70.

“About the only thing that I don’t miss is the semi traffic on I-70 going to Kansas City and St. Louis,” Laird admits. “I spent a lot of time on that highway during my fundraising and development days, traveling to see people across the state. And that’s probably what I miss the most — those relationships and friendships you form with Mizzou fans.”

Like many of Mike’s acolytes, Laird has moved on to continued success and promotions with each career jump. He’s currently athletic director at the University of Memphis, and Laird is quick to credit Mike and his years in Columbia for getting him there.

Sarah Baumgartner filled Laird’s role as Mizzou’s associate athletic director for development, with the Tigers witnessing a significant boost in donor growth and athletic success during her tenure. She also handled sports administration duties for the men’s basketball team during the Tigers’ strong run in the early 2000s. And like Mark and Laird, Sarah gave major props to Mike for laying the foundation for her career in athletics administration.

“Professionally, Mike Alden is a superstar,” Sarah says. “I owe so much of my success and where I’m at in my career to him and his belief in me. My time at MU and the things we got to accomplish and experience from an athletic department and student-athlete standpoint — it was awesome.”

It was during these years that MU transitioned from the Big 12 to the Southeastern Conference, considered by most to be the premier conference in collegiate athletics. Sarah was vital in helping MU financially capitalize on the transition, which not only brought wider exposure to the program but bolstered Columbia’s economy with a sudden influx of tourism from visiting teams and fans.

“I started my career at Mizzou when I was 23 years old, and they were some of the best years of my life,” Sarah says. “I loved living in Columbia and the people that I met.”

For Sarah, these years are best remembered by the family and friends she made, memories forever tied to Columbia. Her favorite restaurants — Bangkok Gardens, CC’s City Broiler, and Addison’s — were the settings for these joyous occasions.

“CC’s City Broiler I still think has the best steak I’ve had anywhere,” Sarah declares. “And I’ve had a lot of great steaks.”

Now, Sarah is the deputy director of athletics at Rutgers University, applying the skills and administrative leadership skills she honed under Mike.

Mario Moccia worked under Mike as Mizzou’s senior associate athletic director during years that overlap with Mark, Laird, and Sarah’s stints in the department. Mario was full of hearty anecdotes about his time in Columbia, which he looks back on fondly.

He recalls one major turning point for both Mizzou, and by extension, Columbia. It came on August 31, 2002, when a redshirt freshman quarterback by the name of Brad Smith led the Tigers to a 33 to 20 upset of Illinois to start the season.

“I just remember thinking after the kickoff — the dome [the then-named Edward Jones Dome, in St. Louis] is packed. I was thinking, ‘Just don’t throw [an interception] to start the game,’” Mario recalls. “And Brad Smith just took us down the field. I tell everybody this going on 20 years now — when we scored that touchdown, it wasn’t this roaring cheer. Sixty thousand people said, ‘Did that just happen?’ Like this weird murmur-buzz.”

There was indeed a buzz in the air. Like Sarah, Mario saw the parallel between Mizzou’s athletic development and the growing community and infrastructure of Columbia. He praised the town for its centrality and the warmth of its inhabitants.

“In my opinion, it’s one of the most underrated cities in the country because it’s a big business hub, [there are] hospitals — plus, it’s a very progressive area,” Mario says. “It’s directly dead center in the middle of the state. You’ve got your government in Jeff City. You can do all your caravans in one day, whether it’s down to Hannibal or Joplin or St. Joseph.”

Like Laird, with whom Mario worked closely, he also remembers going to Shiloh to celebrate the era’s many wins in football, basketball, wrestling, and many other sports.

“It was just a fun time for me,” Mario says. “It’s an unbelievably livable city. You can drive and have whatever cosmopolitan stuff you want in Kansas City and St. Louis and be back at a reasonable hour. You’ve got the three universities and colleges there. Columbia just checks [a lot] of boxes.”

From Mizzou, Mario became the athletic director at Southern
Illinois University, a position he held for nine years before taking on the same role at New Mexico State in 2015, where he resides today.