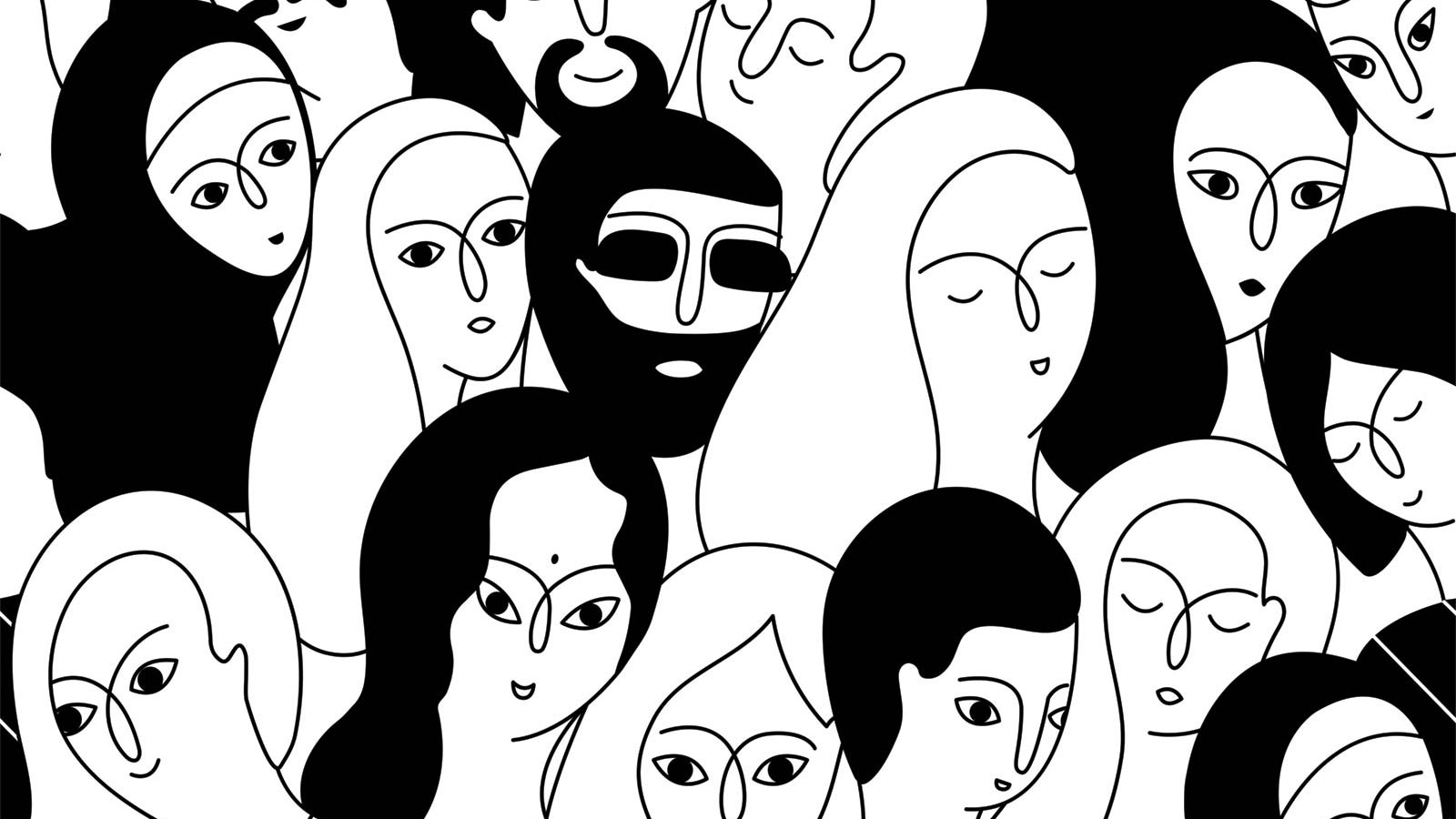 One of the many perks of living in a college town like Columbia is the great diversity — diversity in food, culture, music, and religion. The yearly influx of professors, doctors, and students from every part of the world makes it possible for many faith traditions to thrive in Columbia, from Ba’hai to Hinduism to Christianity, Judaism, Islam, and beyond. This rich tapestry of faith makes Columbia a global community that offers open doors to anyone who is looking for them.

The Lay of the Land

According to the Pew Research Center, 70.6% of Americans identify as Christian (about 36% Protestant and about 20% Catholic). About 23% of Americans are religiously “unaffiliated,” 7% of which are agnostic or atheist, 16% of which say religion is not important to them. Six percent of the U.S. population believes in non-Christian faiths like Judaism (2%), Islam (<1%), Buddhism (<1%), and Hinduism (<1%).

The Pew Research Center details that numbers in Missouri are similar: 77% of Missourians identify as Christian (56% Protestant, 16% Catholic); 3% non-Christian faiths; and 20% unaffiliated (5% agnostic or atheist, and 15% for whom religion is not important). Many of the statistics detail that the average Missouri Christian is a married white woman, without children, between the ages of 30 and 64, with a high school education, who is politically conservative, and makes less than $50,000 a year.

A Look at Christianity

Christian Fellowship Church, located off of Scott Boulevard, is a bible-centric, non-denominational Christian church with a congregation of about 1,300 that formed in 1978 by a small group of mostly college students. One of those founding members is Senior Pastor Phil Schaefer, who came to Columbia from St. Louis to attend MU.

“Family — we’re a spiritual family,” Pastor Phil says about what makes Christian Fellowship the church that it is. “Relationships are at the core of our Christian life. We believe that in order to live out our faith, it has to be done in community. It’s not a solo endeavor. Every church has its own DNA that makes it distinctive. [For Christian Fellowship], it really has been about fellowship. That has been the hallmark of our existence for the last 40 plus years. [That fellowship has been about] the benefits of walking life out together over a long period of time.”

Christian Fellowship offers traditional and contemporary Sunday morning services, as well as a multilingual African service on Sunday afternoons. Many African refugees call Christian Fellowship their spiritual home, which adds to the diversity of the overall congregation. The church offers ministries for children, youth, college students, men, women, and those refugees.

Pastor Phil says that acts of service are a core component to the philosophy at Christian Fellowship. Several Columbia nonprofits were born out of the church, including Love INC and Granny’s House. According to the church’s website, “Just as Jesus looked with compassion on others and was moved to action, our desire is to follow Him in sharing our hearts and time in practical ways to bless our city.”

Just as the church’s congregants find community in the church, the church itself is part of the broader community of Columbia churches.

Like most other churches in Columbia, Christian Fellowship has moved to streaming services and virtual classes during the COVID-19 pandemic. But Pastor Phil reminds us that “there is life beyond pandemic.” He says we are tested in our patience and kindness, but there is hope in making love our aim. Phil points to 1 Corinthians 13, including the line “And now these three remain: faith, hope, and love. But the greatest of these is love.”

A Look at Judaism

While Pastor Phil has lived in Columbia and has been able to observe its growing religious diversity since the 1970s, Rabbi Phil Cohen of Congregation Beth Shalom arrived in Columbia from Greensboro, North Carolina in May, mid-pandemic, to serve as an interim rabbi after longtime rabbi Yossi Feintuch resigned. With a limited view of Columbia as a whole and an understanding of the 145 Jewish families that make up the congregation gained at arm’s length through virtual activities, he has found that many Beth Shalom congregants have an above-average knowledge of the Jewish tradition. He also says that the congregation is very diverse, with most of the members coming from many parts of the country, and that this creates a pluralistic environment that seems to work.

Congregation Beth Shalom was formed in 1974; before that, the practice of Judaism in Columbia was confined to the Hillel Foundation at the University of Missouri, which was formed in 1947. There are a few different movements within Judaism, but Congregation Beth Shalom is a member of the Union of Reform Judaism, which is committed to inclusion instead of exclusion; Reform Jews are committed to the equality of women, who can be ordained as rabbis, and to the full participation of gays and lesbians in all parts of synagogue life, for example.

“The congregation is very much concerned about working toward equality in the state and the nation,” Rabbi Phil says. “I would say that mercy, compassion, and equality are key Jewish values.”

In understanding what the person’s responsibility to God is in the Jewish tradition, Rabbi Phil says, “It’s two-part: There is the act of serving God through prayer and ritual observance to develop a communal and personal connection with God. And it’s the act of serving other people, both Jewish and non-Jewish.”

The act of serving others is known as tikkun olam. At Congregation Beth Shalom, this service takes many forms, such as supporting Loaves and Fishes with meals, an annual coat and blanket drive, donating a “substantial” amount of produce from the CBS’s farm, a partnership with the Newman Center at MU to the Food Bank for Central and Northeast Missouri, making bean soup mixes to benefit the Russell Chapel Food Bank, collections and donations for Room at the Inn, and even adopting a family at Christmas.

A Look at Islam

Islam is one of the world’s largest religions that has a growing community in Columbia. The Islamic Center of Central Missouri, on Fifth Street, is the only mosque in Columbia. The ICCM website says that “The Islamic Center of Central Missouri is home to a very diverse and dynamic community composed of, among others, indigenous Muslims, international students, and immigrants.” It was formed in 1983 and has been mostly closed during the pandemic.

Islam is always fighting a battle of misinformation about what it stands for and believes in. Presumably to this end, the ICCM website makes these three statements:

“Muslims follow a religion of peace, mercy, and forgiveness that should not be associated with acts of violence against the innocent.

“‘Jihad’ does not mean ‘holy war.’ Jihad means to strive, struggle, and exert effort. It is a central and broad Islamic concept that includes struggle against evil inclinations within oneself, struggle to improve the quality of life in society, struggle in the battlefield for self-defense (e.g., having a standing army for national defense), or fighting against tyranny or oppression.

”Under Islamic law, women have always had the right to own property, receive an education, and otherwise take part in community life. Men and women are to be respected equally. The Islamic rules for modest dress apply to both women and men equally. (Men cannot expose certain parts of their bodies, wear gold or silk, etc.) If a particular society oppresses women, it does so in spite of Islam, not because of it.”

The publication reached out to leaders in Columbia‘s Islamic community, but no response came in time to make the publication date. Nevertheless, we would be remiss to exclude one of the world’s largest religions.