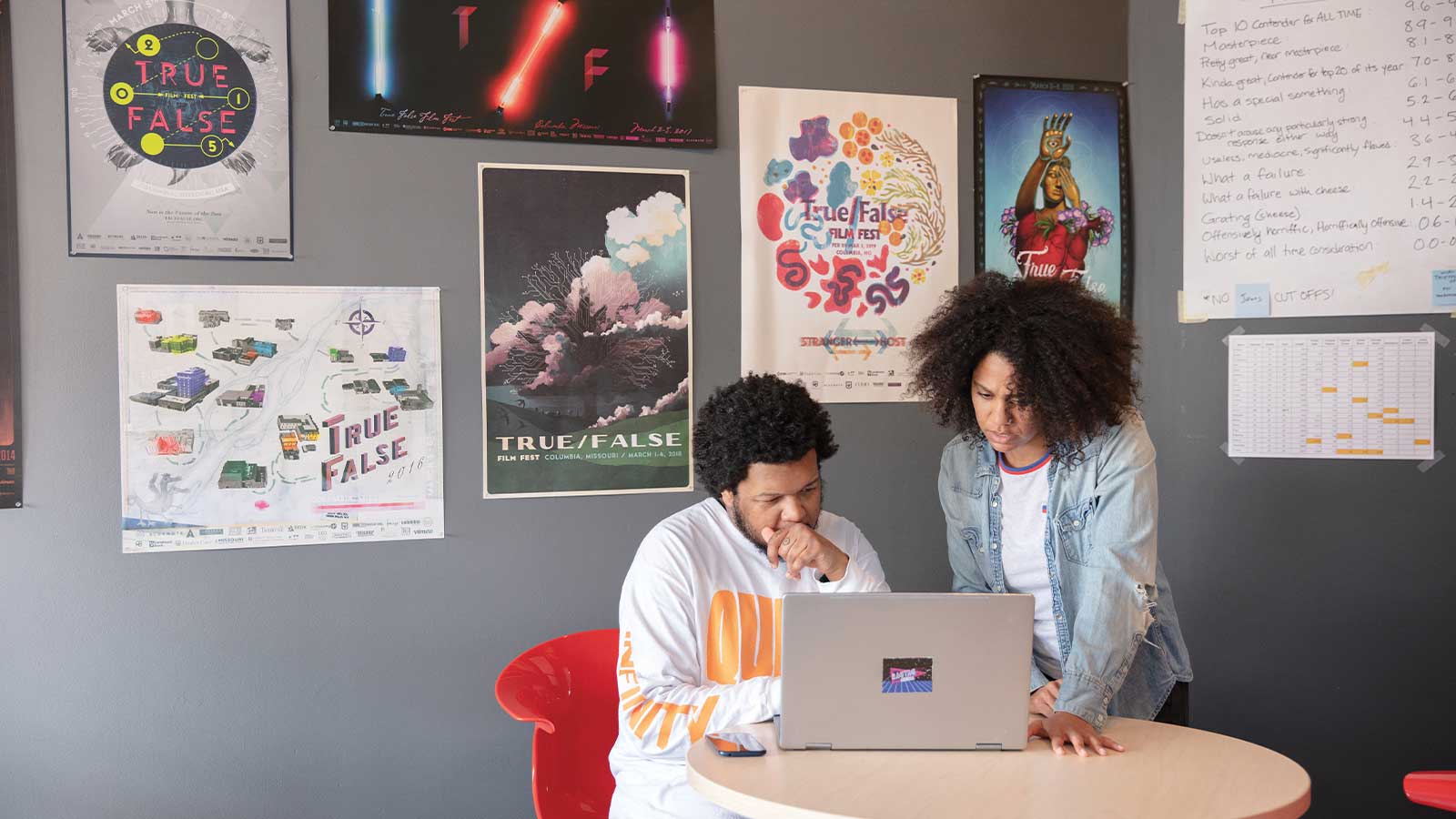 Meet four people who have settled in as true Columbians — at least for the short-term.

What is it that makes COMO a place to call home? Is it a favorite dish at a favorite restaurant, bringing back those taste memories? A fall bike ride on the MKT trail? Or a weekend celebrating creativity at the True/False Film Festival?

Some of us have grown up here and lived here our entire lives, while others have adopted the town as their own more recently, whether for family or a career or something else. Whatever your reason for living here, it’s ultimately the welcoming people and the sense of community that make it feel like the best place to live, work, and play.

Meet four people who live in Columbia on a short-term basis for their work as film programmers, a nurse, and an artist. They’re calling Columbia home — for now — and are happy to share their thoughts on how they experience our city and what makes it feel welcoming.

The Fest Programmers
As part of the True/False team, programmers Jeanelle Augustin and Amir George encourage artists to come to Columbia for the film festival and serve as ambassadors.

Amir has been a programmer for some time, accustomed to traveling to different places for stints, but he had never been to Columbia when he was first approached by True/False. “It sounded like a fun opportunity,” he says. A Chicago native, he immediately started his research by googling Columbia. “I didn’t realize the impact and the presence that True/False has in this town,” he says. “I think being a part of that is cool.”

Jeanelle, who previously worked for the Sundance Film Festival, had attended True/False before and knew she was comfortable with the size and feel of Columbia. “I found it really charming during the festival,” she says. “It was cool how there were art installations that activated different spaces. I loved the alleys. I knew a little more about what I was getting myself into,” she laughs.

While they’re in Columbia, both Amir and Jeanelle stay in the homes of families who are friends of the festival. It’s a fun way for them to get to know people who not only live here, but who also are true moviegoers who can engage in conversations about films.

They’ve traveled with the team to Amsterdam and Japan in search of the best films and new artists. “We try to include the best films from around the world,” Jeanelle says. “But sometimes those artists don’t know us or are just beginning their career or think they wouldn’t get in, so they don’t apply. We’re strategic about where we go so we can engage artists who may be less connected to the industry.”

When they’re not working or watching films, both enjoy riding bikes on Columbia’s trails. Amir loves hanging out at Uprise Bakery and seeing shows at Café Berlin. Jeanelle is a fan of Moon Yoga and loves the healthy, clean food at Nourish Café.

Jeanelle finds plenty to do through Columbia’s art scene. “Columbia is a super vibrant arts community,” she says. “There’s something to do all the time, from First Fridays to Living Windows to the cinema and restaurant week. You have residents pitching in and doing funky extracurricular activities, and nothing feels exclusive here.”

For Amir, nothing beats the experience of the True/False festival. “It’s the greatest party in town,” he says. “We came from other places, from around the world, just to bring films to exhibit here in Columbia. It’s an important cultural experience.”

The Artist in Residence
Alix Lambert grew up in Washington, D.C., and moved to New York when she was 17, where she’s lived since then. A documentary filmmaker, writer, and visual artist, she’s also lived in Los Angeles, where she wrote for the television series “Deadwood,” among others, and has spent residencies in places like Florida and North Carolina.

Alix first came to Columbia for a few days last year to judge a student competition at MU, and now she’s here as the university’s inaugural artist in residence, a program recently launched by Chancellor Alexander Cartwright to invite established and emerging artists to celebrate the arts and cultivate creativity across disciplines. “I have taught at a lot of schools and they don’t always support the arts like MU has, especially with the interdisciplinary approach,” Alix says. “That was really exciting to me. I like Columbia. It’s a comfortable place to be.”

Columbia’s support of the arts scene is important to Alix. “Talking about True/False and looking at all the bookstores and theaters here, I feel there’s an embrace of the arts and journalism. That’s an important part of the community to me, wherever I’m living,” she says.

While she’s in Columbia, Alix is working on her own documentary film and also teaching an undergraduate class on crime to journalism and film students. “A lot of my students are working on local crime stories, some of them from history,” she says. The class has already taken a field trip to the Boone County Courthouse to visit when court was in session. “Part of my interest in taking the kids to court is you learn about your community — not just the case itself, but the jurors, whoever else is in the courtroom. It’s a cross-section of what your community is, and when I sit in the courtroom in Key West, Florida, what I learn is different from what you see here in Columbia.”

Alix’s interest in the courtroom as a reflection of the community is evident in her new book, “Courtroom,” made up of drawings and interviews from her years sitting in court. “If you want to understand the community you live in, simply sit in a courtroom and pay attention,” she says when describing the book.

Outside of teaching and working on her film, Alix has hiked to the Devil’s Icebox and has enjoyed the beauty of the Missouri Theater. Alix has discovered downtown restaurant favorites like Café Berlin, Sycamore, and Main Squeeze, and she particularly likes that Columbia is very walkable. “Columbia has been very welcoming and supportive,” she says. “There’s a presence from the university in a good way — there’s constantly people thinking, creating, and experiencing a sense of community.”

Alix is a reminder that, for many, Columbia represents a change of pace. “I’m a New Yorker, and I love New York, but I’m always happy to leave and come back,” she says. “Travel recharges me and gives me a different perspective. I like Columbia and the university, and I especially like the support and embrace of this non-traditional way I’ve tried to approach my course and my own work.”

The Traveling Nurse
Heather Hill didn’t know a lot about Columbia before coming here. “Beyond Shakespeare’s Pizza and the university, I wasn’t aware of the community at all,” Heather says.

As a traveling nurse, Heather is based in Springfield, Missouri, and through her agency, she’s currently contracted to work at University Hospital. Contracts are typically 13 weeks and can be anywhere in the country. Heather is working in Columbia for the third time — a testament to her feelings about both the city and the health care system. “I really like the small-town feel and the diversity the university brings to the community,” she says. “I like the people, too. Everyone here has been really nice.”

Working at a teaching hospital is a new experience for Heather, and she finds it to be a supportive environment. “The staff work hard to support the next generation of medical professionals,” she says. “I admire the commitment they make to that, and I admire the team that supports success for the next generation.”

Heather’s co-workers have also provided her with a sense of community. “I engaged my co-workers and know what’s going on in the community through them,” she says. They’ve introduced her to restaurant favorites like Las Margaritas and The Pasta Factory, among others.

While she hasn’t had a chance to attend a game yet, she’s a big football fan and follows Mizzou sports. “I bought a sweatshirt,” she says. “I find myself more engaged with how the college is doing with sports.”

Columbia also feels like home to Heather since she stays in the same Airbnb when she’s in town, and the home is an easy commute to the hospital. “I found a second home with my Airbnb family,” she says. “I think that’s contributed to me staying in the area. I’ve also reached out to the neighbors, and that makes me feel like I’m part of the neighborhood as well.”

Outside of work, Heather enjoys walking around Stephens Lake, Flat Branch Creek, and the trails. “What I love about Columbia is their commitment as a community to trails and safe places for people to walk and bike,” she says.