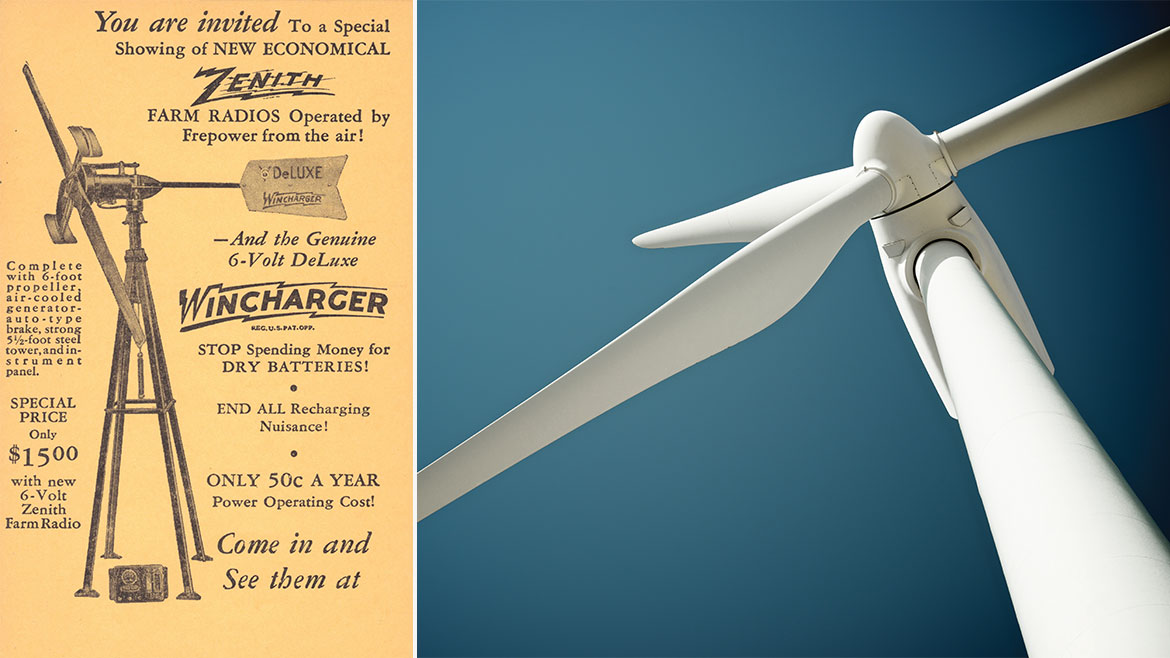 Transformations: From Carboholic to Ketogenic

Wind — one of the gifts of nature.

A provider of electric energy was first demonstrated in 1888 when Charles Brush installed a wind turbine electric generator to power the lights and appliances in his Cleveland home.

In the current stampede to reduce carbon emissions and combat global warming, power from the wind has been rediscovered.

Almost a century ago, The Wincharger Corporation, The Jacobs Wind Electric Company, Parris-Dunn Manufacturing Co., The Wind-Light-Power Co., Ruralite, and others began offering wind-powered electric systems to customers far removed from city-based sources. Vestiges of these installations remain, and you can spot one tower still on a farmstead near Goldsberry, Missouri. The Rural Electrification Act, signed in 1935 by President Roosevelt, largely obviated these wind-driven plants as electric cooperatives opened up across the country; one of the first was here in Boone County.

Now wind is back. At first, we were told the giant wind turbines were practical only across a sliver of elevated land in northwest Missouri, so up they went, spinning away. Woosh, woosh, woosh — blades tall enough to mandate nighttime obstruction lighting by the FAA and the usual flurry of unintended consequences and complaints, some of them from ecologically-minded folks you’d least expect to be bothered.

So now the fury has blown into northwest Boone County. Heavily wooded; sparsely populated; largely unnoticed in the rush to develop the county’s other sectors. The proposal by a Chicago-based firm to place the tall towers and their spinning trio of blades across this least-noticed area of the county has aroused the dander of dozens of residents. “Not so fast,” they say after their attorneys and other advisors began questioning the language in the proposed land lease agreements.

Harnessing the gifts of nature is an admirable cause now that the world has been aroused to do something about climate change. Neat propositions all. Water, solar, wind, the tides, geothermal, and so on. President Roosevelt was convinced during the 1930s that the massive tidal changes in the Bay of Fundy near his summer home would make the Passamaquoddy Project in eastern Maine a viable proposition. That was until a series of controversies cancelled the idea after construction had begun.

A law of physics. Electricity from each and every renewable source is produced as direct current as it was pioneered by Thomas A. Edison. But the flaw of direct current is that it can’t be transmitted over long distances.

Nikola Tesla had a different idea. Alternate the source of electricity in cycles (60 is the standard in this country, 50 across Europe) and then voltage may be raised and lowered — transformed — allowing electric power to be sent over long distances and shared with other producers via interconnected grids of synchronized power.

The electric wind turbines that may go up across northwest Boone County will dump massive quantities of direct current into a processing facility that in turn regulates and alternates it so that power from the wind can be inserted into the grid.  Whatever deleterious effects these giant turbines may have on the surrounding flora and fauna has yet to be determined, but that also applies for everywhere with wind turbines, for which there has been no conclusive proof of harm.

For some, skepticism remains, especially about the developing slugfest over the widely heralded conversion to electrically powered vehicles. How robust will the electric grid be every evening when tens of millions of owners plug their vehicles in to be recharged? There have been huge strides in storage battery technology. The current doyen is lithium, a substance not found in abundance on our shores, and that is a concern, though there is confidence that other sources will be discovered and that research will take care of the rest.

We always figure out a way to lick these challenges. Never say never. We hope to be around to see today’s seemingly impossible made possible.