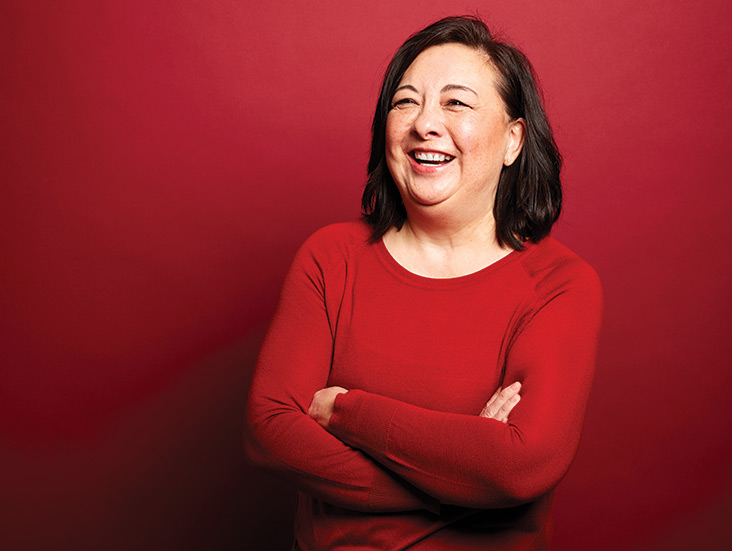 Audrey McFadden leaves sugar behind and beats her diabetes diagnosis.

When Audrey McFadden turns her cell phone around to show me her before and after photos, even she can’t believe the transformation.

For most of her adult life, she was overweight. In the before photo, Audrey’s frame is fuller, and she looks tired. In the after photo, she stands visibly trimmer, happier, and more confident.

What changed between these photos? A Type 2 diabetes diagnosis and a personal promise to beat the disease without succumbing to daily medication and shots. The glimpse of these photos pays homage to Audrey’s motivation to balance her blood sugar and turn her life around.

Once Upon a Carb
The majority of her life, Audrey was what she calls a carboholic. Carbs were her drug of choice, and sugar was her toxin.

Growing up, Audrey’s diet included lots of white, starchy rice. She loved devouring sweet and savory treats alike. She willingly traded well-balanced meals for containers of processed pastries, ice cream, and crackers. She could eat an entire box of Wheat Thins in one sitting without a second thought.

With her husband, Rod, frequently out of town while she was running around after their two boys, she was exhausted. Every day, to combat her fatigue, she couldn’t wait to get home from work to take a midday nap. But she never had reason to believe her health was failing.

A routine checkup in the summer of 2017 implied otherwise. Her hemoglobin A1C, a measure of long-term blood sugar control, was a pre-diabetic 6.5, but her doctor never followed up.

“At the time, I had no idea what those numbers meant,” Audrey says of her appointment. Her doctor wasn’t concerned, so there wasn’t much reason to worry. She ignored her ominous results. “I just kept doing what I was doing.”

Getting the Diagnosis
Audrey used to say that no matter what, she could never give up her cheese and bread. If she could, she would eat a baguette with some soft Brie cheese for every meal.

In June of 2018, Audrey was back for another routine check-up, this time with a different doctor who ran her lab tests once more. Her hemoglobin A1C had risen to a vexing 7.3, full-blown Type 2 diabetes. Her blood pressure, cholesterol, and triglycerides were also too high.

“I have to diagnose you as diabetic,” her doctor said. These seven words jolted fear across Audrey’s body. Insulin shots were her first thought. Finger pricks. Kidney disease. Heart disease. Loss of limbs. These thoughts followed, pounding more fear into her brain. The possible symptoms and plausible realities of living with diabetes taunted her.

“I was like, ‘Oh my gosh, I do not want to be put on medication,” Audrey says. “Like a Band-Aid, it doesn’t fix the problem.” Audrey instead pleaded with her doctor to give her a few months to show her she was serious about getting healthy.

“I was OK with being overweight, but I was not OK with being sick by something that I caused myself,” Audrey says. “It wasn’t like it was a disease I couldn’t avoid.”

Diabetes isn’t something to mess with. Audrey took to Google to research the fastest ways to get her levels down. Her research pointed to the ketogenic diet, a low-carb and high-fat diet, as one of the swiftest ways to ketosis. Following a keto diet meant cutting carbs and all her favorite comfort foods. “I was eating my words — I had to,” Audrey says.

Audrey was motivated to lower her A1C. Once acclimated to the diet, she mentally knew that this was how it was going to be and there was no turning back. On her phone, she installed Carb Manager, an app that tracks macronutrients and her daily protein, fat, and carbohydrate intakes. She cut carbs and all sugars cold turkey and instead opted for leafy greens, healthy fats, and nutritious proteins. She followed Facebook support groups for others eating keto with diabetes.

“My body had been so good to me,” Audrey says. “I have two beautiful boys. I’ve traveled the world. But I’ve abused it so much that it can’t keep up. I have to be there for my boys. I have to fix this.”