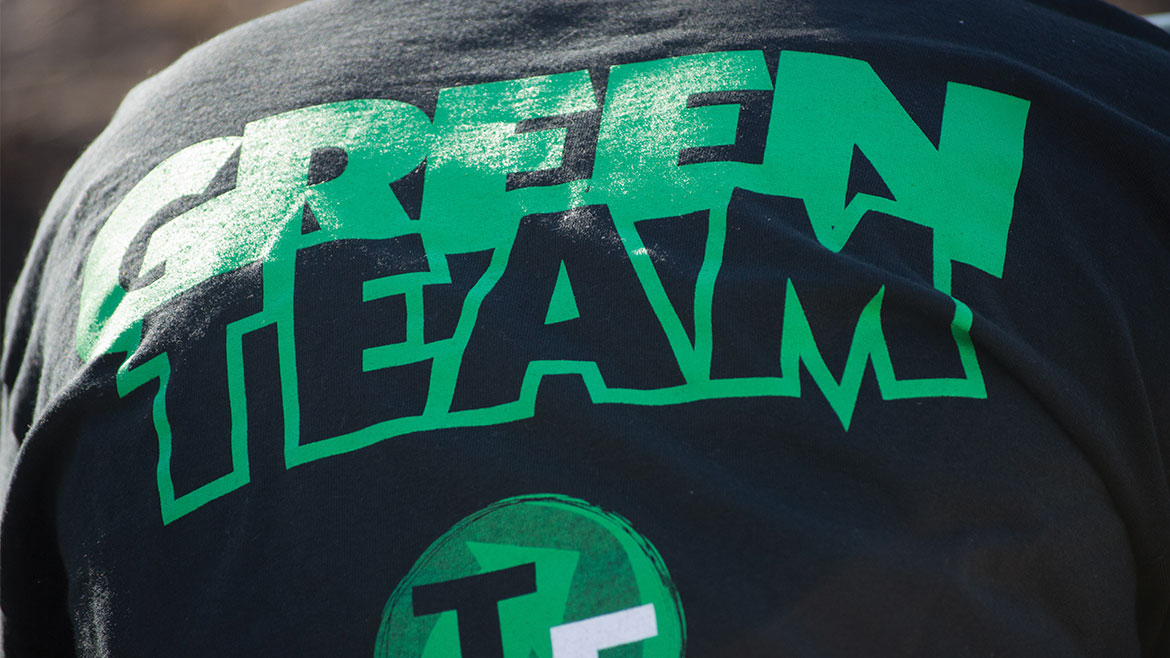 Each year, the True/False Film Fest can be counted on to draw tens of thousands of people to Columbia for a four-day celebration of documentary filmmaking.

That’s why, starting with the 2014 event, True/False committed to taking steps to cut down on its carbon footprint and work toward a zero-waste future. With this year’s fest set to run from February 28 through March 3, True/False sustainability coordinator Patricia Weisenfelder is already knee-deep in the work of continuing the efforts from years past while enhancing sustainability initiatives for this year.

Weisenfelder’s first fest as sustainability coordinator was in 2017. She says her predecessor started putting numbers to the impact the sustainability efforts were making the year before, but once Weisenfelder took over and standardized data collection methods, she was able to track year-over-year improvement.

At last year’s festival, for example, True/False reported nearly 2,600 pounds of food waste and 1,800 pounds of recyclables collected. The fest was able to divert nearly 88 percent of the waste from its four food-heavy events — The Jubilee, Reality Bites, Filmmaker Fete, and Closing Night Reception — from the landfill, nearing the “zero-waste” guidepost of 90 percent set forth by the Zero Waste International Alliance. True/False was able to reduce its overall event waste by 157 pounds from 2017 and its landfill contribution from events by 78 pounds.

“We’ve really lucked into a great crowd. People are very interested,” Weisenfelder says. “Some people compost at home and some people have never seen it before, so it’s kind of educating them on sorting as just one of the tasks that you have to do. But, ultimately, we’ve had really good reception and people are really excited to see that we’re making this effort and really appreciate it.” 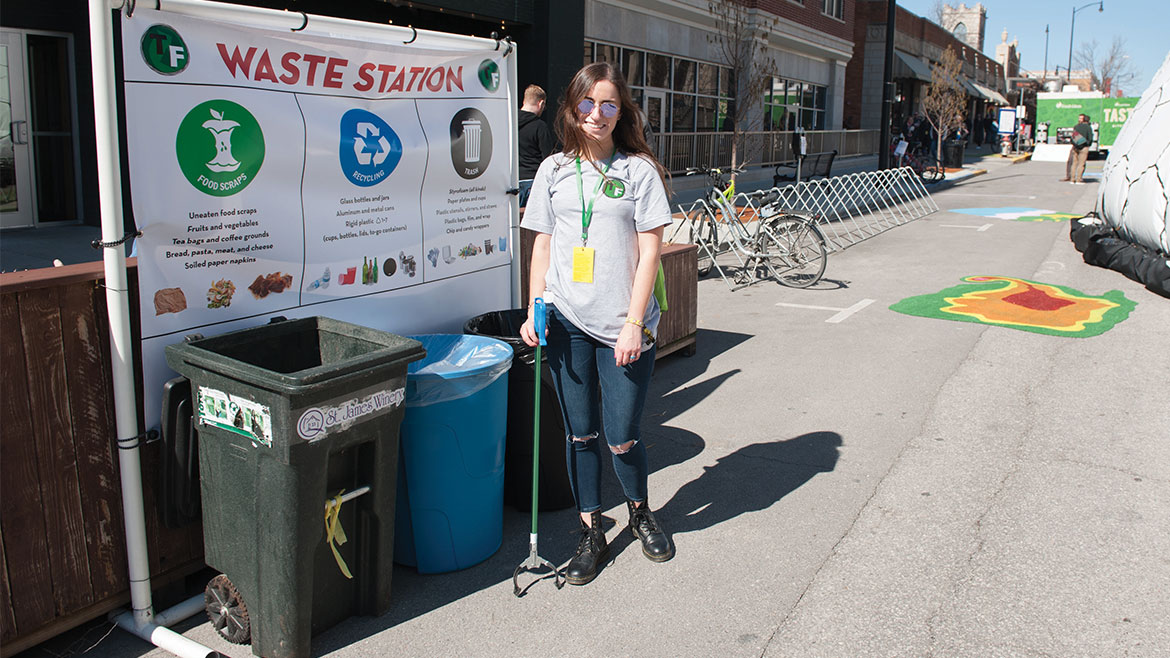 Weisenfelder heads the Green Team that has numbered between 20 and 35 volunteers during her tenure. Green Team members are tasked with roaming the venues to collect data and educate attendees about the fest’s sustainability efforts.

They encourage guests to recycle glass, aluminum, paper, and appropriate plastics and work with local restaurants to collect food waste, weigh it, and divert it to the Columbia Center for Urban Agriculture, where it’s composted.

“We recruit a lot from sustainability groups on the Mizzou campus or around town just so that people are excited to be on that team — we don’t want them to feel like they wanted to be in the theater somewhere and now they’re picking up trash,” Weisenfelder says. “We really do try to get those volunteers that want to be there. Our food waste and amount of recycling have definitely increased in the past three years, but, ultimately, we know that we want to reduce everything. So there have been some areas or events where we’ve reduced the overall weight of everything because we’re depending less on those materials, which is really good.”

True/False went straw-free last year and recruited some of its sponsoring restaurants to do the same. Camp True/False, the annual program for high school students, utilized real plates and silverware for its participants instead of relying on single-use items. It’s a push that will continue with this year’s event.

“A lot of the education team is served lunch and dinner every day,” Weisenfelder says. “Even cutting back for 100 students and two meals a day — that’s a lot of single-use items we were able to avoid altogether.”

And Weisenfelder has her eye on something else: the giant aluminum pans that hold mass quantities of food at catered events. They aren’t able to be recycled through the City of Columbia Solid Waste Utility, but Weisenfelder wants the Green Team members to collect as many as they can during the fest this year so they can find a local vendor who accepts them afterwards.

On the front end, True/False is also working with the restaurants it partners with to provide the same services with less waste involved.

“The fest relies heavily on donations, food sponsors, and that kind of thing,” Weisenfelder says. “What we’re able to do, and hoping to do a little bit more over time, is work with those restaurants to make their impact even lower. We deal with the waste once it gets to our events, but it’s also helping them to figure out ways to maybe serve it buffet style as opposed to pre-packaging lunches — that kind of stuff that reduces their waste before it even gets to the festival doors.” 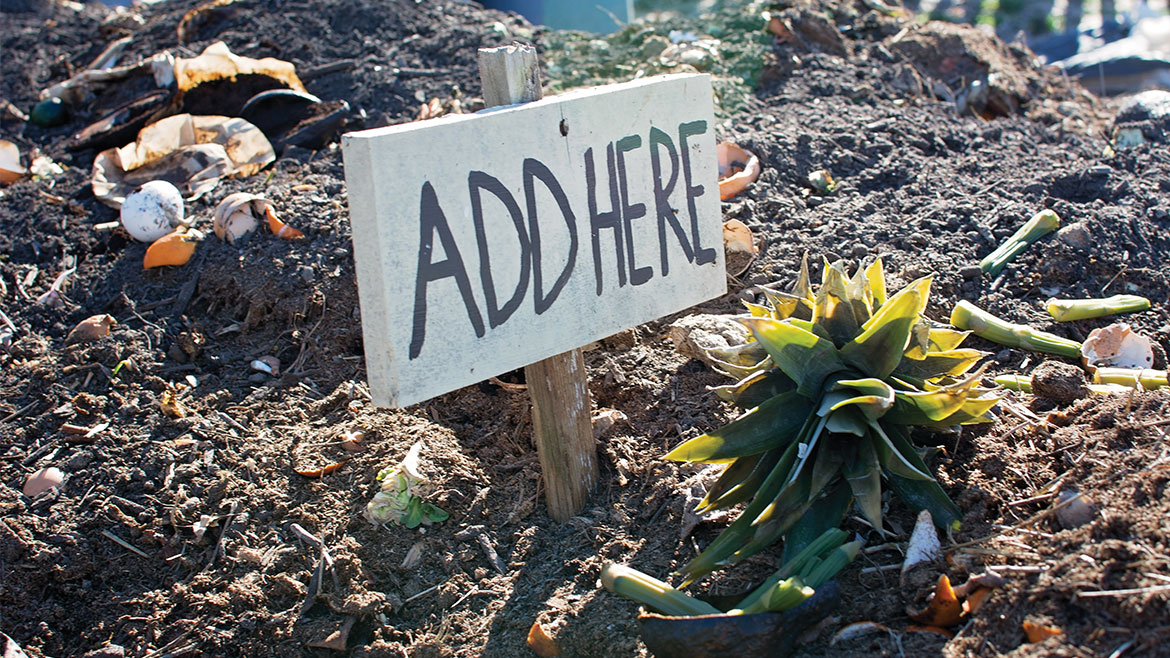 GOING BEYOND THE COMPOST PILE

Food waste and recycling are only part of the equation. True/False also encourages festivalgoers to rent bicycles from local shops if they need to get around town and partners with Go COMO to provide free public transportation and a dedicated venue route for city buses during the event.

“The sustainability team focuses a lot on solid waste right now, but we do acknowledge that there are other impacts that the fest has on the community,” Weisenfelder says. “We have a pretty big footprint from airplane traffic, so we’re kind of exploring our options there to look into other possible energy usage or transportation, other aspects of sustainability that we can really tie into that plan.”

Weisenfelder says she’s relatively new to the world of event sustainability. She has a graduate certificate in sustainability, but the experience she’s gaining coordinating the efforts of True/False keeps opening her eyes to new possibilities.

“There’s a lot that I can learn, still, from other events, seeing what other community events are doing,” Weisenfelder says. “But it also depends heavily on partners in town that I’m able to learn from and work with to make it possible. For me, it’s been a lot of learning as you go and making the most of every opportunity that we have.”

True/False Tips from an Introvert