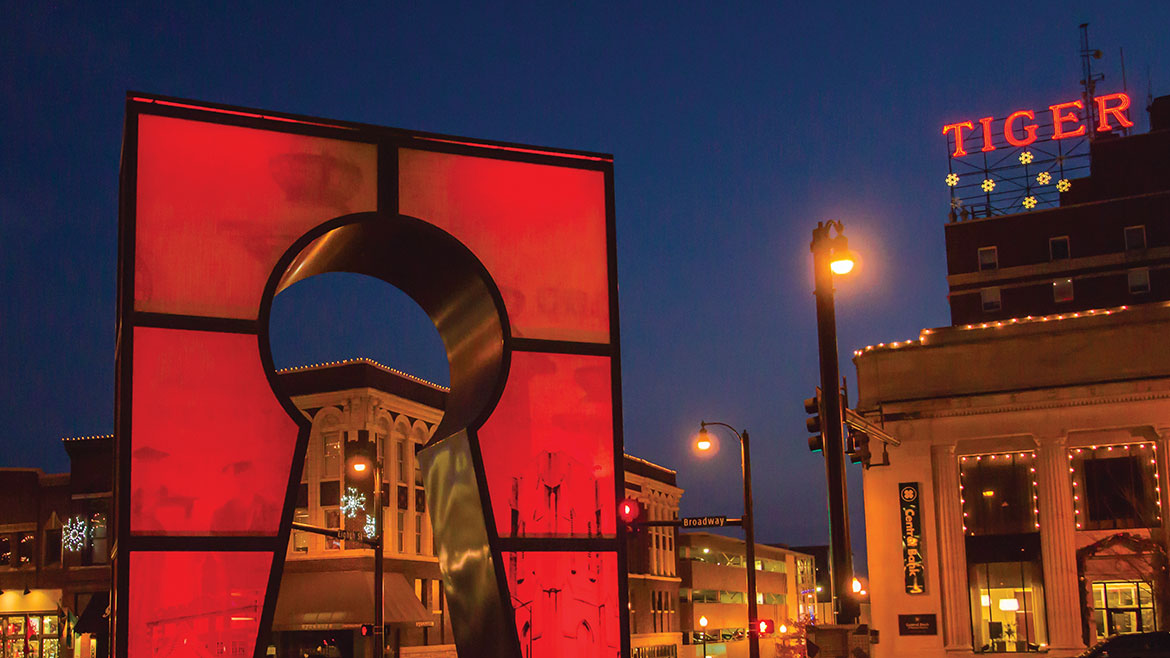 A brief 3-minute walk along the north end of the historic Avenue of the Columns downtown, also known as Eighth Street, is all that separates the government headquarters of the fourth-largest city and the seventh-largest county in the state.

Rather than bemoan the issues of aging infrastructure throughout the city and the county and the increasing demand for public services in the face of lagging sales tax revenue to repair and replace roads or to provide services, Atwill wears a smile and shrugs.

“These are good problems to have,” he says, going down the list of concerns that many other communities and counties are also facing against a backdrop of eroding tax base, lack of jobs, and families moving away. “These are the type of problems a lot of them would like to have,” he says.

The U.S. Census Bureau reported in May 2016 that Columbia had gained about 10,600 residents from 2010 to 2015 — a nearly nine percent increase to 119,108 overall — to leapfrog Independence as the fourth largest city in the state. Columbia only lags behind Kansas City, St. Louis, and Springfield in terms of population. The city government employs around 1,500 people and had a fiscal year 2018 budget of $454 million.

Boone County, meanwhile, has a population of around 175,000. The county government had roughly 520 full-time employees in 2017 and a budget of $71.3 million with about 71 percent of that funding coming from sales tax. The ebb or flow of sales tax revenue, combined with a state mandate to provide services like the county jail or the functions of other county offices as well as city services including law enforcement and road maintenance and repair, is a common challenge for city and county leaders.

County Auditor June Pitchford is charged by state statute to make sure the county’s budget is balanced and healthy. Pitchford, in office since 1991, consistently points out in her annual budget message the “inherently volatile” nature of sales tax. City Manager Mike Matthes is the city’s budget director and estimates that the city is losing out on as much as $10 million a year due to untaxed internet sales. The budget officials say they can’t overstate the importance of local sales taxes when it comes to the ability to provide necessary services to city and county residents.

“The marketplace is shifting from Main Street to cyberspace,” Pitchford says. “Our tax laws just haven’t kept pace with that.”

Total budgets within the City of Columbia

GETTING IN ON THE BUDGET ACT

While Matthes works with city department heads to prioritize their individual budgets, the county’s elected officials have “the responsibility and the duty” to prepare their budget requests and present them to Pitchford by September 1 each year. The county commission conducts budget work sessions with Pitchford and individual department heads and elected leaders to formulate a final budget.

“In our environment, each independent elected official has the ability to bring those needs forward that they believe are important,” Pitchford added.

Another notable difference between the two local forms of government is the mandate for the county to provide many services that the city is not charged with: keeping land records and issuing marriage licenses, running the county jail, and keeping assessment records, among other things.

“Many of the things we as a county are responsible budgeting for are not discretionary to us,” Pitchford says. “They’re not things we just dreamed up. They are state functions that are mandated to us.”

As a Class 1 or first-class county, Boone County governs and operates according to state statute. Laws not expressly stated in the statute as responsibilities of county government must be addressed via the state legislature. For instance, the three-member county commission that enacts county-level policies and regulations has unsuccessfully attempted for several years running to convince the legislature to broaden Boone County’s authority to adopt rental standards. Apart from regulations related to public health, such as weeds or trash and rubbish on a property, the county needs legislative approval to enact regulations on energy efficiency, broken windows, and other structural issues for properties that the neighboring city government does have the power to address.

Pitchford says the city charter allows the city council to adopt ordinances and even set certain fees, whereas fees for county services, such as recording deeds and other documents, are mostly set by state statute. Mandated services and the growing demand for those services, whether elections or property assessments, often outpace the amounts that the county can collect.

Matthes also points out that the city’s governing model resembles a corporation, where the city manager acts as the chief executive officer and the council acts as board of directors.

“They set policy and I implement those policies,” he says.

“This is incredibly freeing,” he says. “We can follow facts where they lead us without the filter of party dogma.”

Atwill, who is seeking a third four-year term this election, says there’s “rarely as much as a hint” of partisan politics beyond campaigning and election day because most of the matters the county commission acts on aren’t partisan at all: planning and zoning decisions, public health, delivering county services to residents, etc. Atwill also noted that many of the county’s special sales taxes — for children’s services, law enforcement, roads and bridges, and emergency management — were approved by voters and were non-partisan ballot issues.

“That’s what the money is for. That’s all it can be used for,” he says.

Matthes notes that the city and county work together on a daily basis in several areas, including health and human services, which is jointly funded by the city and county, and other departments. City and county planning staffs spend a lot of time together managing current needs and forecasting future growth, with an especially keen eye on unincorporated areas of the county that might be annexed into the Columbia city limits.

Boone County owns Boone Hospital Center, the county hospital that BJC HealthCare manages through a lease agreement. The hospital has an elected board of trustees, so the county commission has limited decision-making authority. The city’s operation includes Columbia Regional Airport and an electric utility.

“Operating a utility is a very significant endeavor,” Pitchford says, noting that a business enterprise activity must recover costs via user fees rather than from tax revenue. It’s not a governmental burden the county has. “The county is solely focused on government activities,” she says.