The airport has had its ups and downs since its move in 1968 from northern Columbia to more than 1,500 acres about 10 miles south of the city, off State Route H east of U.S. Highway 63. Owned and operated by the City of Columbia — and specifically run by Columbia’s Public Works Department — the airport is surrounded by property under the jurisdiction of either Boone County or the City of Ashland. Designed to serve these and other surrounding areas, Columbia Regional Airport (COU) has been attracting a growing number of passengers in recent years.

COU enplanements began an ongoing climb in 2009 following a significant dip in 2007 and 2008 that reflected changes in the airport’s carriers and service. With American Airlines offering two daily flights to and from both Chicago’s O’Hare International Airport and the Dallas/Fort Worth International Airport, planes have been flying about 85 percent full throughout this year, city officials say. The upward trend is visible in the number of COU enplanements. In 2007, the city recorded 9,090 passengers boarding COU flights; by 2013, some 43,178 passengers took off from Columbia’s airport. COU airport manager Don Elliott predicts the number of enplanements this year will exceed 50,000.

Elliott believes the airport is on the cusp of a growth spurt that would more than double the number of passengers boarding at COU within five years. That ambition would require either additional flights or larger aircraft at the airport — or more likely, Elliott says, a combination of the two. Plans to rebuild the airport’s infrastructure would pave the way for much of that growth while bringing the airport into compliance with federal safety standards, he says.

The proposed renovation would carry a multimillion-dollar price tag, with runway and taxiway improvements that are tentatively slated to begin next year expected to cost more than $27.8 million over the next several years. Most of the bill — 90 percent of it — would be footed by the Federal Aviation Administration, with the remainder financed by Columbia’s transportation sales tax, according to city officials. Having approved Columbia’s airport master plan and the improvements it envisions, the FAA, Sapp says, has signed off on the proposed projects and will consider financing 90 percent of their cost as its funding allows.

“What they [the FAA] have helped us do through the master plan, with the consultants, is they have basically given us a road map, that you need to do A, B, C, D and E,” Sapp says. “And that’s exactly what we’re doing to improve the infrastructure capacity at the airport.”

“It’s a community asset,” Cecil notes. “If we don’t do it, we become insignificant as an airport.” 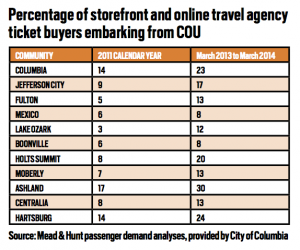 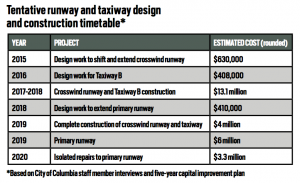 At the heart of the COU master plan’s proposed improvements is the renovation of the airport’s nearly 50-year-old runways. The reason is straightforward: “The runway does not have an indefinite life,” Elliott says. “It’s just like a road.”

But the proposed improvements entail more than pavement repair, as vital as that is to the overall plan. The crosswind runway — a 4,401-by-75-foot east-west runway used primarily by smaller aircraft — also is to be lengthened to 5,500 feet and widened to 100 feet. An existing visibility problem between the primary and crosswind runways caused by buildings on the property is slated to be corrected by moving the runway 1,850 feet to the east, Elliott says. Similar work would be done to Taxiway B to extend it to 5,500 feet and shift it to the east. And reconstructing the asphalt runway will strengthen as well as repair it because plans call for it to be rebuilt with greater weight-bearing concrete.

The primary runway, 6,501 feet long and 150 feet wide, already is made of concrete. Its pavement will be rehabilitated and the runway, which runs north to south, lengthened to 7,400 feet. Repairs of its taxiway were completed in 2013.

Although these proposals have been on the books for a while, and other preliminary projects have been completed, work on the runways themselves appears likely to begin next year. Airport administrators in late October received advance notice from the FAA of the agency’s intent to fund a handful of Columbia airport improvements in 2015. Although Elliott cautions that the notice is not a formal allocation of project funds, he expects the FAA to follow through with the financing. Projects the FAA has given notice it intends to fund include:

With each improvement comprising several steps and dependent upon FAA funding, the runway work alone is expected to take several years.

“We’re probably looking in five to six years to be able to get this work either in design or completed,” Sapp says.

Once the airfield infrastructure improvements are complete, Sapp says the city would need to make a decision about remodeling or repurposing the existing airport terminal. If the city were to decide on a new terminal, he says it likely would be built along State Route H on the north side of the airport property. The existing terminal probably would be used as a general aviation terminal, separating commercial and general aviation screening operations as the FAA would like to see, Sapp says.
Opening doors

Even as they work to renovate the airport into compliance with FAA requirements, city officials hope they are laying the groundwork for airport growth. The city will have an easier time marketing the airport to American Airlines or other carriers if it can demonstrate Columbia’s commitment to ensuring the airport’s infrastructure can handle larger aircraft, Sapp says. That’s of particular note, given that airport administrators believe the 50-passenger regional jets now flying out of COU will be replaced with more fuel-efficient 76-passenger aircraft.

“Within the next three to five years, most of the 50-passenger regional jets will no longer be in service,” Elliott says.

American Airlines spokeswoman Martha Thomas says she cannot comment for competitive reasons on the airline’s plans regarding service to specific airports or markets.

“American Airlines is very pleased with the performance of our service in Columbia, Missouri, and the support we’ve received from the community,” Thomas wrote in an email. “We constantly evaluate our network, including the specific aircraft we use on routes to cities such as Columbia, to ensure we are maximizing our fleet and profitability while matching customer demand.”

That said, COU administrators are eyeing opportunities for larger aircraft, new destinations and possibly additional carriers at the airport. They’re also considering opportunities for light cargo or other types of operations there. Elliott mentions the possibility of serving FedEx or United Parcel Service operations, and Sapp wonders whether there might be a role for the airport in the University of Missouri’s plans to help create a domestic supply of a powerhouse medical isotope. Meeting FAA standards and upgrading the airport’s infrastructure opens up a great many possibilities, ranging from new cargo business to additional commercial destinations, Sapp says.

“We’re not quite there yet,” Sapp notes. “But we’re getting there, and we have a plan to get there.”

The State of COU