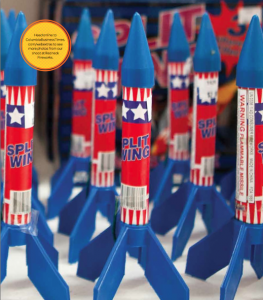 Virginia residents Leea<cq> and David Wroten browsed through Redneck Fireworks east of Columbia on their way home from a visit to Macon, Missouri, last spring and took in the shelves filled with products ranging from Morning Glory Sparklers to an assortment of cake fireworks. When their shopping concluded, the Wrotens emerged with a package of Screamin’ Eagles Rockets and a variety of other fireworks to take back with them to the East Coast.

“My grandson wanted me to bring him some,” David Wroten says. “We don’t have rockets like this in Virginia.”

Customers like the Wrotens are the off-season backbone of Redneck Fireworks, which opened last April in a year-round store near the Hatton exit along Interstate 70. But it’s the hope of bang-up in-season sales that prompted Fulton resident Matthew Shaon to launch his fireworks business in the former home of Fireworks Supermarket, which closed its Hatton exit store in the fall of 2013. Shaon, 34, and his family have been running the fireworks business in what he describes as an “exploratory” season. If it goes well, Shaon hopes to place the store back on a year-round footing with a couple of employees. The storefront sign, which still closely resembles Fireworks Supermarket’s former signboard, will signal the enterprise’s fate, Shaon says. “If it’s a go after August, we’ll probably completely change the signage.”

Other aspects of Redneck Fireworks have their roots in the store’s former ownership as well. Shaon’s mother-in-law, Sharon Harris, managed the store for 23 years when it was the Fireworks Supermarket and retired when it closed. Harris offered her son-in-law advice, business contacts and a bit of a push to open the new fireworks retail operation.

“I told him, ‘This is available; it’s on the interstate,’” Harris says.

Shaon, who already has a full-time career as a social worker for the children’s division of the Missouri Department of Social Services, says he has “always wanted to be an entrepreneur” and decided to pursue his aspiration when the former fireworks store remained vacant for several weeks. He rented the roughly 2,000-square-foot building, which houses an office and product warehouse along with the business showroom, and began meeting the requirements for obtaining a license required to sell consumer fireworks as labeled by the U.S. Department of Transportation.

Consumer fireworks businesses may operate under a number of different state permits, all issued through Missouri’s Division of Fire Safety. Among them are permits for manufacturers and distributors, each of which cost $775 a year per location; a permit for wholesalers, with a fee of $275 a year per location; a permit for seasonal retailers, which costs $50 per year for each location; and what is called a “jobber” permit, which for a $525 annual fee per location allows the retailer to sell consumer fireworks for use outside the state of Missouri year-round as well as to residents during the fireworks season. Because Shaon is over 18 and operating out of a permanent structure, he meets basic state jobber permit requirements. After obtaining state and federal tax identification numbers as well as a retail sales tax license and proof from the Missouri Department of Revenue that he does not owe back taxes, Shaon applied for and received his state jobber’s permit.

From there, Shaon focused on meeting fire safety codes. For example, he says he must keep particular types of fire extinguishers no more than 35 feet away from any point in the store. The devices themselves must pass a fire extinguisher company’s inspection each year.

A Fourth of July business

With state permit in hand, Shaon set about stocking his store and serving customers. Redneck Fireworks obtains virtually all of its products — comprising about 400 different items, Shaon estimates — from the Springfield, Missouri-based wholesale operation of its predecessor, formerly called Mid-American Fireworks but now known as Fireworks Over America. Fireworks Over America runs both wholesale and retail operations out of Odessa, Missouri.

Most of Fireworks Over America’s products are imported from China, says Mike Beck, general manager for the company. Beck, a Columbia resident with 36 years in the fireworks business, says the variety of consumer fireworks has exploded over the years. The number of different products available just in the Fireworks Over America line has risen from about 100 when he was new to the business to about 500 different items now, Beck says. Some of that growth is due to changes in federal regulations, and some reflects a natural expansion. Some is attributable as well to rising consumer demand for fireworks, particularly new varieties. “This industry is dominated by the new,” Beck says.

Travelers also dominate the business, at least during the off-season. Missouri law allows fireworks sales to the general public only between June 20 and July 10 and between Dec. 20 and Jan. 2. Apart from those dates, fireworks buyers must sign a waiver stating that their purchases are for use outside of Missouri. In October 2012 the City of Columbia, which has long prohibited the sale or discharge of fireworks within the community, also banned the possession of fireworks other than sparklers within city limits. Given such regulations, off-season sales depend upon truckers and other travelers, Shaon says, and make interstate highway sites desirable for fireworks businesses.

That, in turn, encourages a wide customer base. Harris remembers selling fireworks from what was then Fireworks Supermarket to customers from as far away as Australia who sent their friends back to the store years later. And off-season sales often are higher than typical sales made during fireworks season, averaging about $100 compared to an average in-season sale of $40 or $50, Shaon estimates.

Still, the fireworks business centers on the first week of July. Shaon aims to sell between $100,000 and $140,000 between Memorial Day and August, while making just about enough to pay the monthly bills the rest of the year. Seasonal customers typically come from Columbia, Fulton and Kingdom City as well from nearby mobile home communities, he says.

“If you have a good enough Fourth, it pretty much covers the rest of the year,” Shaon says. “The rest is just the cherry on the top.”

Beck agrees. Some 60 to 70 percent of fireworks sales occur between July 2 and July 4, he says. “Open year-round or not, this is still a Fourth of July business in Missouri,” he says.