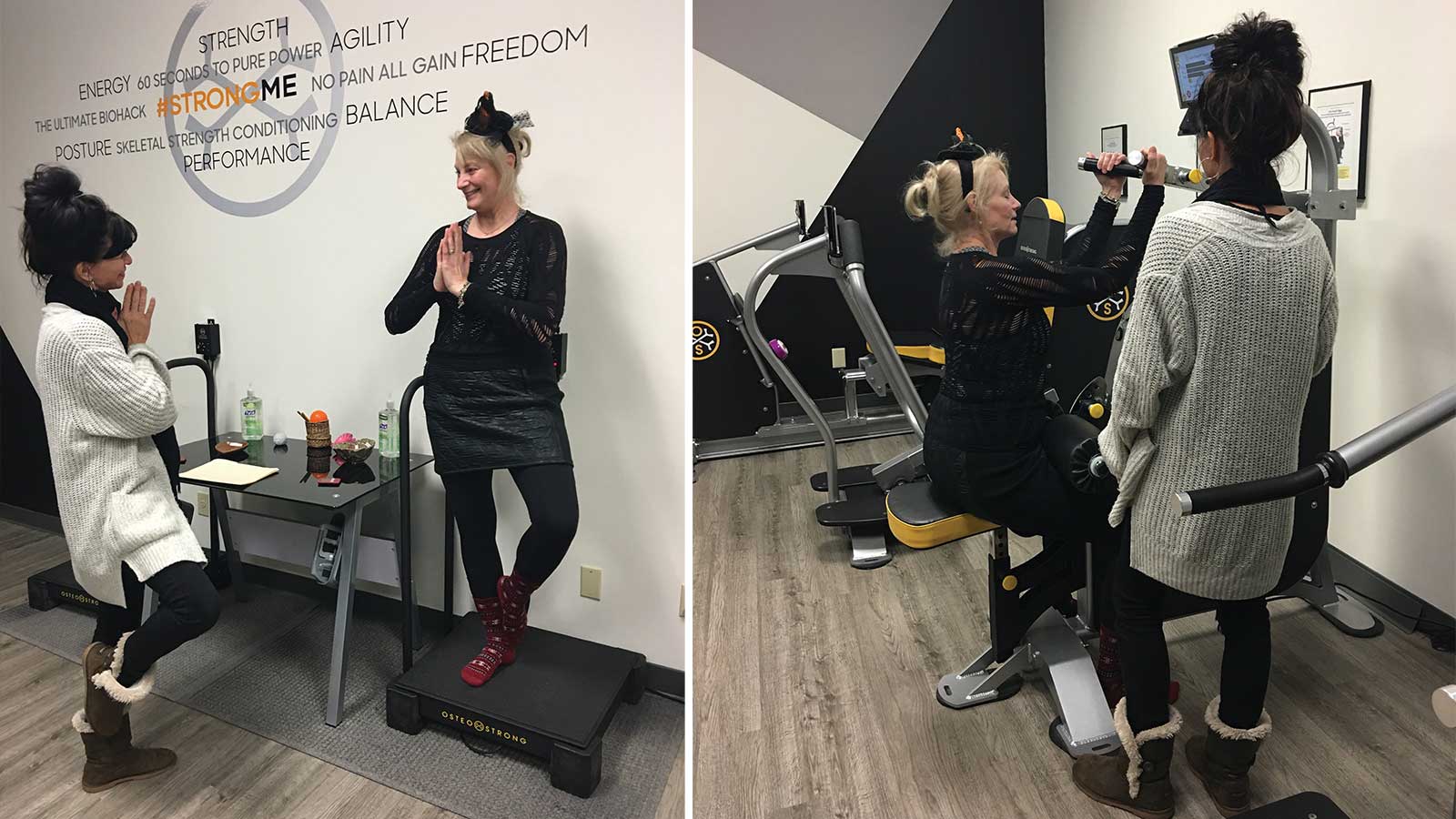 Thanks to Dayna Glanz, building bone density has never been so easy.

Dayna Glanz was diagnosed with osteoporosis in 2017. After doing some research online, she made the decision to seek an alternative to the pharmaceutical route. Her search led her to OsteoStrong, an organization based near St. Louis that focuses on building bone density.

For the next several months, Dayna spent one day a week taking the two-hour commute to OsteoStrong for a 10-minute session. From April to the next December, she started noticing real improvements like increased mobility and energy.

After several months of treatment, Dayna decided to come out of retirement and open her own clinic in Columbia. “I got very passionate about it and I wanted to give other people the opportunity,” Dayna says. The clinic opened on March 11, 2019.

Currently, Columbia’s OsteoStrong has a membership of over 100 and easily sees 25-30 people daily. There are four machines that people rotate through during an appointment. Each machine is designed to put pressure on certain bones in the body. One such machine resembles that of a leg press; however, this machine is isometric, computerized, and robotic, so when a client pushes on the plate, there are no moving parts.

Each part of the body being focused on requires a different amount of pressure. For example, the long bone needs a compression of 4.2 multiples of your body weight, or MOB. This is the pressure required to begin osteogenic loading. When you bend the bone ever so slightly, it triggers a process called mechanotransduction. This causes a biochemical message to be sent to the osteoblasts, which are the bone cells responsible for bone formation.

The machines were invented by a man named John Jaquish. He was in college and his mother was having difficulty doing normal activities. He changed his major and became a biomedical engineer. John found that after 18 months using the machines, his mother, who was 68 years old, had the bone density of a 30-year-old.

The statistics for those with osteoporosis show that the most common age bracket is generally over 60 years old.

Fifty percent of men over the age of 70 suffer from osteoporosis. When they fracture something, they have much more serious fractures and their mortality rate is higher. Fifty percent of women over the age of 50 have osteoporosis. One third of people who fracture, in both men and women with osteoporosis, will die because they have a much higher mortality rate. With a fracture, they don’t mend as quickly, so it is not necessarily the fracture that will kill them; it’s a blood clot due to being immobile.

“We’re trying to make a difference by hopefully changing those statistics,” notes Dayna.

OsteoStrong is for people of all ages. Whether you’re an athlete looking to enhance your athletic performance, or a grandparent that wants to be able to boogie again, Columbia’s OsteoStrong has something to offer everyone.