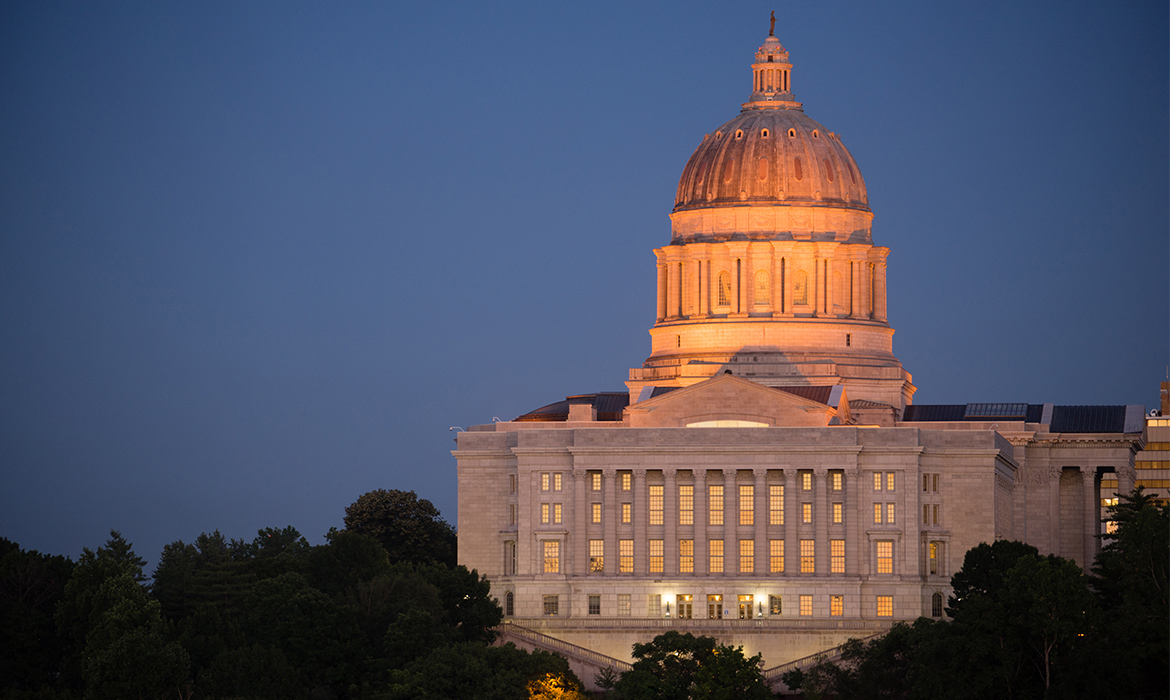 If you’re like a lot of readers, your eyes — and ears — now hurt from the endless stream of tribal political rhetoric that defined the 2018 campaign season. This month’s column puts that aside in favor of a truly capitol conversation.

Anyone who has driven past the Missouri State Capitol building since the spring knows something big is going on. First, the circle drive around the building was closed to traffic. Then, fencing went up and the south lawn was covered in gravel as a staging area for heavy equipment.

That was followed by scaffolding, which eventually got covered by weatherproof sheeting. Most recently, the scaffolding has crawled its way toward the top of the dome, some 238 feet above the ground.

It’s the kind of renovation the building has not seen since its completion in 1917, and it could take two and a half years to finish. State lawmakers say it’s essential to sustaining a building worked in by hundreds and visited by nearly half a million people every year. In 2014, they approved spending $40 million for some long-overdue restoration. However, the first bonds to fund the project did not get sold until the summer of the following year.

Most Missouri school children know the big, domed building between High Street and the Missouri River is the third capitol building to stand in Jefferson City. It replaced two versions demolished after fires had damaged them beyond repair.

Missouri voters overwhelmingly approved the construction of the current capitol. Revenue collections for the project eventually topped $4.2 million, allowing for some topdrawer decoration and furnishings.

At 437 feet long and 300 feet wide at the center, the five-story building is symmetrical, patterned after the U.S. Capitol in Washington, D.C. The exterior is Carthage marble, a dense limestone quarried in southwest Missouri.

Decades of water freezing and thawing have eroded and weakened the facade. In the 1990s, a chunk of masonry fell from the roof line to the porch outside the governor’s office, exploding on impact with such force that people within the office thought they might be under attack, triggering action by then governor Mel Carnahan’s security team.

More than a decade later, Governor Jay Nixon took the lead on making the necessary repairs. Phase one was to deal with water leaks. Nixon gave key lawmakers a guided tour to highlight the deterioration, which include formations of lime from the continuous dripping.

“Needless to say, the stalactites we just saw in the basement were not decorative,” Nixon said at the time. “Each day the water continues to seep through the damaged stonework is another day that the structural integrity of this iconic building weakens.”

The exterior work constitutes phase two, which, at nearly $29 million, spends most of the money. Damaged stone is getting replaced with marble from the Ozark Plateau, which officials say will be indistinguishable from the original.

Workers have removed decorative lighting for refurbishing. Likewise, the statuary, a prominent feature on the capitol grounds, will be reconditioned. The bronze likeness of Thomas Jefferson, standing more than 13 feet above its stone pedestal, is among several statues targeted for cleaning. In what technically is a separate project, the renovation includes the bronze relief that depicts the signing of the Louisiana Purchase and the nearby Fountain of the Centaurs statues, all of which form the plaza between the capitol building and the Missouri River to the north. The plaza should re-open to visitors by the end of the year.

The most dramatic restoration target, however, is Ceres, the Roman goddess of agriculture (or vegetation or any of a number of other  things, depending on who you talk to), whose likeness rises above the very top of the dome.

“She’s been up there for a long time,” Dana Rademan Miller, member of the Missouri State Capitol Commission, said during the summer. “She’s two tons and she’s 10 feet tall. And so that’s going to be a very interesting process, and we’re excited to see it happen.”

At this writing, the goddess awaits removal from her perch on the dome, which planners originally had anticipated for September.

Rademan Miller says workers have decided against using a giant construction helicopter to remove the statue as a single unit. The plan now is to reach Ceres by crane. The statue went up in three pieces a few years after the building opened. Engineers still must decide whether it should be disassembled before being lowered.

In any case, the capitol work is a long way from done. At this writing, the stone work is about 35 percent finished. The scaffolding currently surrounds only the eastern end of the building and work on the other end is still to come. The target for completion is late 2020, but prior to the next gubernatorial inauguration on the capitol grounds. A photo gallery and live webcam of the work are available online.