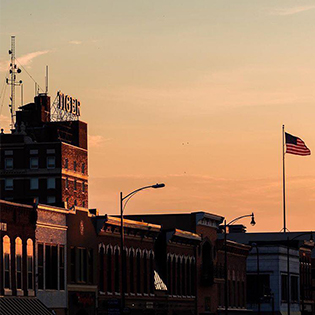 Chuck Bowman, president of Monarch Title Company Inc., will serve as the president of Missouri Land Title Association for a one-year term during fiscal year 2019. The Missouri Land Title Association was founded in 1907 as a professional association of abstractors throughout Missouri with over 175 active member title companies and numerous affiliate members. The association works closely with legislators in Missouri to support legislation that upholds the highest standards of the title industry and public interest.

Matt Garrett has been named general manager of KOMU 8 and Mid-Missouri’s CW. He has served in the role on an interim basis since November 2017. Garrett’s varied experiences at KOMU 8 give him a solid understanding of the position and station, and his involvement in the local community has prepared him to take thelead at KOMU 8, the station said in an announcement.

The Association of Missouri Electric Cooperatives board of directors selected Caleb Jones to become its new CEO upon the retirement of Barry Hart. In his role, Jones will be focused on keeping electricity affordable and reliable for co-op members and improving quality of life in rural Missouri. He is a former state representative originally from California, Missouri, and he also previously worked on Capitol Hill for Representative Kenny Hulshof focusing on agricultural and environmental issues.

Coil Construction has added Nicklas Timberlake to their team. Timberlake is a certified professional engineer and joins the team as a project manager. He will work directly with clients and manage budgets and schedules throughout all phases of each construction project. Timberlake has extensive experience in working with site design, stormwater management, and public utilities.

Kat Cunningham, CEO of Moresource Inc., was awarded the 2018 Outstanding Women-owned Business Award at the first Minority and Women Business Expo and Showcase. Cunningham, who started Moresource in 1994, has grown the business to operate in 25 states. Her continued involvement throughout Columbia has made her a wellknown leader for women and minority entrepreneurs.

MidwayUSA has promoted Jarrod Schwartz to the position of advertising manager. In this new position, Schwartz will be responsible for the advertising function of the organization, working to promote products and campaigns through various advertising media. Schwartz has been with MidwayUSA for more than eight years and has worked as an internet advertising specialist, content specialist, and most recently as the content manager in the product development department.

Central Bank of Boone County announced the promotion of Katie Griffith to Classic director. In her role, Griffith will assist with the personal financial needs for customers age 50 and over. She will also join local businesses to provide additional benefits for the bank’s Classic members and will be organizing unique travel opportunities. Griffith has more than seven years of experience in financial services and began her career with Central Bank of Boone County in 2011.

The Missouri Contemporary Ballet named Caitlin Sloan associate executive director. This new position was created especially for Sloan; Artistic and Executive Director Karen Grundy credits Sloan as being the most qualified person for this role. Sloan received her bachelor’s in dance from Grand Valley State University in 2009 and graduate certificate in nonprofit management from the University of Missouri in 2017.