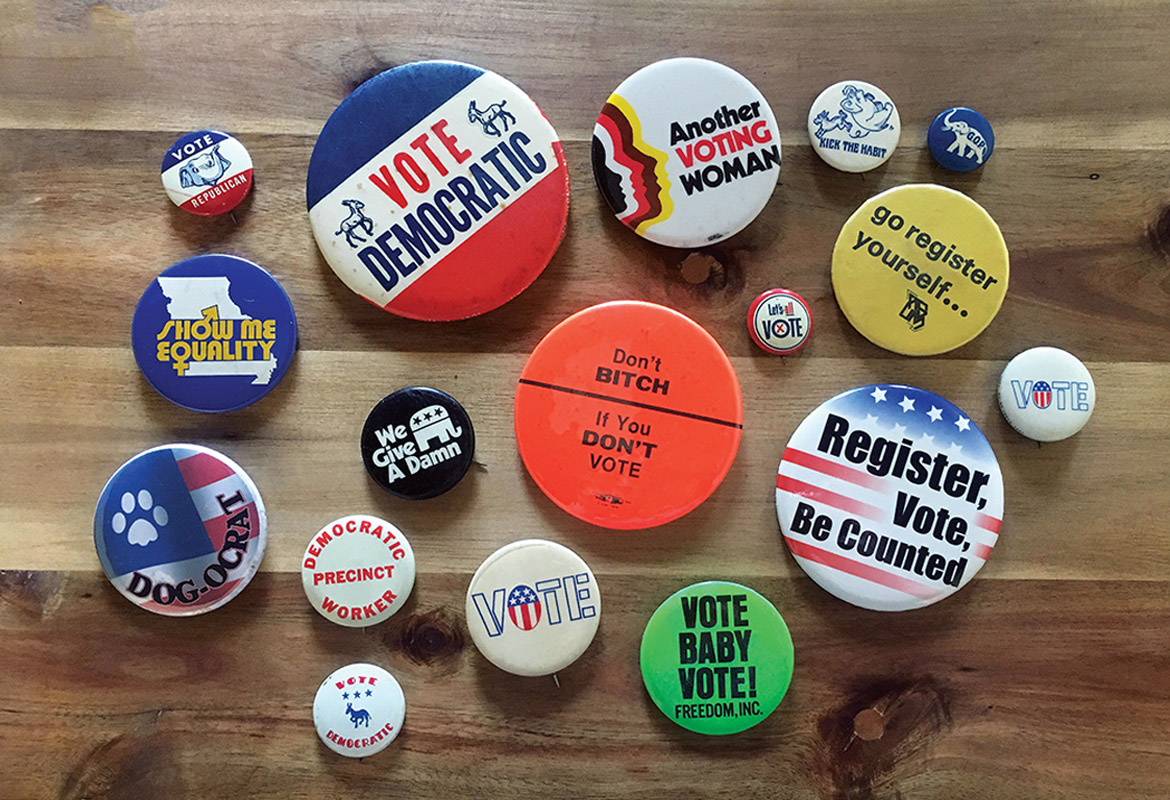 On Tuesday, August 7, Columbia voters will have the opportunity to go to the polls and exercise the important right to vote. This year, more than 60 candidates from five different political parties have filed to serve in positions ranging from senator to county auditor. Voters will also decide the fate of two important issues. That may sound like a long ballot, but in primary elections, not every voter will see every candidate’s name.
In primary elections, voters are asked to choose a ballot that represents one of the five political parties registered in the state of Missouri: Republican, Democratic, Libertarian, Green, and Constitutional. This allows party members to choose the candidates who will ultimately represent them in the general election slated for November. Because we do not register by party affiliation in this state, you’re free to choose the ballot of any party, and you can choose a different party in the next election. But, in the August election, you must choose one. Alternatively, you may choose a nonpartisan form of the ballot and will be allowed to vote on all issues, but no candidates for office.
So, let’s sort this out.

At the top of the ballot, you will find the race for senator. On the Republican side, 11 candidates have thrown their hats in the ring, the most well-known being Josh Hawley, Missouri’s current attorney general. On the Democratic side, incumbent Senator Claire McCaskill is being challenged by six other candidates for the right to move forward to the general election in November. Japheth Campbell is running for senator under the Libertarian label, and two candidates, Jo Crain and Jerome Bauer, have joined the race as Green Party candidates.
In the race for representative from the Fourth District of Missouri, three parties have fielded candidates. On the Republican side, incumbent Vicky Hartzler will face off against John Webb. On the Democratic side, two Columbia residents, Renee Hoagenson and Hallie Thompson, are seeking the nomination. The Libertarians give voters the choice between Steven Koonse and Mark Bliss.
On the state level, only the office of state auditor will appear on the primary ballots, but five political parties have fielded candidates. Four candidates have filed in the Republican primary; one candidate, incumbent Nicole Galloway of Columbia, has filed for re-election on the Democratic side; and Sean O’Toole and Don Fitz have filed under the Libertarian and Green Party banners respectively. This race also features Jacob Luetkemeyer, of California, Mo., running under the Constitution Party banner.
The office of lieutenant governor, which had been vacant, was filled by the appointment of Mike Kehoe to that post. Although that appointment may be challenged in court, the position of lieutenant governor will not appear on any ballots during the August primary.

Six different circuit judge positions will appear on the ballot and ten different candidates are seeking those seats. Here’s the breakdown on this confusing set of candidates. In the race for Division 1 circuit judge, one Republican, newly appointed Brouck Jacobs, and one Democrat, Finley Gibbs, have filed. Neither have primary opposition, so the two will face each other in the November election. In Division 3, only one candidate, incumbent Republican Kevin Crane, has filed and is therefore guaranteed re-election in the general election.
In the races for Division 5 and Division 10 associate circuit judge, incumbent democrats Kimberly Shaw and Leslie Ann Schneider have filed for re-election and have drawn no challengers from any party. Both will retain their respective seats on the bench.
The two remaining judgeships up for election feature challenges at the primary level. In the Division 9 associate circuit judge race, two Democrats have filed to fill the seat — and neither are incumbents. Tracy Gonzalez will face Stephen P. Wilson in the Democratic primary. Because no Republican has filed, the winner of the primary contest will become the next judge in November with no further opposition.
Finally, the office of Division 11 associate circuit judge will appear on some ballots in August. Republicans will see the name of Josh Devine. Democrats will have to decide between Kevin P. O’Brien and Stephanie Morrell to represent them in the November election.

Seven different county offices will be decided by voters in August and November. In four of the races, only the incumbent has filed for re-election with no opposition from within or outside of their own party. The four who are guaranteed re-election are Circuit Clerk Christy Blakemore, Prosecuting Attorney Dan Knight, County Auditor June Pitchford, and County Collector Brian McCollum.
In the race for county clerk, incumbent Republican Taylor W. Burks has filed to retain the seat he was appointed to fill one year ago. One Democrat, Brianna Lennon, has filed for the same seat. They will both appear on the ballots of their respective parties in August and will then face off in November. In the race for county recorder of deeds, incumbent Democrat Nora Dietzel is seeking re-election. Lisa Ballenger has filed as a Republican. Again, they will both appear on the primary ballot and will then go head-to-head to determine the winner in the general election.
The race for presiding county commissioner is a bit more complicated. Incumbent Democrat Dan Atwill has filed for re-election to this post. He is being challenged in the primary by fellow Democrat David Seamon. Voters who choose a Democratic ballot will choose between the two to move on to the November election. Matthew Cavanaugh has also filed for this seat as a Republican. With no opposition in the Republican party primary, he will ultimately face the winner of the Atwill and Seamon primary election. In some precincts, voters who choose partisan ballots will see candidates for various committeeman and committeewoman positions for their respective political parties.

Whether a voter in Columbia chooses a partisan primary ballot or a non-partisan style ballot, two questions will be presented in the August election.
The first item is entitled Proposition A and is colloquially known as the Right-to-Work bill. This law was originally passed by the Missouri General Assembly in 2017 (Senate Bill 19), but, as the result of a referendum petition, the people of Missouri will get to vote to uphold or defeat the legislation. As written, the bill “prohibits as a condition of employment the forced membership in a labor organization (union) or forced payments of dues in full or pro-rata (fair-share).” This item was originally scheduled to appear on the November general election ballot but was changed to the August primary at the end of this year’s state legislative session.
Columbia voters will also have the opportunity to vote on an issue entitled Proposition 1. The question is whether or not the City of Columbia should be allowed to issue $42,845,000 in revenue bonds to pay for improvements to and expansion of the city’s water system. The bonds would be paid off with revenues from the operation of the water utility. Columbia water customers could expect to see an 11% increase in rates over the course of the next few years to generate the additional revenue.
If you are not already registered to vote, you have until July 11 to qualify for the August 7 election. Absentee ballots may also be cast by qualified voters by contacting the Boone County Clerk’s office prior to the election. CBT