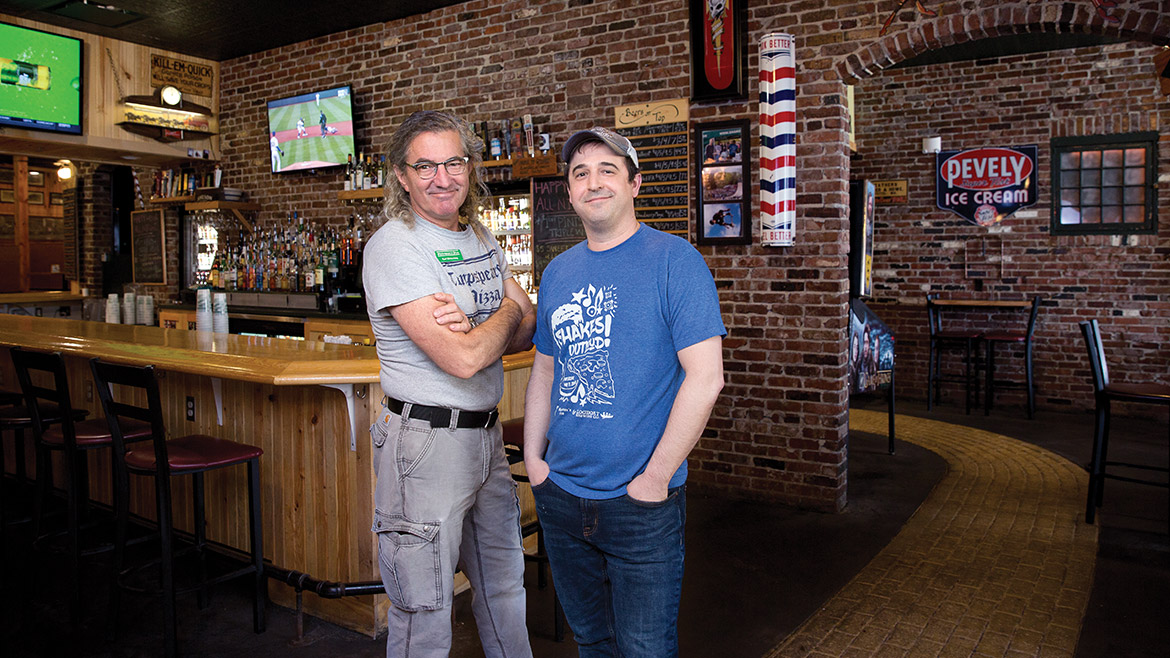 When Shakespeare’s Downtown General Manager Toby Epstein learned the building on Ninth and Elm would be demolished, he carried a tape measure around the restaurant for two months. He measured everything: tables, the height of ceilings, the width of countertops.

The fate of the Shakespeare’s downtown location was up in the air, but Epstein knew that if the restaurant was going to be rebuilt, parts of it had to be as similar as possible. It had been Shakespeare’s home since 1973.

“In the end, we wanted to make sure that when you walked in the door, you went, ‘Wow, did they even change anything?’” Epstein says.

Perhaps one of the most endearing things about Columbia’s most famous pizza shop is that it never seems to change, even when it does. 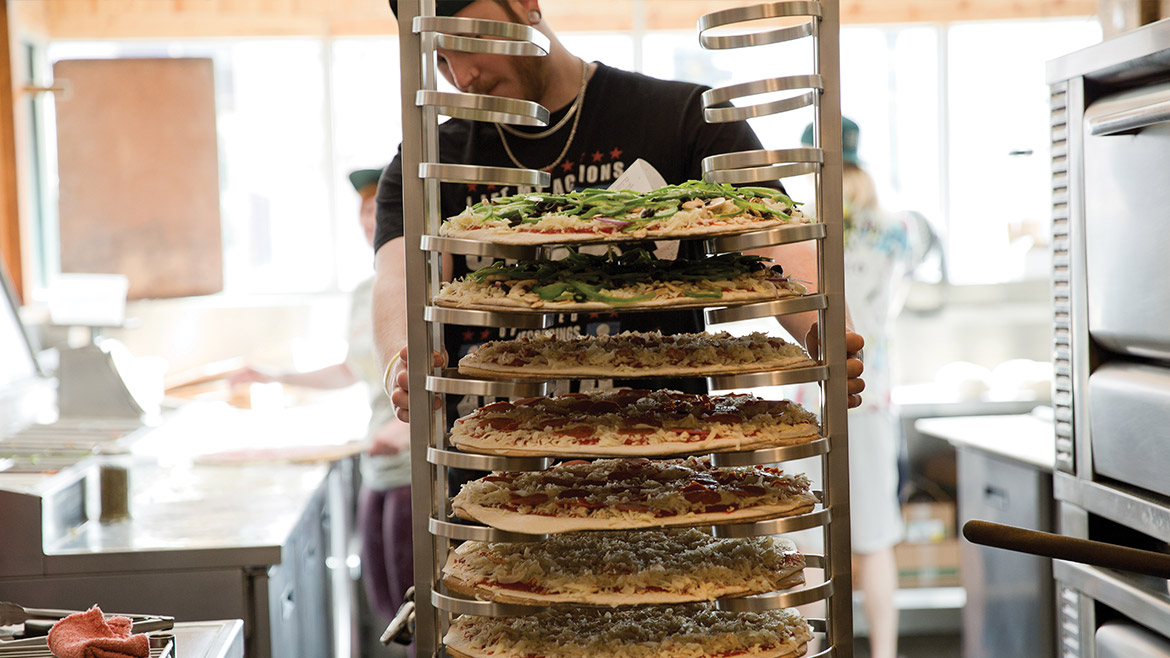 Consistency has been the key to Shakespeare’s success throughout its 45-year history. Its strong brand survived the demolition and rebuilding of the flagship downtown location, and in addition to the two other Columbia locations, the Shakespeare’s line of frozen pizzas is expanding to grocery stores around the state.
Columbia natives Jay and Nancy Lewis bought Shakespeare’s in 1976. It started out as a takeout pizza shop occupying just one room of a four-store building downtown.
But the demand for Shakespeare’s kept outpacing their size. Whenever a spot in the building opened up, Shakespeare’s knocked down the brick wall divider and moved in, adding more dining tables and then a bar. Eventually, Shakespeare’s took over the entire building, its original space on Ninth and Elm.

The hodgepodge collection of real estate became the eclectic environment Shakespeare’s customers loved. Eventually, the Lewis family even turned the laundromat next door into a second kitchen and built a roof over the alley to create a seating space.

Shakespeare’s business strategy grew as haphazardly as its physical space, says General Manager Kurt Mirtsching. For 20 years, the company didn’t have a long-term growth strategy. Instead, Mirtsching says, employees just “showed up in the morning drinking coffee and did what needed to happen.”

Now, Mirtsching says the business is trying to figure out what they did right those first 20 years and pass it down to the next generation of Shakespeare’s employees through training materials.

“We were balancing the party and the business and doing a good job of that inadvertently without a lot of forethought,” Mirtsching says. “Then, over years 15 or 20, Shakespeare’s happened. And then we spent the next 20 years trying to figure out, now what exactly did we do there? Because this is working. Let’s not mess this up.” 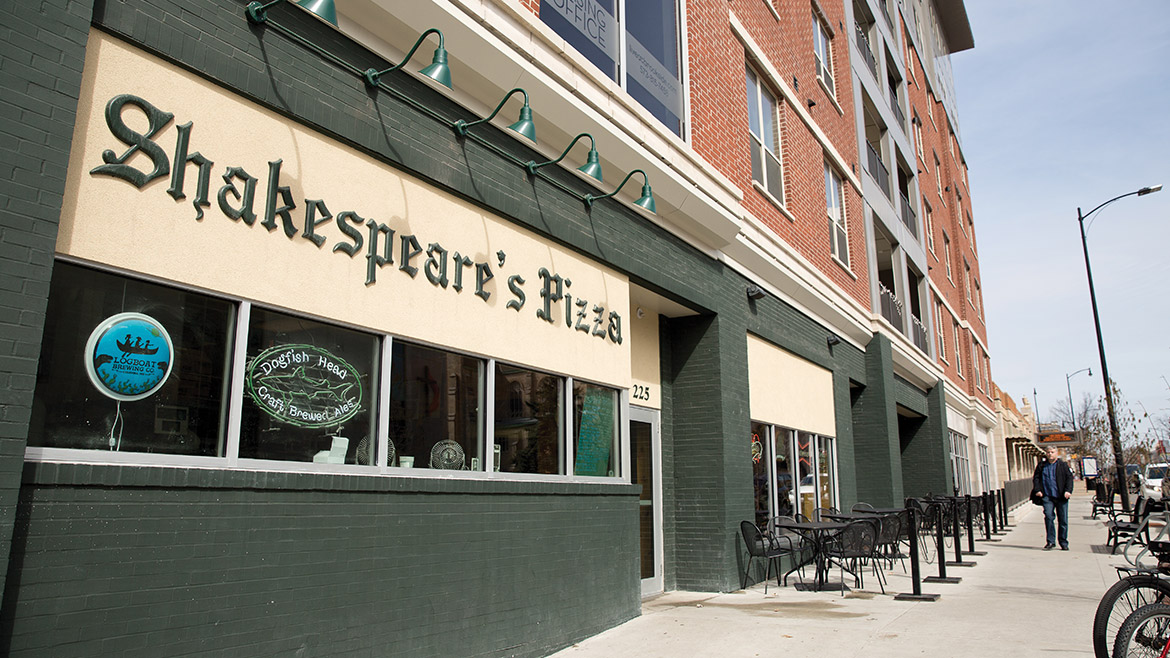 During downtown’s student housing boom, Shakespeare’s employees often joked that the building would get replaced by luxury apartments. They never thought it would really happen, Epstein says.

But in 2015, the managers found out the Rader family, who owned the building, had new plans for the property. The building was built in 1927, and while it certainly had charm, Epstein says it also had the inconveniences of an older building. There was little heat insulation, the concrete floors were sloped in odd places. The building had to be grandfathered in to several city building codes.

“There were lots of things about the building itself that were old, kind of run-down,” Epstein says. “I wouldn’t say they were unsafe, but they were run-down. So getting a new space was great.”

Epstein says he’ll always be sad to have lost the old building, but the remodel gave Shakespeare’s the chance to build a space that would fit it perfectly and correct every inefficiency. The old building had two kitchens, which was one of the biggest inconveniences employees dealt with: To restock supplies, employees had to travel across the building and go up or down stairs carrying heavy bags of flour, pepperoni, and cheese.

“Once you get into the process of making 1,000 pizzas a day, you start to think about the little things that make it all easier and more productive so that you make your pizzas faster.”

Epstein and his team went to great lengths to preserve as much of the building as possible. The original 1927 tin roof was taken down tile by tile and reinstalled. The restaurant’s 20,000 bricks were pulled apart, cleaned individually and then re-cemented. The signs on the walls were photographed using a 360-degree camera and then rehung in exactly the same place in the new building.

Epstein says he knows most businesses wouldn’t have gone to such lengths to recreate the space. But not all businesses are Shakespeare’s. “In some ways, it makes no sense,” Epstein says. “But I think that we were so mindful of the old store and what it meant to the community and to us that, for some reason, we did these things because it just seemed like we had to.” 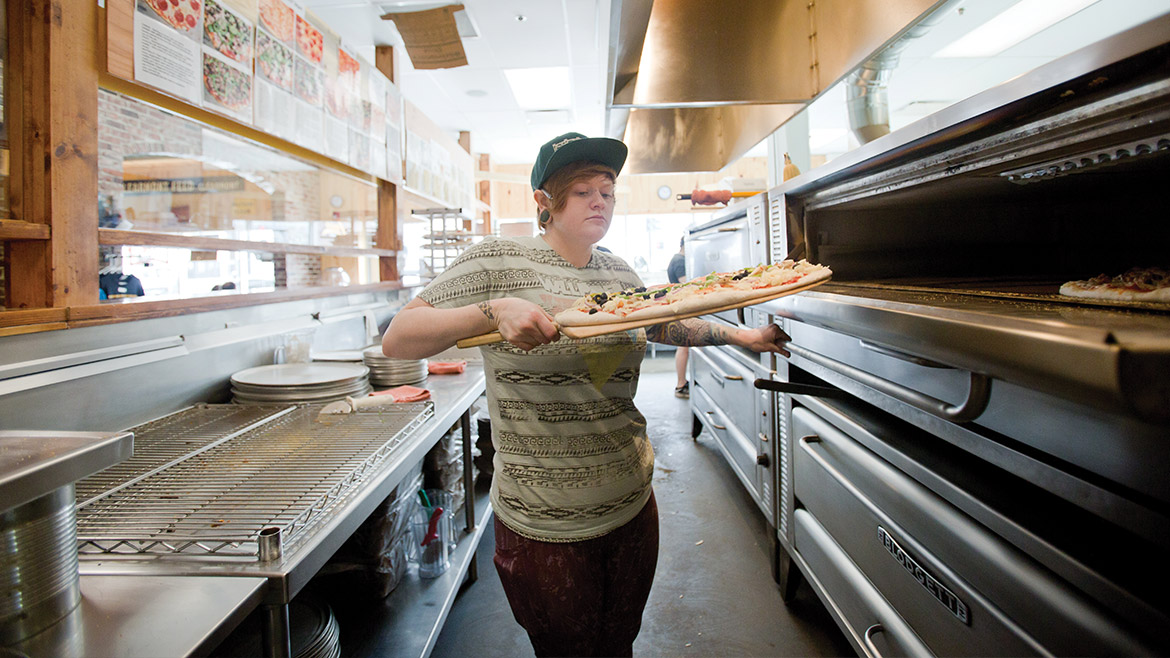 Even though it’s about 100 miles from Columbia, when you walk into Mark Twain Brewery in Hannibal on a Saturday night, it smells like a Shakespeare’s restaurant. That’s thanks to the Shakespeare’s frozen pizzas cooking in the brewery’s small kitchen space.

“It’s not a big, huge part of our business, but it’s really fun,” Mirtsching says. “I think what it points out is that there’s a strong demand for another Shakespeare’s in another location.”

The frozen pizza is made with the exact same ingredients used in the restaurants. The only difference is that the crust is par-baked (pizza jargon for “partially baked”) to accommodate a home oven. They’re sold in every Shakespeare’s store and in grocery stores, bars, and hotels around the state. Selling the frozen pizzas is a popular option for local fundraisers too.

“In this state, we have a very strong brand,” Epstein says. “When you’re a restaurant, you’ve been around for 45 years, you have to have been doing something right. Given our proximity to campus, I think that a lot of our sales do occur in St. Louis and Kansas City because of the brand and the nostalgia of Shakespeare’s pizza.”

Shakespeare’s frozen pizzas are in about 100 grocery stores around the state, mostly concentrated in St. Louis, Columbia, and Kansas City. Epstein says it’s no coincidence that St. Louis, the city with about 25,000 more MU alumni than anywhere else in the state, has the highest number of grocery stores selling the pizzas.

Shakespeare’s fans who live outside of Missouri probably won’t be seeing frozen Shakespeare’s pizzas in their freezer sections anytime soon, sadly. Mirtsching says the company is still focusing on growth closer to Columbia. The good news for MU alumni out of state? Shakespeare’s now ships frozen pizzas to 23 states.

Jason Gregory, the director of operations at Mark Twain Brewery, says his customers love seeing Shakespeare’s pizza on their menu. For many, it brings back the nostalgia of college days in Columbia, or the excitement of gathering at Shakespeare’s after a home game win. That feeling never changes.