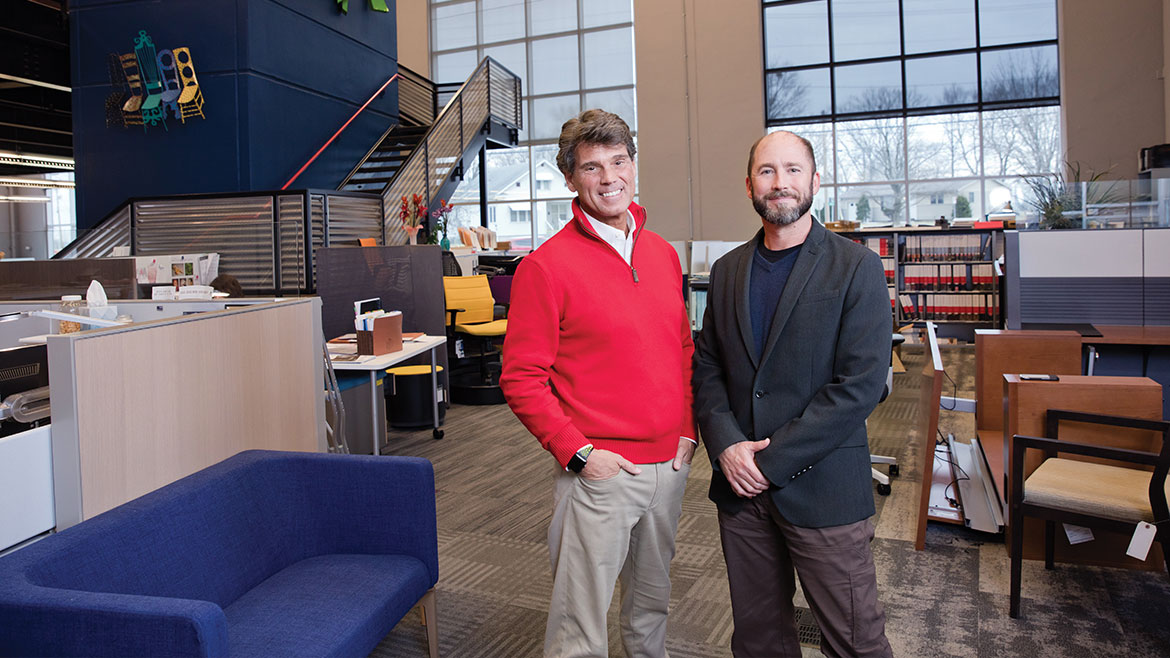 Frank Sovich, who’s worked for the company for 15 years, bought Wolff out of his shares earlier this year. “I acquired Marathon — the building, the real estate, and the shares — from Greg in late January,” he says.

Wolff started Marathon in 1987 as a Xerox vendor. Over the years, the company morphed into a commercial interiors business that now includes office furniture, commercial flooring, and a window treatments division. They are also the Steelcase dealer for Mid-Missouri. “Steelcase is the largest manufacturer of commercial furniture in the world,” Sovich says.

Their Mid-Missouri coverage includes 40 counties reaching from the Iowa border all the way down to Rolla. With that much coverage area, it takes a village to keep the company running smoothly and efficiently. Sovich relies on his 25 employees and Patrick Marks, vice president and partner in the business, to help. 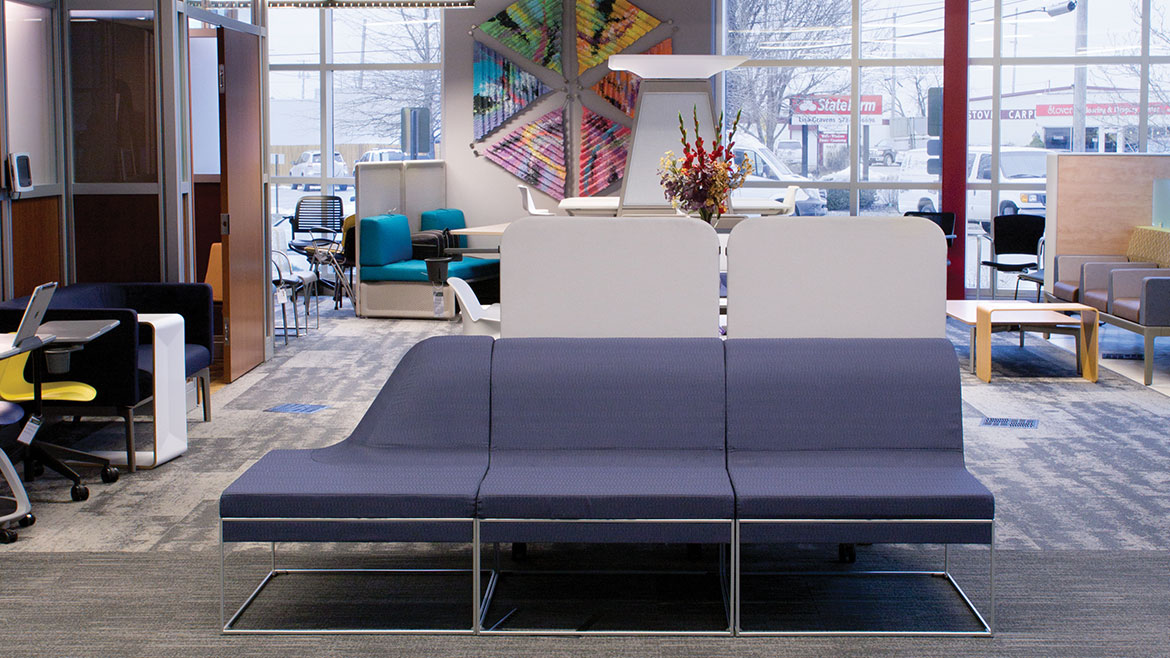 Sovich joined Marathon as a partner in August 2004 after a chance conversation with Wolff.

Marathon had just moved into what is now their current office on Paris Road when Sovich came on board. “At that point, our furniture department was established and expanding, and the flooring division was growing at a fast pace,” he says. “Currently, the furniture division represents about 50 percent of our business and the other two divisions, commercial flooring and window treatments and awnings, are about 25 percent each.”

When asked about his day-to-day work, Sovich says it probably doesn’t look too different from any other business owner’s. “I’m just like anybody else. I have clients to take care of and I oversee the furniture and design divisions as well as managing the overall functions of the company as a whole,” he says.

Marks started with Marathon in 2015 as a consultant. “I was asked to help organize and streamline their inventory management procedures and to assist with the implementation of a new order management software system,” he says.

In November 2016, Marks was asked to join the team full-time in the interim operations manager role. Once that role was filled, he was asked to become the interim chief financial officer. “In September of 2017, I was offered ownership in Marathon and I accepted. I am currently the vice president and general manager,” he says. “I see great potential in the future of Marathon. All of our divisions have been growing and continue to grow.”

Sovich readily offers up praise of Marks and his role in the company. “I have told him numerous times, privately and publicly, that I am just glad he is a part of the team,” he says.

Due to new tariffs, costs of certain materials have increased. Sovich has seen the effects of this from some vendors that rely on parts from China, but so far, the consequences have been minimal. The reason is twofold.

First, most of the Steelcase furnishings are manufactured in North America, so the tariffs only affect parts Steelcase orders from overseas, Sovich explains.

Second, he says that increases from their major vendors is normal. “In our industry, it’s nothing to see an annual increase. Last year, Steelcase had two because of the anticipated tariffs,” he says. “We’ve seen increases from certain vendors, but there have been some that we haven’t seen at all.” 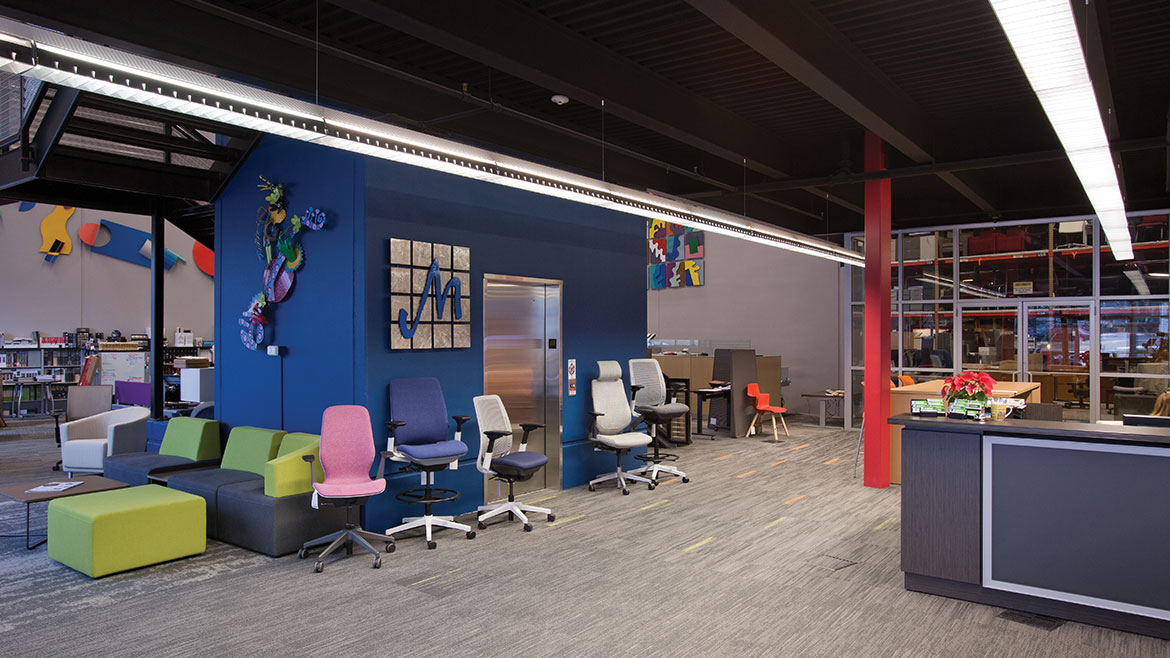 On average, Marathon brings in $8 million to $9 million in revenue each year, but Sovich would like to see that number increase to over $10 million. He plans on doing that by keeping his clients happy.

“My goal year in and year out is simply to keep our team gainfully employed. And that’s what we do. We set out to keep our clients, internal and external, happy with our products and completely satisfied with our service,” he says.

Sovich says that, on average, people will spend a third of their lifetime at work, so Marathon provides a work environment with a comfortable, creative space to be productive and still enjoy the workplace.  Marathon works with its clients to achieve the same goal.

Marathon recently worked with a new client, American Outdoor Brands, to help furnish their new facility on the east side of town.

One of Marathon’s current projects is the new Little Dixie Construction business office, off of Stadium Boulevard, which Marathon is furnishing. Marathon has also worked with MU and Shelter Insurance over the years as well as general contractors in the area, such as Coil Construction, Professional Contractors & Engineers, Grove Construction, and Randy Adams Construction.

Sovich also points out that many of the awnings people see above downtown storefronts are the work of Marathon. Awnings are a part of the Pioneer Window Works division that they acquired about nine years ago. “Pioneer Window Works was a 60-year-old company based here in Columbia that we purchased from the owner, Larry Schuster,” says Sovich. “He’s still a valued team member.”