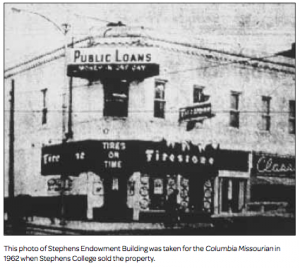 It’s somewhat amazing that it’s taken more than 30 years to replace the parking lot at the northeast corner of 10th and Broadway with a four-story apartment house that’s now under construction. Almost as startling is the underutilization of the half city block on Locust Street between Seventh and Eighth streets, the most recent nexus of community angst because the OPUS group wants to build a four-story apartment house there. In both instances, the assessed valuation and concomitant tax increases on these parcels will principally benefit the Columbia School District once they are completed. This is good news considering the amount of tax-exempt property across the city owned by various medical and educational entities, the largest of course being the University of Missouri.

A flashback to the early 1960s reminds us of how much property Stephens College used to own. Beginning in 1957, the college began to divest itself of a number of buildings and tracts and returned them to the tax rolls with a combined assessed valuation at the time of around $300,000. This brings us to the northeast corner of 10th and Broadway that until May 27, 1983, was the site of the Stephens Endowment Building. An early morning fire of suspicious origin gutted the historic structure, so it was razed and replaced by a surface parking lot that has been shared by several downtown businesses for the past 30 years.

The original two-story brick structure on that corner was built in 1880. On March 31, 1905, Stephens College bought the building using funds from the sale of 16 houses that had been given to the college in 1876 by James L. Stephens. The college rented the premises, and the proceeds endowed Stephens, but the building remained exempt from taxation. This changed on Jan. 30, 1962, when Stephens announced it was selling the building to the Kelly brothers — James, Sherman and Glenn — who owned Kelly Press at 201 S. Eighth St., which is not far, ironically, from the site OPUS wants to build on and includes a building that at one time was a Kroger grocery store.

The sale price of the Endowment Building was not disclosed, but with enrollment surging and more than 1,700 students on campus, Stephens was on a roll with plans underway to build the $4.3 million Library and Learning Center on East Broadway. Other properties the college had already sold included two tracts at the southwest corner of East Broadway and William Street subsequently occupied by two medical office buildings and the College Lodge at the southeast corner of Bass and College avenues. A building and a parcel associated with the college’s aviation program represented curious investments in their day. The Sinclair Pennant Hotel built in 1929 across from the old Municipal Airport, now Candlelight Lodge, was used by the college as a dormitory but sold to the Gross brothers in 1959. A group of Quonset huts on the north side of Hinkson Avenue in the 1700 block was sold in late 1961 to a St. Louis developer who built three detached buildings in what was advertised at the time as garden apartments.

While some curse and fume at the surge of construction across the city and especially downtown, it’s a reminder of the startling increases in tax receipt revenue as parcels accrue in value through development. A finger wag to those condemning development who also happen to be employed by the institutions that benefit from enrollment growth and need to house these “clients” of our educational plant — albeit temporarily — as they live and spend amongst us.

A City Forecast Amid Change

Opinion: The Expansion is Coming

Opinion: The Call for Full Disclosure