In 1969, Hee Haw, The Brady Brunch and Room 222 made their debuts on TV, Hollywood released the blockbuster Butch Cassidy and the Sundance Kid and Neil Armstrong walked on the moon. In the same year, Joe Machens purchased his first car dealership, which lead to the creation of a multi-franchise company and made him a household name.

“We’ve branded the Machens name for 44 years,” says current owner Gary Drewing. “It is something we are very proud of.”

Drewing joined company in 1983 as a partner and general manager. Following Machens’ death from a long illness in 1997, Drewing partnered with Joe’s son, Dave Machens, and eventually bought out the younger Machens in 2006 to become sole owner of the company.

Although Machens has expanded considerably since its humble beginnings 44 years ago, 2013 has been exceptionally productive. In February they opened the Machens Auto Outlet, which offers wholesale-priced vehicles to the public. Two months later after buying Fletcher Chrysler Dodge Jeep Ram on Providence, they opened Joe Machens Chrysler Dodge Jeep Ram. October saw the grand opening of the Joe Machens Toyota Scion facility, which to date is the largest Toyota Scion dealership in the state of Missouri. In the same month, the old Toyota Scion facility on Bernadette became home to the Joe Machens Pre-owned Supercenter, which Drewing says will also be used to service, recondition and detail pre-owned vehicles.

Mary Jo Henry, Joe Machens director of marketing, says she feels customers benefit greatly with each expansion. “This gives us the opportunity to give the mid-Missouri area many choices with their vehicle purchasing and servicing,” she says.

For Drewing, the newer facilities allow the company to raise the customer experience to a new level, which he feels is important in today’s competitive environment. “Whether it’s for parts or service or buying a car, we want them to experience the wow factor,” he says. “We track our market share quite closely, and we think it’s right at 80 percent in this area.” Their target market additionally includes surrounding areas.

“We probably sell 65 percent of our sales outside of Boone County,” Drewing says. “Our goal is for each of our franchises to outsell everybody in the St. Louis and Kansas City areas.” In this respect, the Internet has become the company’s No. 1 marketing tool.

“A conservative estimate is probably 80 percent of our buyers are on our website before they visit any of our locations,” Drewing says.

Although a recognizable name and expanded locations and services are important, Drewing believes providing exceptional customer service will always be the key ingredient for success. “The main thing we stress with every meeting, with every franchise, with every store, with every employee is customer satisfaction,” he says. “Our goal is not to sell them one vehicle; we want to sell them 15 vehicles. We want them to tell their neighbors, their friends.”

Henry echoes Drewing’s words. “Our No. 1 priority at all of our stores is our customer satisfaction,” she says. “We like to think that we’ll take such good care of them that they won’t even consider another dealership for their vehicle needs.”

Today, with 15 sales locations offering Ford, Lincoln, Toyota, Scion, BMW, Mazda, Mercedes-Benz, Mitsubishi, Hyundai, Nissan, Volkswagen, Fiat, Chrysler, Dodge, Jeep and Ram; two body shops; and a rental department, the company is doing well indeed. “Our biggest competition is often our own dealerships,” Drewing says. But he also feels there is room for future growth and plans to look for more opportunities in 2014. For instance, though the Joe Machens Ford Lincoln store on Worley has held the title of the No. 1 store in the state for 17 years, it’s on the drawing board for a makeover. The business also expects to increase its total number of employees: from 920 to over 1,000.

Henry says, overall, they will continue to look into opportunities that are good business decisions.

“Our goals are very high,” Drewing says. “I have an old saying: You either get better, or you get worse. Our goals go up every year, and we try to get more market share in all areas.”

Drewing believes Columbia is the ideal location to make this happen. “We love Columbia,” he says. “I always say, ‘Columbia is not only a great place to live but a great place to be in the automobile business.’ We don’t think there is any market better than Columbia.” 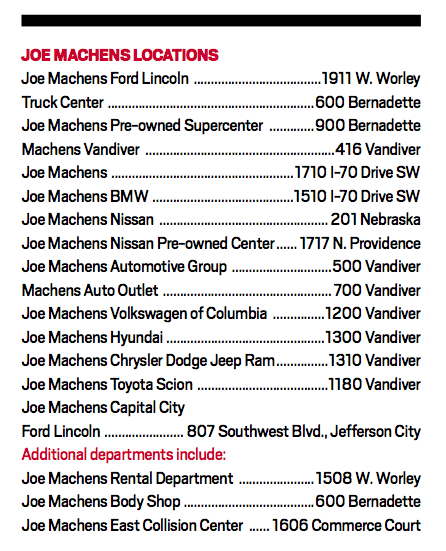