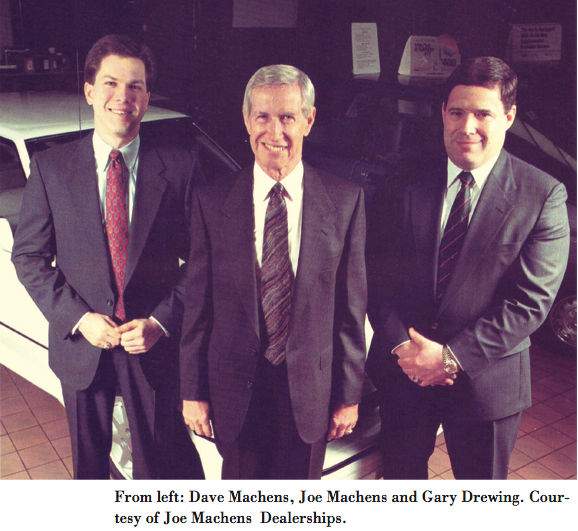 The 1980s were a decade of growth and change for Joe Machens Dealerships. The company had already grown exponentially from 1969, when Joe Machens first purchased the Ford franchise located downtown in the building that is now the Fieldhouse bar on Broadway.

By 1985 the dealerships had moved to their present location at 1911 W. Worley; the company had acquired four foreign brand dealerships and created the Joe Machens Import Center; and Gary Drewing, the current owner of Joe Machens Dealerships, had been hired as general manager.

“I started here on Tax Day, April 15, 1983, and Joe Machens Dealerships only had 34 employees at the time,” Drewing says. More than 30 years later, Joe Machens employs more than 1,150 personnel across 16 different franchises.

In 1985, all five of Joe Machens’ Dealerships most popular vehicles were Fords: The Ford F-150, the Tempo, the Taurus, the Ranger and the Escort were all top sellers. Although the F-150 has maintained its top spot throughout the years, Drewing says not much else from his early days at Joe Machens Dealerships has remained the same.

“Between now and back then, I think the automobile business as a whole has done four or five total 360 degrees,” Drewing says.

The technology of the time proved to be a substantial agent of change in the way day-to-day business was held. One thing Drewing says he doesn’t miss from the “good old days” of his career is sorting through piles of paper to look for inventory; he prefers the more advanced computer system in place today. “Truthfully I don’t know how we functioned back then the way we did it because it was pretty much in the stone ages,” Drewing says of their paper-based inventory system.

Growing with a city

When Joe Machens Ford originally moved to its location on West Worley, it was almost the only business in the area, with the exception of a Kmart, a Catholic church and a few smaller shops. However, as Columbia grew, it provided Joe Machens Dealerships with new opportunities for growth.

“I thought Columbia was a great place to live in the ’80s; it’s even a better place to live today with the growth of the city, the new businesses, the hospitals, the schools and everything else,” Drewing says. The immense growth of the city allowed Joe Machens Dealerships to expand to more than 18 locations and, as of last April, hold an 82 percent market share.

Although Drewing says the company’s vision has always been to expand and grow, he is quick to point out that those goals would not be possible without the myriad employees and personnel involved with the business.

“We’ve added a lot of people over the years and a lot of personnel to help us get to where we are today,” Drewing says, adding that with the high longevity of its employees, the Joe Machens Dealerships family has grown substantially.

In his more than 30 years with the company, Drewing admits he’s worn a lot of different hats, but with each change he’s seen the company grow, and he hopes to see the trend continue for years to come.