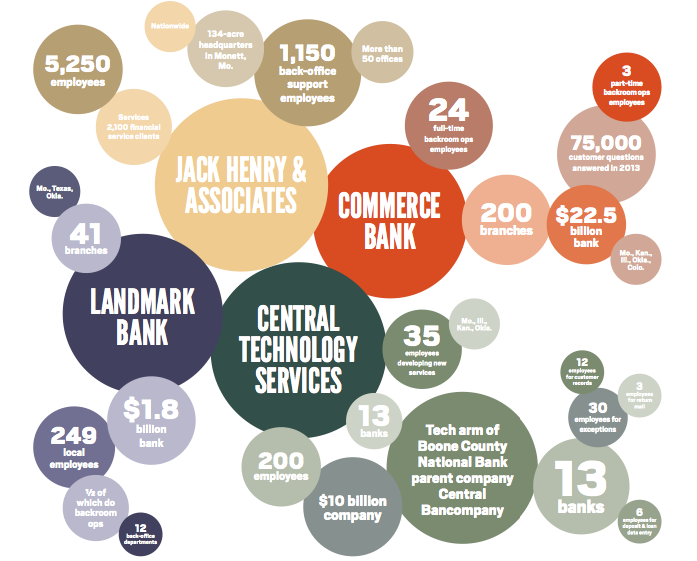 New York, Charlotte, Chicago: All are well known as cities where American banking business gets done.

Add the Columbia area to that roster of financial centers, in spirit if not in trillion-dollar assets. More back-office banking operations spanning several states — or in one case, the nation — are based in southern or mid-Missouri than many might expect. Some are based right in Columbia.

Although the particular company histories that prompted these back-office banking operations to lay their foundations in Missouri vary, their reasons for staying generally boil down to hometown loyalty. Doing business in Missouri may offer financial benefits — a lower cost of living, less expensive land — but bank leaders say those advantages are not what keeps them where they are. Instead they point to loyal employees, the value of a small-town atmosphere and historic attachments to the communities in which their businesses matured.

“This was home,” Jack Henry & Associates Inc. President Tony Wormington says of Monett, Mo., where the S&P 400 company is headquartered. “So we remained here.”

Here are snapshots of regional back-office banking operations based in Missouri’s backyard.

Central Columbia is the home base for Landmark Bank’s tri-state back-office operations, though no single building houses them. Landmark’s back-office employees work out of a handful of Columbia locations that they share with company retail operations to provide support for all the bank’s 41 locations in Missouri, Texas and Oklahoma.

Roughly half of Landmark’s 249 Columbia employees help with those operations, though many bank employees serve in both retail and back-office roles, says Landmark Chief Administrative Executive Sabrina McDonnell, who runs the company’s support services. Whether single or dual purpose, those employees staff nearly a dozen back-office departments focusing on services for the $1.8 billion bank that range from accounting to information technology. There’s the item processing department, which oversees check payments, and the operations department, which includes about seven loan processors who prepare the paperwork required for a closing. Electronic banking department employees help both customers and bankers with Internet banking questions and other electronic products and services, such as debit cards and paperless statements.

And there’s the product development and management department, the section that focuses on service innovations, which recently came to the fore to help roll out Landmark’s Video Teller service last August. Billed as the first of its kind in Missouri, the service features off-site tellers who use video conferencing to interact directly with customers at remote locations. Right now it’s available at only a few Landmark locations — including the Stadium Boulevard bank in Columbia — but McDonnell says she believes Video Teller eventually will allow the company to provide better service to a host of customers living in smaller communities that don’t have late or weekend banking hours. “We think it’s going to allow us to enhance service pretty dramatically,” McDonnell says.

Landmark’s back-office services — and the groundbreaking products they launch — originate in Columbia partly because of the bank owners’ ties to the community, according to McDonnell. But McDonnell says there’s more to it than that. Columbia is among the Landmark network’s largest host towns, she notes, with a ready pool of talented employees and an ambience that draws recruits.

“We place our departments wherever it makes sense at the time,” McDonnell says.

CTS is the technology and services arm of Central Bancompany, a $10 billion parent holding company for Columbia’s Boone County National Bank and 12 other banks in Missouri, Illinois, Kansas and Oklahoma. Based in Jefferson City, CTS houses about 200 employees to provide technology and day-to-day operations services for all the holding company’s banks, says Russell L. Goldammer, CTS CEO and president.

About 35 of those technology professionals focus on developing new services requested by the holding company or individual banks within its system, Goldammer says. So when Central Bancompany calls for new person-to-person payment or digital wallet services, it’s CTS technology experts who respond.

Other CTS technology employees handle regular maintenance and support for the banking data center located in the Jefferson City headquarters and operate a central technical help desk that resolves the vast majority of calls for assistance from their desks. Six CTS technology professionals are dedicated to data security, Goldammer says, and install and manage security systems throughout the banking network.

About 85 of CTS’ employees work in operations and services and perform a wide array of daily services. For example, three full-time employees are dedicated to handling return mail. Between 5,000 and 8,000 pieces of conventional mail are returned to the company’s banks each month, Goldammer says, and the CTS employees seek to determine why and find the proper address for those customers. Another roughly 30 employees deal with exceptions — such as disputes or special requests — and other deposit services, and a half dozen other employees provide Internet banking help for business customers, he says. About a dozen CTS operations and services employees create and maintain customer records in the company’s mainframe computer system, and six more employees enter paper deposit and loan records into a document imaging system.

Why center most of this activity for a four-state banking network in mid-Missouri? Goldammer points to the company’s origins in Jefferson City. CTS enjoys a loyal workforce because of that history, he says, a group of employees willing to stay with the company for years longer than is common elsewhere.

“We give out more 40-year employee pins here than anywhere I’ve ever seen,” he says.

Jack Henry provides computer systems and complementary products and services for 2,100 bank and credit union clients throughout the United States. The Monett, Mo.-based company primarily serves small and mid-sized institutions, including Hawthorn Bank and the Missouri Credit Union in Columbia.

About 1,150 of Jack Henry’s 5,250 employees — or more than 20 percent — work out of the company’s 134-acre corporate headquarters to provide back-office support. Jack Henry’s business analysts and software developers are based at the southern Missouri office, where they develop and maintain the accounting software that banks need to perform everyday tasks such as posting transactions or creating monthly statements, says Wormington, the company’s president.

“They all are doing business nationwide,” he adds.

Although Jack Henry has more than 50 offices throughout the country, Wormington, who describes himself as “employee No. 6” of the company launched by Jack Henry and Jerry Hall 38 years ago, says the company’s headquarters is in its present location because its founders were from the area and didn’t want to move. Employees benefit from Monett’s relatively low cost of living, Wormington says, as well as its small-town atmosphere.

“The state of Missouri is home,” Wormington says.

Columbia houses several back-office teams for Commerce Bank, a $22.5 billion company with more than 200 branches in Missouri, Illinois, Kansas, Oklahoma and Colorado. Twenty-four full-time and three part-time employees provide these back-office services for the Commerce network out of the bank’s Bernadette Drive location, according to the bank’s public relations representatives.

Among the back-office services based in Columbia are those provided by Commerce’s seven-member branch support team, which helps bankers with questions on everything from procedures for opening certain types of accounts to benefits and prices for retail products. Company representatives estimate this team answered approximately 75,000 questions in 2013. Another seven employees—four full-time and three part-time—work on new account compliance requirements and fraud review tasks along with other online banking service jobs. Commerce’s seven-employee risk mitigation team coordinates several review tasks, including reviews for checks that have been flagged for possible fraud and online bill pay fraud. Other Columbia-based back-office employees include a two-person technical writing team, which produces and updates policy, procedure and training documents while maintaining online training courses for bankers and an intranet resource website, Commerce representatives say.

Locating these services in Columbia was a common-sense decision, Commerce Bank Executive Vice President and Director of Branch Operations Carol Dickinson says in an email. Commerce employees with back-office expertise already were located in Columbia when the function for the entire company was formally established in 1999. And Columbia’s central location made travel to the bank’s various markets easier for the back-office teams, she adds.

“Ever since that time, technology has made collaboration very easy with all parts of the company,” Dickinson notes in the email. “While we still travel to the various markets at times, we make good use of communication tools that make our work more of a virtual environment.”