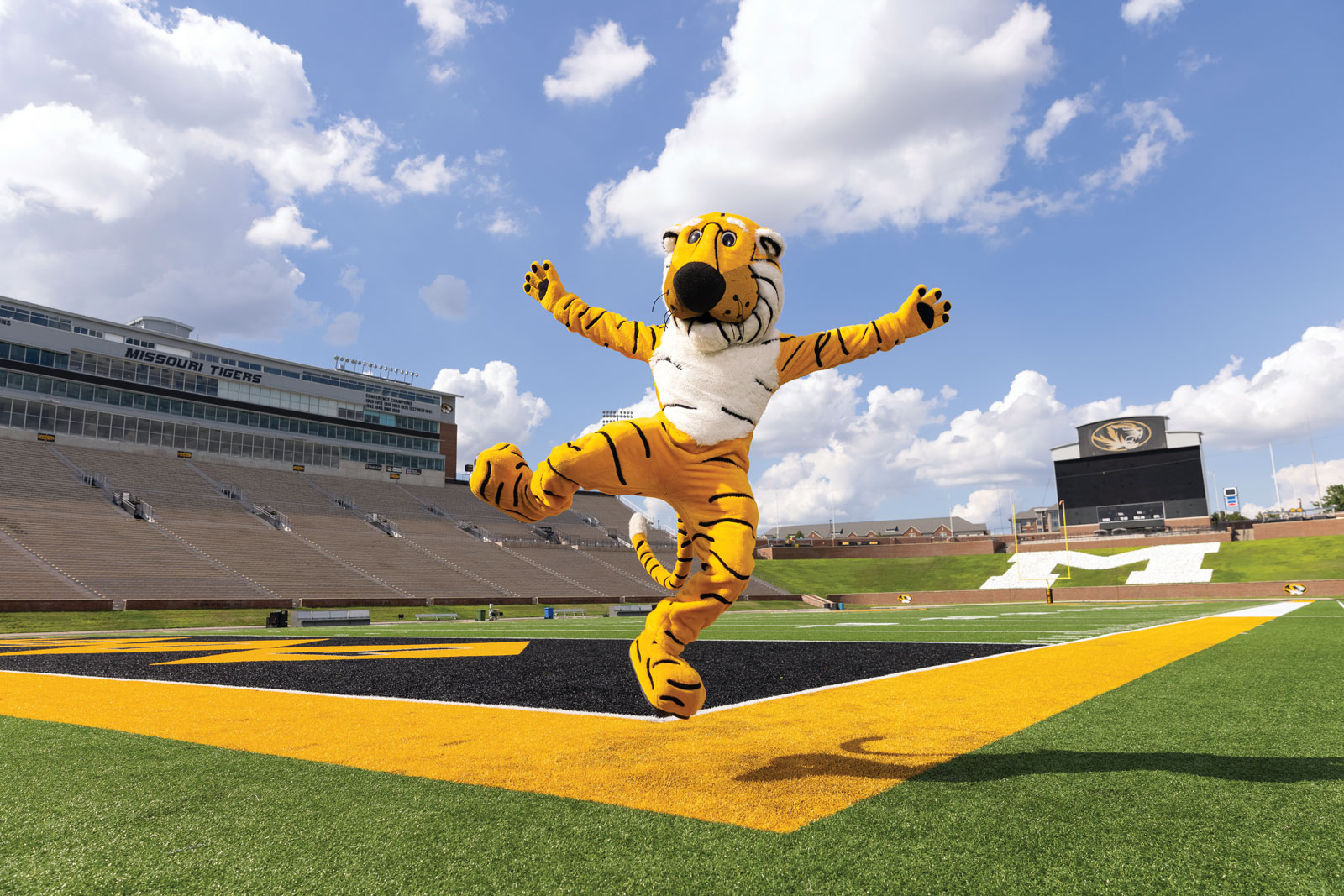 How much do we really know about Columbia’s favorite tiger? Discover what goes on behind the scenes to make Truman the lovable icon he is.

There is only one being that encompasses the heart of all Mizzou sports. For so many who grow up in and around COMO, interacting with him — whether it be a high-five, dancing, or anything in between — is a rite of passage. The black-and-gold tiger doesn’t just represent Mizzou; he is Mizzou.

At over six feet tall and still growing according to his Mizzou roster biography, he leaves big shoes — or rather paws — to fill. Besides that, who else is dedicated enough to make it to literally. every. single. MU athletics game?!

To know him is to love him.
He is Truman the Tiger.

It’s hard to imagine a time before Truman, but the truth is the mascot didn’t earn his official name until 1984. His origin story dates back much further than that; it goes all the way back to the 1890s when MU’s first football team chose its name. The name “Tigers” refers to and honors a militia unit of the same nickname comprised of locals who defended COMO from guerrilla bands during the Civil War.

Students have been portraying tiger mascots at MU since the 1940s. At that time, members of the Tiger Claws pep squad were behind the mask. The bodies of the early costumes were made of yellow cloth with stripes painted on and the head was made of papier-mâché. Back then, there were two tiger mascots, a female (Lil’ Tiger) and a male (Big Tiger).

In the 1950s, the school’s mascot entered pop culture in a big way, appearing on posters, clothing, publications, and more. One example is the St. Louis Post Dispatch, whose “Weatherbird” cartoon artist from 1932 to 1981, Amadee Wohlschlaeger, drew covers for many of Mizzou’s football game programs from 1959 until the mid-1990s.

Another example of the mascot’s growing popularity was when Peanuts creator Charles Schulz joined the fun and created his own Peanuts version of a football game program cover for the 1956 Homecoming edition of The Maneater.

In 1981, Lil’ Tiger and Big Tiger merged together and became one singular mascot. The new mascot went nameless for three years until the MU cheerleaders held a “Name the Tiger” contest in 1984. The contest was meant to raise money for a carrying case for the mascot. The winner, as we all know, was Truman, an homage to the 33rd U.S. president and Missouri native, Harry S. Truman.

Former Director of Athletics Joe Castiglione roped in Festus native Joe Turnbough and his team to assist with the design of Truman’s costume and development of his overall personality. Two years later, the Truman the Tiger we know and love today made his first appearance at the Missouri-Utah State Football game on September 13, 1986. This date is now considered Truman’s birthday and celebrated each year by fans in honor of his first appearance.

In 2004 and 2014, Truman was named “Best Mascot in the Nation.” Truman makes more than 400 appearances a year, including  MU football and basketball games, as well as at hospitals, schools, community events and campus gatherings.

Recently, Truman won “Most Collegiate Mascot” at the National Cheer Association’s Cheer Camp, which secured him a bid to the national competition.

Cynthia Metz, MU’s head cheerleading coach and mascot coordinator works closely with the big cat and had this to say about our favorite Tiger: “Truman is Mizzou’s No. 1 fan. He is the face of the university and the athletic department and brings so much joy to the kids and fans who are watching. It’s so fun to see him interact with people at games and the way their faces light up. It’s a privilege to be a part of that.”

What years were you the Mizzou mascot?

What made you decide to audition?

I always loved athletics. Being the mascot gave me the opportunity to go to every game, and be right on the sidelines. But when I was a cheerleader (the year prior to becoming mascot), I met my future wife, Sherry, on a bus trip to a football game at Ohio State. Shortly after we came back, we started dating. I tried out for her; to go on trips together, to partake in dances with her during games, and to just be around her.

Are there any insider secrets you can share about being the MU mascot?

We pretty much all know each other and stay together. It’s a different type of camaraderie; a pretty small, special club.

Can you tell me about a memorable experience you had as the mascot?

At that time, we were in the Big Eight Conference, and we played a basketball tournament in Kansas City every year. Running up the middle of the KU crowd as the Tiger was quite an experience! KU fans would throw fruit – bananas, apples, you name it. I would describe it as a “fun-hate.” We had such a great rivalry that everyone looked forward to it.

What was the most challenging part of being a mascot?

The physical part, especially being inside that suit when it’s 100 degrees out. At that time, the helmet was full of fiberglass and supports. Then, it was allowed and even encouraged to remove the head. Not only because of the materials, but the tiger head looked ferocious and would sometimes scare kids. Taking it off made me more approachable.

What did being the Mizzou mascot mean to you?

I knew from the start it was going to be a blast. The ability to relate to kids meant a lot. To be able to relate to the kids, and to be able to talk about what the tiger mascot does as far as motivate the team. Being able to be a part of what was going on at the university at the time and being a part of something bigger than myself was everything.

What years were you Truman?

Can you tell me the story of how you became the mascot?

I met a girl! Which is okay because I ended up marrying her! Molly was a cheerleader, and my friends were in a band playing in the bar we met. I grew up in COMO, and my mom always wanted me to be the mascot at Rock Bridge. I always thought, “those guys are dorks,” but when I met the men behind Truman through Molly, I realized how cool it was, and she convinced me to do it.

It was the same time as cheer tryouts. We went through an interview process focused on us understanding that it’s a yearlong commitment where we needed to have drop-of-the-hat, same-day availability. Being Truman supersedes everything short of class. We put the suit on, the fight song started, and we had to run out and be Truman for the song. A lot of being a mascot is improv, making stuff up as you go along, so they dumped out trash bags with hula hoops, Hawaiian skirts, etc., and started playing Hawaiian music. It’s a test, to see if you can you take those items and make people laugh.

How much of a time commitment was it?

It varied. We met with coach Monday nights where we would get the rundown of where Truman needed to be that week. When I was Truman, we were responsible for finding our replacement for any event we couldn’t make.

Can you tell me about a memorable experience you had as the mascot?

Riding in the fire truck, especially after growing up in COMO and watching it as a child. Everyone’s watching the field, everyone’s waiting for Truman. Knowing there are 60,000 people watching you — that’s pretty dope. I get goosebumps just thinking about it!

Another one of my favorite experiences that I still can’t believe they let me do is when we went to Whiteman Air Force Base for a family day. Truman, the cheerleaders, and the golden girls went. At one point, I was asked to do photos by the B-2 bomber. They asked if I wanted to go inside, and I said “Are you kidding me?! Of course I do”! So, I went in, and I have a picture of Truman looking out the window of a B-2! We all have those crazy, one-off stories. When you’re Truman, everyone knows you, loves you, and wants to see what you can do.

What does Truman represent to you?

Everyone knows of the student-athletes, but if one of them walked by you on the street would you recognize them and know who they are? When Truman walks down the street, you know. There’s no mistaking who Truman is, you know what he’s about and what he’s doing. That’s the embodiment of Mizzou athletics. Different athletes switch through, but Truman’s always there.