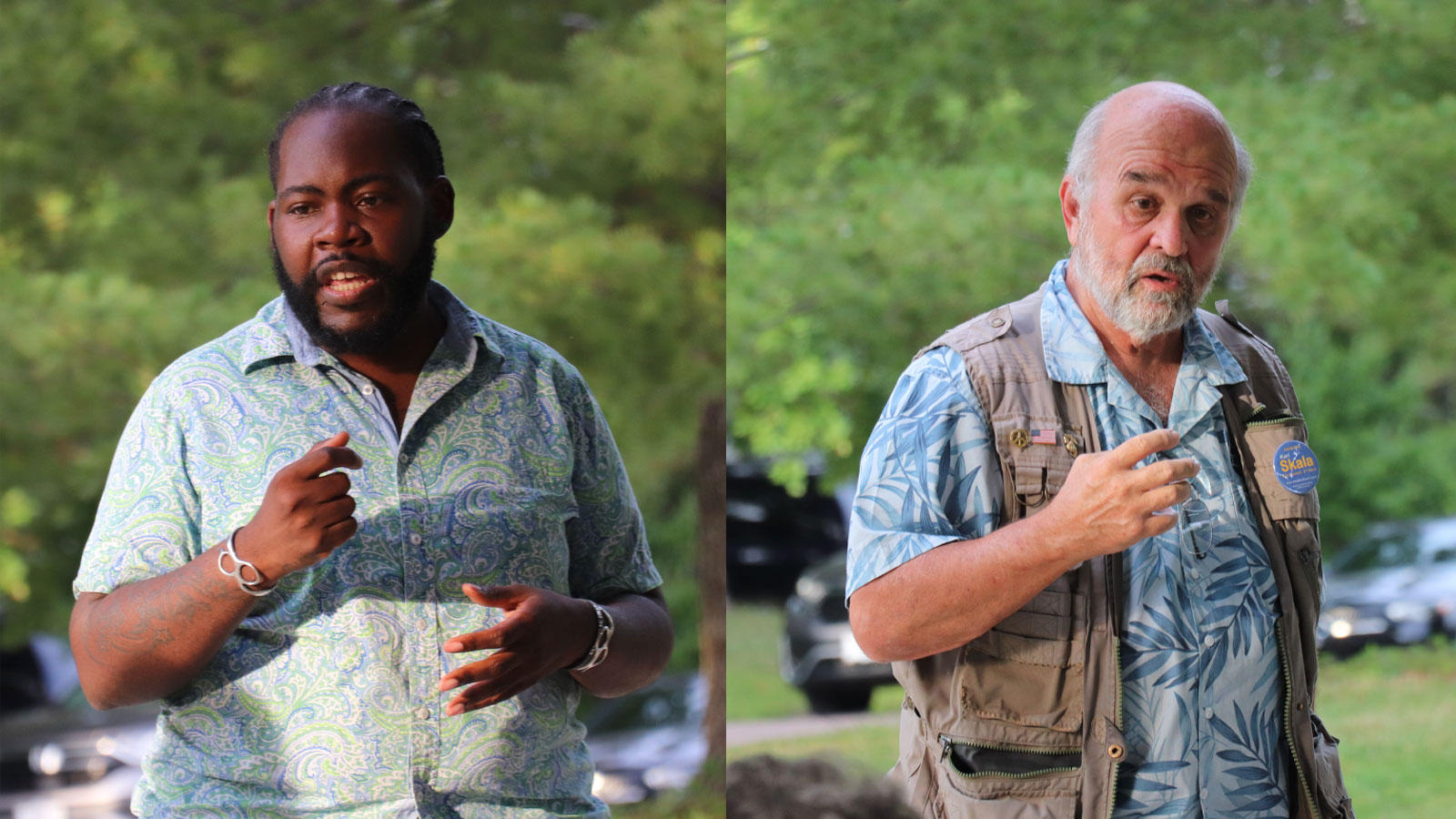 If city councilman Karl Skala hasn’t changed much in more than two decades of public service to the city of Columbia, the city around him certainly has. When he first ran for election to the city council from the third ward in 2007, Skala’s progressive views on responsible growth and development clashed with business interests but resonated with a concerned electorate and his victory established a new left wing to the council’s partisan politics. But by 2020, and the election of Pat Fowler from the first ward, the foremost concern of the council’s most progressive members and likeminded citizens had evolved to the pursuit of equity and social justice for the city’s most disadvantaged.

Now 75, Skala is the longest-serving member of a city council known for its dysfunction and ineffectiveness. Facing re-election, headwinds of change, and voters who may view his considerable experience as more liability than asset, he met with potential successors last year. After determining there were no other qualified or suitable candidates willing to run, he decided to stand for a fifth three-year term.

One of the spurned potential successors was 38-year-old Roy Lovelady, who rose to prominence organizing peaceful protests and appearing before the city council amid outrage over the May 2020 death of George Floyd at the hands of a Minneapolis police officer.  Lovelady felt he was being ignored by council members and decided to run for Skala’s seat. The result was a stunning tie in the April municipal elections with 1,102 votes each.  A second election just for Ward 3 voters will take place during the regular Aug. 2 primary election. With stark differences between the candidates, the outcome will have consequences for the entire city – in particular how the city council continues to grapple with issues involving its police department.

Columbia’s six wards each have more than 20,000 residents – about the same as cities like Sedalia, Warrensburg or Rolla – and take on their own personas. The third ward may be the most eclectic. It’s largely northeast over I-70. Route B extends through the middle, connecting many of Columbia’s industrial jobsites with aging, working-class neighborhoods. There’s uncomfortably high poverty and crime in pockets throughout the ward, particularly around Clark Lane west of Ballenger Lane. But east of Ballenger has bloomed with new construction of middle-class homes. Families and young professionals are moving into new homes in the growing area around Battle high school and elementary. And old neighborhoods like Benton-Stephens, Columbia County Club and tree-lined Woodridge have maintained their historic identities.

So, it’s no surprise the ward would produce a pair of opposing candidates with such divergent backgrounds and world views.

Lovelady, not yet 40, black and gay; moved to Columbia from Kennett to live with his aunt when he was 13, mom followed a year later; knows poverty; Gentry Middle School, Hickman High School; started earning money doing hair at 13, opened his own salon at 20, later added a dance studio; single, focused on his businesses; small D Democrat, has not been active in party politics, says he has some Libertarian views; founded Peoples Defense to speak out on injustice; renown performing drag artist.

Yes, drag queen. The nationally famous Mahajanay Demornay. And he thinks Skala is trying to use it against him, so he’s happy to talk about it and answer any questions.

“I’ve been doing drag since I was 21,” Lovelady said. “It has allowed me a lot of opportunities. I’ve travelled all over the United States doing it. And it’s been lucrative for me. I make money. And I love it because it allows me to put all of my talents and my abilities into one art form. I do hair, I do makeup, I dance and sing, I sew, I communicate. That’s everything that I do, all in one art form.”

Lovelady said when he decided to run for office, he also made the decision to be transparent about his lifestyle.

“So, there have been lots of people who say ‘You’re going to have to try to hide this,’” he said. “Why would I try to hide it? I still host shows locally. I’m unapologetically me. When it comes to sexuality, I don’t hide it. One thing you have to be, to be leader, is proud of who you are. I can’t represent anybody in the ward if I’m not comfortable with who I am. More so, I’m proud of who I am.”

Skala, who ran unopposed in his last election, admits he may have underestimated Lovelady, the candidate.

“I’ll admit, I was in a bubble,” Skala told members of the Benton-Stephens Neighborhood Association during a campaign talk recently. “People told me I was going to win by two-thirds. I thought, well, that sounds good. That makes sense.”

Skala’s path to the city council began shortly after moving into the Meadowlands subdivision when a planned commercial development threatened to change the character of his new neighborhood. He helped organize the Hominy Branch Neighborhood Alliance, brokered a compromise with the developers, and ended up with an appointment to the city’s planning and zoning commission. Seven years later he won his first election to the city council. He also served on the city’s former Environment and Energy Commission. He believes that’s the appropriate experience for a city council member.

“One of the things that bothers me the most is I would be perfectly willing to turn this over to somebody if there was somebody who at least showed interest in getting involved in some of the board and commissions and show some interest in third ward issues,” Skala said. “But nobody surfaced.”

Lovelady said his leadership during the George Floyd incident and his experience before the city council speaks for itself. An unfortunate encounter with Columbia PD some years ago has also helped shape his perspective.

Lovelady said he was headed home from his salon, at the time near Rangeline and Business Loop, in his vehicle about 2 a.m. one night, when he cut across a parking lot with the car lights inadvertently off.

“It escalated because I didn’t want to take my side satchel off and they accused me of having a gun and the police office reached in my car,” Lovelady said. “I made a bad decision and crossed the parking lot with my lights not on, but it escalated from there. They beat me black and blue. But I lived to tell it. So, when George Floyd came out, I was so empathic I put myself in those shoes and thought that could have been me.

“Immediately people took to the streets and wanted to protest, to be violent and tear up,” Lovelady continued. “I’ve never been one that wants to destroy things. I just see it as ignorance. We have to have a better strategy. So, I got out and I knew these people. I’m part of the community. I talked to those people and they trusted me. They respect me. It went from tearing things up to be able to make a peaceful protest and get the attention of the council. And when we got the attention of council, I was asking ‘what’s next.’”

But when Lovelady appeared in front of the city council to talk about getting the city’s chokehold policy changed, he was disappointed.

“Every time I got before council, it seemed as if somebody was writing, somebody wasn’t paying attention, like my story just fell on mute ears because I didn’t look like them, or maybe because I may not talk like them,” Lovelady said. “I wasn’t a prevalent person in the community. It was like, ‘oh, here he come again.’ So, I decided if they are not listening to me, I’m going to run for this seat so that I can make sure that my voice is heard and that we can see some change.”

Policing issues have been among the most contentious on the city council. The council members are often divided on issues such as police department funding, the power and reach of citizen oversight, and racial disparity in traffic stops.

Councilpersons Matt Pitzer and Betsy Peters are generally considered the more conservative members of the council, and their votes have often been supportive of police positions. New Mayor Barbara Buffaloe came to office with well-known progressive views, but pragmatic and generally supportive of the police department. Skala, whose daughter is a retired cop from another city, is making it clear he’s a supporter of law enforcement.

He was referring to Councilperson Fowler, who’s not averse to asking hard questions of city staff and is also openly supporting the election of Lovelady. Fowler is the energy behind the council’s social justice consciousness and is often joined by likeminded councilpersons Nick Foster and Andrea Waner. Their views loosely align with the Columbia-based advocacy group Race Matters, Friends, which seeks to end racial inequities, promote equity and inclusion, and is deeply involved in Columbia’s policing issues. Columbia resident Kendra Jackson is treasurer for Race Matters, Friends and for the Lovelady campaign committee.

Lovelady said he believes we need police, but they should be held more accountable.

“When I think about policing, I think all the way back to why we even got police officers, and they were slave catchers,” he said. “I think that the mentality of the police department has not changed. It’s still catching slaves in my opinion. But I feel that we would have way more crime if we did not have police.

“I am not opposed to the police,” Lovelady continued. “I have said this over and over again. Chief Jones says what he thinks community policing is, and then what he thinks is happening, and he doesn’t see that the police are doing anything wrong. I see that as there’s no accountability for the police. You give them more and more money. They say they’re going to do this, this and this. But yet, it’s the same process. Where does the accountability lie? I believe, yes, we need the police. I do not think we need to defund them. But I think that when handing them more money, we need to hold them more accountable.

“They already police themselves,” Lovelady said. “When somebody makes a complaint, it goes to the chief first. Then he gets to make a decision if he feels like it needs to go to the Citizens Police Review Board, so it’s all the police policing themselves. Where do we get a guarantee that citizens have a voice and there is some accountability?”

“I’ve made the joke that I’m not sure who I’m going to vote for in this election,” Skala said. “After a while, you get kind of tired of being beaten over the head. But I’m definitely in it to win it. It’s frustrating because it’s not normally the way it used to be. I’m a little bit nostalgic for some of the earlier councils that seemed to gel a little better. Everyone seemed to be pulling in the same direction, including the public. They would try to encourage you to do certain things. It’s not that way anymore. It’s different.”