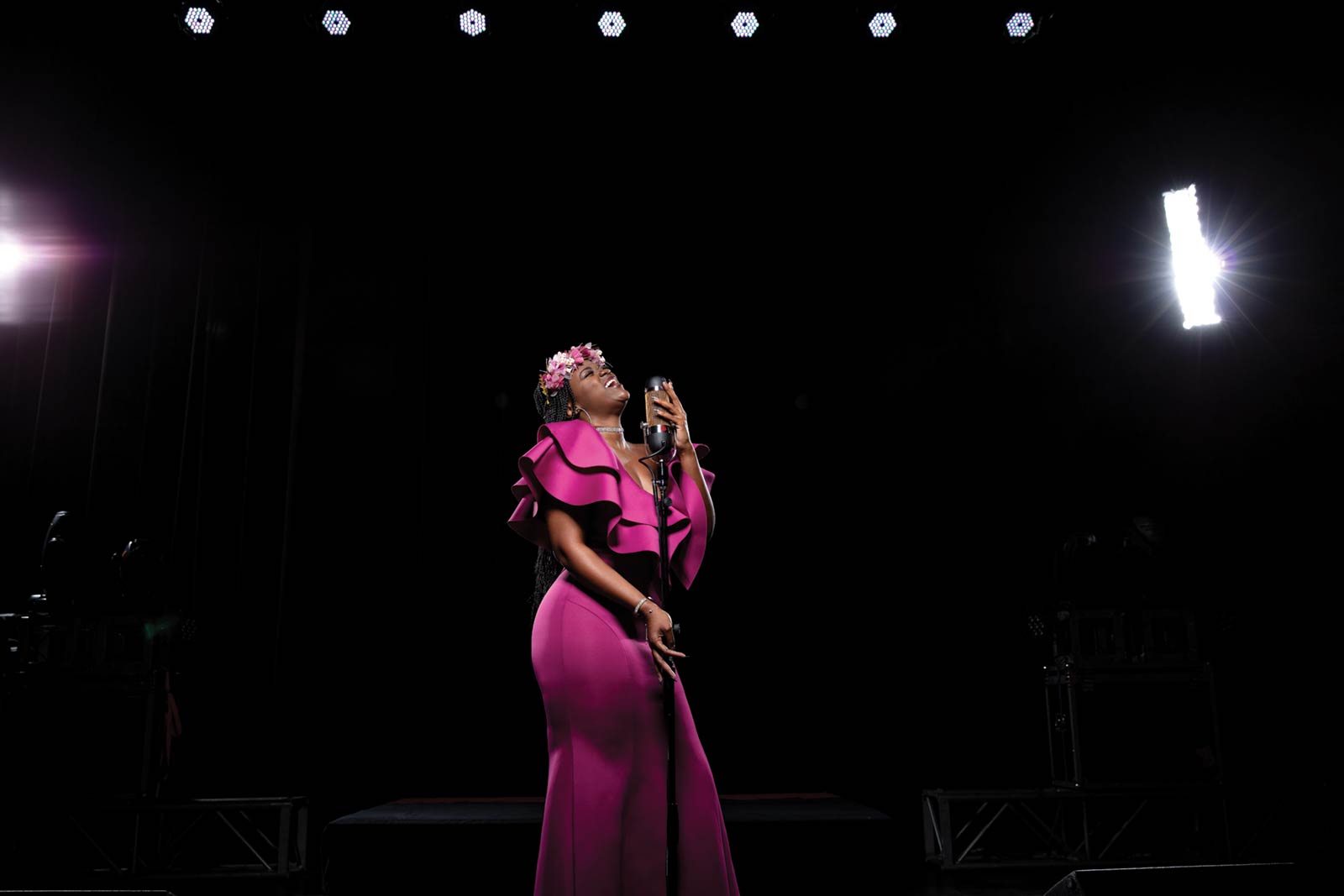 Columbia musicians forge ahead during the COVID-19 pandemic.

Columbia singer Symonne Sparks remembers her last concert she performed in before the COVID-19 pandemic effectively shut down most live music around the world.

As the vocalist for jazz ensemble Loose Loose, Symonne headlined a music showcase for the True/False Film Festival on March 7 at Cafe Berlin. The festival occurred on the cusp of the COVID outbreak in Missouri, and an air of tension permeated the weekend as organizers, attendees, and participants moved ahead with cautious apprehension.

For Symonne, this meant a more restrained performance and interaction with both fans and bandmates, behavior that’s now commonly known as “social distancing.”

“I remember saying, ‘Let’s just be cautious — let’s not hug and embrace like we’re used to,’” Symonne says of the sold-out True/False showcase. “Just to be able to come into a space and enjoy each other — it’s a gem to say that was the last one.”

Little did she know that the Cafe Berlin show would be the only chance she’d have to perform for months. Locally mandated lockdowns and safety measures closed most bars and small venues like Cafe Berlin, and many operations remain shuttered — or at least unfeasible — during the ongoing pandemic.

Without venues, artists had nowhere to perform during lockdown, which wiped out the prospect of touring and the income that comes with it. The Great Touring Blackout of 2020 has rocked the music industry to its core, from the major label world down to tight-knit local music communities like Columbia’s.

“We’re trying to do our best,” Symonne says. “A lot of people have been working [on music] out of their homes with studio setups. It’s been difficult, but we’re trying for the sake of music.”

Artists, venue owners, and record labels have had to improvise new ways to interact with fans, promote content, and generate revenue as live music gradually returns. Rose Music Hall, with its large outdoor park, has become a haven for groups like The Burney Sisters, especially as colder months loom. Symonne and others have embraced socially distanced live performances and online streaming content.

Still, the fact remains that a massive cavity exists in the Columbia music community without abundant live shows, forcing artists to adapt both their lifestyle and mentality toward making music.

When lockdown took effect in Columbia, local musicians, like many, were forced to ask themselves: “What do I do now?” As some of the most active performers around town, local duo The Burney Sisters faced this dilemma head-on by deciding to get to work.

Olivia and Emma Burney say they’ve actually seen a surge in new fans during the pandemic thanks to a multifaceted approach to fan interaction. The sisters constantly post on social media and engage their audience with digital content. They also live streamed shows from their basement every Saturday during quarantine.

“We got some good donations, and there were a lot of people showing up,” Emma says. “We had it set up so that people could get on a Zoom chat and cheer us on, and we could see them.”

Other Columbia artists like Rae Fitzgerald find performing to a camera somewhat impersonal. Though she hasn’t recorded a livestream, Rae did put together a series of video clips to promote her new EP, “Lonely Listener,” released on August 28.

Without the concerts or tours to promote new releases, many artists opted to delay or cancel impending album drops. However, Rae felt the need to move forward with the project.

“I had to keep on a steady roll, but it certainly wasn’t ideal because live performances are a good way to get new followers and sell more records and get new people excited,” Rae says. “It’s hard to promote yourself when you’re just doing it on the internet and not playing live. For me, ideally, the internet complements the live stuff, and now it’s in reverse.”

Symonne also hasn’t quite settled into the nature of virtual performances, mainly because her talents are amplified and augmented by the presence of a physical audience. This effect can’t be replicated over Zoom or TikTok. Instead, Symonne has had to change her performance mindset.

“I vibe off of energy,” Symonne says. “I read the energy that’s in the room. I see people’s smiles — to see what they’re feeling. It makes me feel better when I’m on stage. Singing out to an audience of none is difficult because I have to look out into the sky, into an empty room, straight into the camera, just hoping and trying to understand what’s behind it.”

In the months following lockdown, warm weather allowed some venues to host socially distanced outdoor concerts. Rose Music Hall’s Forrest Rose Park became a nightly sanctuary for roots and folk artists like The Burney Sisters, who began to regularly perform there this summer. The venue enacted mask requirements and social distance measures, with concertgoers encouraged to bring their own lawn chairs.

“They’re doing it the best that you can,” Olivia says of Rose’s safety protocols. “It’s great being able to listen to yourself through [stage] monitors and actually play a real show with a real audience.”

But what happens when it’s cold outside? The Burney Sisters suggest that indoor concerts could become more commonplace with proper mask wearing, social distancing, and capacity limits — similar to the rules The Blue Note has put in place. The sisters also played an indoor “listening room” show at Old Rock House in St. Louis in October. Even though, with audience members seated six feet apart, it wasn’t the cramped, sweaty rock ’n’ roll experience of yore, Olivia says it went smoothly and could be a template for other venues moving forward.

“That’s one of the only shows we played indoors, and that’s the safest we’ve seen for sure,” Olivia says. “They sanitized everything and have it all distanced. I think if venues are willing to put in the effort and the people are willing to obey the guidelines, then it could work.”

Meanwhile, Symonne and Loose Loose made their first live pandemic appearance at Ragtag Cinema’s 20th-anniversary drive-in event in August. The band performed to an audience who sat inside or next to their vehicles in a socially distanced environment. Symonne applauded the event organizers for the safety measures.

“I definitely felt safe, and the way that Ragtag had this setup was a phenomenally thought-out process on how to make people feel safe and special at the same time,” Symonne says.

The biggest challenge for the local music community is inherent in the name: A “community” implies multiple people interacting and sharing ideas. But in an era of social distancing, the pillars for this community — the bar, the venue, school, etc. — have been upheaved or drastically altered for safety.

For Symonne, that’s the iciest reality of the situation. She joined Loose Loose in 2017 and became entrenched in Columbia’s vibrant music culture, from performing at the burgeoning Columbia Experimental Music Festival to headlining showcases at True/False. To see that go away would be devastating, she says.

“You want to make sure that everybody is safe and comfortable — that we don’t ignore the active pandemic that’s happening right now,” Symonne says. “To respect that and move accordingly as an artist is part of our responsibility to humanity that we have, for the people that we want to interact with.

“But on the other side, as an artist and performer, I don’t blame anyone for wanting to say, ‘I still need to go out and do this’ and try to find the safest way possible for these moments to still happen. Especially in places like Columbia where [we have] that community of local artists and the audience that comes to see them — you don’t want that to die,” she adds.

For the musicians themselves, a theme of persistence runs through their words and actions, even if they’ve each had to act independently. Loose Loose returned for the Ragtag benefit; The Burney Sisters provide an optimistic example of live music moving forward; and Rae Fitzgerald bravely released new music during the pandemic.

Most importantly, they’ve all turned toward their art in a time when they needed it most. Soon enough, they can hopefully share it safely with audiences once again, in all of Columbia’s many venues.