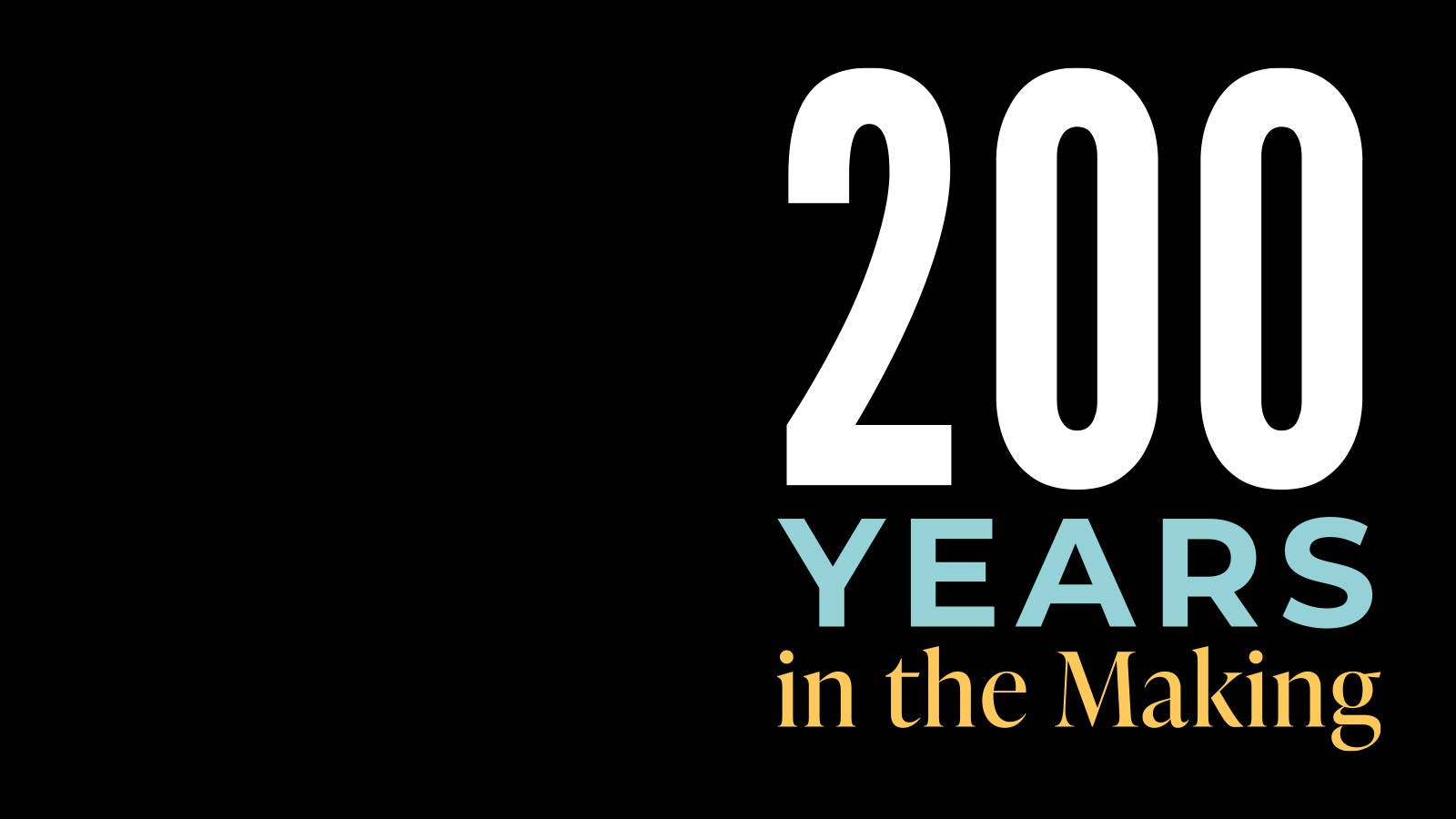 A look into the planning of Columbia’s big bicentennial celebration and the events to watch out for.

David Lineberry, the chair of the Mayor’s Task Force on Columbia’s Bicentennial Celebration Planning, sees a big advantage in planning for an event 200 years in the making: It can’t really sneak up on you.

“The beautiful thing about a bicentennial is you can see it coming,” David says. “We have been planning for it, we continue to plan for it, and we’ll be ready for it once it gets here.”

The big target on the task force calendar is June 12, 2021 — the proposed date of the big Columbia bicentennial event, set to involve a parade, town hall meetings, speeches, band performances, food, and other fun and festivities emanating from Flat Branch Park and spreading throughout downtown Columbia.

Until then, members of the bicentennial task force will be making up for time lost due to COVID-19 restrictions in meeting with community members, along with planning months of satellite programming all around the city to whet community appetite for the big bicentennial event in the months leading up to it.

That’s not to mention planning and executing a $3.2 million expansion of Flat Branch Park that will impact the city for years to come.

“Because of COVID-19 and all the uncertainty surrounding that, people’s thinking has been consumed in that area. On the other hand, when this comes up, there is a big hope value,” says Chris Kelly, CoMo 200 fundraising chair and former corporate relations advancement officer for the University of Missouri. “We love parks in Columbia. Adding to a park is something we’re accustomed to doing.”

All members of the task force efforts focus on three main themes: inclusion, celebration, and legacy. They want to make 2021 a hallmark year for Columbia.

“It’s the entire city’s bicentennial,” David says. “If you’re in Columbia or care about Columbia, this is for you.”

One of the earliest pieces of CoMo 200 programming was already set in motion this spring.

The You Don’t Say radio series on KBIA explores the Black experience in Columbia — past and present — by featuring conversations between members of the community.

You Don’t Say is just a starting point. The task force plans to use the conversations fostered through the radio series to conceive a suite of programming based on its content — including public panels, discussion groups, and response groups — that will be held around the city in the lead-up to the bicentennial celebration.

“We want the bicentennial of Columbia to really be about all of Columbia. That means all age groups, all types of folks, and the past, present, and future included,” David says. “We’re putting all of our effort into making sure all players are at the table.”

In working with the Boone County and Missouri state historical societies, the hope is that the dialogues and events conceived around the Columbia bicentennial will be valuable contributions to the history of the region.

“All of this written, oral, and our historical programming we’re still in the design phase of — all that will be captured and archived,” David says. “We’ll be creating a legacy with all of these conversations and projects.”

The members of the CoMo 200 task force saw the effect the COVID-19 pandemic had on the Boone County bicentennial this year. The hope is that by the time the 2021 rolls around, conditions will be as close to normal as possible.

And, by June 12, people will be eager for a reason to celebrate.

“This city is going to be ready to come together for a party,” David says. “I’m just thrilled that it’s going to be the CoMo 200 party.”

To build up anticipation for the June party, the CoMo 200 task force is planning a series of smaller lead-up events around the city, including performances, neighborhood celebrations, and collaborations with Columbia Parks and Recreation and Boone County.

CoMo 200 task force members who are also curriculum directors at Columbia Public Schools and MU are conceiving curricula surrounding the bicentennial celebration to encourage learning and engagement with CPS students. Part of that effort will involve a poster contest this fall, with 13 winners making up the art for the cover and the 12 months of a special 2021 bicentennial calendar.

“It will not only include that art, but the schedule of all our events and historical items of interest on various days of each month,” David says. “A lot of pieces are starting to move now so that, when 2021 hits, we can be hitting on all cylinders.”

Even with group meetings curtailed through the spring and summer, David says he is hearing a great deal of enthusiasm from Columbia residents about the bicentennial celebration.

In mid-July, following a task force presentation to the city council, David says he even got some unsolicited positive feedback walking down the street.

“I was literally stopped on the street by total strangers who had been in the chamber and heard me speak about what we were doing, who offered to join and participate,” David says. “I have yet to encounter a negative response. The moment I do, what I want to know is what we aren’t doing to pull those folks in. If we don’t have something that is for you already, tell me what you want, and let’s make it happen.”

The bicentennial is poised to leave a sizable, physical impact on the city: namely, a major, multi-phase reimagining and extension of Flat Branch Park.

Phase One will be demolition and revitalization of the creek bed. The task force expects this phase to be largely completed by the time of the bicentennial celebration in June.

“It’s not attractive, but it’s very important,” David says. “It’s a pretty high bill to take away concrete, gravel, plants, and trees that don’t belong, the remnants of old infrastructure that no longer supports anything, and return and restore that creek to a place where citizens can go and touch the water.”

Phase Two will be fundraising, design, and construction of a beautiful pedestrian bridge that connects the lower level of Flat Branch Park to Providence Road. Phase Three would be the construction of other flashy elements in the park, such as art installations, a scenic overlook, and a performance space.

The co-crown jewel of the project, though, is the proposed new Gateway Plaza on the southeast corner of Providence and Broadway. The plaza will feature a giant sign containing the letters “Columbia,” with a globe as the “O.”

Attributes about the city, submitted by residents, will adorn the globe.

“The arts, education, and so forth,” Chris says. “My word was ‘entrepreneurism.’ We have a great entrepreneurial community. It’s a gorgeous sign, a very striking project. By the bicentennial celebration, we’ll have some parts of that park underway. People will be able to see that we have something we’re leaving.”

The City of Columbia has already pitched about $1 million into the project by buying the necessary property and leveling it out. The Downtown Community Improvement District has pledged up to $1 million to the project as well, most of it going to the Gateway Plaza.

The task force is looking for help from the community to help raise the final $1 million to $1.2 million. Chris says the two co-chairs of the fundraising committee — former mayors Mary Anne McCollum and Bob Pugh — have shown tremendous enthusiasm for the project.

“We have a big job cut out for us in terms of raising the funds in a challenging time to help us fulfill the legacy part of that vision,” David says. “We have a phased plan for that, which will bring the people a cool, new, safe greenspace soon. Two years ago, we had dreams of pulling three or four sheets off of things at once in the park and then have the brass band kick it up. Since then, what we want to do is give the people everything we can.

“We’re going to keep visiting with those community groups we would have already been visiting with. If you’re interested in joining our efforts, reach out to us. If you have a group we can visit with virtually or in person, we do both. Reach out to us. We want to share the word and be as inclusive as possible.”

Events to Watch Our For

The radio series that started this spring on KBIA explores the Black experience in Columbia, past and present. The dialogues generated from this series will be used as a jumping-off point for bicentennial events such as public panels, discussion groups, and response groups.

This fall, Columbia Public Schools will feature a curriculum surrounding the city’s bicentennial. Part of that effort includes a poster contest for students, with artwork from 13 winners adorning a 2021 bicentennial calendar that will list important dates and historical items of interest.

In the first six months of 2021, the task force is planning a series of smaller events around the city. These include performances, neighborhood celebrations, and collaborations with Columbia Parks and Recreation and Boone County.

June 12, 2021, marks the date of the citywide bicentennial celebration. The event, emanating out from Flat Branch Park, will include such draws as a parade, town hall meetings, speeches, band performances, food, and other fun and festivities.

The task force is planning a $3.2 million expansion of Flat Branch Park to be completed in three phases. The finished project is set to include a revitalization of the creek bed, a pedestrian bridge that connects the lower level of Flat Branch Park to Providence Road, art installations, a scenic overlook, a performance space, and the new Gateway Plaza at the southeast corner of Providence and Broadway.