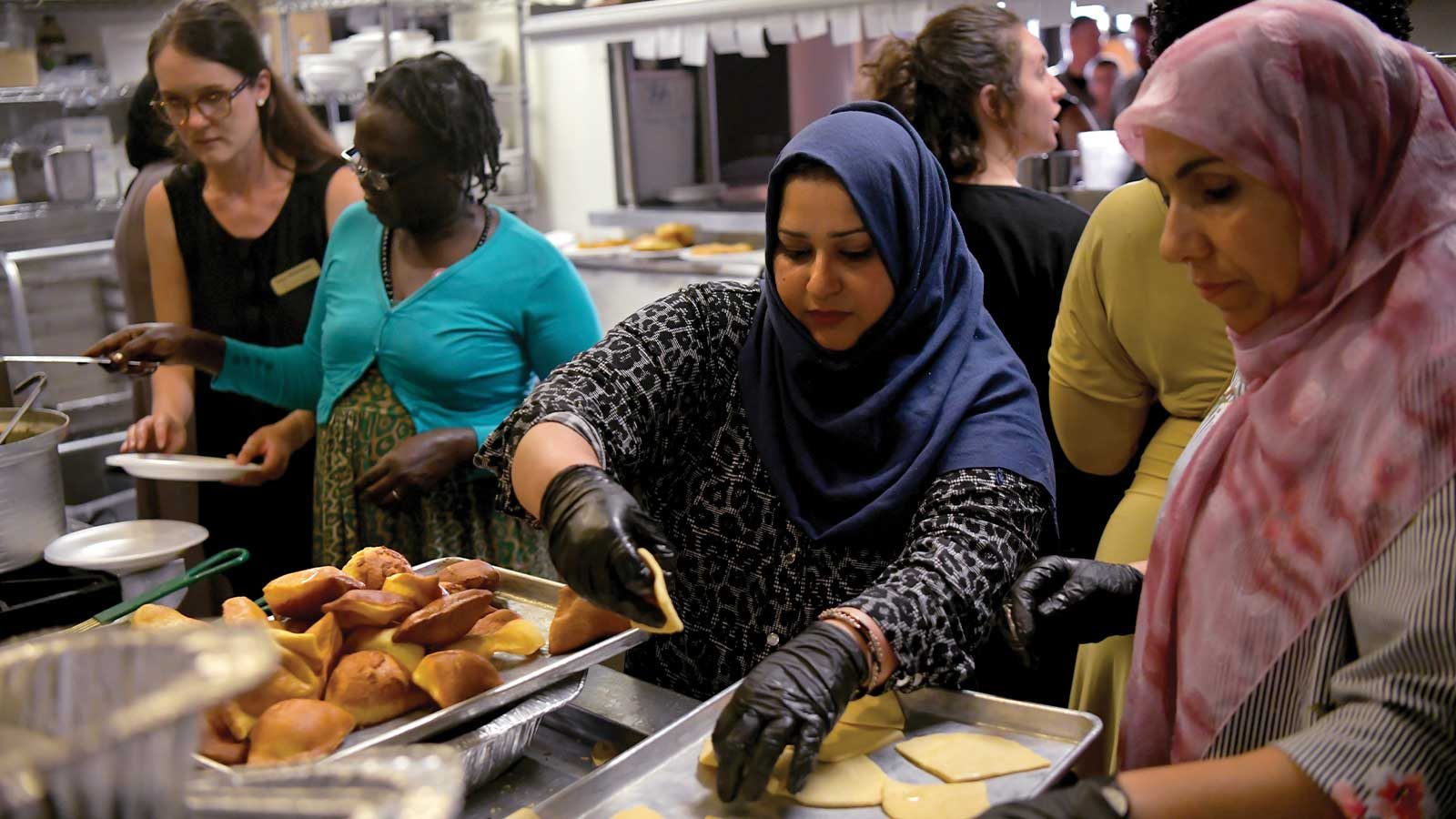 Columbia refugees share their stories and their fare at Café Berlin’s pop-up event.

We all have a food story. Each tale weaves a unique fabric of culture and of place, no matter if the narrative spans oceans or a single city block. These are the stories of us: our histories, our journeys, and our destinations. And somehow, our stories all include this Midwestern town we call COMO. Some of us were born here, some have chosen to make their home here, and some have arrived by chance.

That’s the case for many refugees who have been resettled in Columbia, most of whom had never even seen the Midwest on the map ahead of their arrival.

In late August, a group of refugees introduced their new home to foods from their homeland at the Multicultural Food Pop-up hosted by Refugee and Immigration Services at Café Berlin. A small set of women refugees staffed the kitchen, preparing a variety of traditional dishes.

On the hundreds of plates that left the kitchen, a collection of countries was represented: Eritrea, Saudi Arabia, Iraq, Somalia, Syria, and Sudan. From the time the doors opened at 5:30 until the moment the last mandazi, a sweet East African beignet, left the kitchen at 7 p.m., a line of customers weaved from the register, out the door, and to the sidewalk.

They were hungry — so much so that the kitchen sold out an hour earlier than planned. But they weren’t just craving food; they were eager to support this part of their community. The line was a mix of community members: some volunteers who help refugees with English tutoring or transportation and some who were curious about this new cuisine. All left with full bellies, a stronger connection to Columbia’s refugees, and a sense of philanthropy. Half of the proceeds earned went to the resettlement agency, and half was split among the stars of the show, the chefs themselves.

One encounter from that night at Café Berlin will stand out for me.

In Eritrea, coffee ceremonies are a daily ritual. Through turmoil and unrest in the country, this tradition has remained, carried across oceans by Eritreans looking for safety in a foreign land. It is not just the act of drinking coffee that’s important (as it is to many Americans who consume it only for its caffeine content). What’s vital is the sense of community shared over rounds of steaming hot brew.

Inside Café Berlin during the pop-up event, on the landing where the collection of misfit “honor system” coffee mugs live, two Eritrean refugee women rested on low stools, pouring coffee out of a jebena, a spouted ceramic jug used to brew coffee during traditional Eritrean and Ethiopian coffee ceremonies. At home, they would pour the coffee into tiny espresso size cups called finjal, but today, they’re quenching the thirst of a crowd — small plastic Dixie cups take their place.

Many patrons paid and took their cup to go, but as the evening wrapped up, the cooks came out of the kitchen to rest and chat about the busy evening. More chairs were pulled up, more coffee was poured. A basket of popcorn, a treat typically served during coffee ceremonies, was passed around the group. There was a mix of languages spoken here.

Next to me, Abdu, an Eritrean refugee who was resettled in Columbia years ago, told me that when he drives other Eritreans to appointments, they thank him by inviting him in for coffee. Sometimes he’s there for an hour or more, he says. It’s a display of gratitude, an act of community.

As we sipped our small cups of strong, spiced brew, Abdu told me about his journey to Columbia from Eritrea. He was forced to leave his family, carrying with him nothing but the clothes on his back. Today, he’s well settled into Columbia, and he now helps newly arrived refugees find the same peace and sense of community here.

By the second cup of coffee, we had talked about our shared love for travel, and by the third, we made plans to meet again after he returned home from visiting family overseas. By the end of the night, I felt energized. It’s certainly due to the three-plus cups of coffee I threw back, yes, but it’s more about a connective energy that arose from the sense of community and understanding I felt by sharing coffee with Abdu and his friends.

The stories of food transcended borders and broke language barriers. It also reminded me that wherever our destination may be, we can remember our journey through a taste of home.

Multicultural Pop-Up Menu
A diverse set of cooks came together to prepare the multicultural menu. At least six countries were represented on the plate. Refugee and Immigration Services hopes this is the first of many chances that refugees will have to share their fare.

Sambusa
Seasoned beef, chicken, or vegetables wrapped in a thin dough and fried. Popular across Africa and the Middle East. These were prepared by Iraqi, Somali, and Syrian cooks.