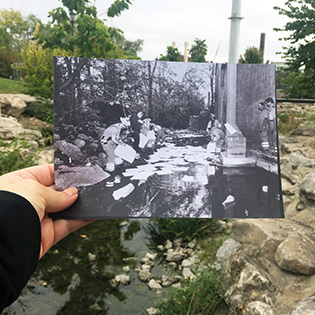 Watch Her Go: A New Chapter for Citizen Jane

Flat Branch Park, located at 101 South Fourth Street, has become a splash of nature in the midst of downtown Columbia and the MU campus. Intertwined with the MKT trail, the park is a favorite stop for biking enthusiasts, families, and students. But many don’t recall its formerly ruined state.

In 1820, the site where Flat Branch is now placed was established as the community’s market square. Historically, it was used for any community meetings or celebrations and was discovered to be an excellent location for vendors to display their wares for local shoppers.

The site would undergo its next transformation with the turn of the century, this time into a railway station- for the Missouri-Kansas-Texas, or MKT, railroad. In 1970, after the railway was abandoned, the city decided to convert it into what would become the MKT Trail.

Since the Flat Branch site was already along the trail, it only made sense that it would be renovated into a stop for walkers and bikers. The site, however, was showing the wear and decay from the seven decades that a railway station ran through it. An abandoned warehouse was still rotting on the premises, and littered trash interrupted the surrounding landscape. The Flat Branch renovation project began in 1997.

In 1998, the first groundbreaking was held after extensive measures had been taken to clean up the heavily polluted stream and soil contamination that was found under the warehouse. The park was dedicated in 2001, having come a long way from its previously deteriorated state. But this would only be the first step in the creation of the Flat Branch Park that we know today.

The second phase of construction was launched in response to positive community feedback on the newly refurbished lot. Project leaders decided that the next city block, which lies between Locust and Elm Street, would become an extension of the park. The 45-car parking lot that originally rested there was removed — only for workers to discover once again that the soil underneath was contaminated. In 2003, clean-up for the site began. It would be completed three years later, finally allowing construction for the park to continue.

The former train depot is now home to a sprayground and playground for kids, an art sculpture, amphitheater, and a gazebo, making it an ideal gathering place or picnic spot.