Hanging on the wall of City Manager Mike Matthes’ second-floor office is 12-point code of ethics. His favorite point is the third:

“Be dedicated to the highest ideals of honor and integrity in all public and personal relationships in order that the member may merit the respect and confidence of the elected officials, of other officials and employees and of the public.”

The code of ethics is that of the International City Managers Association, an organization Matthes considers “the gold standard” of good government organizations.

The ICMA has its code of ethics, an ethics hotline and its own form of sanctions against out-of-line members. The sanctions can range from a phone call from an ICMA representative to a life ban and full-page advertisement in the local paper explaining your sentence. Matthes provides a recent example: a city manager in California who convinced his city’s council to pay him an $850,000 salary.

“You’ll have a very hard time working in the field again if you’ve done that,” Matthes says.

“For public entities, it’s not about profits,” says Toni Messina, Columbia’s civic relations officer. “It’s about efficiency in doing what we said we’d do to serve the public.”

To measure that efficiency, the ICMA also puts together annual performance measurement reports in 19 service areas for 165 jurisdictions that provide benchmark data, comparisons and case studies. Since Matthes became city manager in 2011, the city has paid the $5,500 fee to participate in the survey, which Matthes says is vitally important to reaching the city’s goals of excellence.

Each March, various city departments have to submit their data to the ICMA. The submission process involves hundreds questions, according to Lelande Rehard, a two-year fellow working in Matthes’ office who has been in charge of data submission and distribution and is currently training the next fellow to manage these duties.

The city has participated in the survey twice, but Rehard looks forward to receiving the 2013 results this August. However, there are some common trends Rehard and others have already spotted. In a presentation to the City Council explaining ICMA’s Center for Performance Measurement, he notes that there is a lack of perception measures for internal services, certain service areas (particularly public safety, roads and IT) are underfunded, and the city performs its duties with fewer employees, particularly among the Police and Fire departments.

“Often, we’re setting the bar, so it’s tough to find places who are doing it better,” Rehard says. Columbia was the only city to be featured in two out of 24 case studies of excellence in the 2012 report: Leveraging the Landfill for Local Utility Procurement and Coordinating Housing Services and Targeting Neighborhood Improvements.

Columbia Sanitary Landfill became the first bioreactor landfill in Missouri in 2009 and one of only 10 in the United States. The case study commended the plant for supplying 1.5 percent of Columbia’s energy use — a number that is expected to increase to 2.5 within the next decade.

The second case study regarding housing commends the Columbia Office of Neighborhood Services’ use of outside capital. It reports that 77.6 percent of the program area’s funds came from outside capital, “the second-highest percentage among responding municipalities,” the report reads.

“Although the city was not able to meet recent goals in terms of total households assisted through the Homeownership Assistance Program, the city has still been able to leverage outside capital at a high rate,” the report reads. “Additionally, partnerships with local development organizations have leveraged nearly 60 percent of the funds needed for new affordable housing construction.”

Randy Cole, housing programs supervisor in the city’s Community Development Department, has found even more ways to incorporate the report into his department’s objectives.

“We have our own software where we track participants and people we serve in our program and our expenditures,” Cole says. “It mirrors a lot of reporting we already have to do for [U.S. Department of Housing and Urban Development].”

Although Cole says he only reviews the report once or twice a year, he says it “impacts what we do daily because knowing we measure performance and knowing performance is important affects your work and helps you move projects forward and get things done.”

The report, however, is not complimentary on all levels.

“We’re paying a lot [for solid waste disposal],” Rehard says. “Satisfaction is really high, but so is the cost.”

Matthes says that though the city looked into roll carts, a report recommendation that is shown to be more cost-effective and less likely to result in employee injuries, there wasn’t enough citizen support to even begin a pilot project.

“Sometimes people don’t want to see changes because our customer service is very high,” Matthes says. “Ultimately, our community gets to decide what we do. What’s efficient isn’t always effective.”

Rehard says its likely that changes will still need to be made to the solid waste division to see if it can reach a higher efficiency with comparable levels of customer satisfaction.

“For me, I’m more interested in how we do over time and how we perform to the citizens’ satisfaction than to how we stack up to other cities,” Rehard says.

There are difficulties in making comparisons. Rehard says there are certain obstacles or benefits we can’t control such as our climate, form of government or the state in which we live.

Another problem? Not all cities measure data in the same way. For example, Cole says because public service isn’t a part of his department, he can’t provide answers to their questions, even though those questions fall under his service area in the ICMA. He also says it’s vital to remain consistent in how you’re reporting the numbers.

“There are a lot of measures we don’t get because we don’t keep that data,” Rehard says. But he has also looked into what it would take to calculate those measures in the future. And, in fact, Columbia had higher response rates than the handful of cities selected for comparison in the adjacent sidebar.

The road to excellence

According to Messina, internal data and the citizen survey are more widely used in developing the strategic plan of the city. In the 24-page 2012 Strategic Plan, the ICMA is mentioned only once, as a performance measure to benchmark cost of service under the goal to ensure that there are resources to meet existing and future infrastructure demands. Rehard says benchmarking utility fees is an excellent use of the data.

Slightly more than half of the 2012 ICMA survey respondents reported having a strategic plan in place. Columbia’s strategic plan is, in a large part, due to the city’s Journey to Excellence initiative, in which the City Council wanted city staff to ultimately win the prestigious Baldrige Award, Messina says.

Locally, MidwayUSA received the award in 2009. As for the public sector, the City of Coral Springs, Fla., Messina says, was one of the first local governments to win a national quality award. A couple years ago, Columbia city leaders hosted a conference call with Coral Springs city leaders to ask how they got started on the road to excellence. The response? Fifteen years.

“We’re about five or six years into it,” Messina says. “We’re constantly setting, measuring, reassessing and looking at the bottom line [of our performance].”

And if Columbia hopes to win a national or state award, it needs a strategic plan. “If we want to have a strategic plan,” Rehard says, “we need to measure our performance.” 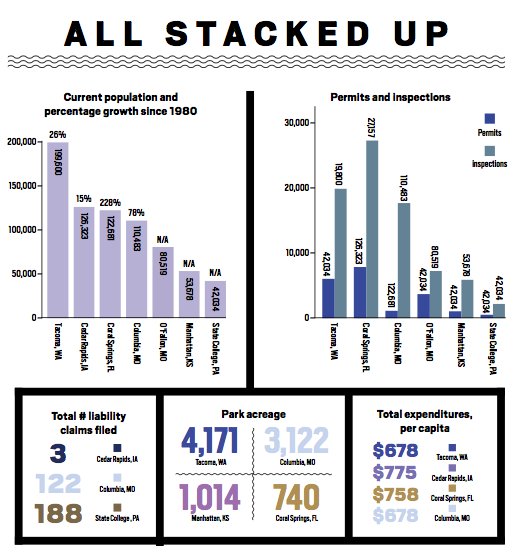 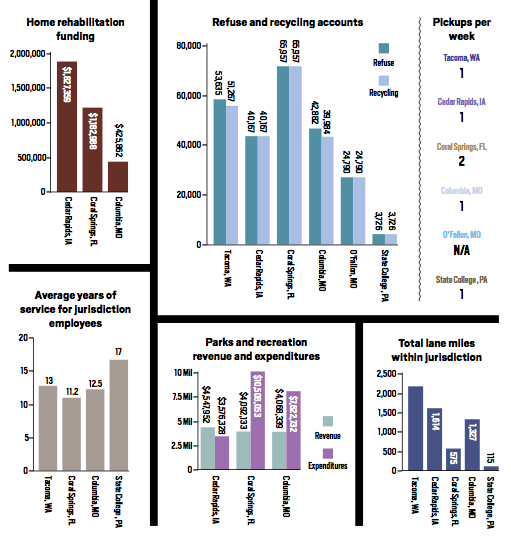