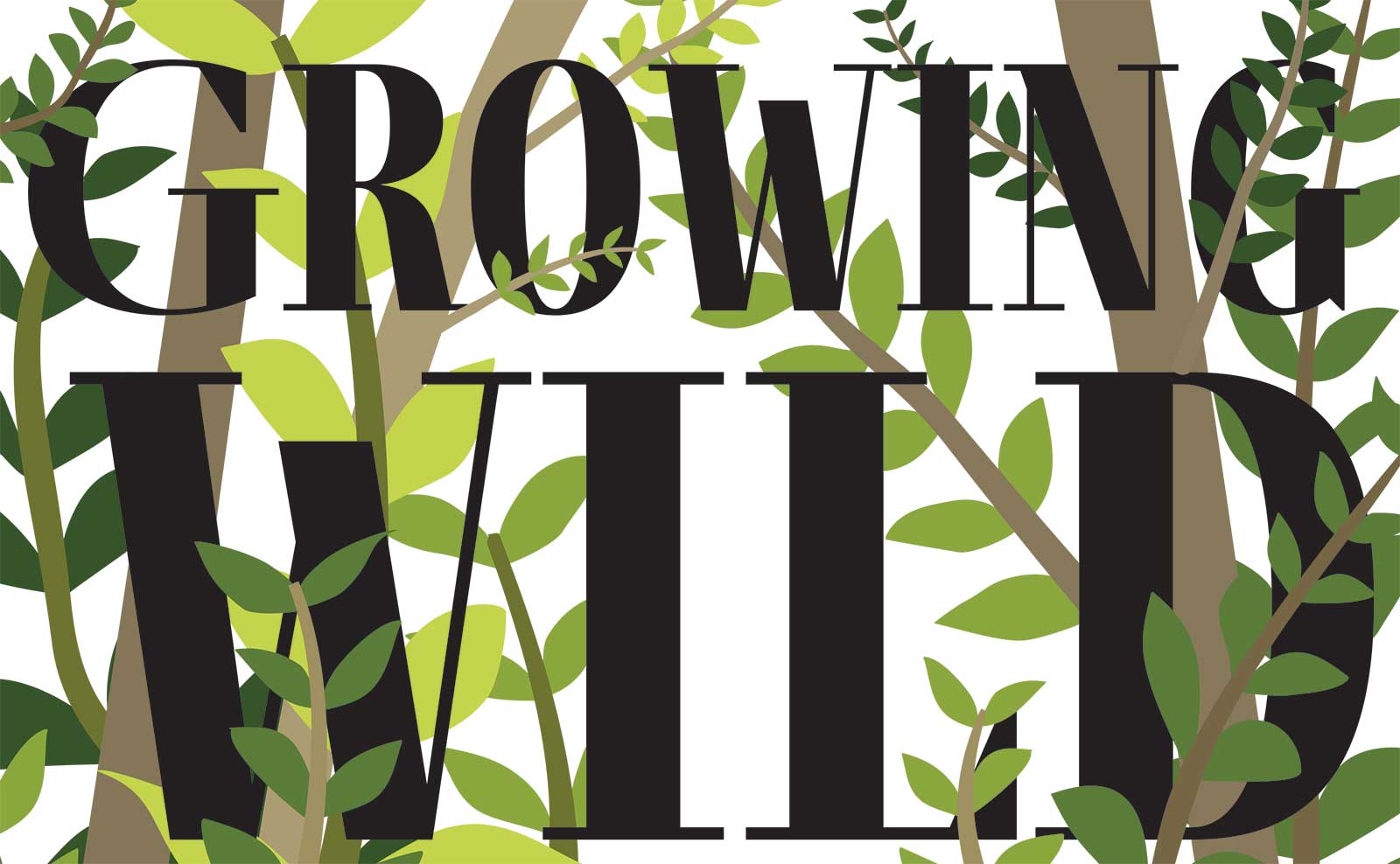 Turning Over a New Leaf

How to identify invasive plants and restore a natural habitat.

If you’re walking on the MKT Trail or taking a drive down Stadium early this spring, you may notice one plant with bright green leaves blooming before anything else in our woodlands and forests. It may seem attractive — a first sign of spring. But that plant is bush honeysuckle, an invasive plant species that is not originally from Missouri and is reducing our community’s biodiversity.

Once you can spot bush honeysuckle, it’s hard to not see it. Its red berries and bushy branches grow along parks, trails, and perhaps even in your own backyard, where many see it as a hedge to provide a border between yards and neighbors. Bush honeysuckle is one of about 25 common invasive plants in Missouri. The Bradford pear tree, well known for its fragrant, early white blooms and shiny green leaves, is another early bloomer that leafs out before other trees and is considered invasive.

Here are some basics you should know about the invasive plants in your own backyard and what you can do to help restore our natural habitat in Mid-Missouri.

So just what are invasive plants?

“An invasive plant is one that invades an area and overtakes the resources from other plants,” explains Danielle Fox, community conservationist for the City of Columbia’s Office of Sustainability. “Typically, invasive plants are exotic because they’re not from our localized area. They’re plants that we’ve brought from Asia or Africa, and they’re naturalized to our environment.”

Because these plants have no competition with other plants and no insects that recognize them as beneficial, they’re able to take over their surroundings. Bush honeysuckle, originally from Asia, became popular in the 1960s, when people found it attractive and began planting it in their yards as a hedgerow between houses. “When you bring an exotic plant into an area where it’s not originally from, it’s not ‘is it invasive?’ but ‘when will it be invasive?” Danielle points out.

Besides bush honeysuckle and the Bradford pear tree (which is also known as the Callery pear tree and originally from China), there are other invasive species currently present in Mid-Missouri, including burning bush, Chinese privet, and wintercreeper, among others.

What’s the harm in growing blooming Bradford pear trees in your yard or along the roads? Invasive plants like honeysuckle and the Bradford deplete resources and decrease biodiversity in an area. Bush honeysuckle, growing up to 20 feet in height, doesn’t allow other plants in the forest floor to grow, becoming so thick that native plants are almost completely eliminated.

Native Missouri plants, in contrast, have adapted to our climate, acclimating to our hot, dry Missouri summers and our cold winter weather. In turn, native plants grow massive root systems that allow storm water and carbon to reach down into the soil, for example.

“The greater biodiversity in an area, the more stable our ecosystem is,” Danielle says. “When an exotic comes in, it takes resources away from the plants that are native to our area.”

It’s a challenge for the city to take on these invasive plant species, a fight that requires both resources and staff time. “We don’t have the capacity to have a dedicated staff that is only managing our natural systems, so a lot of the time, it falls to our volunteers,” says Danielle.

The Columbia Public Works Department manages native vegetation, including the Roadside Pollinator Program that was launched in 2019. You may notice the signs along local roadways that designate a “Pollinator Habitat in Progress.” Converting the grassy areas along roadsides, roundabouts, and medians to native vegetation reduces maintenance costs and duties, since native plants don’t require mowing, and also leads to less runoff going into local creeks and streams.

As for all that honeysuckle growing along the trails, the city’s parks and recreation department manages the Adopt-A-Trail program, in which volunteers adopt a quarter-mile section of trail somewhere in the city. Volunteers remove bush honeysuckle along the city’s easement on both sides of the trail. Danielle points out that large sections of Grindstone Nature Area and Capen Park have been cleared of honeysuckle, thanks in large part to work by volunteers. It’s ideal to remove honeysuckle in spring, when it’s easy to spot by its early, green leafing; the Missouri Department of Conservation recommends controlling the spread by pulling seedlings, cutting, and using herbicide treatments.

In your own backyard, you can make a difference through the city’s CoMo Wild Yards Program, which helps landowners restore native plant habitats on their property. Homeowners can go online to set up a consultation with a community conservationist like Danielle, who will visit your yard to talk about native species and provide landscape advice. Danielle estimates she’s had 100 consultations in the past four years, all with the aim of giving people the basic knowledge to create a sustainable landscape.

The Wild Yards Program’s educational component is key, with homeowners who participate sharing information with others and becoming more personally invested in creating a successful native landscape. “Giving people the basic knowledge to get out there and start spreading the word has been our main goal,” Danielle says. “When I first meet with people, they may not know about native plants, and now, they’re educating other people about it.”

Students and Science Transform our Parks

Through real-life, hands-on projects, Mike Szydlowski, science coordinator for the Columbia Public Schools, educates students about invasive plants. Mike first became aware of bush honeysuckle about eight years ago after reading about it in a Missouri Department of Conservation publication. “It said as you drive, look at any green that’s in the forest this time of year — it’s honeysuckle,” he recounts. “It opened my eyes. When everything else is dormant, it just sticks out. It was a jungle along Fairview Park.”

Thinking about what he could do, Mike started with one class at Jefferson Middle School. During a field trip, students removed honeysuckle along Twin Lakes Park. “The kids loved it,” he says. “They could see an immediate effect, it was a great way to relieve stress, and they could see that it was for a good cause.”

That became the pilot. The removal program continued at other schools, like Fairview Elementary, Mary Paxton Keeley Elementary, and Smithton Middle School. To date, students have participated in 24,000 hours of removal, with just under 2 million plants cleared in the first three years. Fairview Park is about 75% cleared of honeysuckle, and Smithton Park is about 60% cleared. “We can’t eradicate honeysuckle, so the recommendation is to pick parks you want to save and restore,” Mike says.

It’s no surprise that Mike was awarded with the Invasive Plant Action Award from the Missouri Invasive Plant Task Force in recognition of his work with teachers and students to remove honeysuckle. It’s a project that has been transformative — not just for the parks and forests, but for student learning and their engagement with nature.

“Our generation grew up outside all the time, but a lot of these kids aren’t outside a lot,” Mike says. “They’re learning how to identify plants and enjoy being outside. It’s about the honeysuckle, but also about the community service and getting kids to realize this can be a lot of fun.”

This spring, as you’re enjoying Columbia’s trails, keep your eye out for honeysuckle. As you walk by Fairview Park, pay attention to the areas that have been cleared and where, thanks to removal efforts, other native species can now grow again for the first time in years. “It’s been 10 years since there have been wildflowers on the forest floor at Fairview,” Mike says. “That’s exciting.”

Hand Pulling
When the plant is small and the soil is moist, hand pulling is an option if the entire plant can be removed. This method should not be used in highly sensitive areas because it disturbs the soil and aids in the spread of other invasive species.

Cut-Stump Method
The cut-stump method involves cutting the bush off at the stump and applying a 20% glyphosate solution with a sprayer or brush to thoroughly cover the freshly cut area.

Foliar Spray
Foliar spray the leaves with a 2% solution of glyphosate and water plus a non-ionic surfactant, which improves the chemical’s ability to adhere to the plant. This method should be used in early spring or late fall before or after the leaves of native plants are present.

Basal-Bark Method
The basal-bark method consists of spraying a mixture of 25% triclopyr and 75% horticultural oil to the bush’s stems to a height of 12 to 15 inches from the ground. Thorough wetting is necessary for good control.

Fire
Fire assists in the control of honeysuckles if there is enough fuel and the area can be burned safely. Burn every spring or every other spring for several years to control resprouting.