Rapid growth, sprawl, cost recovery: The City of Columbia’s newly minted comprehensive plan responds to these and other resident concerns in its emphasis on development and redevelopment in established neighborhoods. The plan’s focus on a compact and contiguous community is clear, reflected in part by repeated calls for making livable and walkable neighborhoods a priority.

Yet despite that wary approach to expansion, Columbia is on the cusp of significant growth on both its northeast and western boundaries. City officials already have begun the northeastern expansion by annexing in late January more than 140 acres of city-owned parkland that houses the Lake of the Woods golf course and pool. Meanwhile, voters last November laid the groundwork for annexing properties west of town by approving a $32.3 million bond issue that includes money to build a city sewer line out to Joe Bechtold’s Midway property near the intersection of Interstate 70 and U.S. Highway 40. Municipal policy has long required that property owners who wish to connect to Columbia’s sewer system agree to become part of the city.

“What a Bechtold annexation agreement would do, I think, from a city planner’s perspective, is establish in essence the western-most boundary of a future City of Columbia municipal limit,” says Patrick Zenner, Columbia’s development services manager.

Columbia’s moves toward expansion have not been unheralded. Indeed, Columbia’s master plan specifically points to the ongoing expansion northeast of the city. And plans to provide sewer service to Midway commercial properties have been on the books since at least 2004, says Steven Sapp, public information specialist for Columbia Public Works. 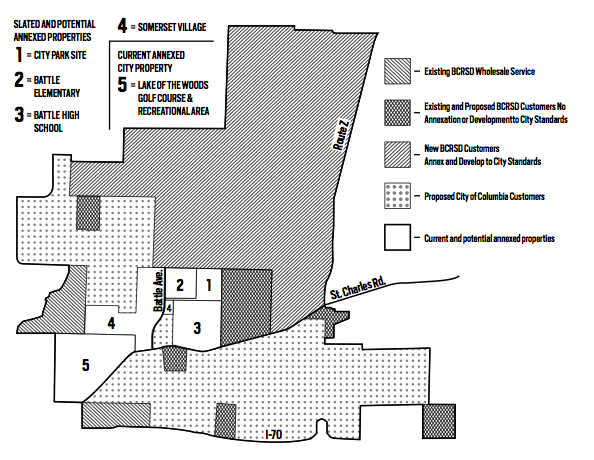 Although the city’s comprehensive plan, called Columbia Imagined, anticipates that the new Battle High School on St. Charles Road will stimulate additional development, expansion of Columbia’s borders actually only began last August with the modest annexation of a .22-acre site at the southeast corner of St. Charles Road and Demaret Drive. Small though the property addition was, it paved the way for future annexations by making Columbia’s border contiguous to the Lake of the Woods golf course. Columbia City Council members voted in January to bring the recreation area, which, though owned and operated by Columbia, could not annex until it was contiguous to the city, within the community’s corporate limits.

Other annexations are likely to follow. Somerset Village, a proposed 128-acre residential and commercial development that borders the golf course on its south side, is in the midst of revising its zoning application to prepare for annexation. Columbia already has a pre-annexation agreement with the Somerset Village property owners in place, Zenner says.

From there, city plans to bring Battle High School within its boundaries can move ahead. Connected to Columbia’s sewer system through a roughly $1.26 million project jointly funded by the city and the Boone County Regional Sewer District, the high school’s approximately 80-acre site will be adjacent to city borders once Somerset Village annexes.

“There is an annexation agreement with the school district,” Zenner says. “That is what was required as a prerequisite to being able to open the school this past fall.”

North of the Battle High School tract is a 25-acre city-owned parcel slated to hold a community park as well as about 40 acres on which the Columbia Public School District plans to build a new elementary school, expected to open in 2015. Both sites eventually will connect to the city’s sewer system via the line built for Battle High School, Zenner says, and will become part of Columbia.

Beyond the school and park sites are an estimated 1000 acres in unincorporated Boone County north of Battle High School and west of Route Z that city and county sewer officials believe may wind up within Columbia’s corporate limits. A cooperative sewer construction agreement between the two government entities — approved by the City Council in 2010 — foresees residents there receiving sewer service from the Boone County Regional Sewer District but annexing and developing the property to city standards. Officials say the land currently is largely zoned for agrarian use.

Another estimated 1,000-plus acres of unincorporated Boone County land south of St. Charles Road on both sides of Route Z is slated in the agreement to receive city sewer service. Indeed, the November sewer bond request included $1.14 million to finance a sewer line extension designed to serve that area, which sits just south of Battle High School. The project, called the North Grindstone Outfall Extension Phase III in city plans, would run a line from just south of Battle High School to Route Z.

Although Columbia might eventually annex some or all of these acres near Battle High School, Zenner emphasizes that no immediate plans exist to do so. The territorial agreement is an effort to plan ahead for the development that the new secondary and proposed elementary schools might prompt, to lay out and understand what might happen in the area depending on road improvements and developer proposals, he says.

“It will eventually be part of the city, but it is not something that we are interested in annexing today or even in the near future,” Zenner says. “It’s all dependent upon who develops that.”

Midway as an endpoint

Plans for expanding Columbia’s western border are more nebulous. At the center is a proposal to extend a city sewer line roughly one and a half miles from the existing line west of Columbia’s Bellwood Subdivision near Strawn Road and Broadway to the Midway Truck Stop. Design work on the project is scheduled to begin next year, so the line’s exact route has not yet been decided, Columbia Engineering Supervisor Steve Hunt says.

Still, the extension has been part of Columbia’s long-range planning for years, having been included in its 2004 sewer utility master plan, says Sapp, of the Columbia Public Works. Sapp says the plan came to the fore when Midway business owners informally asked last year that the line be built.

Joe Bechtold, owner of the roughly 200 acres on which Midway Truck Stop and its affiliated businesses stand, says he sought the sewer extension to pave the way for future growth on his property. Although Bechtold says he has no immediate plans to expand his Midway business ventures, connecting to the city’s sewer system allows for the possibility. Columbia can more efficiently treat the site’s wastewater than the onsite lagoon currently serving the property, Bechtold believes.

“We’re maxed out on what we can do with our lagoon,” Bechtold says. “We really can’t grow.”

The proposed sewer extension — dubbed the Henderson Branch Sewer line for the stream the line is to follow — will probably also be capable of serving Perche Creek Golf Course and Midway Arms, both of which also currently use small onsite wastewater treatment systems, Zenner says. He adds that those property owners ultimately will decide whether to hook up to the main trunk line Columbia will be building because the city cannot require it. The sewer line will not run far enough west initially, Sapp says, to replace the contractual wastewater treatment provider used by Columbia Public School District’s Midway Heights Elementary School at 8130 W. Highway 40.

City officials included the Henderson Branch line extension’s estimated $2.6 million price tag in the November sewer bond issue proposal, which won approval from nearly 80 percent of those who voted. Zenner expects the city will pick up the entire tab, but Boone County Regional Sewer District General Manager Thomas Ratermann says that remains to be seen. Columbia and the sewer district will work that out while negotiating a state-required connection agreement to determine how affected residents and businesses will be served, Ratermann says.

Ultimately, the Midway sewer line will extend Columbia’s western border, though it’s unclear exactly when or by how much. It’s an expansion unforeseen by the Columbia Imagined comprehensive plan, which urges growth within areas already served by city utilities. And it’s an expansion that will stretch Columbia’s western border as far west as it is likely to go, in Zenner’s eyes. He says he believes the city’s infrastructure — its police, fire, sewer service and road maintenance capacities — may well be stretched to capacity by a Midway extension that would create “a western extreme for the City of Columbia.”

Still, Zenner says Columbia’s plan will adapt to recognize the city’s westward expansion, and he points to the benefits the city will receive by building the new sewer line and annexing the Midway property. Columbia will eliminate potential environmental problems by extending sewer service to the area while creating the opportunity for new tax revenues, officials say.

Columbia has been working for years to reduce the number of lagoons and other small onsite wastewater treatment plants in the area with city sewer service. Building the Midway sewer line could eliminate discharge from numerous small wastewater facilities that currently flows into Henderson Branch stream and from there to Perche Creek, which runs through the western portion of Columbia, Columbia Sewer Utility Manager David Sorrell says.

“So by eliminating those discharges, you have a cleaner stream,” Sorrell says. “Hopefully they’re meeting their permit requirements, but it’s still not the same as just regular rainwater.”

Zenner considers the environmental benefit Columbia’s “ultimate goal” of the Midway sewer extension. Lagoons over a period of time will fail, creating the potential for far greater environmental impacts than those created by municipally treated sewer discharges, he says.

Columbia stands to receive financial benefits from the project as well. The city would receive connection fees from those who sign on for the municipal sewer service and regular user fees once they’re customers. But a more substantial benefit likely would come from sales and property taxes Columbia would collect once the new Midway sewer customers annex to the city.

“It has the potential to bring on some very large sales tax-producing businesses that could be valuable to the city in the long term,” Zenner says.

That expansion in Columbia’s tax base might not be matched by a residential expansion on the city’s west side. The nature of the land between Columbia and Midway, which includes floodplain and other topographical features that make it difficult to develop, prompts Zenner to predict that development on the west side of town will be relatively light even after city sewer service is available.
“Because we’ve got too much land area that’s probably prime that’s already near the amenities that most people want — schools, convenience commercial, roads and everything else — that just provides you a much more efficient way of getting around and getting your daily needs,” he says. “This particular area is really rural and probably going to remain that way.”