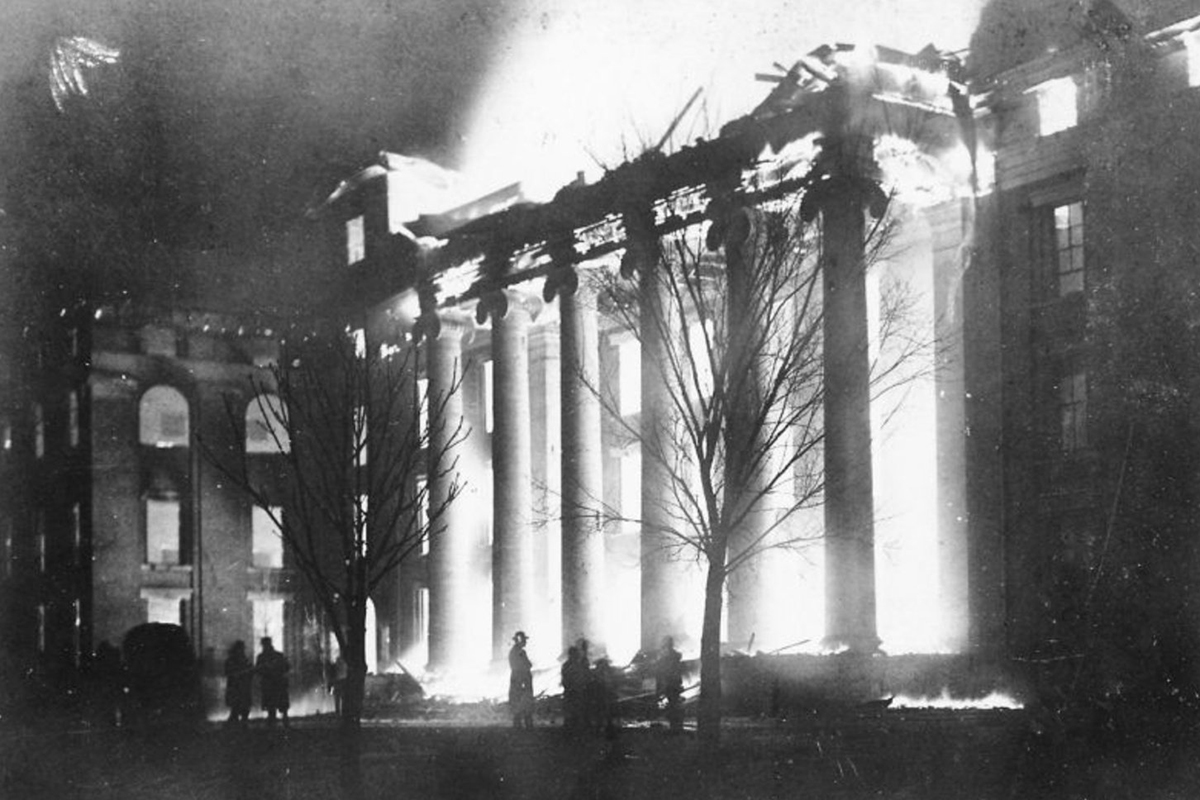 If you’re searching Wikipedia for historical details about Columbia, Boone County, the University of Missouri, and the state of Missouri in general, you’ve probably read something penned by Matt Fetterly.

Wikipedia? Don’t roll your eyes yet. Though skeptical editors, reporters, academics, and researchers are weary of the Wiki world, consider that in the last 18 years, Matt has written about 180 Wikipedia articles and—let this sink in—he’s made about 25,000 edits, mostly about Columbia and University of Missouri history. He does that work under a pseudonym.

Now he’s added another massive undertaking—under his own name—as lead researcher and author of COMO 365, a daily feature he produces for the COMO Preservation website, comopreservation.com. That group formed in late spring 2022 in response to a series of demolitions that leveled several historic buildings on the University of Missouri campus.

The COMO 365 feature is a daily entry with details about historic happenings and buildings in Columbia. The feature began appearing Jan. 25 at comomagazine.com. Matt’s January 7 post on COMO Preservation’s website—which launched at the end of December—had 1,000 unique views.

“That’s pretty amazing for a website that’s less than a week old,” he says.

But what gives Matt the credibility to check others’ credibility? He’s happy to come to his own defense. His personal library is brimming with local historical books and references that rival the collections at Columbia Public Library, the State Historical Society of Missouri, and the Ellis Library at the University of Missouri. His connection to local history is also genealogical.

He’s an eighth generation Boone Countian. His family has been in Columbia since the 1810s and 1820s.

“And, actually, my great-great-great-great-great-grandfather, Absalom Hicks, was one of the five men who chose the site for Columbia—met at Smithton” (Columbia’s first name), he says, and “took out the first advertisement to build the original courthouse where the columns are next to the courthouse today.”

Though his family’s history “goes way back,” Matt didn’t get all that interested in those connections when he was growing up. “I didn’t really latch onto them until I was about 18 or 19,” he says, noting that his days at Hickman High School sparked interest in historic buildings. That fed his growing urge (obsession?) to collect every book he could find about Columbia history.

Matt’s passion for history and historical accounts has also fueled his meticulous fact-checking to be sure accounts are accurate; not just the chronology he pens, but the source material it is based on.

“A big part of the fact-checking challenge is that sources considered authoritative might have depended on previous sources that were considered reliable and accurate,” he explains. “Repeating a historical fact or account will perpetuate inaccurate details unless there is other source material to compare.” The challenge is even greater for older sources, because there’s less chance of finding corroborative documentation.

Matt isn’t bothered that his published and corrected accounts have ended up—without citation—in MU marketing material, USA Today, Columbia city marketing brochures, and elsewhere. Some of those entities have benefitted from Matt’s double- and triple-checking historical records. For instance, the city published a piece that said the first classes at MU were held in 1839.

Not so fast, Matt said. It was actually 1840. He sent a correction. And recently, he found an error in a caption under a photo displayed at Columbia Public Library. He notified the library and staff made the correction.

“It started because I noticed there were errors or omissions” (on Wikipedia entries) “and there was just an edit tab up there, and I could hit it, and so I started making the changes,” he explains.

Matt isn’t just an ultra-history buff. He’s was the distribution manager for Shakespeare’s Frozen Pizza for about six years and still does some work for the brand. (Did you know … Shakespeare’s has a four-state distribution area—Nebraska, Kansas, Illinois, and Missouri, with some 150 grocery stores—and there’s a lot of business with school fundraisers.)

He’s also a professional percussionist, with performances at the Arrow Rock Lyceum Theater, the Missouri Theatre, Mizzou, Stephens College, and sundry other locations throughout Columbia and mid-Missouri.

His interest was piqued when he heard about COMO Preservation. He attended a meeting and began talking to the group’s co-founded, Dianna Borsi O’Brien, and the concept of COMO 365 came up. Matt jumped at the idea in mid-December and his daily entries began on Jan. 1, 2023. He foresees a book coming out of the project, at some point. COMO Magazine, meanwhile, encourages the public to submit ideas and entries for the daily chronology, though Matt will retain the rights for his material.

To contact Matt with corrections (he welcomes the scrutiny) or ideas, email him at [email protected]. To submit ideas or additions to the daily history recap, contact COMO Magazine Digital Editor Jodie Jackson Jr. at [email protected]. Matt has already had good feedback that led to adding text to some of the entries but, so far, no one has notified him of needed corrections.

From brainstorm to ambitious project.

The initial concept of a “day in Columbia history” chronology envisioned a sentence or two, or maybe a couple of paragraphs, with a snippet of historical dates and facts. But Matt has written feature-length, comprehensive accounts and often has old newspaper or other archival accounts to accompany his summaries.

He grins—almost oppressively?—when asked if his process is sustainable for all 365 days of 2023.

“As long as I think four-dimensionally, there will be 365 posts,” he says. “To find 365 buildings that have 365 associated stories on a different day of the year, all year long is a real personal challenge.”

Why should the rest of us share his interest in history? Matt has a quick answer.

“I think the only possible way to control our future is to understand the trajectory we’re on, which necessitates understanding the history that’s led us to this place,” he says.

Matt, now 35, guesses that the majority of people now living in Columbia were not born in Columbia.

“My goal is to raise awareness of history in a town that has very little awareness of its own history due to our transient nature,” he adds. “There are twice as many people in this town than when I was born in the 80s.”

Tales of history: Bitter and sweet.

The historical accounts are sometimes light-hearted and often uncomfortable. The “gay purge” of faculty and students at the University of Missouri in 1949 left lasting wounds. The great fire that leveled Academic Hall in 1892 stands as one of the most catastrophic events in Columbia’s history. On a somewhat lighter note—though perhaps not considered so at the time—the entire MU football team was arrested in the 1890s, “and they were let off by the mayor and the prosecutor because, um, they’re the football team,” Matt says.

Matt is banking on COMO Preservation to bring attention to history that won’t be forgotten—or sent to the landfill.

“I just hope that in the future, if we’ve raised consciousness about the history of this town, when an institution or a developer wants to demolish something that’s important to our cultural fabric, our cultural history, that people,” he says, “if they can’t save the building, will at least salvage” the valuable historic architectural features.

COMO 365 is written by Matt Fetterly for comopreservation.org. The mission of COMO Preservation is to preserve the historic architecture of Columbia, Missouri. You may contact Matt at [email protected]