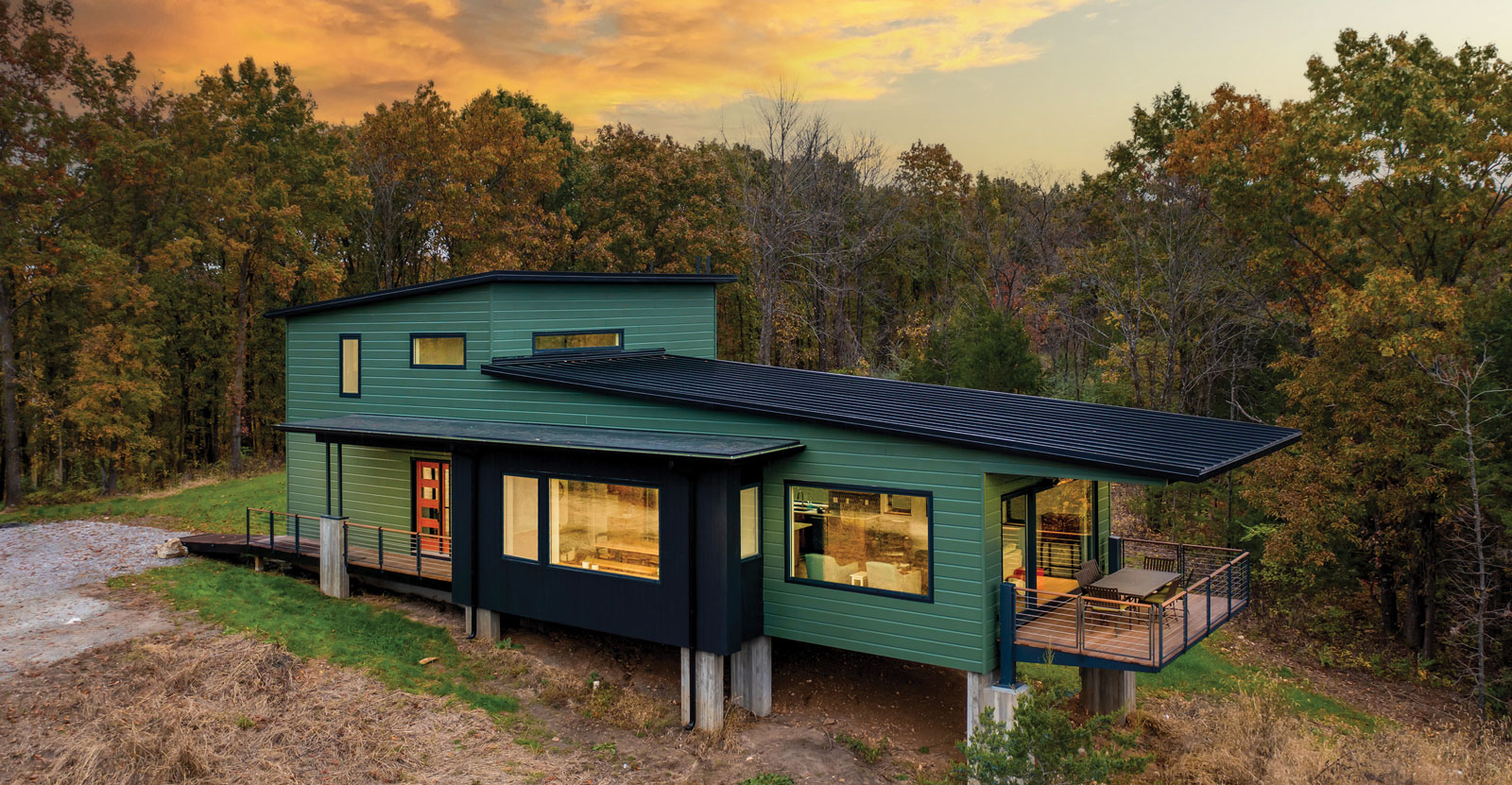 Jake Bruton builds to help save the planet and save homeowners money.

“Our construction methods don’t add much to the cost of the build – maybe 5-10%,” Jake Bruton, president and chief builder at Aarow Building, said. He added owners of his builds are realizing a savings of half on utilities.

This is achieved through a building approach that values “durability, energy efficiency, and architectural significance. If we combine these three things, and we make it so people want to live in the home, are comfortable in it, and they want to preserve it because of its beauty, we’ve done the best possible thing we can for the world,” Jake says. “And not waste building materials on something that’s going to have to be replaced in 45 years.”

Jake is a Columbia native and owns Aarow with his wife, Rebecca. Owning a construction company was not originally in his life plans.

“I am the second-generation owner, and this is our 39th year in business,” Bruton said. “I bought the company from my parents in 2007. Prior to that, I had worked for them a lot growing up, went to school at MU and got a degree in fine art and made a living as an artist for a while, and then my parents convinced me to come back to work for one job, and they said, ‘By the way, when this job is over, we’re retiring and we’re going to sell the business to someone who works for us.’ Well, I was the only employee, so I got suckered into buying the business.”

Jake dove into the business, but he had a learning curve. He says he spent the first five years just learning how to run a business. In 2013, he began researching construction litigation.

“I was […] trying to figure out why other builders got sued and what I might be doing wrong that would cause me to get sued. I realized that to build a house to code, you’re really doing the absolute minimum that you can do for quality, health, and comfort, and most builders were getting sued because of water,” Bruton said. “Water gets in through windows, roof leaks, poor design causes water to come in, and I decided immediately that we were going to build much more durable homes and that was going to be one of our focuses, because we wanted to walk away from [a build] knowing that it wasn’t going to have problems. We didn’t want anybody to be able to point to one of our homes and say ‘You did that wrong’. You can build a high-performance house that will be more durable, healthier, and more energy efficient, and in the end, way more comfortable.”

Jake is too busy nowadays to strap on his toolbelt. He co-hosts the “Unbuild It” podcast with an architect and a professor of building science at Yale, he creates weekly videos for a website teaching people how to run a construction business, consults with manufacturers, and does a lot of public speaking. The professional development of his staff also is a priority; he has five employees and loads of subcontractors.

“My team is amazing. If I didn’t have them, I couldn’t do this. The crew we have right now is amazing, and so are our subcontractors. I have a goal that everyone I work with to be as good as they can be,” Jake says. It’s not uncommon for his employees to grow enough to go out on their own as subcontractors. So, he’s constantly losing staff but simultaneously gaining subcontractors.

Aarow Building looks at ways it can make the “control layers” of the home more efficient. Control layers include air flow and mechanicals.

“We start with control of air flow in the home. Air leakage is the first way you lose efficiency. By creating a very well air-sealed home, we maintain the air we’ve invested in with heating and cooling,” Jake says.

One way he controls air flow is by using only triple-glazed windows from Europe. They have more than twice the “R value” of American-made windows. Wikipedia defines R value as “a measure of how well a two-dimensional barrier, such as a layer of insulation, a window or a complete wall or ceiling, resists the conductive flow of heat.” The higher the R value, the more energy efficient it is. American-made windows average an R value of four, while European windows have an R value of 10.

“Next, [we consider] the mechanical design and energy efficient appliances. Windows, insulation, air sealing, and mechanicals are one line item on the budget,” Jake explains. We can spend a lot less money on mechanicals (HVAC) if you let us spend more money on the other three, because a well-sealed home is less likely to need high-capacity mechanicals.”

Jake points to his home as an example. He built the 4,300-square-foot residence as he does his other builds. He said the HVAC system cost was about half of what the cost would have been for a code-built house of the same size. He realizes about $150 per month in savings on his electric bill.

“The average home in the U.S. is 2,260 square feet; the average energy usage for that house is about the same as what our house uses, and our house is twice the size. Our homes use half the electricity — I could put more into my mortgage if I know I’m saving $200 per month on electricity.”

You won’t find a lot of concrete in Aarow’s builds due to how much its production contributes to global warming. They also don’t use a lot of spray insulation for the same reason.

Aarow typically builds all-electric homes. Jake expects electricity to cost the same or be cheaper in the long run, while he expects natural gas to stay the same or increase. He says there’s no argument for natural gas unless you just have to have a gas fireplace.

Jake uses an architect based out of Boston, Steve Bazcek, for many of his home designs. “He is probably the best energy efficiency architect in America, and he’s reasonably priced,” says Jake. “The majority of the time, we’re contracted before the design process begins. The energy efficiency aspect is too complex to retrofit to existing plans. It needs to be integrated rather than applied.”

Aarow has built fewer than 25 homes since 1995, and they’ve built just 10 in Columbia since Jake bought the company in 2007.

Aarow brings in earnings from renovations and additions, but the focus has moved over the last few years to new builds as much as possible. Aarow also has an office in Kansas City, where all of the builds will be new.

“We don’t have a grand design for the future beyond wanting to continue to do right by the planet and by our customers.”