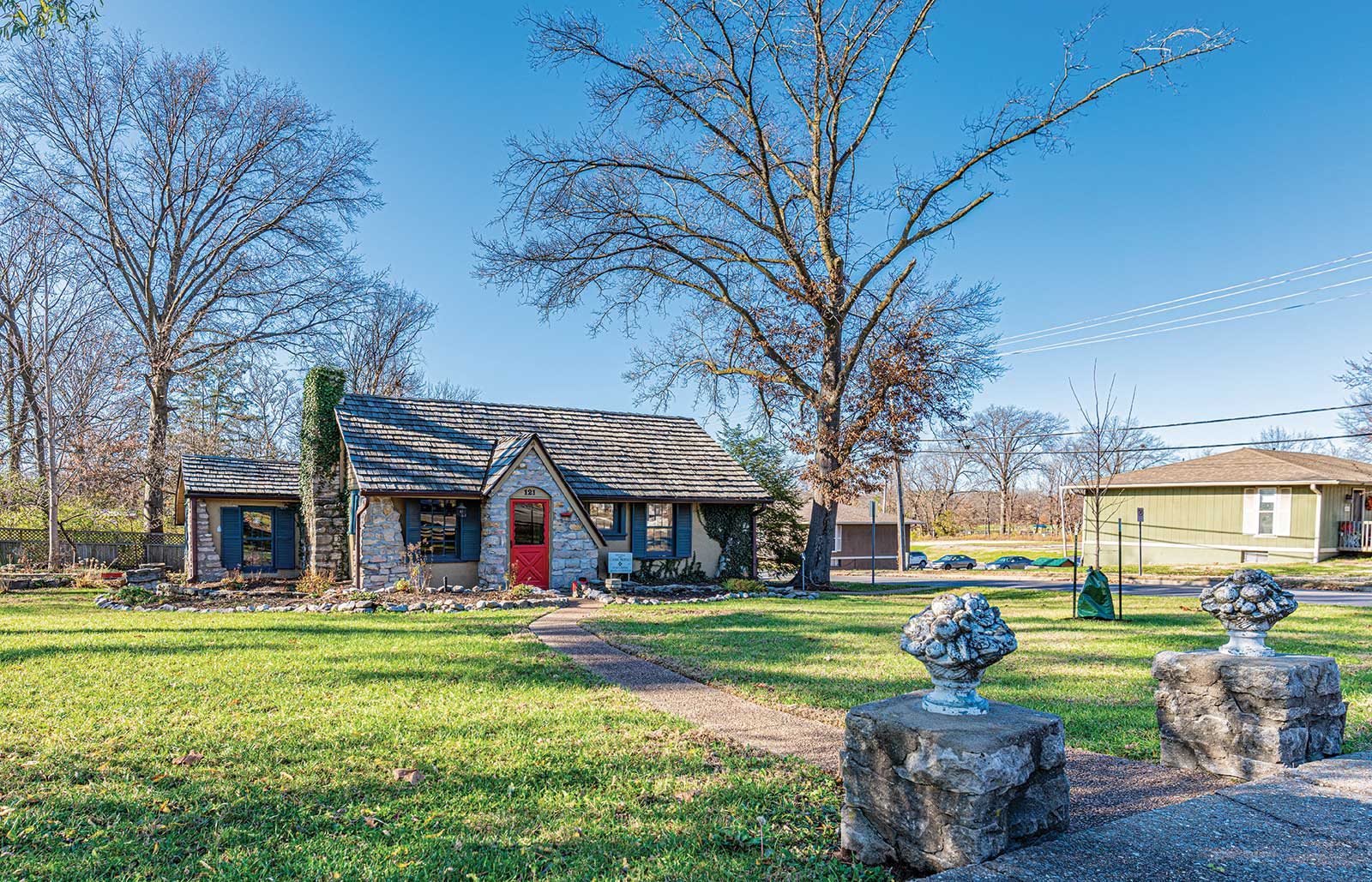 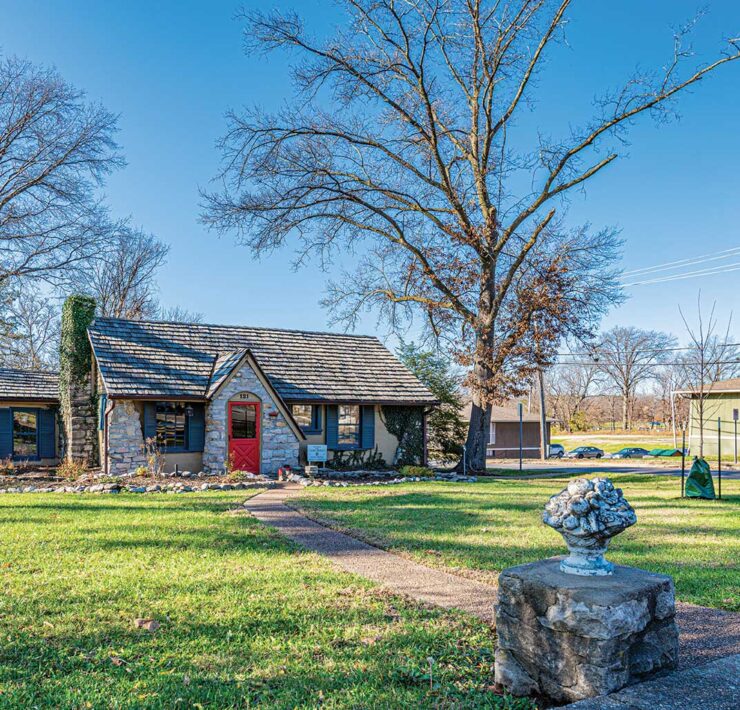 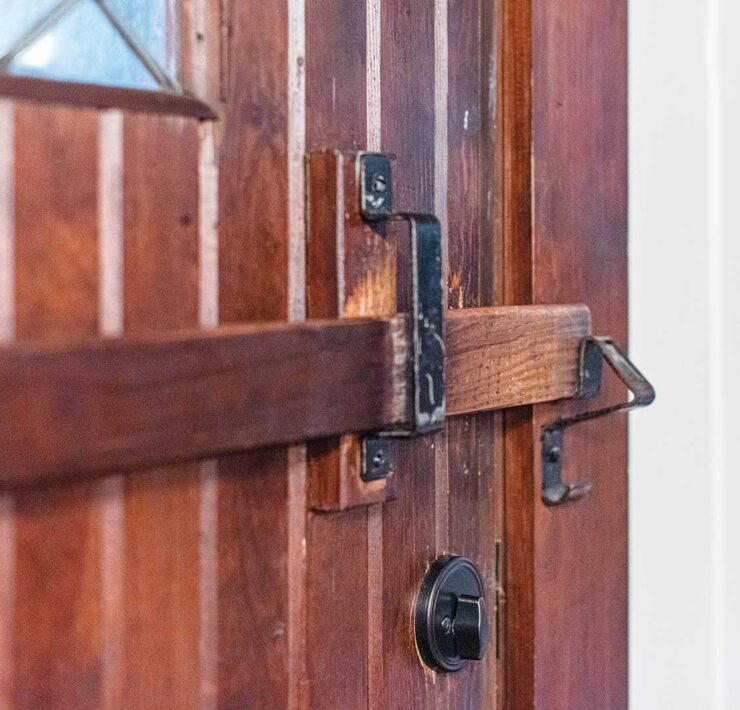 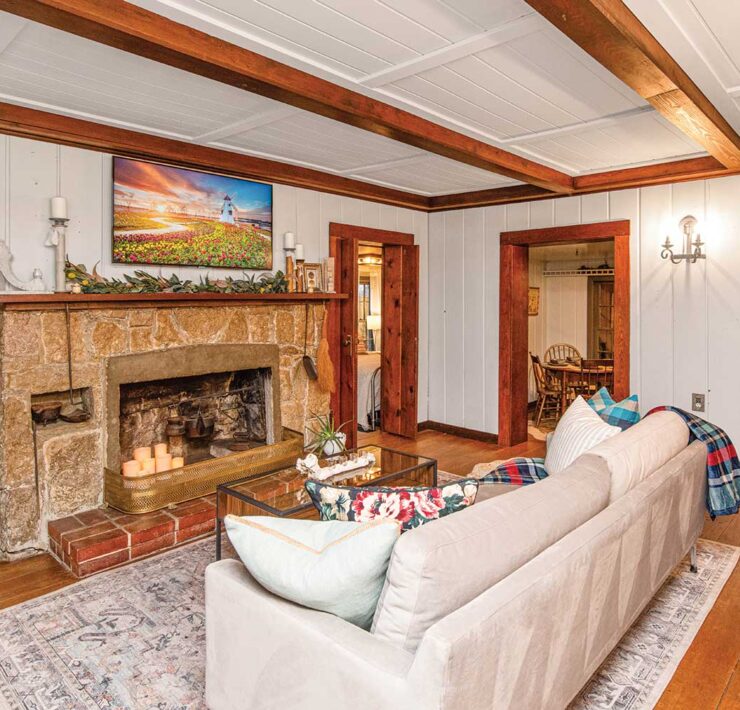 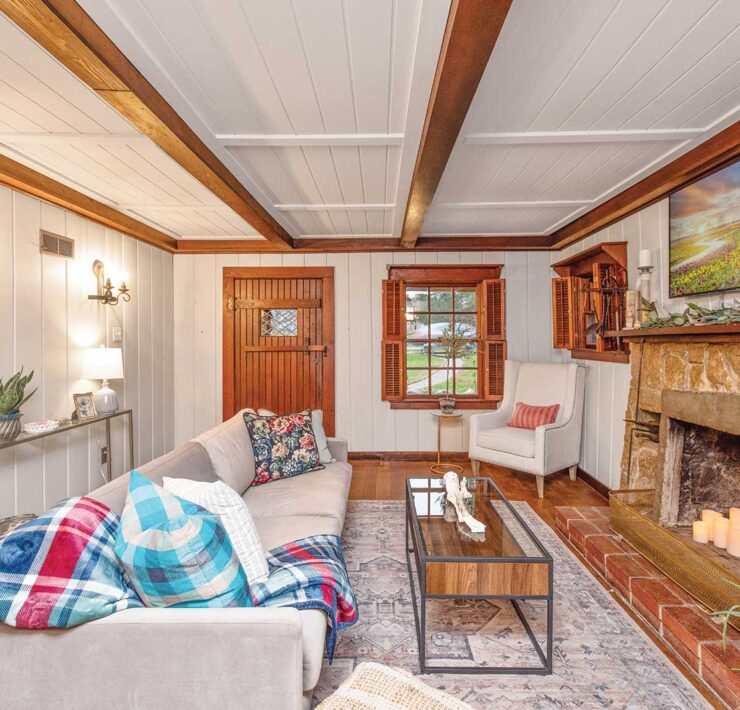 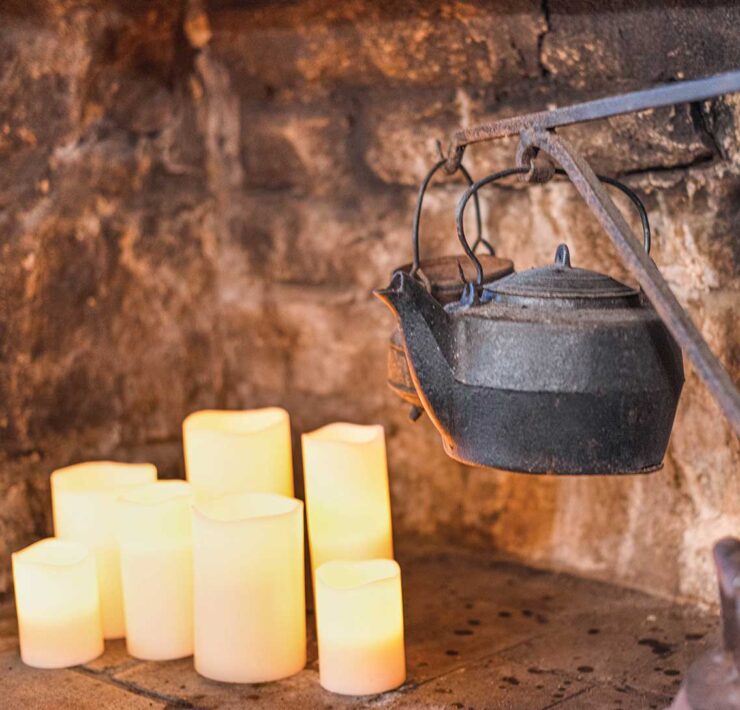 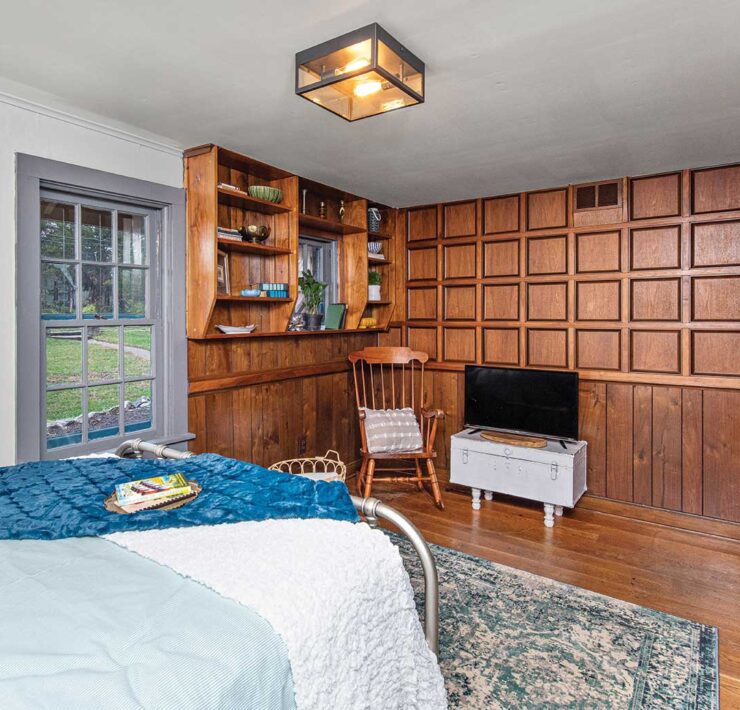 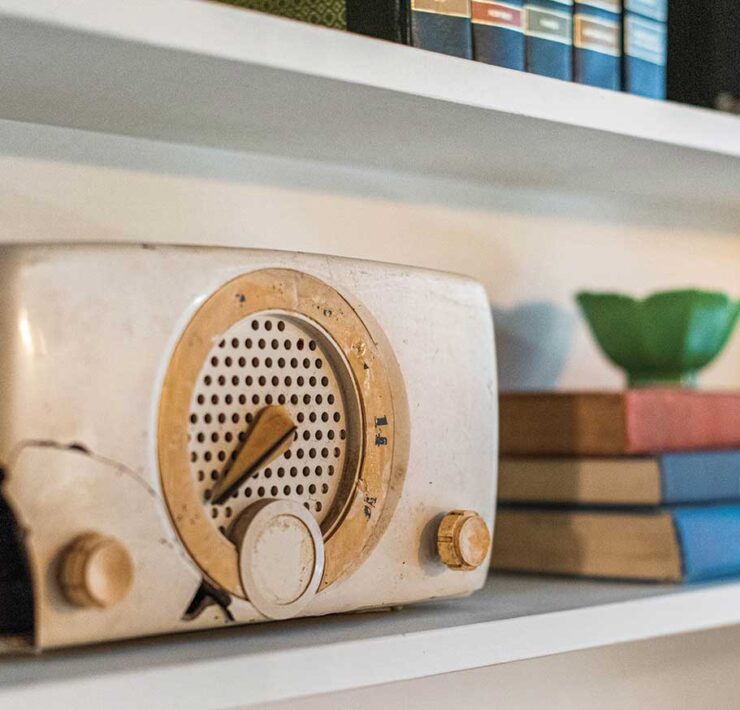 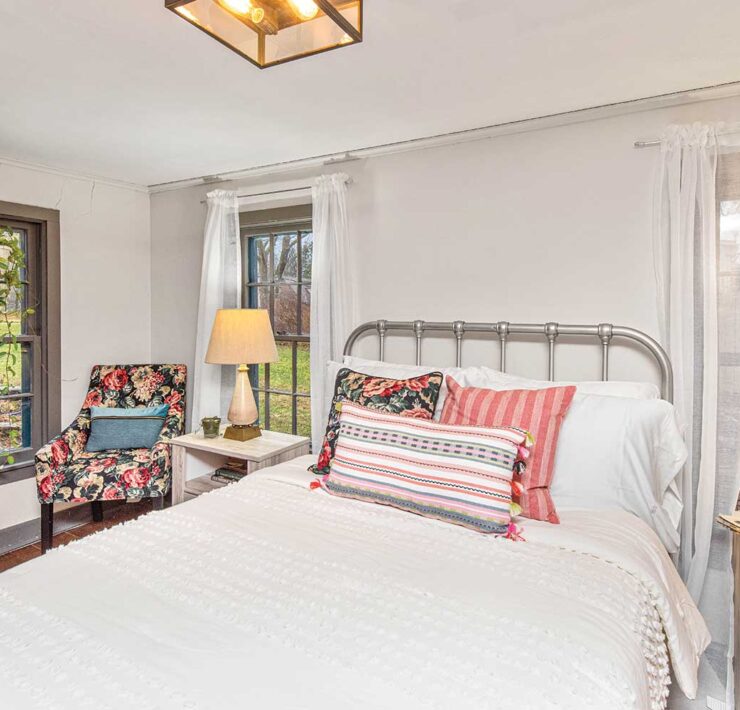 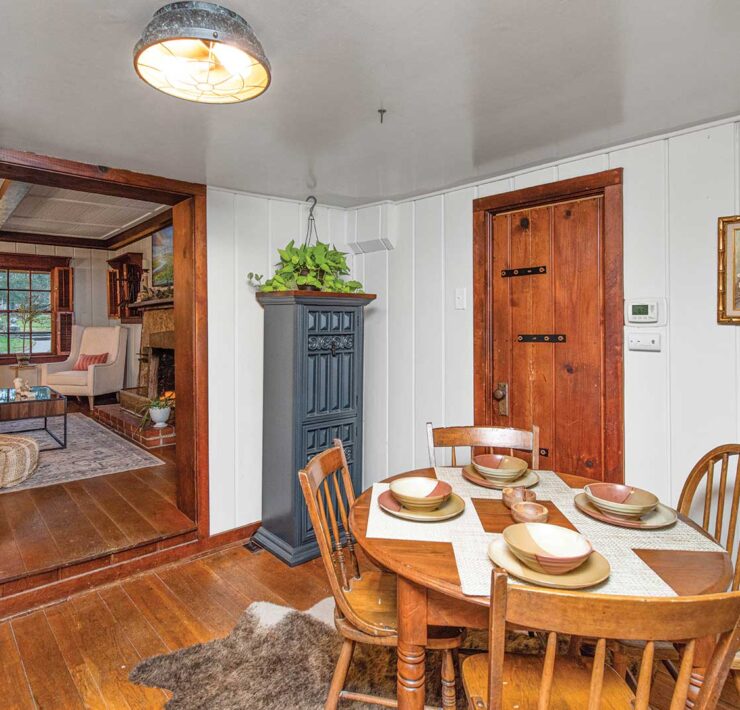 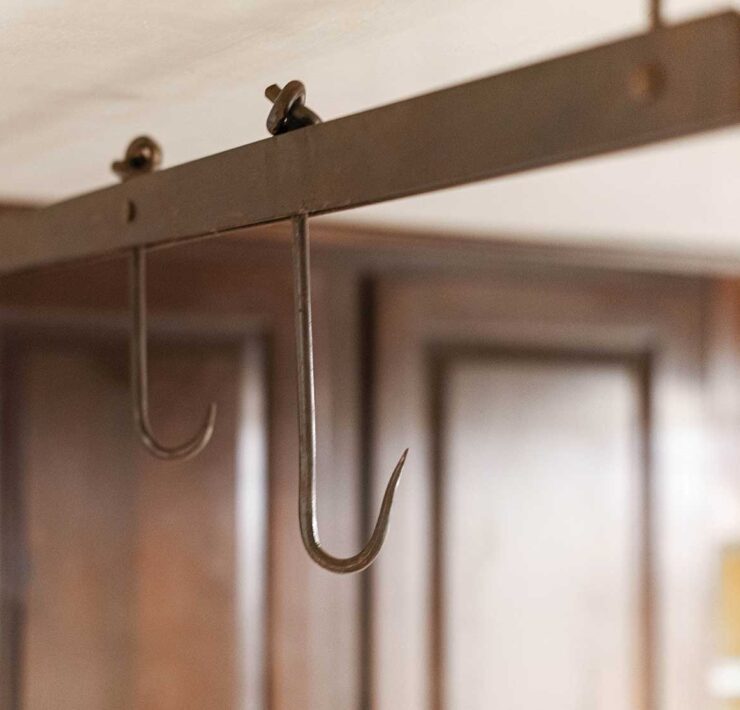 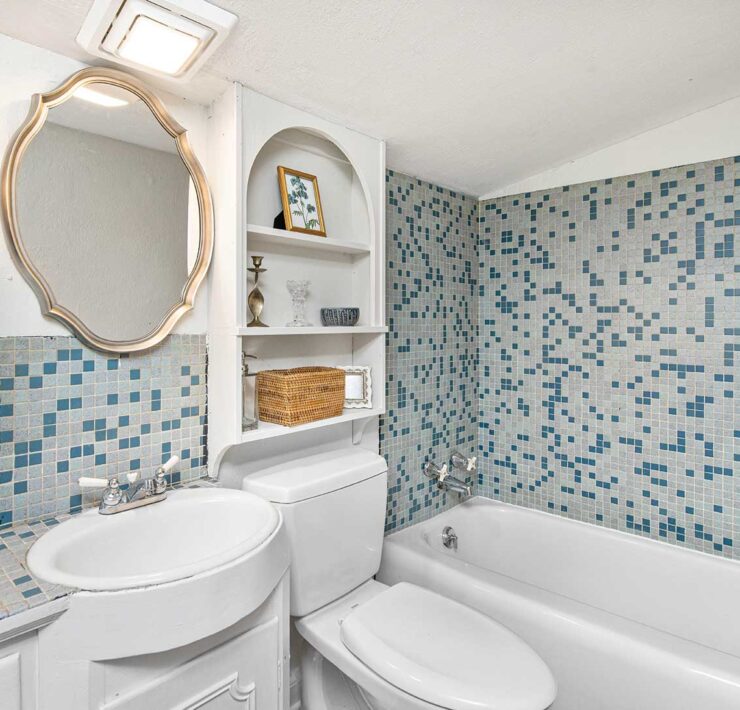 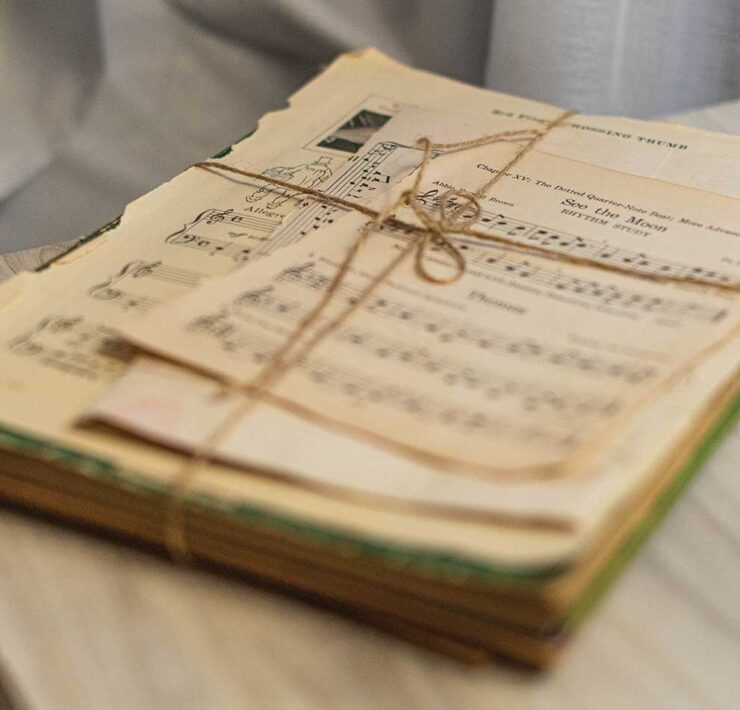 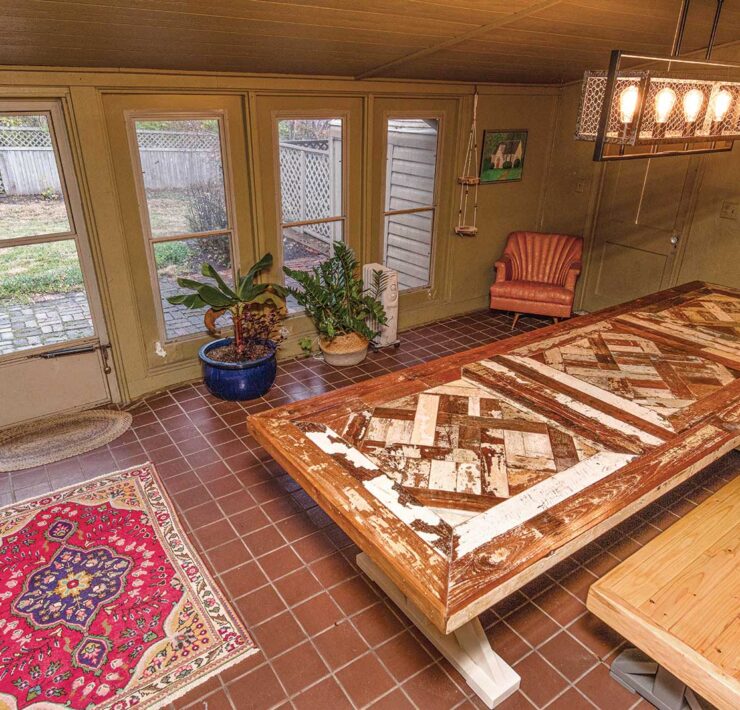 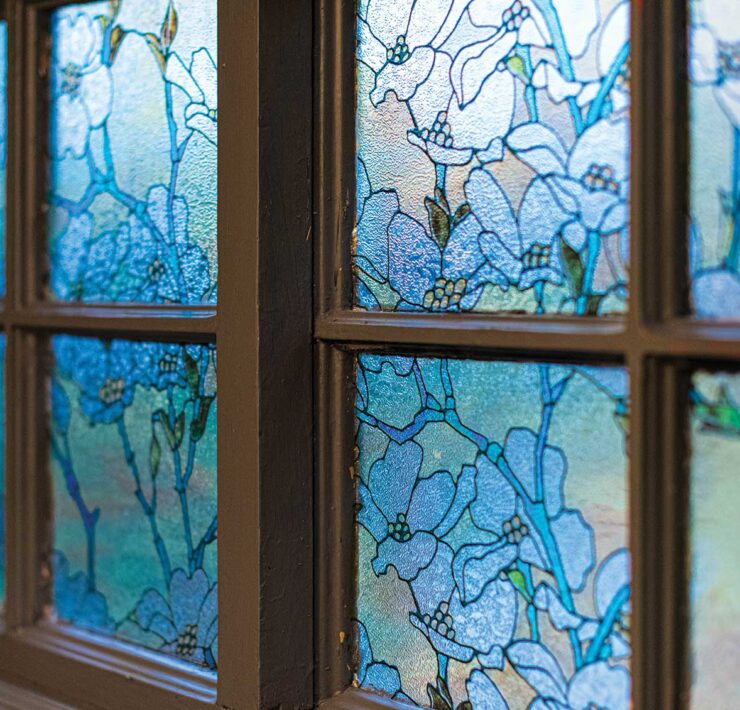 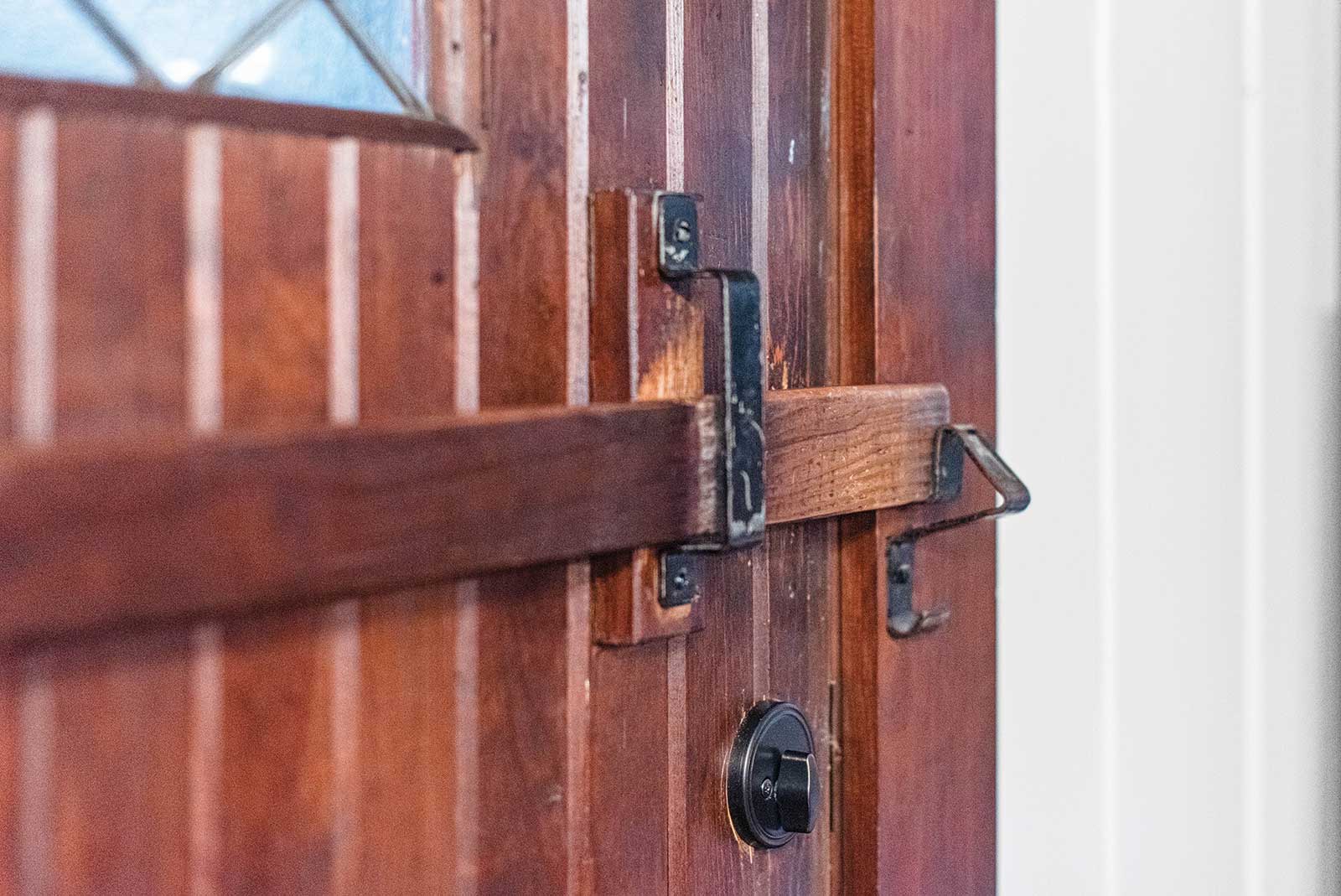 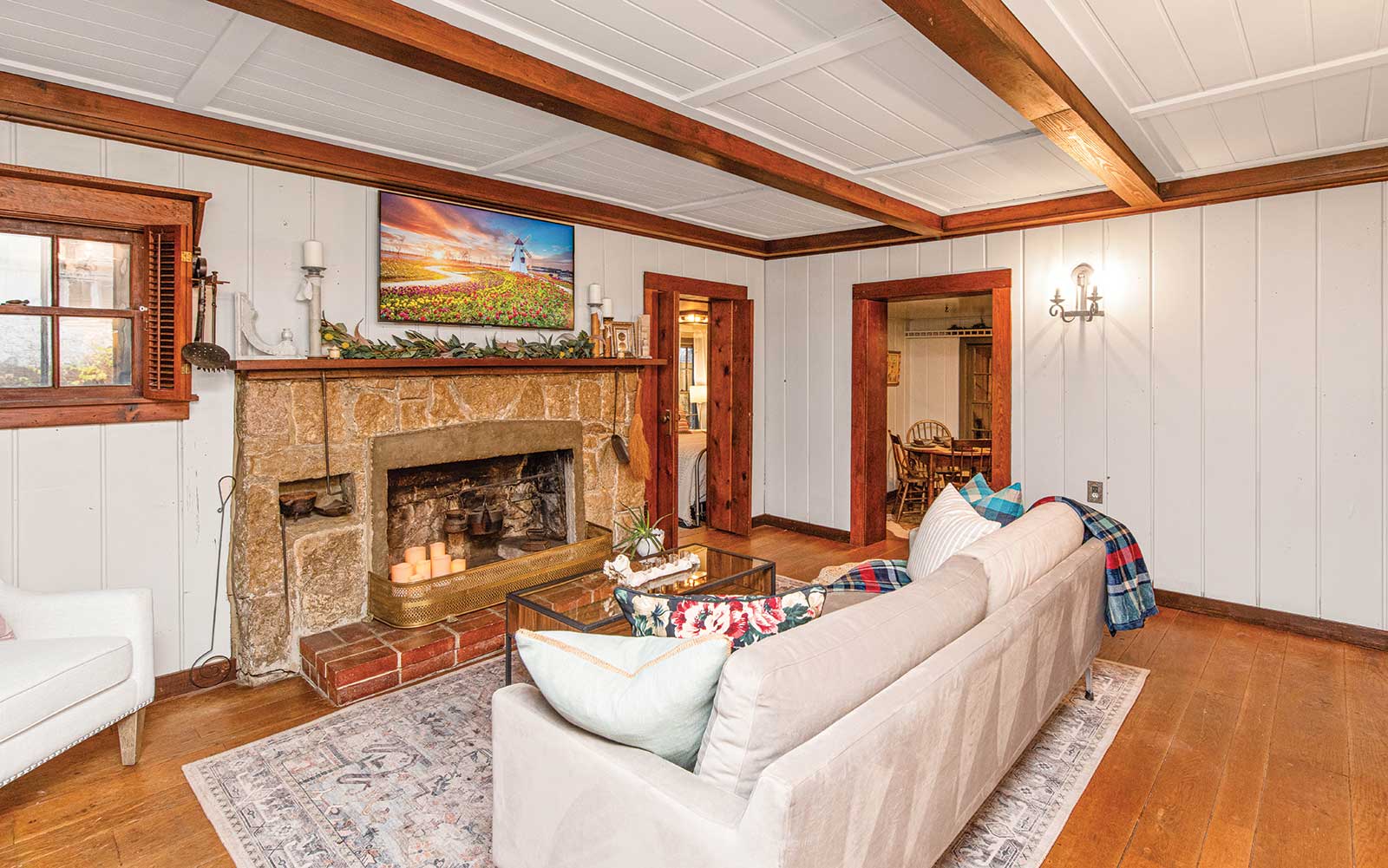 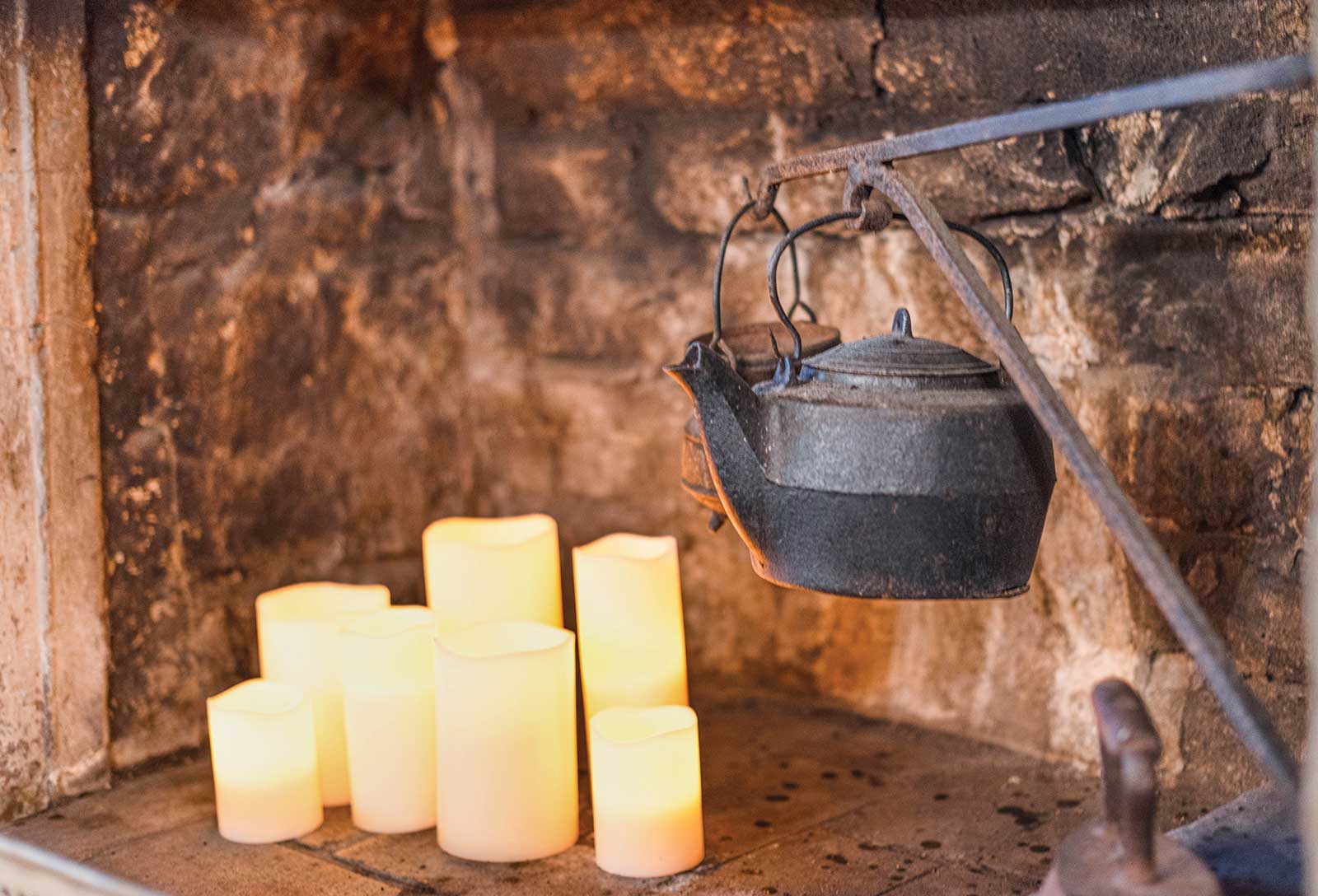 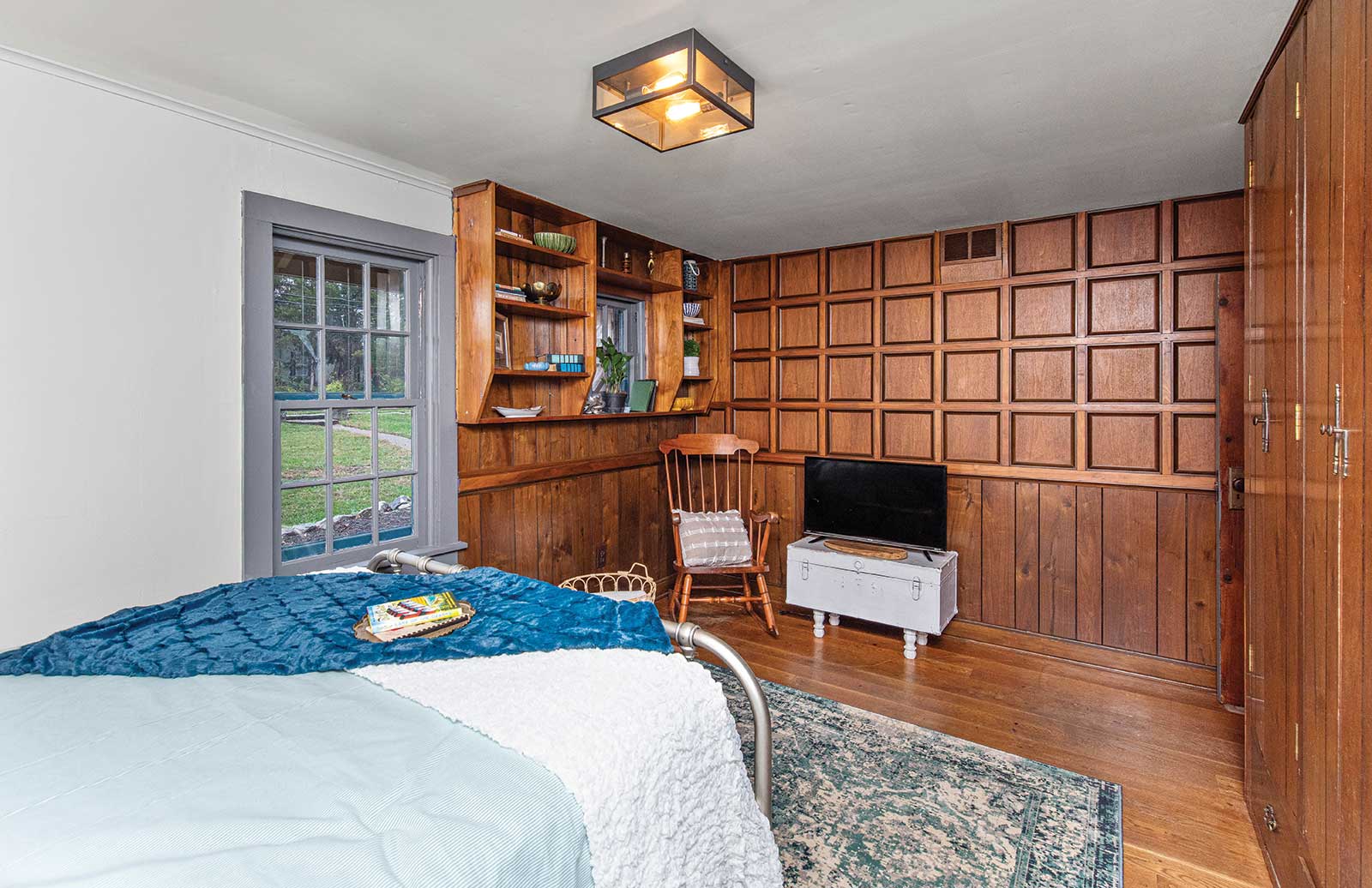 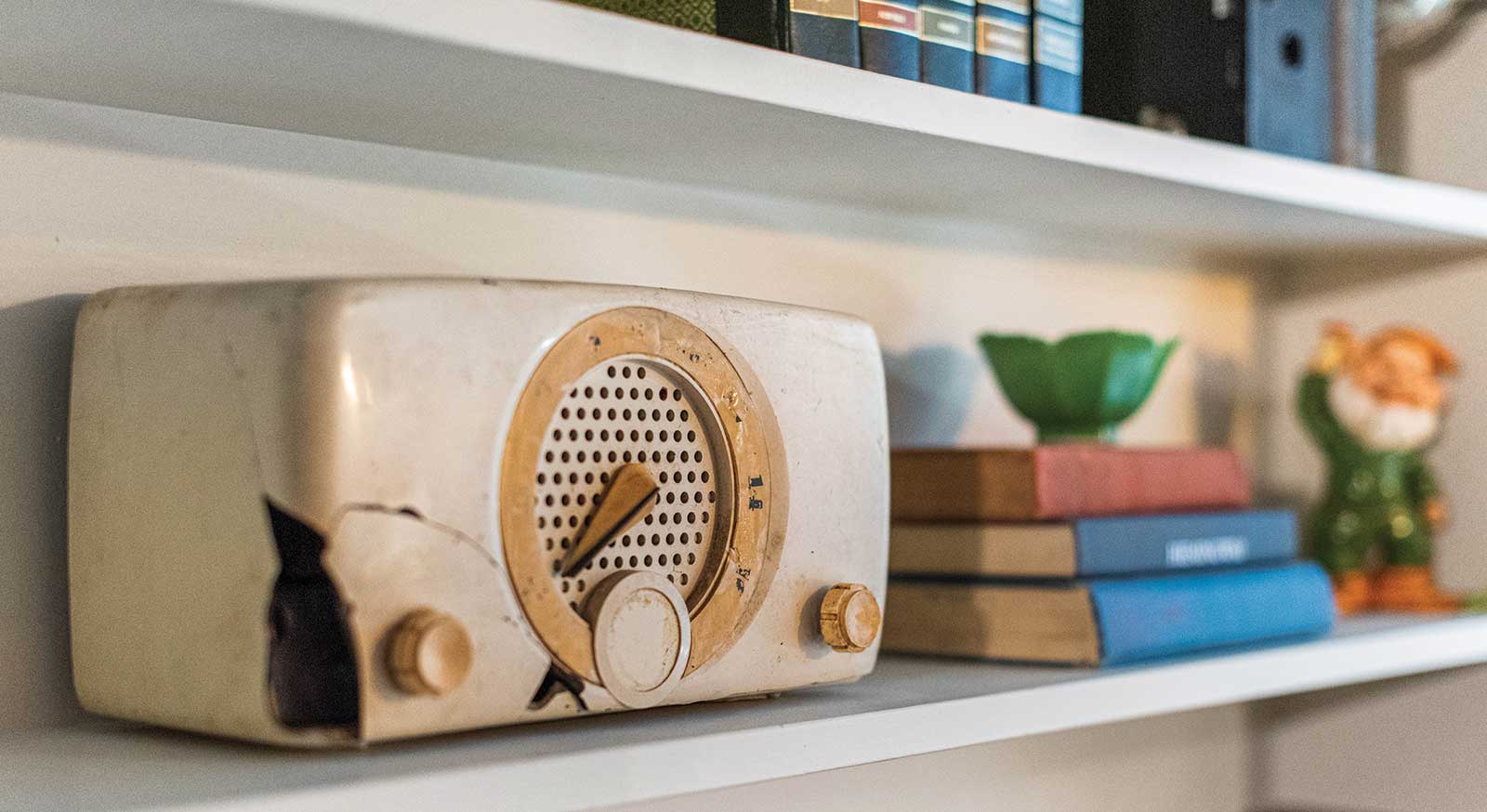 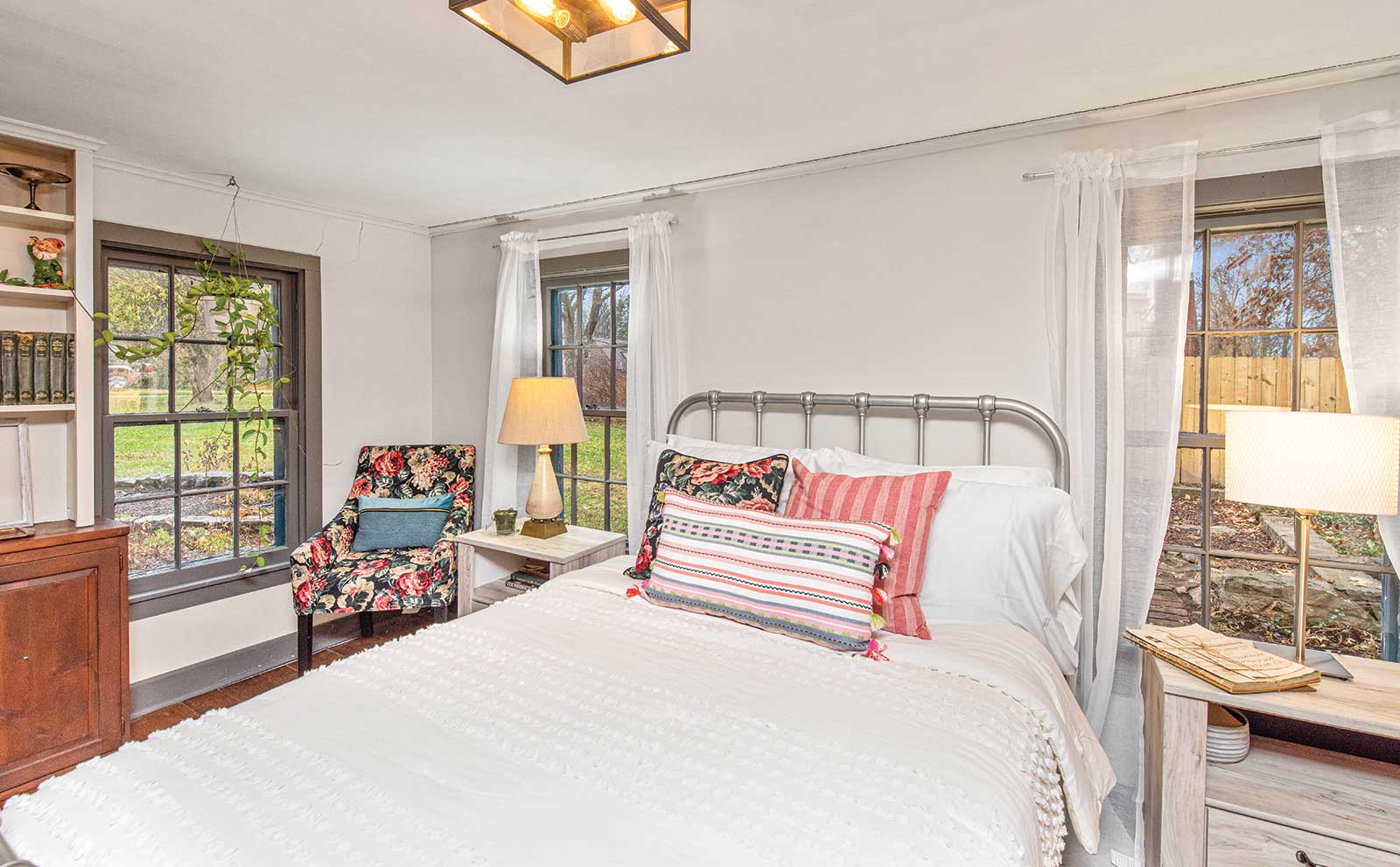 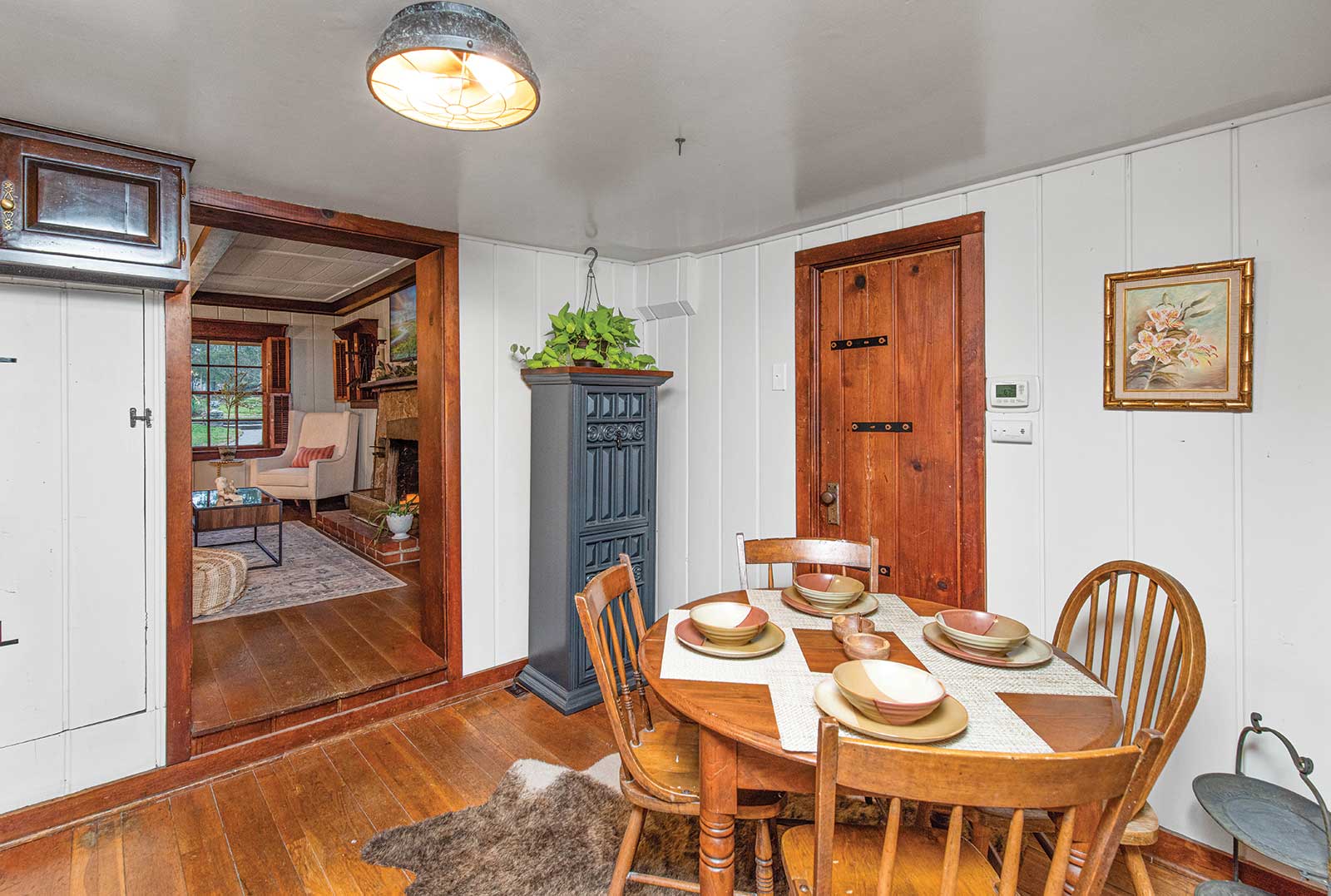 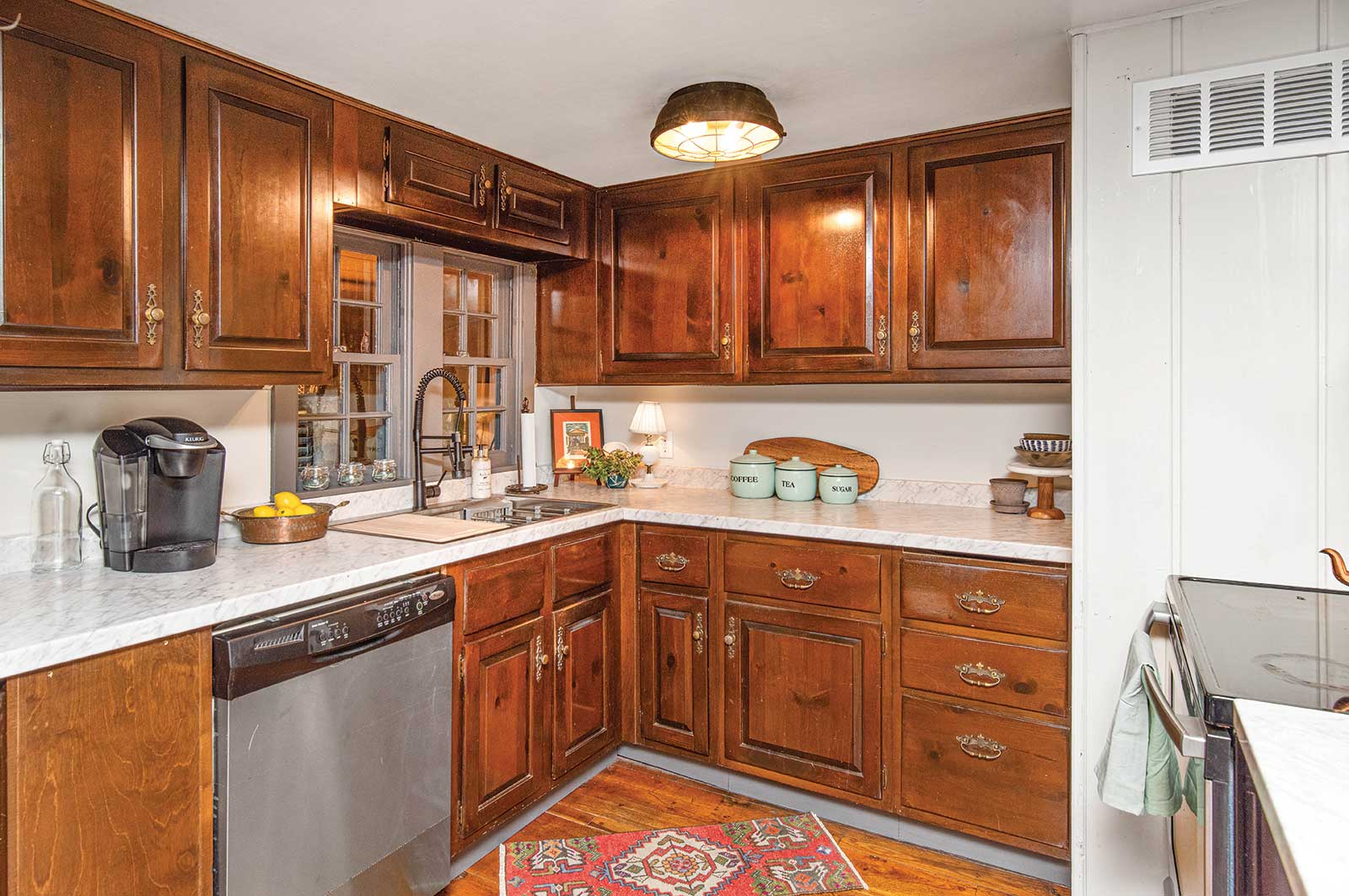 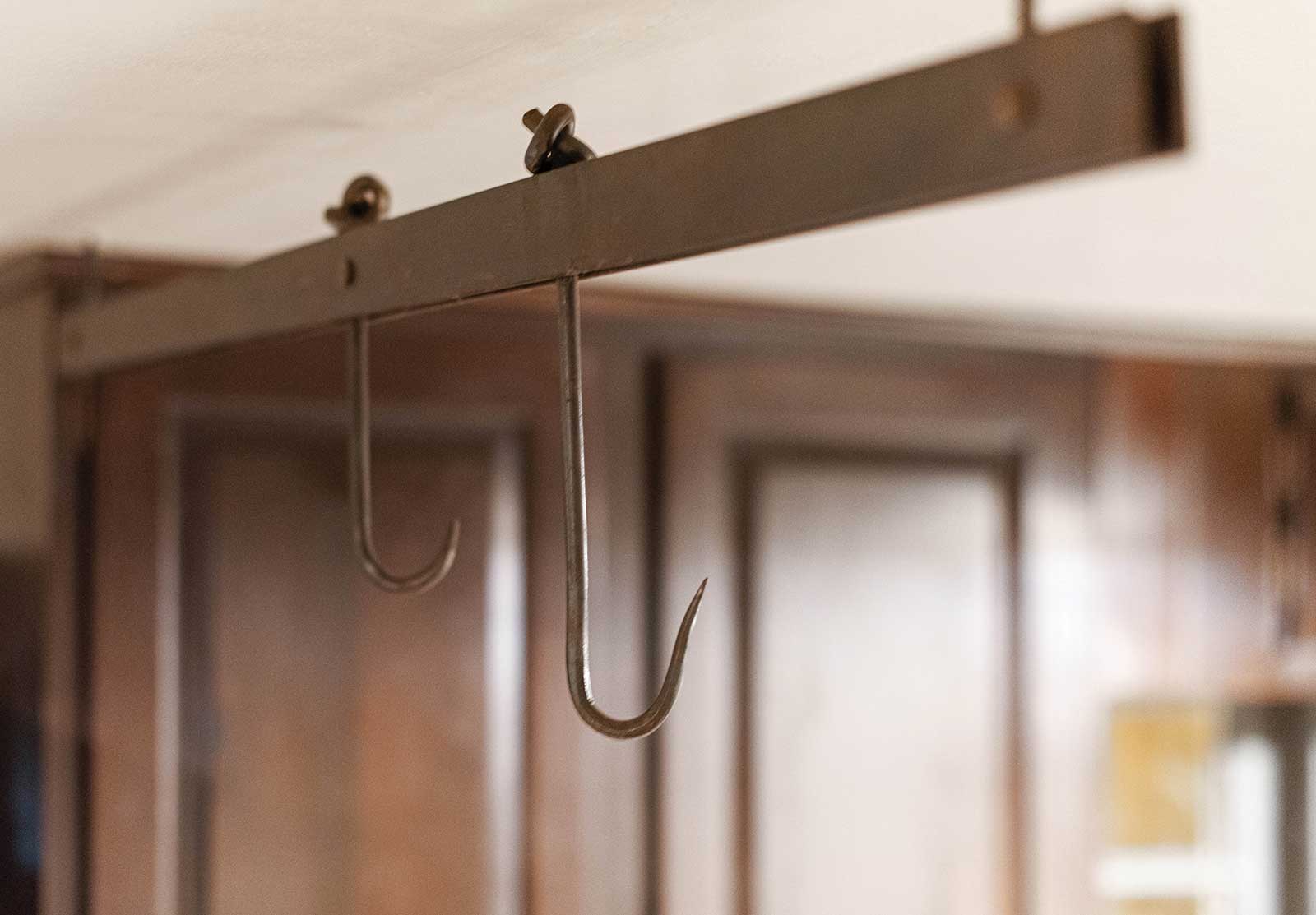 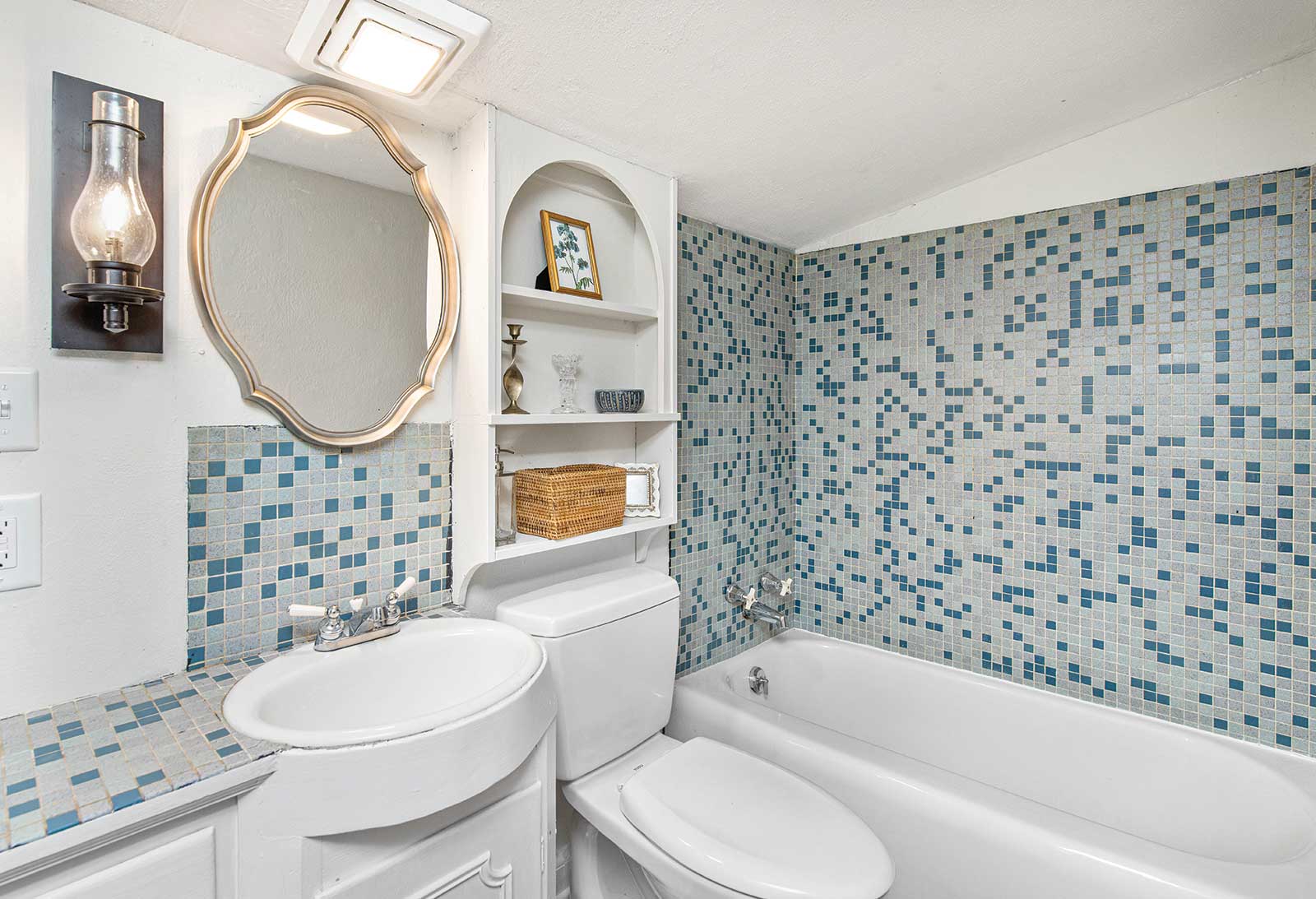 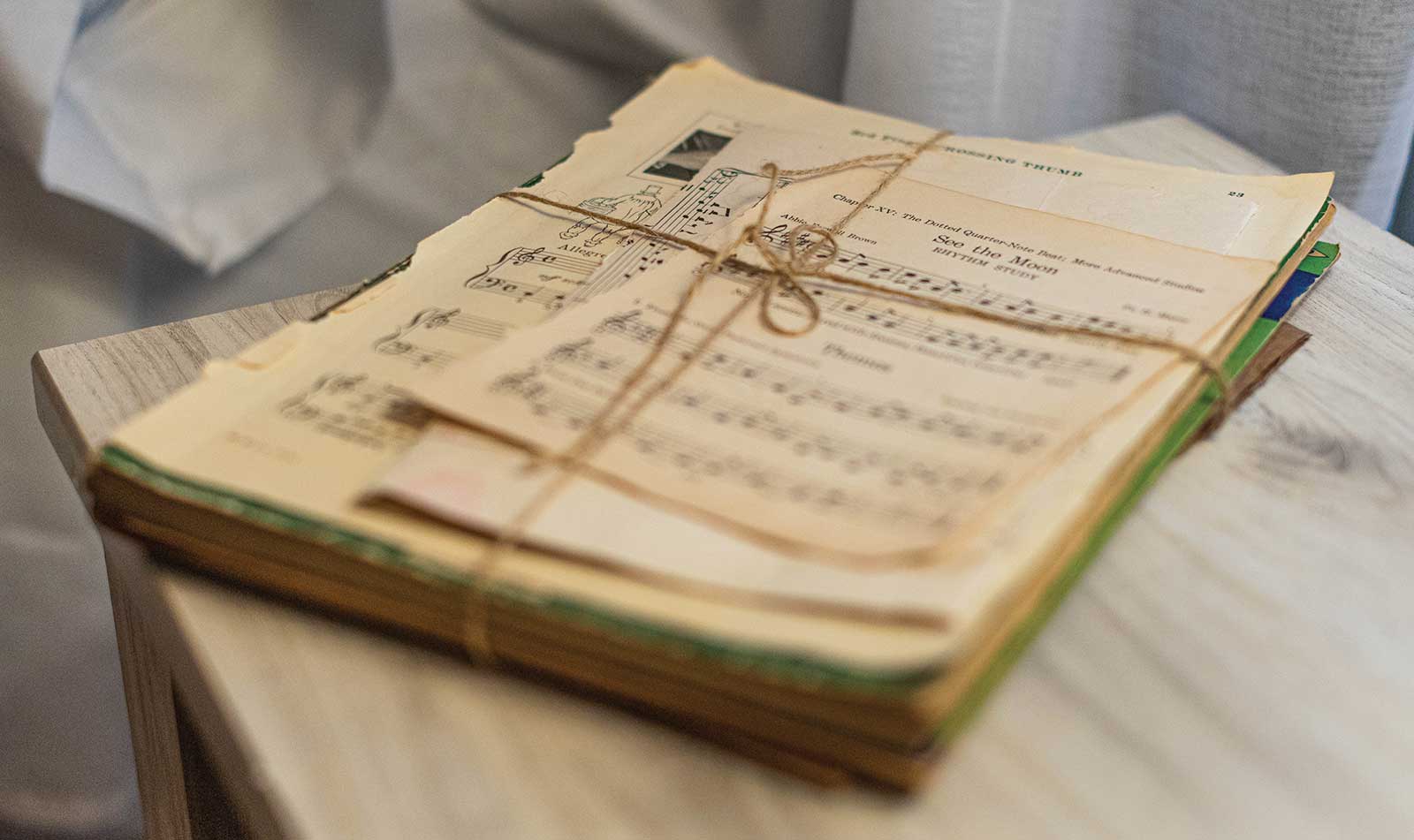 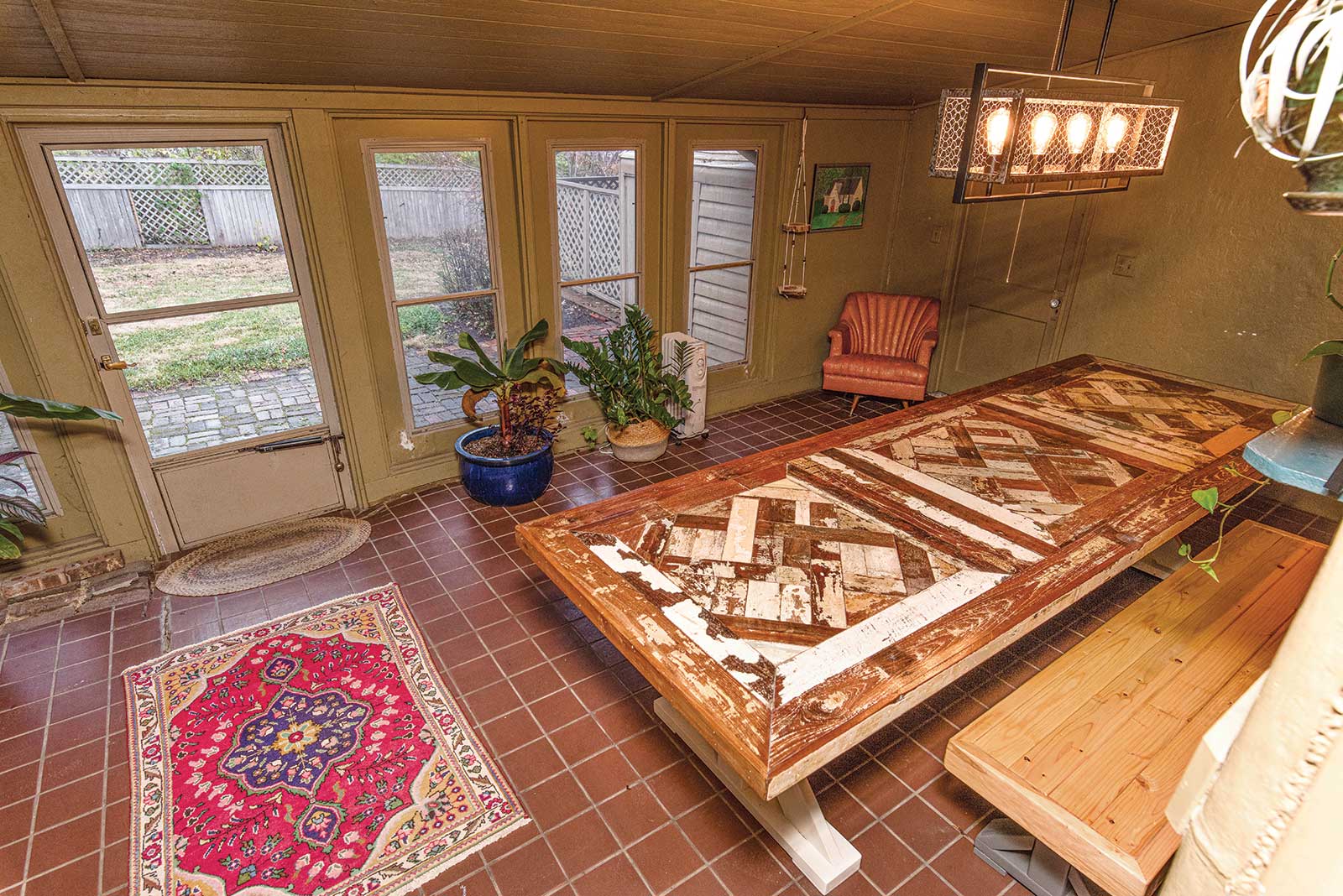 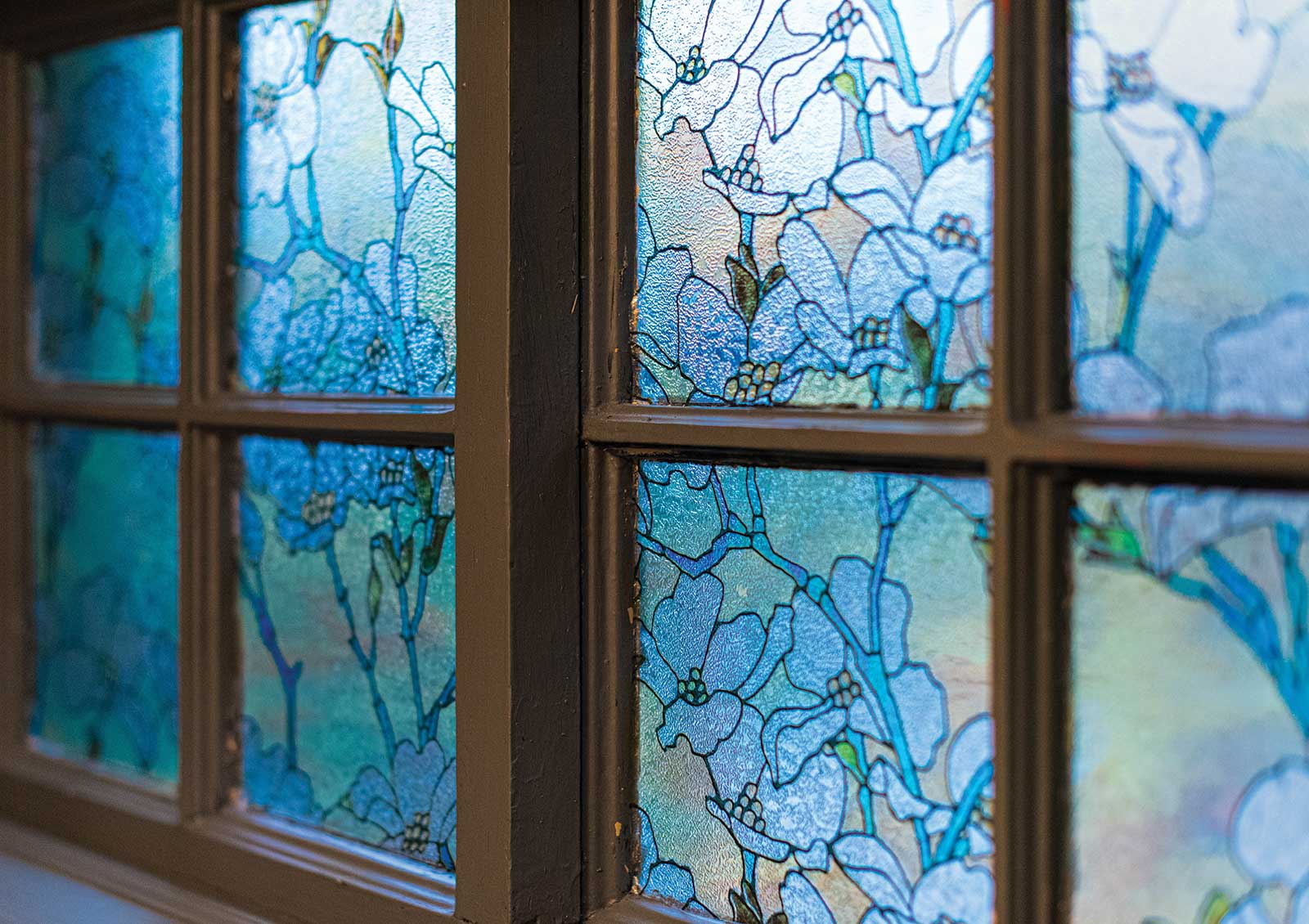 If you’ve lived in Columbia for any length of time, there’s a good chance you’ve driven by the house known by many names: the Hobbit House, the Hansel and Gretel House, the Gingerbread House, the Fairy Tale House. The iconic property at 121 N. West Blvd., at the corner of Ash and West, is one of the most recognizable in town, and now you can stay in it!

The newest owners — Jessie Yankee, director of the Missouri Women’s Business Center, and JD Calvin, co-owner of Berkshire Hathaway HomeServices — bought the property in August of 2020. These business partners, both Class of 2017 20 under 40 alumni, now rent it out on Airbnb and VRBO under the apt name “Hearth and Hobbit.”

A Long and Incomplete History

The long history of 121 West Blvd. is loosely preserved by a patchwork of old records and extrapolation. Nailing down a more concrete history of the house is a goal of Jessie’s.

“It’s my dream to find out more about this house,” Jessie says, adding that she hopes people in the community might come forward with photos and tidbits that can help flesh out the home’s story.

“It’s kind of a mystery who actually built the original cabin, and the cool thing is within this room and that room, the original cabin is still contained within these walls,” Jessie explains, pointing to the living room and one of the front bedrooms.

It’s true that the original builder is unknown, though several articles have cited Arch McHarg as having built on the property in 1911 after felling the trees on the lot that year. Records show McHarg didn’t own the property until 1911, so it’s unlikely he built the original structure, but it seems that he and his wife, Blanche, turned it into the charming cottage we know it as today. The best guess is that the two-room log cabin was built in the late 1800s. At that time, of course, it had no kitchen or bathroom; it was just a small cabin with an enormous fireplace and hearth, which remain in the home today. Records show an addition to the cabin was made in 1935, which added two bedrooms, a kitchen, and a bathroom. Later additions would bring the home to its current 1,000-square-foot, three-bedroom, two-bathroom configuration with a four-seasons porch off the back and a two-car carport.

Nadine Coleman and her husband, OT, purchased the home from the McHargs in 1941 for $1,500; Nadine is responsible for having lavishly landscaped the home. The Colemans also built the third bedroom. During WWII, Nadine opened a preschool for girls, operating out of the master bedroom. She called it the Little Female Seminary; the school bell still resides on property in the backyard. In 1985, Nadine wrote a short book called “The Joy of Gardening,” a photocopy of which can be read by guests. Nadine was a features writer in the early 20th century before journalism was a widely acceptable profession for women. She also wrote “The Mistress of Ravenwood,” published by the Tribune Publishing Company in 1992, a year before her death. A copy of the book is in the collection at the Columbia Public Library.

Mills Coleman, Nadine and OT’s son, says he remembers digging out a space under the house for the installation of the home’s first furnace when he was 14. This space can be accessed from a trap door in the floor of one of the bedrooms, which Jessie keeps covered with a rug. The steps going down to the space are frighteningly steep but lead to a small room that Jessie has considered turning into a wine cellar.

Somewhere around 1957, Herb and Betty Brown bought the house and lived there for 50 years. Betty, who was very active in the local arts scene, maintained Nadine’s gardens. Jessie says reviving the gardens is a priority for the property moving forward. Betty died in 2007 and Herb died in 2010. Since then, the home has changed hands many times. Kristin Bourgeois and her husband, Adam Kaiser, owned it from 2011 to 2013 and rented it out as Creekstone Cottage. It was then under the ownership of the Donald E. Living Trust from 2013 to 2015, then Jason M. Sclater from 2015 to 2018, Michalle Daytona from 2018 to 2020, and now Jessie and JD.

Some might remember that the house was struck by a car in 2016, though, remarkably, no structural damage was done.

When you walk up to the property, it’s hard not to notice that the gutters can easily be cleaned from the ground. But once you’re through the front door, the living room gives way to seven-foot ceilings. The living room is small but cozy, with the massive fireplace commanding focus. The house branches off in three directions from the living room: straight back are the kitchen and porch; to the left are the master bedroom and small but functional en suite bathroom; and to the right, two additional bedrooms are adjoined by a small Jack-and-Jill bathroom.

Throughout the house are remnants of the two-room log cabin that have been preserved over the decades. Jessie says there are places here and there where you can see the logs from the original cabin. The original windows were not boarded up when new ones were installed; instead, they simply reside behind the new ones. The kitchen features old cast iron meat hooks hanging from a track.

Although the meat hooks are a little scary to see at first glance, “It’s one of those things you don’t want to get rid of because it’s original to the house,” or, at least, original to the kitchen, JD explains.

The side of a bookcase off the living room has a hidden compartment on the side. The original front door is a work of art in wood, with a hole for the pull-string lock still in it: The door originally locked with a wood latch, around which a string would travel before going through the hole. Pulling the string from the outside lifted the latch and opened the door, and at night, you simply pulled the string inside!

While the old is abundant in the historic cottage, modern amenities also abound. Besides the flat-screen TV in the living room, the kitchen has all modern appliances; the house has Wi-Fi, central heat and air, outdoor security cameras, and a washer and dryer for guests. Oh, and there’s plumbing and electricity too!

There is some notable art in the house. JD’s sister, who lives nearby, made a mixed-media collage of the house, which hangs in the living room. On the porch, there’s a painting of the house that Jessie received in the mail one day from a stranger, Peggy Quinn. It included a note that says, “My daughter [Emily] painted this in 2000 when she was in eighth grade,” and she thought Jessie should have it.

“Any artwork or mementos of the cottage are welcome! We love to display anything to do with the deep history and love of the home,” Jessie says.

Renting the home out through Airbnb and VRBO is an ideal way to preserve the legacy of this little cottage, JD says.

“I think there are a lot of people out there who go, ‘They’re taking this relic and turning it into an Airbnb.’ Some people have opinions about Airbnb — they don’t like it,” JD says. “But I think that Airbnb is what’s going to keep this house going for another 100 years, because it’s being gently lived in instead of being lived in every single day. Rental is a good fit for this house.”

The cottage has been consistently rented out since its first booking for Christmas 2020. Perhaps not surprisingly, Jessie says about a quarter of the bookings have been from local residents who are curious to see the inside and experience what life might have been like 100 years ago. Jessie says the house does not seem to be haunted — it’s a question she gets about the home frequently.

“One of the greatest things about the cottage is how much the community loves it!” Jessie says. “We both really care about Columbia and want to keep this place preserved for Columbians.”