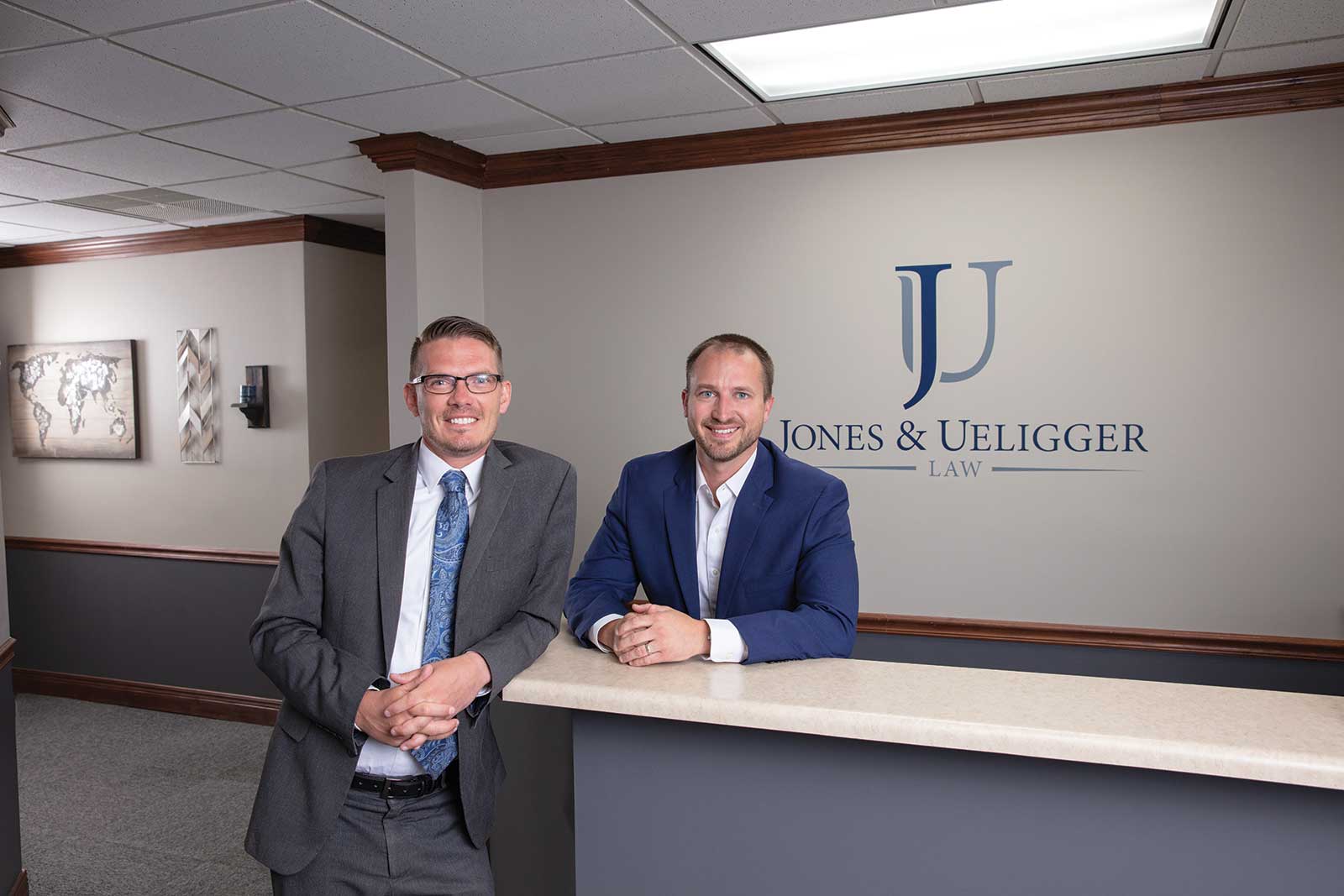 A rebrand offers a chance for Jones & Ueligger Law to take their next step in serving Columbia families.

Commitment can be daunting, but it often proves to be worthwhile. When it comes to romance, commitment may mean that if you like it, you put a ring on it. However, when practicing law, this means putting your business associate’s name on the door. This is certainly the case when it comes to friends and fellow attorneys Nathan Jones and Ernie Ueligger of Jones & Ueligger Law.

In June of 2016, Nathan Jones opened his own law firm under the name Nathan Jones Law. “That was just me sitting in an office,” Nathan says. “Thankfully I had plenty of clients to keep me busy, but it was just me.”

The firm grew over time, and Nathan hired more staff as the firm became busier. In June of 2018, Ernie Ueligger joined the firm as a partner. Nathan explains, “He’s been a partner since then, but we kept the name Nathan Jones Law because we just weren’t quite ready to rebrand.”

In January of 2021, Nathan and Ernie made the ultimate business commitment and decided to rebrand to Jones & Ueligger Law.

“It’s one of those things that was just a long time coming,” Nathan says, “We had grown to the point where [the name] Nathan Jones Law wasn’t reflective of what the firm was anymore, and it was time to get Ernie’s name on the door to reflect that he’s a partner and [show] the work he does here.”

Though Nathan and Ernie’s business partnership began in 2018, their friendship began years ago, at the MU School of Law, where they both graduated in 2011. Since they were in the same section, Nathan and Ernie shared many of the same classes, often sitting by one another or studying together. However, it wasn’t until the Barrister’s Ball, which Ernie describes as “basically law school prom,” that they discovered just how alike they were and began to form a friendship.

“We actually became friends after our families became friends,” Ernie says. Nathan, Ernie, and their wives found themselves all sitting at a table together at the Barrister’s Ball. “At the time, Nathan’s wife was visibly pregnant, and [my wife and I] just found out that we were pregnant with our second child. We hadn’t even told anybody yet,” Ernie says. “Our wives bonded, and once wives bond, husbands kind of come along, too.”

Ernie says that he and Nathan are both very family-oriented people, which has translated into both their personal and professional relationships. “It worked out perfectly,” he says. “Now, we get to see each other nearly every day, and our wives talk when we hang out, which is pretty often. The Barrister’s Ball is really where it all started.”

Despite Nathan and Ernie’s many similarities, they do not practice the same types of law. Nathan has been practicing estate and business law since graduation, but after dabbling in the subject for a few years, Ernie found that estate and business law wasn’t his passion. Now, Ernie practices personal injury, worker’s compensation, and family law. Ernie says that, “We don’t do anything the other person does, but together, we offer quite a few services.”

“We’re not necessarily a one-stop-shop by any means — we don’t do traffic tickets or criminal law or things like that,” Nathan says, “but the hope was that clients could come visit our firm and that we would be able to help them with a lot of things that might come up in their lives.”

Since its inception in 2016, the newly-rebranded Jones & Ueligger Law has grown exponentially, from Nathan being the sole worker to having a staff of six employees with the intention to hire more in the future.

“We’ve always let our client base and the market dictate our growth and where we’re heading,” says Nathan. “I would foresee that we’ll add another associate attorney as our practice areas grow, Ernie’s in particular. He’s quite busy.”

At this, Ernie laughs in agreement.

“We are nearing the point where we will need another person,” Nathan says. “Ultimately, we’d like to be in our own building, which is one of our long-term goals for sure.” Nathan explains that as the firm expands, so do their needs, and they’re looking forward to finding a space that they can fully customize.

Dreaming of the possibilities is only possible because of a strong present foundation. Adding Ernie’s name to the door reflects the ways in which the firm has come of age since 2016.

“When we started hanging out together and with our families, we realized we had a very strong family drive,” Ernie says. “Everything we do here, we want to be focused on families and helping families. The areas of law that we do [may have] built us to be family people, or because we already were family people, that melded well with what we do. We’ve focused on continuing to help families, no matter what we do. [For example] Nathan’s business law: With every small business out there, there is a family supporting it.”

For these two friends, the importance of family is embedded in every aspect of their work. As Ernie says, “Our kind-of motto is, ‘We’re here to protect and plan for your family.’”

May 2011
Nathan and Ernie graduate from MU Law School.