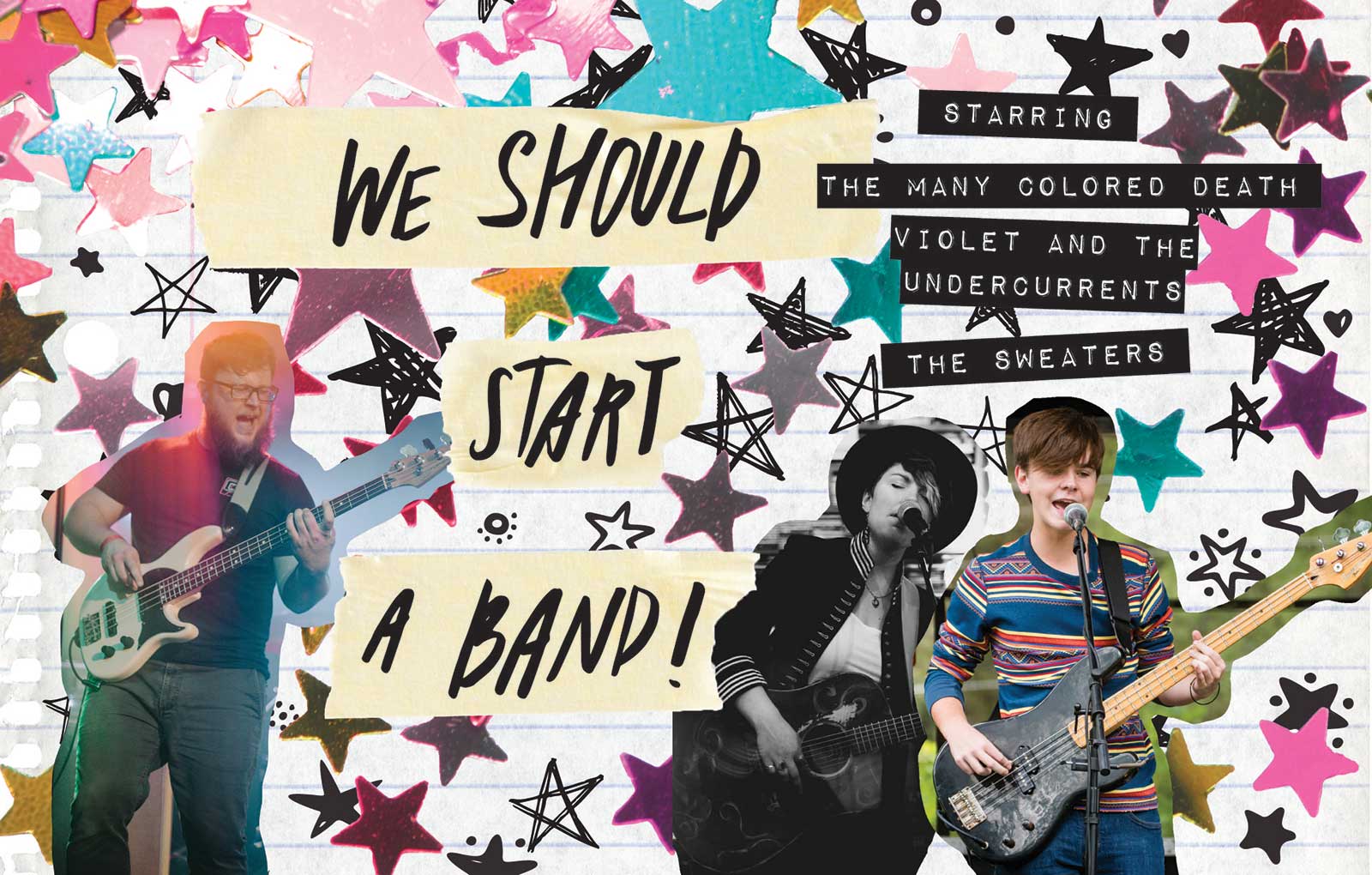 Starring The Many Colored Death, Violet and the Undercurrents, and The Sweaters

From the moment the words “we should start a band” were uttered, a series of events followed suit. Countless rehearsals, shows, and connections that led to bigger stages and recording sessions. We spoke with three Columbia bands — The Sweaters, Violet and the Undercurrents, and The Many Colored Death — to find out how they started and what their life is like behind the scenes.

Violet and the Undercurrents

Violet Vonder Haar has fond memories of her early musical journey. She remembers the talented professors who taught her guitar and voice lessons. She remembers the life-changing experience of attending a fine arts academy during her junior year of high school.

But beyond that, she has no memories of a consistent space where she could collaborate with other young musicians during her teenage years. Determined to change that for Mid-Missouri’s youth, Violet and her wife, Phylshawn Johnson, have created a life shaped by music, community, and a commitment to education.

Among many other responsibilities, Violet and Phylshawn are music instructors and camp and board directors at Compass Music Camp, a program focused on giving young, aspiring musicians the opportunity to learn, network, and perform.

“We’ve been teaching private lessons for more than 10 years. During COVID, we’ve continued to teach online, which has been a huge blessing. We both love to teach,” Violet says.

They first recorded together in 2010, when Violet invited Phylshawn to play drums on her EP “V-Sides and Rarities.” A year later, they formed Violet and the Undercurrents, with Violet as the lead vocalist and guitarist and Phylshawn as the drummer. The band has gone through different iterations over the years, but the quartet is now completed by bassist Linda Bott and guitarist Lizzy Weiland.

Together, the band released the “Nashville Sessions” EP in 2016 and “The Captain” album in 2019. They joined David Wax Museum on a national tour and have appeared at music festivals across the country. However, in what is now an all-too-familiar story, everything changed in 2020.

“It’s been almost a year since we played together, which is really sad. But we are starting to see light at the end of the tunnel and trying to get an idea of where to go next,” Violet says.

Violet says recording is the band’s next goal. When and if touring becomes safe again, she wants to explore more sustainable options. She talks about Rising Appalachia and the Slow Music Movement, which encourages artists to bond with the communities they visit, consider alternative methods of transportation, and support local businesses. Violet correlates the need for change in the music industry to a global call for transformation.

“All of these systems that have been crumbling, that we have no choice but to build back, how can we make them better?” She asks. “How can we build them sustainably so that they involve more voices and offer opportunities for real connection?”

The band needed a name. It was a cold February night in 2017 and Ben Cohen, Henry Cohen, and Anders Harms were about to step onto Café Berlin’s stage for their public debut as a band. After the Cohen brothers and Anders attended Compass Music Camp in 2016, they decided to start a band and had been rehearsing for a few months. Two of them were wearing sweaters that night, so they decided that should be the band’s name. What would’ve happened if they were wearing overalls or trench coats? “I think The Trench Coats would still be a good name for a band,” Ben replies after a pensive smile.

When they attended camp, Henry was 10, Anders was 12, and Ben was 13. They bonded over their shared interest in Green Day, Pixies, and Nirvana. After Violet Vonder Haar and Phylshawn Johnson, musicians and leaders at Compass Music Camp, invited them to play at that first Open Mic Showcase, The Sweaters started playing at happenings all around town.

With Anders on the bass, Ben on lead vocals and acoustics, and Henry on the guitar, the indie band made it to stages at Roots N Blues and the True/False Film Festival. Anders says that sharing the stage with bands like It’s Me: Ross and Sissy Paycheck was a turning point for him, “It was our introduction into the Columbia music scene,” he says.

Darkroom Records, a free recording studio available to students in Columbia Public Schools, planted the first seed. “When we wanted to start recording music, it was really easy to sign up for Darkroom. They helped us out and it went pretty smoothly. It’s a great resource,” Henry says.

Later, The Sweaters started recording at Centro Cellar Studio, and in 2020, they released their album “The Sweaters,” which they recorded with Wil Reeves.

“When we got in the studio with Wil, we really started making decisions about how we would sound as a band and how we would think of ourselves as a band. We were consciously making music, and that was a big change for me,” Ben says.

The Sweaters’ members are young, but their talent is extraordinary by any age measure. With admirable ease, their rich sounds and raw lyrics convey vulnerability, an imaginative worldview, and an ability to live life to the fullest.

The group’s cooperative dynamic makes all that possible. Ben puts his arm over his brother’s shoulder as he reminiscences of when they began writing songs together, long before the band existed. “Henry was into Greek mythology and writing about Greek Gods,” he says.

Then, he looks over at Anders as he talks about their current creative process. “It’s a dialogue. Anders is very compatible with how we do things. He’s a really smart musician and has opinions that we respect a lot,” Ben says.

Their admiration for each other and their collaborative approach is refreshing — a rarely represented showcase of brotherhood, talent, and infinite potential.

Albums and merchandise available at thesweaterscomo.bandcamp.com

The Many Colored Death

A college town’s music scene can either be defined by its transient talent base or by the bands that stand the test of time. For more than 10 years, Brent Moore, Preston Rodgers, and Shea Spence have been rocking together as The Many Colored Death. Named after a character from “The Neverending Story,” the band’s spirited sounds are worthy of a foot-tapping, head-bobbing, music-induced trance.

When Brent moved back to Columbia with his family, he knew he wanted to start a band. “I wanted to prioritize that because I’m a happier person when I’m playing music,” he says. With Brent on guitar and vocals, Preston on bass, and Shea on drums, the trio found a sound that was uniquely them. “Our styles gelled so well,” Brent recalls.

The decade-long journey began. In between shows and album releases, the members’ lives changed. They started jobs, had kids, developed new hobbies. Shea works in human resources and is growing her audience as a Twitch streamer. Preston works with developmentally disabled adults and welcomed a baby to his family this year. Brent owns his own guitar repair shop and, alongside his wife, is seeing his daughter and son grow.

“This is a part of our life. We practice twice a week for 2 to 3 hours each time. It’s a big chunk of our week, but it’s something we’ve dedicated ourselves to over the years,” Shea says.

In 2020, a radio mix of their record “Drown” climbed to the first spot on the Most Added list of Billboard’s Mainstream Rock Indicator Chart, bringing the group a new measure of success.

“Whenever we take long breaks and are not able to perform, like the last year, I have to throw myself into the recording and writing aspect of things,” Brent says, “Performing is definitely fulfilling, just to be able to go up on stage and get all of that energy out in a positive way that allows you to connect with people.”

During a year of halted concerts, MCD found new ways of connecting with their audience. They launched a series of cooking videos titled “Recipes that Rock,” where they teach fans to make dishes like creamy nachos and peach cobbler.

“We love food and call ourselves a food band. I don’t know how it became our thing, but it did,” Shea says.

Cooking videos might seem like a marketing gimmick for any other band, but they feel true to the essence of MCD. Watch the band rock under bed sheets on their music video for “Dummy,” or watch Preston take the title of Taco King on “The Sieve” and it becomes clear. MCD shares more than their dedication for music — they share a sense of humor, authentic camaraderie, and a craving for food that rocks.

Albums and merchandise available at the-many-colored-death.square.site