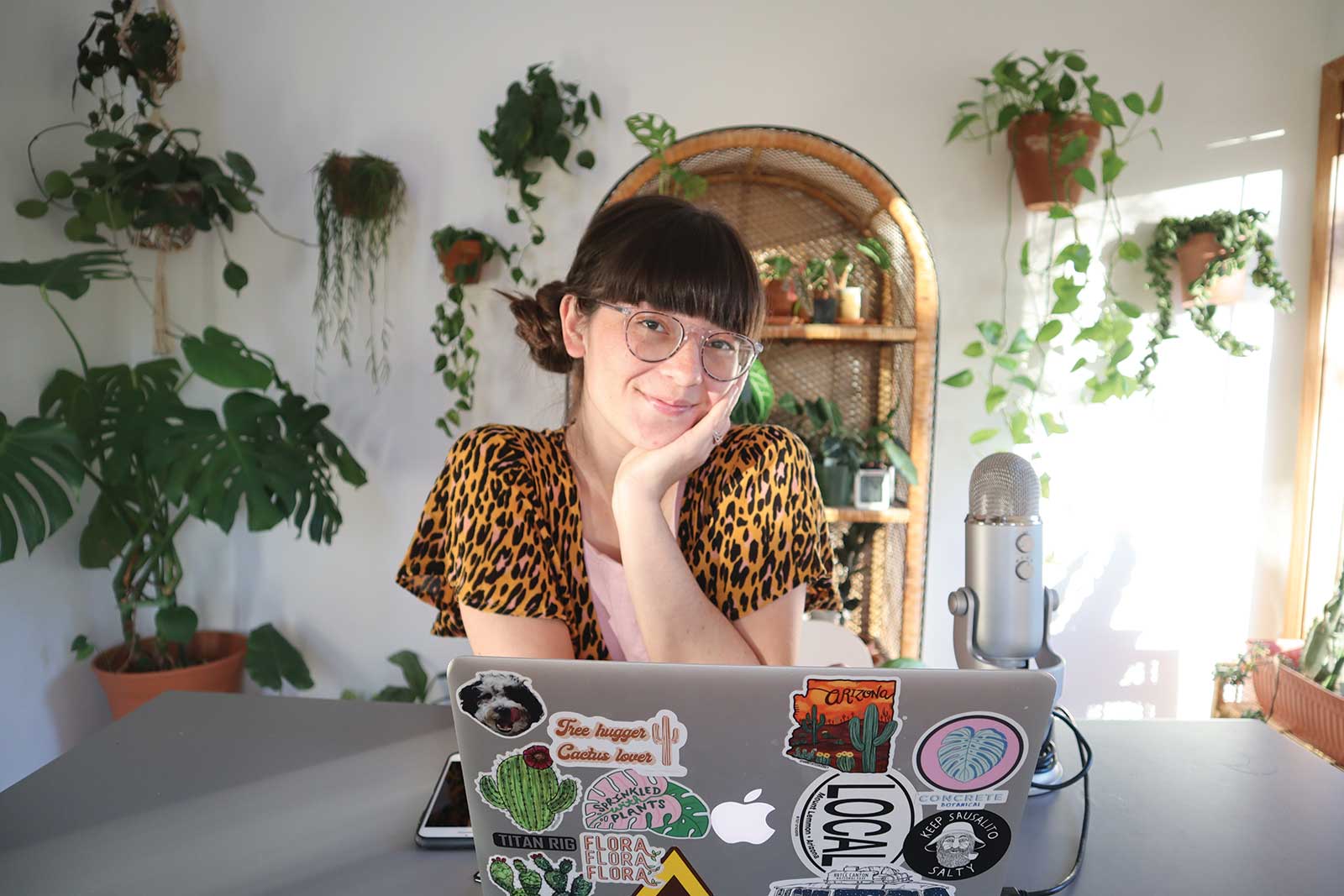 “I didn’t always have plants,” says Becca De La Paz, a houseplant enthusiast and self-described “plant-tuber.” Upon seeing her massive collection of greenery, an indoor jungle filled to the brim with exotic tropicals, it’s almost hard to believe that Becca wasn’t born with a plant in her hand.

“My parents had house plants — pothos, snake plants — and my grandma had a beautiful flower garden. So I’ve always known about plants, but there is a big difference between knowing they exist and really feeling their presence,” Becca says, adding that, despite her familiarity, it wasn’t until college when she began to build her own collection. Starting with only a few cuttings, which have since grown into full-blown plants, she began to nurture what she knew would be a lifelong obsession.

A Journey to Discover Her Identity

“After college, it became this new journey,” Becca says. After graduation, she struggled with her identity and figuring out plans for the future. “I wasn’t sure what I wanted to be, and I still feel that way sometimes, but plants are a great way to keep you grounded and keep you present in the moment,” she says.

After a short stint as a teacher, Becca still found herself unsatisfied. It was only after trying to find a way to combine her love for teaching, performing, and houseplants that Becca found the perfect avenue to showcase her talents: YouTube. After starting her plant-themed YouTube channel, Becca De La Plants, a few years ago, she has amassed over 44 thousand subscribers and nearly 4 million views.

“I liked the act of teaching and sharing my knowledge, so I found my YouTube channel to be a great way to continue being a teacher,” she says. “I grew up being a ham — I loved being on stage — and it is an opportunity to do those kinds of things and fulfill my inner child.” Becca laughs as she reminisces. She goes on to say what a wonderful opportunity her YouTube channel has been. “It’s a great way to connect with people. I’ve made some really awesome, possibly lifelong friends through my YouTube channel and plants in general. I just think people who grow and cultivate plants are a different type of person, and, typically, we get along really well.”

While Becca’s YouTube channel has found success, it isn’t her full-time job just yet. She still works in marketing, which she says has given her valuable skills to use when marketing her own online presence.

Making the Move from the Desert to Mid-Missouri

Last fall, Becca and her husband made the move from Tucson, Arizona, to Columbia. While moving from the desert into the land of ever-changing weather has been a bit of a culture shock, Becca loves it, saying: “The change of scenery is nice because I did not grow up around trees or grass. It’s so green.”

In addition to the weather, Becca has been impressed with the Columbia community, which has welcomed her with open arms. “Maybe it’s the Midwest, but people are just so nice — it’s so different from Tucson. [In Tucson], no one really looks at each other or smiles, nobody asks how you are or cares. That’s kind of a cultural shift for me.”

With a giant plant collection and a 20-hour drive, the move from Tucson to Columbia was not the easiest. “We put them all in a U-Haul, so basically we were just driving down the highway with a giant U-Haul full of plants,” she recalls, “I brought my entire collection, but I put my more sensitive plants in my car so it could be more temperature controlled.”

Adapting to the Cold

Becca and her husband made their move in September, so while it wasn’t the worst time of year for plants, it still wasn’t optimal. “There definitely were some plant losses, and some plants that won’t be the same for a while, but that’s okay because it’s a big transition! For the most part, they’re all doing super well.”

“The number one issue I have dealt with so far is the cold,” Becca explains, “In Southern Arizona, where I’m from, we don’t experience a dormant period for our plants. They grow all year long because the weather doesn’t change much. Getting used to that, for the plants, has been difficult. Here’s a tip: Be aware of your plants that are close to windows, because it gets really cold and can damage them. That’s something I learned the hard way here.

“Also, the light!” she exclaims. “In Tucson, we basically had 350 days of no-clouds sunlight. Here, going weeks at a time without a clear blue sky is different, especially for my plants.” However, Becca says this is certainly not the end of the world, as you can use grow lights to compensate for the lack of natural light that Missouri is prone to, especially in winter.

At first, Becca was very worried about her plants, but now feels as if the change has given her more opportunity to learn, grow, and hone her house plant knowledge. Additionally, she has been absolutely charmed by the Columbia plant community. She mentions Helmi’s Garden Center, which she says is “awesome,” noting that there are many different types of plants for sale in Missouri that she never saw in Tucson. Additionally, she gushes about Vintage Hill, which she says is a “great little spot.” In fact, Vintage Hill carries a soil Becca produced in collaboration with a soil company in Tucson.

Though her plant collection is large, Becca concedes that she does have a favorite. “Monstera deliciosa. All of the varieties, green or variegated. I think it is so beautiful, and every time a new leaf comes out on that plant, I get so excited because you just don’t know what it is going to come out like.”

She admits that she paid $250 for an Albo monstera — a plant with four leaves. To put this in perspective, the Monstera deliciosa albo borsigiana is a relatively rare and extremely popular plant in the house plant community, with cuttings selling for upwards of $200. An established plant, like the one Becca purchased, sells online for $1,500 or more.

“I’m very proud of that,” Becca says, “I waited a long time to find a good price.”

With the Becca De La Plants YouTube channel taking off, big things are on the horizon. She just released her first book about houseplant care, entitled Houseplants for Beginners, which is available on Amazon. “It’s meant to be the essential guide to houseplant care,” she says.

As she celebrates the release of her book, she’s also embracing her new home. “I’m excited to be here and explore and enjoy a different kind of nature than I know.”

Becca’s new book, Houseplants for Beginners, is available on Amazon. The book is an essential guide for new houseplant owners, but is sure to be a joy for seasoned indoor gardeners, too.