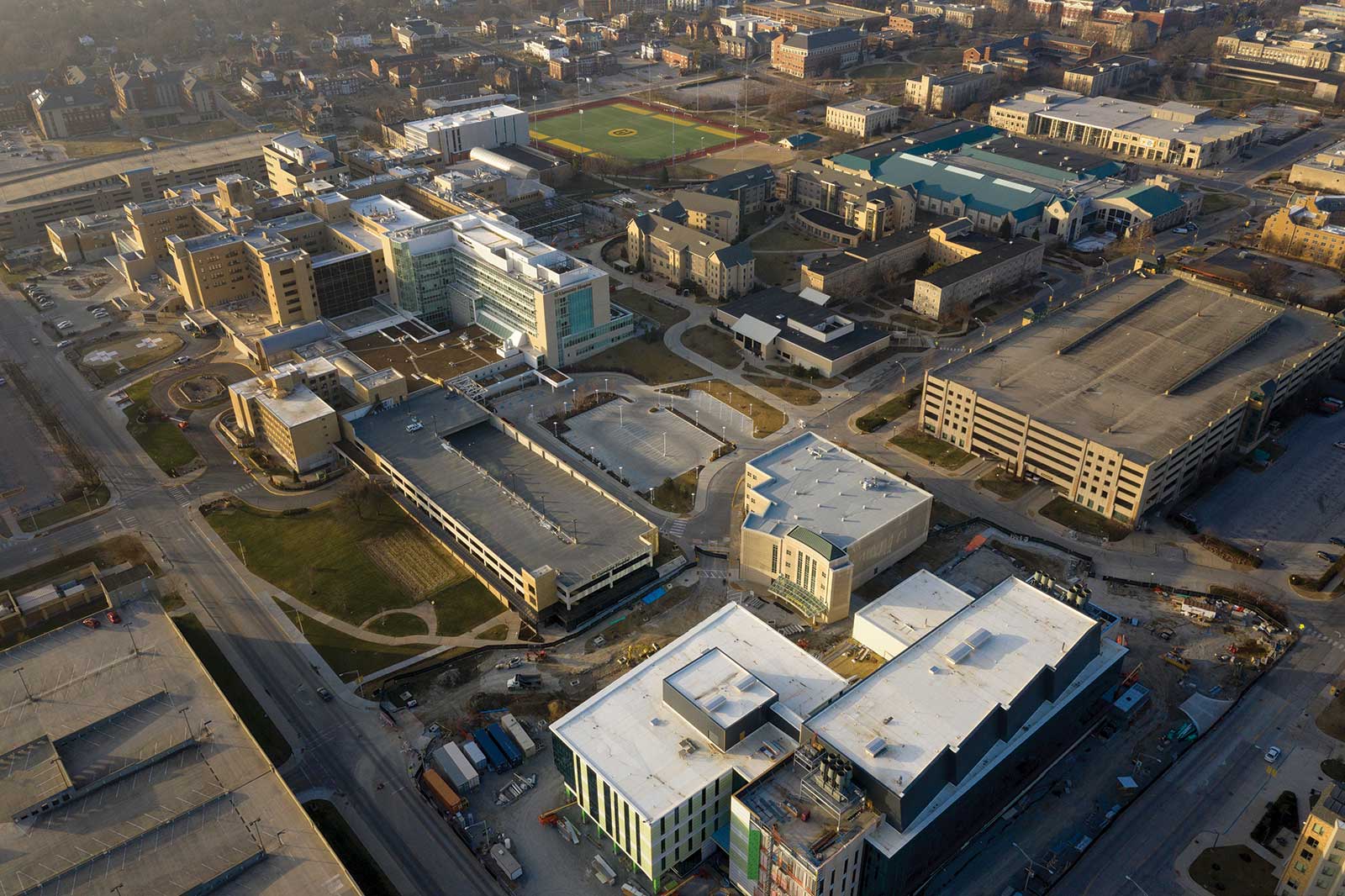 MU Health Care makes a major investment in the future of MU Women’s and Children’s Hospital and in itself.

The mission of MU Health Care is simply stated: To save and improve lives. Achieving that straightforward goal requires careful operation and constant maintenance of multiple mechanisms — health care never stands still. New and improved technology, advances in research, and the changing health care needs of the community make for constantly moving targets.

Imagine several spinning circles of different sizes, overlapping at times like a Venn diagram. For MU Health Care, one of those circles is the MU Women’s and Children’s Hospital, and it’s about to spin its way back to the university’s main medical campus. After operating for more than a decade in what began as Columbia Regional Hospital on Keene Street, Women’s and Children’s Hospital will return to a shining new pavilion adjacent to University Hospital and Ellis Fischel Cancer Treatment Center.

“We’re 100% committed to Women’s and Children’s Hospital,” Jonathan says. “It’s a jewel in central Missouri to have these services right here and a big part in what makes MU Health Care shine.”

Jonathan says the move was spurred in part by the need to invest $50 million in the current hospital facility just for maintenance. The university purchased the building in 1999 and opened the dedicated women’s and children’s facility in 2010.

“The building has served the university well for more than 20 years,” Jonathan says. “But $50 million is a lot to just keep things running as they have been without adding space, technology, or services.”

The Right Move at the Time

Dr. David Gozal chairs the Department of Child Health at MU Health Care. He says that, although the opening of Women’s and Children’s Hospital on Keene Street was before he started working at the MU Health Care, he thinks the move was necessary at the time: It created a separate identity for the women’s and children’s services at a time when they were lost in the larger University Hospital.

“Separating children’s services from the hospital on the main campus probably helped consolidate the favorable reputation for Women’s and Children’s Hospital,” David says. “Now, we get to enjoy and continue working on that reputation, but we have missed not being in touch with other colleagues at MU Health and have also missed the opportunities for synergistic interactions in academic medicine, which is inherently interdisciplinary and transdisciplinary.”

David jokingly says that, of course, pediatricians are the best doctors because “we tend to spoil our patients.” And he is confident the new pavilion will provide the environment they need to continue doing so.

The cost for the Women’s and Children’s Hospital project is $232 million, making it the largest single investment in the history of the University. While that’s a lot of money, the price tag is significantly less than similar undertakings at other university health systems. Hospital projects at Indiana University, the University of Nebraska, and Ohio State University range from $1.2 billion to $1.8 billion.

The new patient tower that will house Women’s and Children’s Hospital will be constructed on the east side of the existing University Hospital, with floors adjoining one another. A raised glass-and-steel pedestrian walkway will curve from the southeast corner of the new tower and connect with the University Physicians Medical Building. Those physical connections, plus the proximity to the NextGen Precision Health Institute and the MU School of Medicine, provide efficiencies and convenience for patient care, academic medicine, and research.

“To help drive down the cost of health care and elevate academic medicine, we need to become more efficient,” Jonathan says.

Moving Women’s and Children’s back to campus will accomplish those goals — MU Health Care will no longer need to duplicate services like radiology and digital imaging, among others.

He also says the move will vastly improve physician recruitment in the pediatric subspecialty. Specialties must be staffed 24 hours a day, seven days a week, 365 days a year. That means MU Health Care would need to recruit more pediatric neurosurgeons, for example, just to fill the staffing calendar. With Women’s and Children’s sharing space on campus with University Hospital, adult neurosurgeons trained to work with pediatric patients can fill the void. That creates better coverage, which means better patient care.

“When we come back to the main campus, we will bring our identity while having the opportunity to engage in real interdisciplinary medicine,” David says. “The transition from child to adult care will be seamless, and collaboration among disciplines will make for better medicine.”

The Women’s and Children’s Hospital project comprises four phases: Phase one, spanning the next 12 months, will optimize 80 to 90 beds at University Hospital and move the pediatric inpatient beds there in the fall of 2021. During phase two, they’ll complete the planning and construction of the new tower on the main campus with a targeted completion date of June 2024. Phase three is to move the remaining women’s services, including obstetrics, neonatal, and ancillary services, to the main campus in the summer of 2024. And phase four is to utilize the extra space of the new tower as needed to expand and improve health care services.

“Like kids, during the transition, we’re all going to have to get used to sharing our room with someone else and be considerate with our adult and pediatric colleagues while doing so,” says David. “Space will be tight for a while in this process, creating tighter quarters for everyone. But the price to pay is worth it.”

David describes this project as the “first of a reaction chain that should lead MU Health to unparalleled heights.” As older facilities like University Hospital require updating, there will be a new facility with space to care for patients during improvements. And as the patient population demands change over time, there will be space flexible enough for MU Health Care to expand, contract, and respond.

About 30% of the square footage of the new tower will be “shelled” for future growth. “Shelled,” according to Jonathan, is like building a new house but not finishing the basement right away so you can finish it as your needs change and grow. In total, 75% of the new tower will be dedicated to patient services, with the remaining 25% devoted to lobby areas and mechanical systems. Eventually, Jonathan says, every square foot will be utilized to deliver high-quality patient care.

The reintegration of Women’s and Children’s Hospital to the main campus has been in the planning stages for a while, but Jonathan says the COVID-19 pandemic has accelerated the timeline. The pandemic has also accelerated the growth of telehealth, spurring a 15% growth in delivering ancillary services via telemedicine. The telehealth circle is growing as it spins. According to Jonathan, changes such as these illustrate the need for MU Health Care to be nimble. Delivering care on a single campus makes those pivots much, much easier.

Jonathan says the MU Health Care family is united behind the project because it benefits patients by optimizing infrastructure and providing economies of scale.

“Everyone has a vested interest in MU Health Care [as a whole] rather than just their ‘side’ of things,” David says. “We have to maximize and optimize for the community and also thrive as an academic medical center if we want to lead in health care.”

This project is not just an investment in Women’s and Children’s Hospital,” David says. “This is MU Health Care investing in MU Health Care while prioritizing the children in our communities. And children, after all, are our future.”