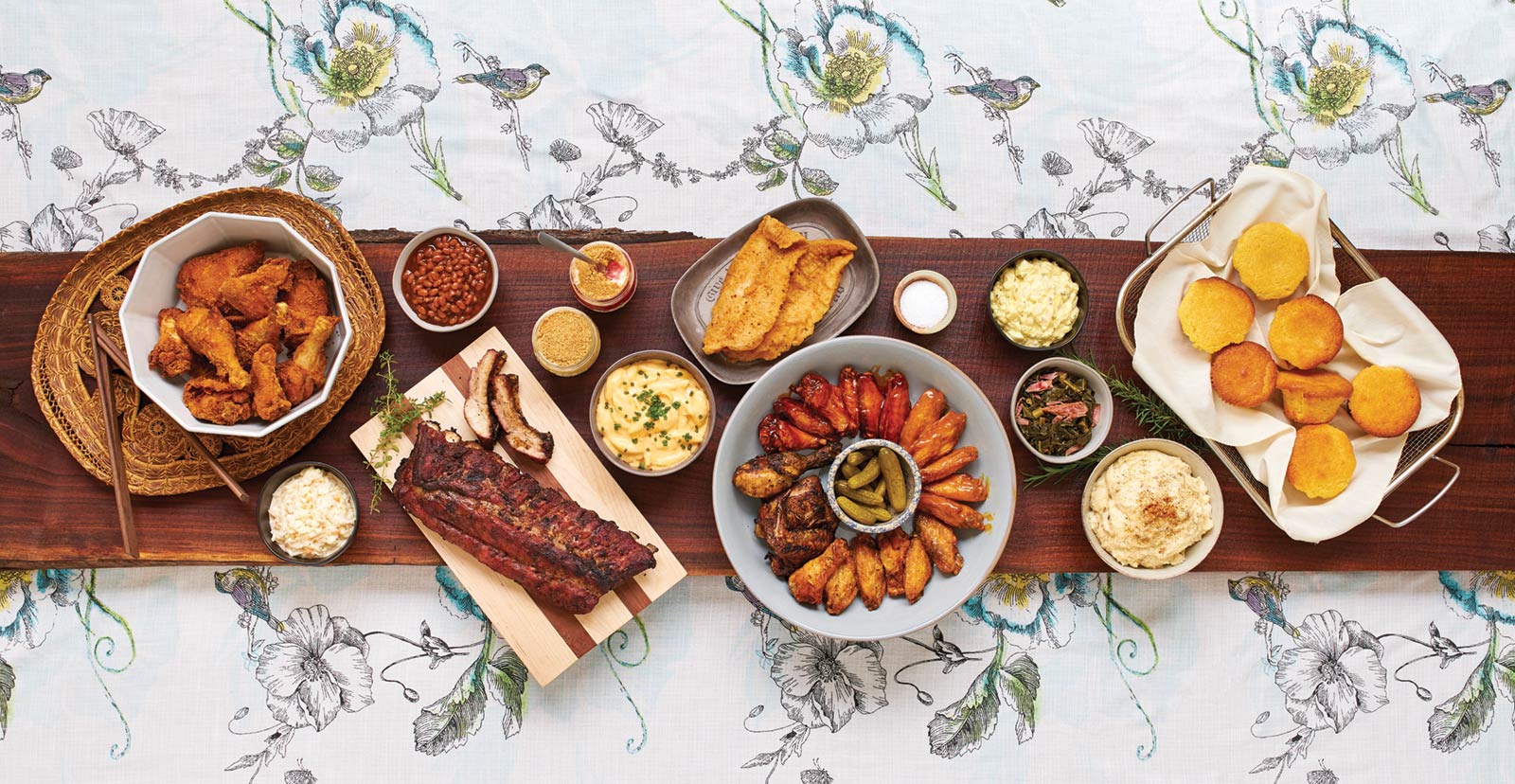 Your new favorite restaurant is a family-run soul food operation running out of the back room at Rose Music Hall.

On occasion, when meeting someone for the first time, there is an immediate level of comfort and authenticity that makes it seem like you’ve always been acquainted. For me, the affable, enveloping handshake of Gerald Nathan Sr. certainly felt like that of an old friend rather than someone I only just met.

Sitting in the courtyard of Rose Music Hall, whose kitchen is the new home to South Florida Style Chicken and Ribs, proprietor and chef Gerald Nathan Sr. shared the secrets of his success. Well, at least some of them.

To raise money for the football team, Gerald, with the help of his family, began cooking and selling his flavorful, home-cooked fare. The goal was to raise enough money so that children who couldn’t afford registration and equipment costs could play for free. Growing up in a close, supportive family, Gerald Sr. wanted to provide that same uplifting atmosphere to the kids whose family support was lacking or non-existent.

Gratefully, Gerald shares, “The Nathan family has had my back since day one. To raise money for these kids, sometimes we’d get to the football field before dawn and wouldn’t leave until after dark.” He remembers once when, years after playing in the program, one of the kids from his football team sent Gerald $400 in cash to try to repay what the Nathans had done for him so long ago. Gerald was pleasantly surprised and deeply touched by the impact he and his family had made.

In 2014, when Gerald Jr. was in high school, the Nathan family moved to Charlotte, North Carolina, to help boost his football career. Gerald told his son, “In order to measure yourself, you got to play against the best.” The move paid off. Upon graduation, Gerald Jr. had 21 scholarship offers to choose from.

It was during his time in Charlotte that Gerald formulated his secret seasoning that gives the distinctively delicious flavor to almost everything he cooks. Ironically, Gerald divulges that he has never actually liked the taste of pork, and his seasoning came from seeking a way to make the meat more palatable. After mixing a variety of spices together in varying amounts, he landed on a ratio that worked. This was the invention of his South Florida-style seasoning. “It cuts the pork in the pork,” Gerald describes.

Gerald Jr. had already committed to Colorado State when, family in tow, he made a visit to Columbia and subsequently fell in love with the Mizzou coaches and team and the hospitable town. Promising to move wherever Gerald Jr. decided to play football, Gerald Sr. was pleased when he ultimately opted for the Mizzou Tigers. “Thank God he chose this place because it is a hidden jewel that a lot of folks don’t know anything about,” Gerald says. “There’s a lot of good going on here.”

After moving to Columbia and becoming food safety certified and licensed with the help of the local health inspector, the Nathans began setting up their food tent in various Columbia locations including Macadoodles, Cooper’s Landing, and Veterans United Home Loans. The soul food menu including southern staples such as ribs, lamb, fried fish and chicken, creamy mac ’n’ cheese, and tangy collard greens quickly gained a following.

As with many tight-knit families, the Nathans have stayed close through all the changes. Gerald attributes his kitchen prowess to his mother, Marie Talbert. “Mom is the one who got our taste buds going. She made food really blessed for people,” he says. He remembers countless holidays when folks piled in their house to eat her cooking. He chuckles as he discloses, “She’s the big boss — the big chief. Even today, her food is better than mine.”

Due to a high standard regarding the made-from-scratch food he serves, Gerald says that he is the sole preparer of all the menu items. Taking little credit, though, he says, “My family is the reason for my success.” With Kim at the register, son Jeremiah on the fryers, and his daughters, Brandi, Bridgette, and Bethany, helping as needed, Gerald stands by his motto “try it before you buy it,” offering free tastes to those who stop by, resulting in scores of satisfied customers.

In June 2020, Gerald was approached by Matt Gerding and Scott Leslie, owners of Rose Music Hall, who invited South Florida Style Chicken and Ribs to move into their vacant kitchen space. Today, the Nathans are currently serving their comfort food menu to concert-goers in addition to those stopping by the tent at their usual Columbia locations. Gerald’s secret recipe seasoning is also available to purchase at Rose Music Hall, or by contacting Gerald directly.

Not surprisingly, Gerald has big ideas for the future of South Florida Style Chicken and Ribs. He is currently expanding his food empire to It’s A Wrap Sandwich Shop. The addition will offer Cuban, chicken salad, and seafood salad sandwiches, as well as a variety of wraps.

He also plans to acclimate Columbia’s palate to souse — a spicy, vinegary stew made with pig ears, tail feet, and hog maw (pig stomach). “It’s a Florida thing. But they’re going to love it,” he says.

Columbia welcomed Gerald Nathan Sr.’s distinctively flavorful, home-style cooking with open arms, and South Florida Style Chicken and Ribs has not only found a home, but flourished despite the pandemic that has negatively affected so many local eateries. Gerald attributes his success to his family and God. As he recounts his story, he pauses to reflect. “That’s crazy,” he says, then corrects himself and smiles. “No, that’s blessed.”

Directions:
Boil noodles and drain. Blend milk and eggs together. Add shredded cheese and cream cheese to milk/egg mixture and then add to noodles. Put in a large pan and bake 15 minutes on 300-degrees until bubbly.