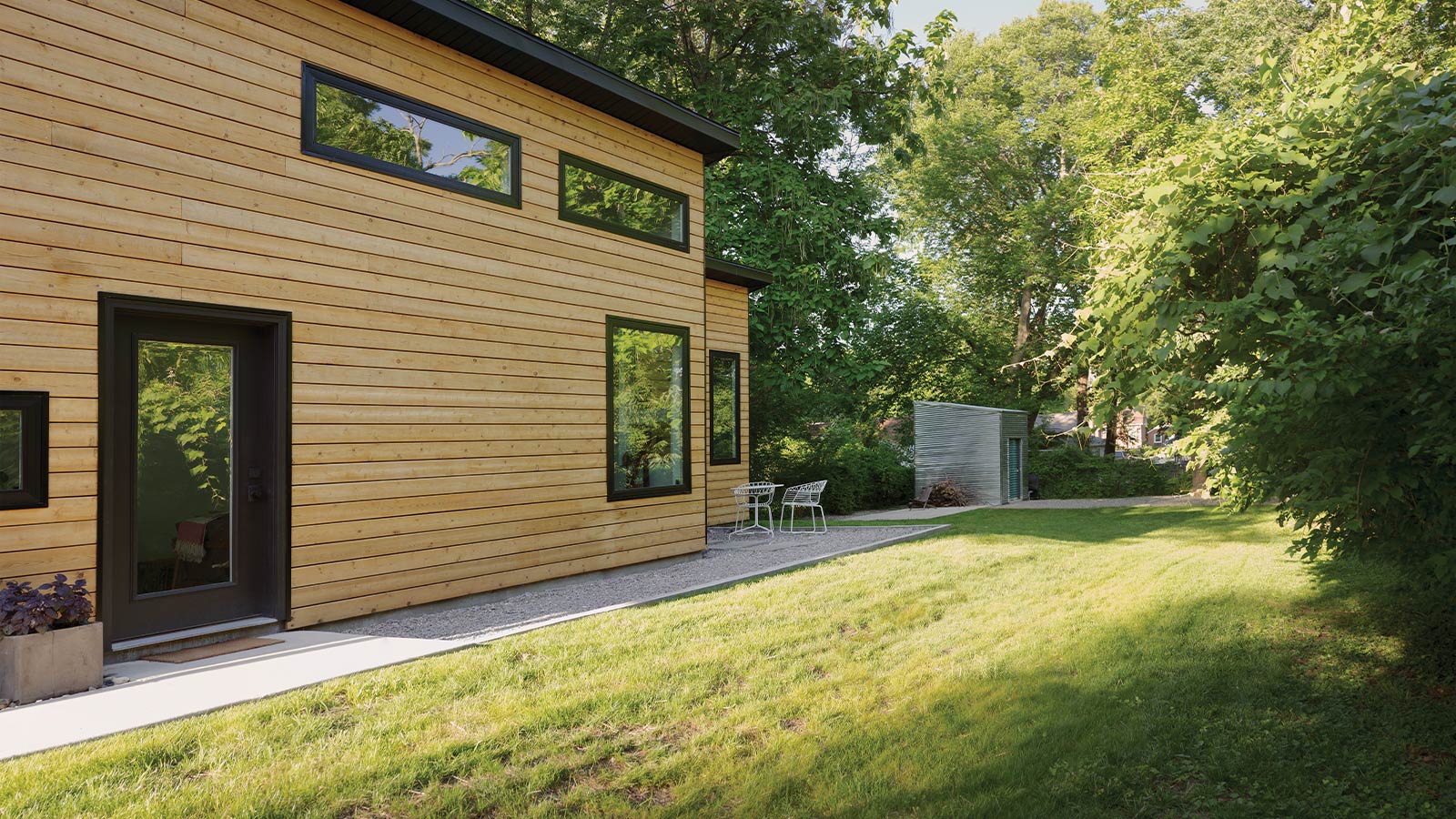 This tiny home in the heart of Columbia was built with efficiency and style in mind.

When a Columbia couple approached Brian Morgan, a local architect, about building their dream home on a small plot of land, they had three key elements in mind: compactness, efficiency, and style.

Brian partnered with Jake Bruton of Aarow Building to turn this dream home into a reality.

The plot of land the couple had purchased is located between the streets of Ash and Worley and had one major challenge: It was located on a utility easement, meaning, as Brian describes, there are “utility pipes and lines buried underground on the piece of property.”

This impacted both the structural design and efficiency of the house from the beginning. “It starts by limiting where we can build. The general shape of the house was defined for us. The width of the house is within six inches of the full useable area,” says Brian.

The finished width measures just 22 and a half feet wide. Limited to a long and narrow rectangular shape, the house could only be 23 feet wide maximum in order to not conflict with the utility lines. The square footage of the house was also limited, totaling in at 1,036 square feet.

Despite the small size, the house includes three bedrooms, two bathrooms, a kitchen, a dining room, and a living room. The clients originally had the third bedroom designed as an adaptable space which they could use as a studio for their art or an Airbnb for extra income.

Out of all the features that make this home stand out, efficiency is at the top of the list. Brian made sure that when designing the house, every aspect was used in a deliberate way. “It’s efficient for using square footage. It’s efficient for cost of construction. It’s efficient with everything we could explore with this house,” says Brian.

Before building the house, Brian and his team created a 3D model to test how sunlight would enter the house. By adjusting the light entering the house, it can lower the cost related to heating and cooling and electric. In order to maximize the amount of natural light, Brian placed multiple windows on the south side of the house.

Partnering with Jake on this venture was important to Brian because Aarow Building focuses on building energy efficient, durable, and architecturally significant homes.
Jake explains that, when building the home, the size made the largest efficiency impact from the start.

“The house is built with energy efficiency in mind, but its tiny size also contributes to efficiency. It doesn’t cost that much to heat and cool a house that size. It also didn’t get an expensive insulation package because our air sealing package was incredible,” he says.

Air sealing focuses on reducing the amount of air that leaks in and out of a house. Doing this can help regulate the temperature of the house, keeping heating and cooling costs down and providing better health and comfort.

Aside from energy efficiency, the house is also cost-efficient. From the start, the homeowners had a tight budget set, and between Brian and Jake, the budget was kept. The first factor that impacted the budget was the size of the house.

As a way to keep costs down, some materials were used in unique ways to add a modern style. Brian worked with Andy Werth, at Stickman Woodworks, to use plywood for the cabinets and baseboards. On the baseboards, Andy’s team added a chamfered edge to the top of the plywood to expose texture and add a minor detail.

Brian also chose to use a combination of metal and wood for the outside of the house. Three sides are wrapped in an affordable black metal that is typically used for agricultural purposes. The south side, which is the front of the house and opens to the yard, is covered in a more expensive western red cedar rainscreen. The pairing adds both warmth and simplicity with a modern twist. This combination is the perfect cost-effective way to have high-end designs.

“A little bit of deliberate and attentive construction takes something from lowbrow to high design,” says Jake.

While designing the home, Brian looked to other houses in the neighborhood.
“That neighborhood has a lot of older homes. It is a very established part of town. Our thought was, how can we play with some of the context, some of the existing shapes of the homes already there, and add a modern twist to it?” he says.

In order to add this twist to the outside of the home, Brian designed an overhang on the south side that creates an image of a front porch. The idea is for the homeowners to also add a fence by the corner of the house. This would add to the image of a traditional home with a modern flair.

As for the location itself, it’s an area of town both Brian and Jake would like to complete more work in.

“I think that area is unappreciated for its accessibility to amenities. For the cultural aspects of Columbia, you’re going to be hard-pressed to find neighborhoods that are closer than that,” says Jake.

Check out another one of Brian’s and Jake’s projects.