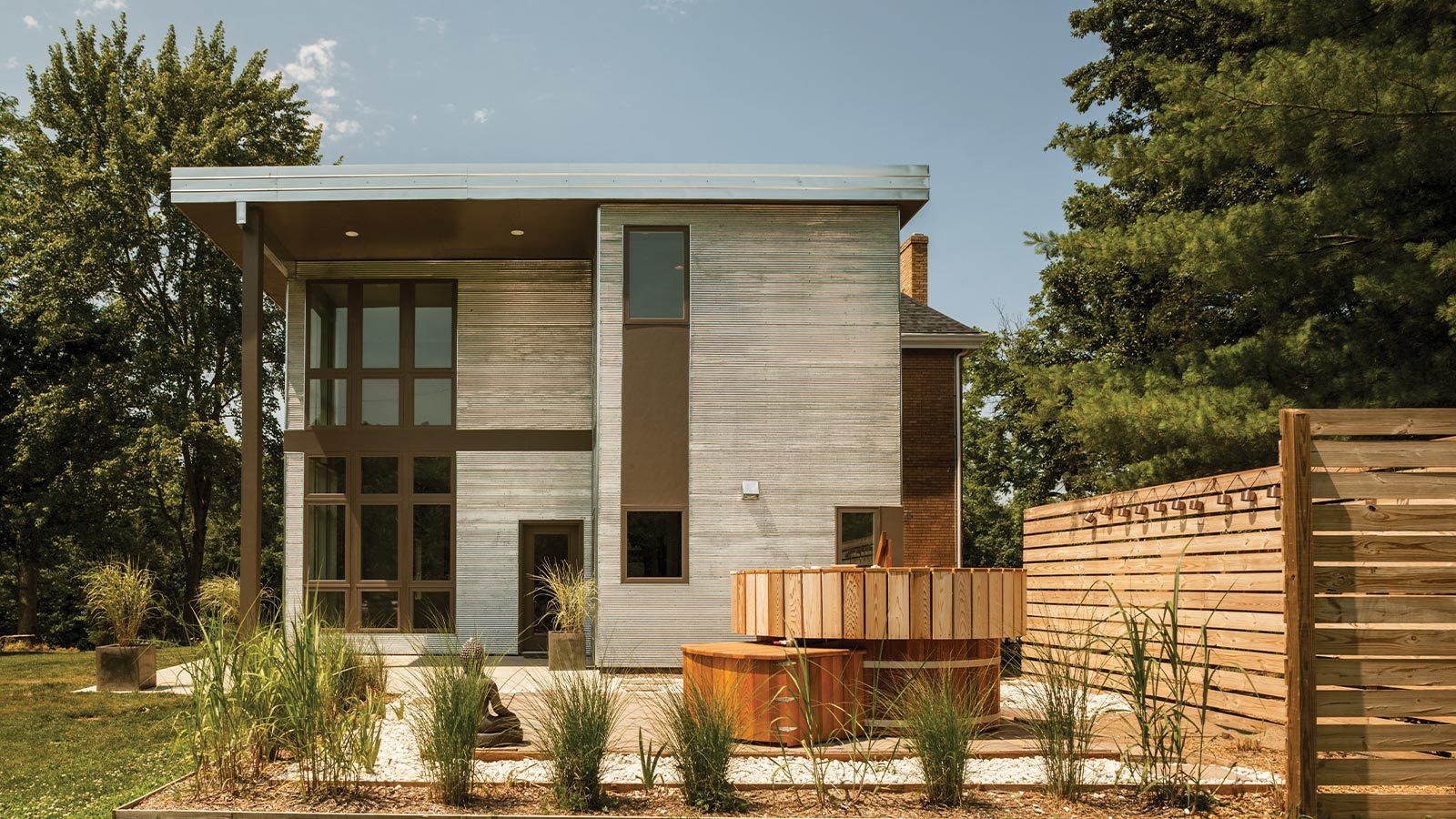 Architect Brian Morgan gleans from the past to design homes for the future.

Sometimes we find our calling where we least expect it — like at a friend’s lawn care and landscaping company in Springfield.

After working for two years in psychology, Brian Morgan started working in landscaping with his friend. That’s where he discovered his true passion: architecture. Before he became an architect, he didn’t even see himself as artistically inclined. Now he can’t imagine himself doing anything else.

“We were trying to design landscape projects for people, and I realized I needed more education to design something,” Brian Morgan, principal at Brian Morgan Architects LLC, says.

He already had a Bachelor of Arts in psychology from Westminster College, but he decided to enroll in the architecture program at Drury University. He worked on his degree there for three years before relocating to Seattle when his wife received a promotion that required them to move across the country. There, he received his master’s in architecture at the University of Washington-Seattle.

After six years, the couple ended up in Columbia, where they’ve been since 2010. Brian received his architecture license and has been working at his own firm for eight years fulfilling client’s dreams along with his own. He and his team work on single-family residential homes.

“All of them have their own individual challenges that we’re trying to solve,” Brian says. “So each project is unique, and I think just coming up with a workable solution is a lot of fun.”

The Gilman Residence
The Gilman residence was a 2015 project in Moberly. The home has a rich history attached to it and it offered its own unique challenges throughout the process of revamping the classic space.

Brian worked with the clients eight months in advance before construction began. “They wanted clean, they wanted sleek, and they wanted something that was much more modern living than what the old house was,” Brian says.

The two-story masonry front of the home was an 1863 addition built by a Scottish man named James Sandison, who was the owner of the original Moberly Brick Plant. The original home, which was only visible from the back of the house, was much older.

Unfortunately, the small original home wasn’t very efficient. It had deteriorated and suffered from foundation issues, so Brian and his team decided it needed to be completely removed. Luckily, they were able to save and repurpose the more than 200-year-old wood rafters from the original home to keep a piece of the rich history. They used the rafters to create sills, shelves, and a floating shelf vanity for the master bathroom.

While Brian worked to create something that looked fresher, he planned to keep some of the older characteristics of the home, too.

“We knew that we could never match the exact character of the original house. It’s from 1863 — you can’t do something new that looks old,” Brian says. “There was always going to be this relationship between what we did today and what was original, or at least from the 1863 addition, so we decided to go completely in the opposite direction.”

When construction began with Aarow Building, a brand new — and efficient — addition was added on to the back of the two-story 1863 home. “We decided with the addition that we really wanted to change the perception of the space inside,” Brian says. The sleek and modern add-on completely juxtaposed the classic traditional look that the house originally had. “We had clients that were very open-minded about this,” Brian says.

They were able to beautifully blend the classic look with the new and contemporary design to create a stunning and unique home in Moberly. The new addition has brand new features while the old addition still has characteristics from the past. The dark trim in the house was kept the same, along with the exterior of the 1863 addition and brick features inside of the home.

“We also took a lot of steps with the exterior shell of the new space to make it as efficient as possible,” Brian says. They went to a flat membrane roof and corrugated metal barn siding for the new addition. They also used plywood, a cheaper but still beautiful option, for the wood flooring in the master bedroom. “We chose a lot of materials that contrasted the original, but were also very affordable,” Brian says.

An array of new windows was added to let natural light into the two-story open living room space that features a fireplace. A wooden Japanese soaking tub is now in the backyard, and a large master suite that overlooks the living area below was created on the upper level of the home. “They wanted some of the more modern conveniences,” Brian says.

In the end, they added about 950 square feet of finished space.

“They loved everything about the design, which is our goal,” Brian says. “That’s what our number one goal of every project is.”

An Architect’s Role
When you think about what an architect does on a day-to-day basis, what comes to mind?

The process of working on a home starts early. Sometimes it begins with looking at an empty lot where a house will be in the future, while other times — like with the Gilman residence — it starts with looking at an already built house and deciding what changes to make.

Brian works one-on-one with clients to find out exactly what they want in their home and helps them work through the process of figuring out what will fit their budget. He focuses on finding out where a family wants to spend most of their time in the home so they can make that space as comfortable as possible, and they tweak each project based on the client’s routine.

“That’s the joy of what we do. Trying to learn a lot about our clients — who they are, how they live, and what they want in a home,” Brian says.

Each project is different for Brian and his team. “Spouses will come in here and a lot of times they have very different ideas,” Brian says. “We get in there to find that middle ground so they both love what it comes out to.”

His career now isn’t in psychology, but it’s easy to see how his background in the subject helps him navigate through his projects. Architecture isn’t where Brian started out, but now he doesn’t see himself in any other profession.

“That’s the important thing about a career. What are you going to wake up every day and love doing? This is it for me,” he says.