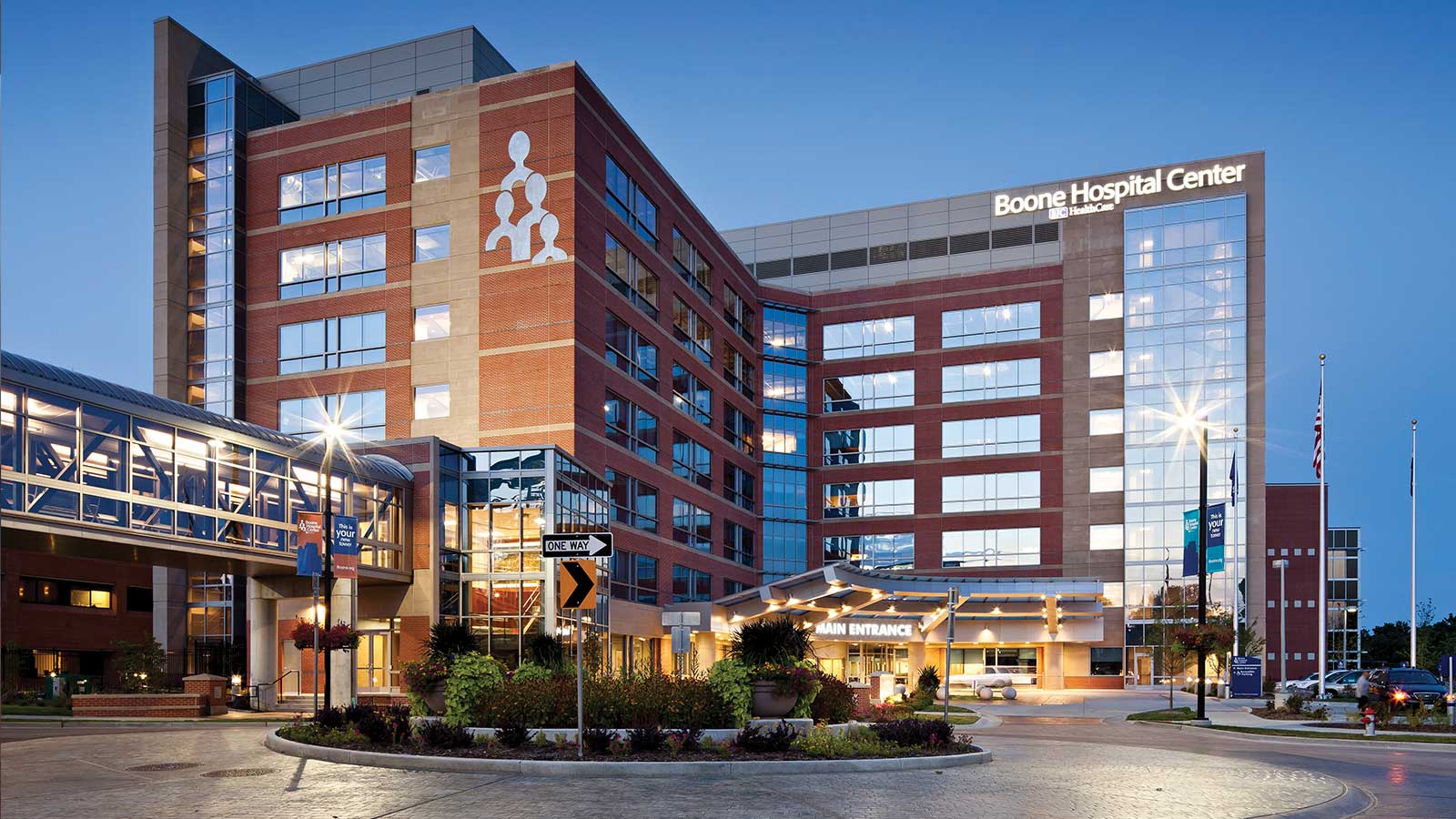 With Boone Hospital Center’s latest five-year lease with BJC HealthCare coming to a close at the end of 2020, the hospital’s trustees had three options in front of them: sign on with BJC for another lease term, continuing a relationship that goes back three decades; search for another health care system with which to partner; or take Boone Hospital independent.

In the end, forging a new path was the most appealing option.

“Part of what the trustees were considering was would going independent provide a better opportunity to focus on Mid-Missouri strategically?” says Boone Hospital President Jim Sinek. “Would it allow us a little more local control over decisions and strategies that are predominantly for the citizens of Boone County and the 28 counties around us? BJC was supportive of that. They felt like if the trustees came up with a different solution to addressing the health care needs in Mid-Missouri, they were going to be supportive of that.” By January 1, 2021, the transition from Boone Hospital as a part of BJC HealthCare to an entity of its own must be completed. That involves months of work shoring up all of the logistical hurdles inherent in the change in ownership.

As an example, all of the Boone Hospital employees are currently BJC employees. They need to be reclassified, reorganized, and re-enrolled in benefits, such as health plans, that used to be under the purview of BJC.

And while this is a time of many changes for Boone Hospital, it’s also a time of opportunity. It’s a time to explore, innovate, and set up partnerships for the future, such as their new collaboration announced in January between Boone Hospital and Stephens College to develop a new nursing program.

It’s a time for Boone Hospital to dictate its own way forward.

“We’ve been taking care of patients for 100 years. We’re going to continue to provide excellent care to the patients that are here,” says Monica Smith, vice president of patient care services and ancillary operations and chief nursing officer. “We just continue to do the great things that we do every day.”

The Infrastructure of Change
To accomplish the prodigious task of disentangling itself from BJC HealthCare, Boone Hospital is breaking the process down into more manageable segments.

For the past eight months, 21 different teams have been working to inventory everything that needs to be included in the switchover in order for Boone Hospital to continue providing its high level of service without BJC’s structure and resources. Each team has two co-leads — one a locally based Boone Hospital worker and one a BJC shared services employee.

“Those teams have moved into task and action plans to determine, now that we’ve recognized all the things that need to be transitioned over, how are we going to accomplish that?” Jim says. “What resources are we going to need in order to be able to perform that service here for Boone Hospital instead of relying on BJC? That may include the addition of new employees with those types of skillsets and new applications and systems that we need to produce data for us, or it might include having contracts with outside vendors that can help provide some of those services.”

Each of these teams brings its findings and proposals to the local transitional operational team for approval and implementation.

“Many of those resources are going to have to come on board before January 1, 2021, to make sure things are prepared and that we’re ready to go at the switchover date,” Jim says.

Boone Hospital and its trustees will own the health complex facilities, furniture, equipment, technological hardware, and assets — in other words, they’ll need to account for the physical infrastructure that BJC has been leasing in order to provide health care for the past 30 years. Jim says to think of the arrangement as you would a furnished apartment. When your lease ends, the landlord keeps everything that came with the apartment in the first place.

The biggest hurdle, Jim says, has been preparing a new IT strategy for the switchover from BJC. Boone Hospital has around 160 different computer applications that support different services at the hospital, as well as an electronic medical records system that serves as the patient’s medical chart.

All of that needs to migrate to a new system. Jim says around 40 employees are working on the technology switchover alone.

“The trustees are looking at a different electronic medical record system, which means you have to design, build, test, and run the new and old systems side-by-side over a period of time before you do the switchover,” Jim says. “We’re planning on setting up a data room where we’d store information and be able to support all those 160 applications plus the electronic medical records system. It’s significantly complicated.”

Some other challenges include replacing efficiencies that being part of a major health system afforded Boone Hospital. As part of BJC, Boone Hospital was able to enjoy bulk pricing for supplies that vendors offered, for example. Now, Boone Hospital is negotiating and building relationships on its own behalf.

Boone Hospital also had payment rates with health insurance companies negotiated through BJC. Now, it has to rework its own contracts with 60 managed care providers.

Jim says Boone Hospital employees have had opportunities to participate in open forums with the trustees about what the move to independence means for them. Some of the answers they seek are still to be determined.

“The team here at Boone Hospital just keeps providing excellent care,” Jim says. “They have questions and there is some angst about what the benefit plan will look like, what will and won’t change. That’s natural. We have really compassionate, dedicated, loyal, patient care providers. They do their thing, and priority one is to the patient. They have not taken their eye off the ball at all.”

New Horizons
Both Jim and Monica are thankful for the support and benefits afforded to Boone Hospital through its affiliation with BJC. They also recognize that, as a 14-hospital system based in St. Louis, BJC had far more on its plate than just Boone Hospital.

“It’s like having multiple children,” Monica says. “When you do, you have to make sure that everything is fair amongst them. A single child, you can make decisions for them without impacting other people. The seat of decision-making may come a little bit more easily with an independent hospital.”

Independence will give Boone Hospital and its trustees the chance to explore opportunities they were unable to under BJC, such as whether they want to pursue joint ownership ventures for certain services offered by physicians who don’t work for Boone Hospital.

Boone Hospital’s next big move could be emblematic of the sort of local partnerships that will define its future.

Stephens College has entered into a partnership with Boone Hospital for the creation of the college’s new Bachelor of Science in Nursing program. The idea started with conversations between Jim and Stephens President Dianne Lynch about a year and a half ago and was signed off on by the Stephens, Boone Hospital, and BJC trustees. The collaboration seeks to address the national nursing shortage in an innovative manner.

The Stephens’ program has been approved by the state board of nursing and is awaiting approval from the Higher Learning Commission before it can begin offering classes.

“Stephens is responsible for the academic program, which has been informed and inspired by conversations with our health care partner,” Dianne says. “We really bring to this partnership the academic quality, expertise, and delivery of the academic program. Boone Hospital brings the professional expertise and the physical environment of the hospital. We have a joint partnership that is unique, exciting, and creative and is a model for this kind of collaborative partnership between higher education and community organizations that will produce the workforce that our community needs.”

“I give enormous credit to the teams on the ground at both institutions,” Monica says. “Jim and I can sit down at a table and say, ‘Let’s do this,’ then we hand it off to the people who actually have to do it. All of the credit for the program and its execution belongs to them.”

Boone Hospital is building a simulation lab and classrooms to help house the program. Stephens would get priority use of the facilities, though they would also be open to students from the other schools with which Boone Hospital has relationships: Lincoln University, Columbia College, the MU Sinclair School of Nursing, Central Methodist University, Moberly Area Community College, and State Technical College of Missouri.

“Many of them are leaving the profession because they’re disillusioned with what nursing practice is really about. We’re trying to reduce those numbers by giving them a full view of what nursing is and how we can further support them,” Monica says. “It’s a great opportunity for both sides to be able to choose who they’re going to be working with in the future. One of the main things needed for a successful transition into nursing practice is making sure that people are connected.”

Jim says Boone Hospital continues to boast excellent clinical outcomes and strong financials even through this time of transition. Once 2021 hits, he feels as if the hospital will be poised to welcome in a prosperous new era.

“With the historical financial success Boone Hospital has had and the strong 2019 financials we’ve experienced, that’s given the trustees the confidence they need and us the ability to do things like the Stephens nursing program,” Jim says. “We take reasonable risks, support bold solutions, and make significant investments in Mid-Missouri.”

A WORD FROM THE BOARD

Dr. Jerry Kennett, Chair
“As we transition Boone Hospital to independent status in 2020, I look forward to working with smaller community hospitals and private physicians in central Missouri to develop a network of providers that will provide high quality, competitively priced health care that benefits both employers and patients.”

Jim Sinek, President
“I am looking forward to orchestrating, with the trustees and with the Boone team, a smooth and successful transition, and then retirement.

Randy Morrow, Vice Chair
“The trustees have three goals that will be the pillars of having a sustainable and successful Boone Hospital Center as we go into the future: continue to enhance the quality of care, increase access to health care, and improve productivity to help reduce costs. The trustees plan on building on the excellent foundation BJC HealthCare has provided to our community over the years.”

Jan Beckett, Secretary
“I am looking forward to having the flexibility to make health care decisions locally that benefit all of us in Boone County and Mid-Missouri.”

Greg Steinhoff, Treasurer
“I’m so impressed with the entire Boone Hospital family. The enthusiasm for ‘bringing back Boone’ is tremendous and I look forward to building on this great momentum.”