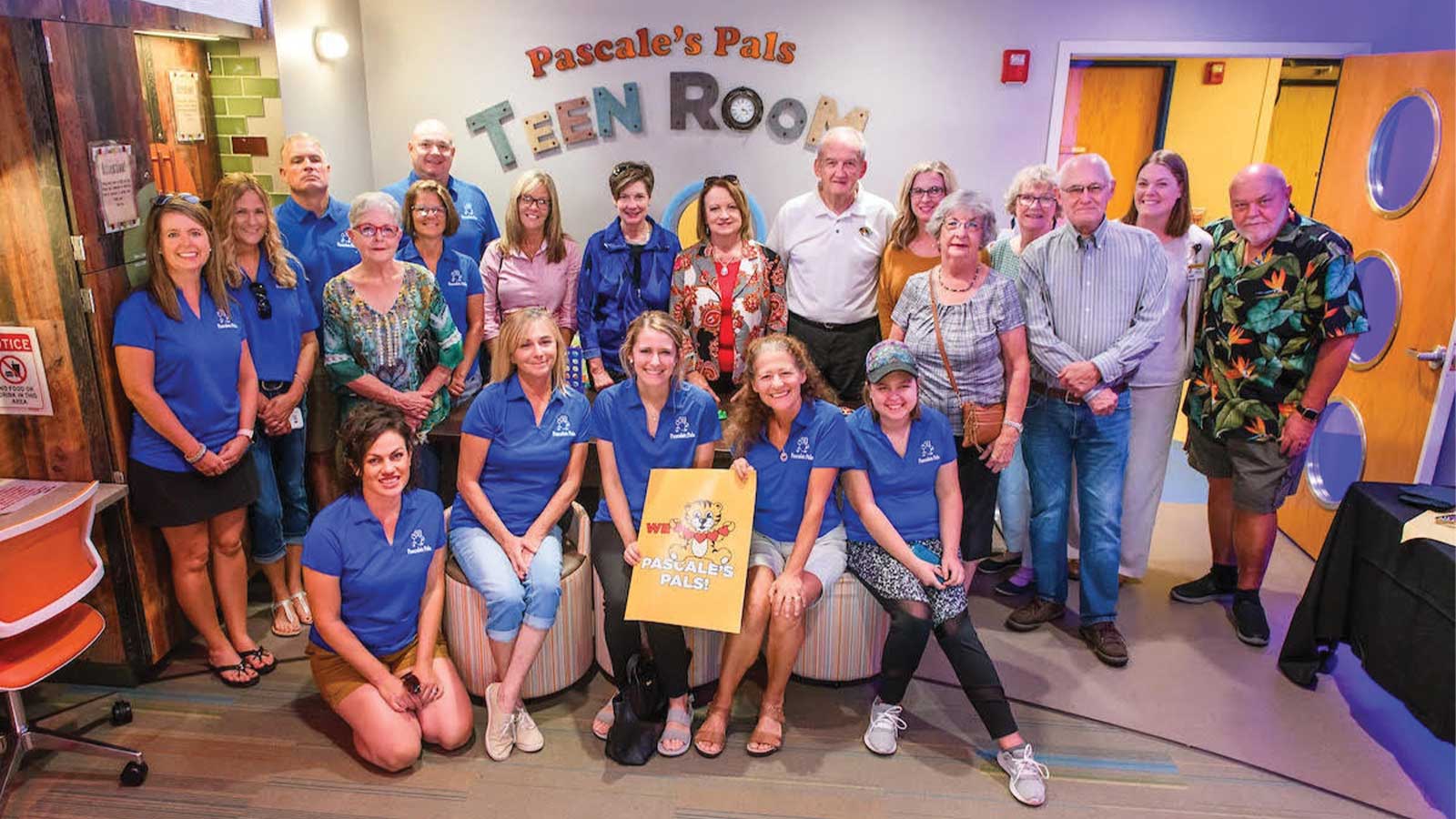 This year, Pascale’s Pals will celebrate their silver anniversary.

As they reflect on their 25-year history, the nonprofit can undoubtedly say that they’ve stayed true to their mission to uplift the burdens that plague families staying at MU’s Women’s and Children’s Hospital while their children go through cancer treatment or treatment for other life-threatening or chronic illnesses.

Pascale’s Pals’ work transcends a simple quenching of emotional and psychological needs during a child’s treatment journey. The nonprofit actively works to maintain a family’s stability through their many programs to ensure that, despite the taxing nature of life-threatening and chronic illness treatment, families still feel hopeful and loved.

The Name’s Meaning
Pascale White, the organization’s namesake, was diagnosed with acute lymphoblastic leukemia in 1995, the same year the nonprofit was founded. Immediately after her diagnosis, Pascale, who was not even two years old, was admitted to the children’s hospital, where she received intensive chemotherapy treatment. Her treatment ended in 1998, and soon after, she returned to a regular, healthy life.

The dawn of the new millennium, however, ushered in new problems as she relapsed from the same form of leukemia in June 2000 — the aftermath of which involved a five-month remission, a B-Pap treatment, more chemotherapy and radiation, and eventually an umbilical stem cell transplant. From then on, Pascale’s sicknesses forced her and her family to spend the majority of their time at the hospital.

Pascale’s journey towards complete health would not have been possible without the overwhelming support she and her family received from their friends and members of the community. Since July 2003, Pascale has made major strides and is now a healthy young woman and recent graduate from Columbia College, where she’s now begun pursuing a career in college admissions.

The Programs Offered
Pascale’s Pals’ programming focuses on easing the stress on the children and their parents while they are in the hospital as well as championing the patients’ successes and milestones. For example, they provide children who have been diagnosed with a life-threatening or chronic illness with a basket full of some of their favorite toys and gadgets to help make their time in the hospital easier.

“For a number of years now, we put together a wish basket for a child who is newly diagnosed. We have the parents fill out a form with things the child would like us to put in the basket,” says Monique White, who helps run the organization. She is also Pascale’s sister.

Pascale’s Pals partnered with occupational therapists at the Children’s Hospital to adapt motorized toys for children with motor-impairment disabilities. The SWITCHED program has provided over 260 toys for many children.

Pascale’s Pals also makes sure that the parents aren’t overlooked. Every week, parents can receive a 20-minute chair massage to help with stress relief.

And let’s not forget that Pascale’s Pals’ programming also helps to create long-lasting connections between the nonprofit, the children, and their families. They help build a bigger family that shares in the triumph of overcoming the struggles of life-threatening and chronic illness treatment.

When speaking of the organization’s work, Monique says, “It’s amazing just how many different aspects of the hospital we’re able to touch. Primarily, what we do the most for is the pediatric cancer patients, but we’ve been able to impact a huge part of the hospital on all different floors.”

Continuing the Work
Looking toward the future, Pascale’s Pals aims to keep touching the hearts of families and providing for their needs while their children receive treatment at the hospital.

“We really want to continue serving the Children’s Hospital in the biggest capacity we can,” says Monique. “We’ve always functioned based off of need, so when the need comes and the right person seems to be there at the right time, our programs take off.”

Monique shares a good example of this from the neonatal intensive care unit. “There’s a social worker there who is incredibly passionate about what she does,” she says. “She came to us with the idea of doing a beads program, which we had seen at different hospitals.”

The program, called Beads for Breath, is a result of a partnership between Pascale’s Pals and the aforementioned social worker and caters to children with cystic fibrosis. When children are enrolled in the program, they receive a strand of beads with their name and a personalized bag. For each procedure or treatment milestone the child reaches, they receive a unique bead to add to their strand, allowing the child and their family to commemorate the courage and strength they harnessed during their journey.

The culmination of Pascale’s Pals work over the past 25 years will be celebrated at an annual auction gala on March 13. The gala’s overall purpose is to fundraise the majority of the money needed to carry out the nonprofit’s yearly programming.
In Monique’s words, the gala will also be a heartfelt thank you for the volunteers that have been with Pascale’s Pals since the beginning and for the diligent support and service the organization has received from the community throughout the past quarter century.

Mission:
Pascale’s Pals Inc. is a local organization that supports the children and families staying at the Women & Children’s Hospital in Columbia, Missouri. Their mission is to provide happiness to the children in the hospital and to ease the burden on the families during this time. It is their belief that happiness and health go hand-in-hand.