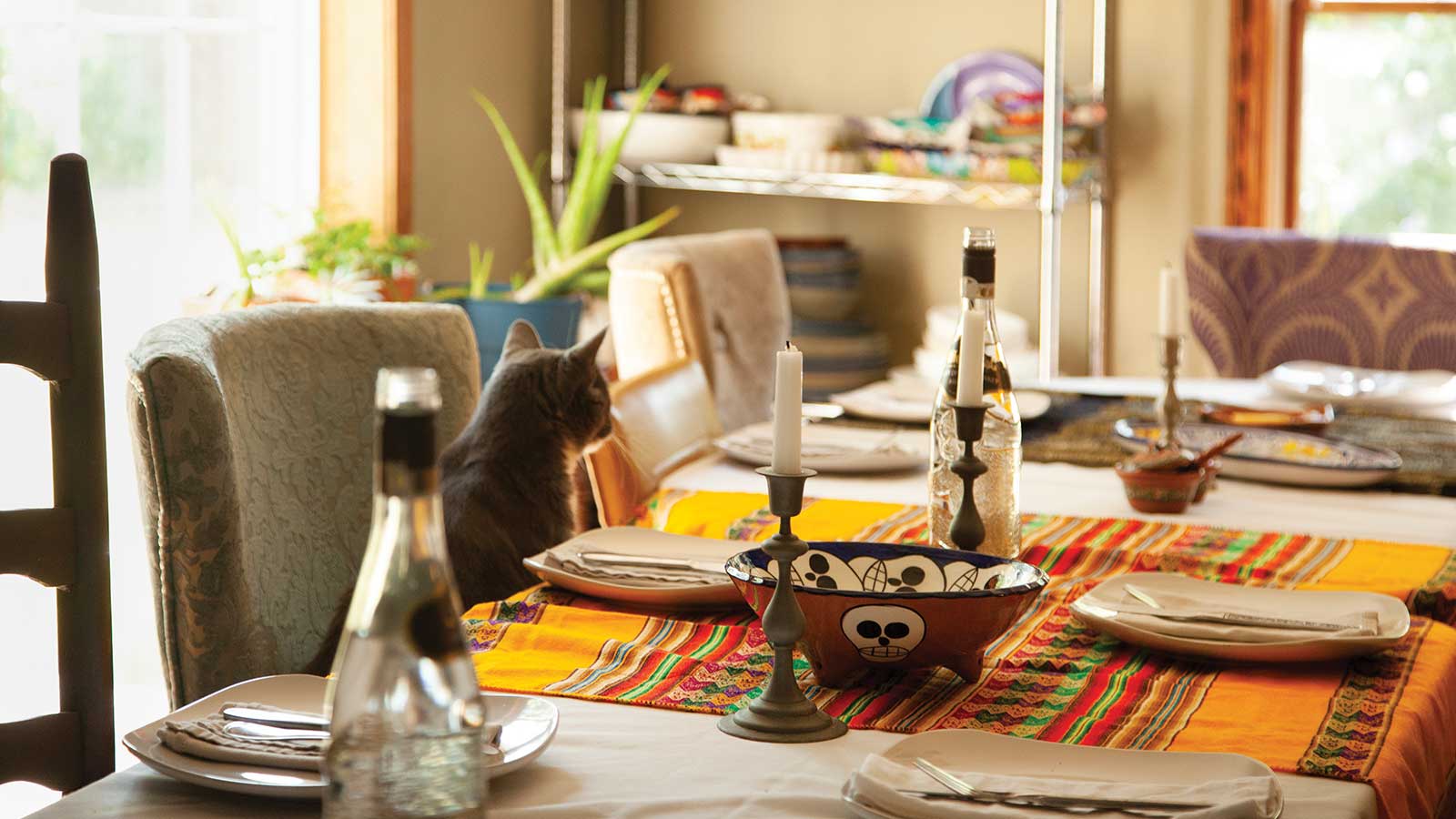 A look inside the home kitchens of Amanda Elliott, Shelly LaFata, and Gaby Weir Vera, three of Columbia’s prized chefs.

Chefs obsess over food. And that only makes sense; like any artist, they must immerse themselves in their craft. But after hours in the kitchen cooking for everyone but themselves, do they tire of their practice? How do chefs nourish their own appetites at home? We visited the home kitchens of three Columbia chefs to get an honest look — and taste — of what cooking at home means for them.

Amanda Elliott
Amanda is a chef at Peachtree Catering and recently opened Beet Box restaurant with Peachtree’s owner, Ben Hamrah. She is originally from Missouri, but spent much of her early career in New York City, where she launched her first catering and personal chef service, Rustic Supper. She moved back to the Midwest to raise her daughter close to family.

If it weren’t for her daughter, chef Amanda Elliott would survive mostly on cereal for supper. “Virna is the reason I cook the most now,” she says. “Before, I would just honestly eat deli sandwiches or cereal.”

It’s not that cooking feels like work, Amanda says, but as it does with most of us, the act of cooking dinner following a long workday seems daunting. “I can throw together a meal pretty quickly, but I don’t always have the appetite to do it at the end of the day,” she says. “I’m so physically and mentally exhausted from being on my feet, I just need a breather.”

Amanda’s shifts often extend into the weekends, as is the business of restaurants and catering. And a fun family affair has bloomed out of this work schedule.

“On Saturdays, Virna stays with my parents and then I usually stay for dinner at their house. That’s kind of our tradition,” she says. It’s a custom reminiscent of her own childhood, when her mom would cook meals for her family nearly every night.

“That’s the way that I grew up, so it’s nice that she’s experiencing that too,” Amanda says. She hopes to instill the same sense of the importance of good nutrition, and a family meal, while raising her own child. This includes involving Virna in dinner prep, too.

“We cook a lot of simple things because she’s so little and still likes to separate her food,” Amanda says. The perks of being a chef come into the light at dinnertime. “I have so much food that I work with, I’ll utilize something that I’ve been cooking with already.”

Oftentimes, meals include chicken, a favorite of Virna’s. “We like to eat it!” Virna exclaims.

On this Tuesday night, Amanda carries in two brown Lucky’s bags filled with a rotisserie chicken, romaine lettuce, a sourdough loaf, and a couple of avocados. Chicken salad sandwiches are on the menu. While Virna spins around the kitchen, Amanda throws a couple slices of bread to toast in a cast iron pan, and I shred the chicken.

Amanda mixes up a quick meaty salad: avocado, mayo, and a few spices tumbled with chicken are piled atop a bed of romaine on sourdough and finished with a slice of fresh tomato. Less than 30 minutes from when we began, we sit down at Amanda’s kitchen table, moving aside Virna’s “Hungry Hungry Hippos” game, to enjoy our meal. Virna opts for a few bites of her favorite — plain chicken — before tearing off to play in the last light of day.

Shelly La Fata
Shelly’s cooking combines her plant-based culinary training with her family’s Italian heritage. This chef spends half her year on the road, slinging biscuits at music festivals with the Ozark Mountain Biscuit Co. truck, and the other half crafting Italian fare for Pasta La Fata, her booth at the Columbia Farmers Market and the name of her pop-up restaurant that features her family’s treasured style of Italian fodder.

When Shelly La Fata is crafting food for a crowd, it’s a workout. “I’m constantly lifting 60-pound pots off the ground and carrying them really carefully,” she says. “That is work.”

But does it feel like work, beyond the heavy lifting? “It does and it doesn’t,” she says. “It’s kind of complicated — it is work, but I love it, and I think I get high from it.”

Cooking for herself has a similar effect, but it’s often much simpler — and it definitely comes in smaller portions. When she’s on the road, Shelly packs up whatever fresh produce she has to take with her, or she freezes it to come back to. It’s not always this way, though; she admits that, just like any on-the-go gal, she eats granola bars and mac and cheese quite a bit, too. But when she’s at home, meals are often as fresh as they can get.

On Saturdays, after the closing bell at the Columbia Farmers Market, where she runs her Pasta La Fata booth, Shelly heads to the Barred Owl Butcher Shop to load up on fresh cuts of meat for the week.

On this day, we’re cooking up her latest find, rabbit sausage, to serve with a snack platter of sautéed zucchini, fresh tomatoes tossed in balsamic and spices, a few bunches of grapes, grandma’s cookies, Goatsbeard Farm cheese, and her own giardiniera. This is the kind of quick, fresh meal she often puts together to nourish herself and to share with friends.

“I just lay out everything I’ve got and invite friends over, maybe two of us or maybe five or six, and just snack,” she says.

This particular meal, as do many of Shelly’s, starts with a visit to see her neighbor, Tony, and his garden. It’s a place she frequents to buy produce by the pound to make fillings for Pasta La Fata and to forage for her own home kitchen.

The garden is lush at the end of summer, plump with warm-colored tomatoes and cool squash, leafy greens, and the beginning signs of fall-sprung sweet potatoes. It’s a two-acre oasis tucked into a north Columbia neighborhood. From there, Tony has nurtured this land as well as local restaurants, at times including Broadway Brewery and The Root Cellar, for nearly 50 years.

We spend nearly an hour picking (and chatting about) produce from the garden before heading home to feast on what we’ve gathered.

From her fridge, Shelly unwraps the links of rabbit sausage and fries them in a skillet. Another burner cooks the squash while she slices the tomatoes. I notice a collection of glass mason jars that store a medley of non-perishables: lentils, beans, curry powder, coffee.

Shelly picks up a jar. “This is twig tea,” she says. “You have to boil it really hard. I went to a vegan culinary school and all my instructors were yogis and they used to have us drink this tea every day to ground us.” She’s since traded tea for another source of caffeine, which she also keeps on the shelf. “Espresso beans and popcorn are my most used jars,” she says.

Soon, the stove’s off, and it’s time to assemble. She tears off a hunk of Fiddle & Stone bread and adds it to a platter filled with the cooked fare, grapes from Mountain Dove Vineyard (that taste like candy), giardiniera, and cheese.

How does she assemble such a palatable spread? She relies on instinct and training. But when she has a question, she turns to the bible — “The Flavor Bible,” that is. It’s a sort of manual that defines which ingredients and flavors work best together, and she’s not the only local chef who uses it.

“I found this [book] at Barred Owl,” she says. “Josh was sitting down reading it one day.” And each day, for each meal, whether it be for herself or her customers, Shelly keeps both new and proven flavor combos going in all of her kitchens.

Gaby Weir Vera
Gaby was born in Venezuela and grew up toddling alongside her parents in their restaurant. In 2002, she made her way to Cedar Rapids, Iowa, where she eventually enrolled in culinary arts school. After years spent working in the fast-paced restaurant industry, Gaby transitioned to life as a private chef, giving her more time to spend with her daughter. Today, she’s still very much family-centered, carrying the title of “lunch lady” at Windsor Street Montessori School and working as a chef-for-hire in Columbia.

Professionally, Gaby Weir Vera doesn’t want to be labeled as a Venezuelan chef — her food isn’t stuck in one genre, it’s always evolving. But when she entertains at home, she loves nothing more than sharing her cultural heritage by way of a dish.

“I love to host people. I love to have people at my table to be together,” Gaby says. Tonight, she’s having one such gathering, and we’re making arepas, a Venezuelan delight that Gaby compares to English muffins made with corn. They’ll be filled with chocolate beef, a slow-cooked dish that she says every Venezuelan household has its own version of, along with avocados, sofrito, and a homemade spicy mayo.
The spread, abundant with fresh food made from local ingredients, is representative of her own food heritage.

“I didn’t grow up in a country that had a strong industrial food system like in the U.S.,” she says. “Really, that’s unique to this country. In my parents’ restaurant, for instance, everything came from farmers. You didn’t think about it as local food, or that ‘this food is organic,’ that’s just what we did.”

Upon her arrival to the U.S., Gaby was at first entranced by this industrial-style food chain. “I was really excited about McDonald’s and fries, and bagels and cream cheese,” she says. “But this lasted about six months, because then I realized that everything tasted the same. It didn’t matter which restaurant you were in, there was always a chicken nugget, a fry, a burger. And then something hit me like, ‘Oh my god, I’m in a nightmare!’”

Her escape from this nightmare? Putting her own culinary skills to use. “This was a part of my drive to take over my home kitchen — I was doing it because of a necessity to taste different things,” she says.

Gaby still feels this necessity today; changing up her menu at school and at home with each passing day, fostering new flavors from fresh fare. “I can’t cook the same thing all the time. I want to keep moving.”

It’s true. For Gaby, cooking, whether at home or elsewhere, is a movement, a chance to cultivate understanding, a sense of authenticity. You can feel this current in her kitchen, in her cadence as her hands move through the arepa dough.

When Gaby connects with her roots, the authenticity of her own food story radiates. “I remember my mom’s hands, my grandma’s hands, in this bowl making these arepas,” she says. “There’s such a rich history there.”

She’s eager to share this history with her guests — any guest that finds a seat at her table. We gather, passing platters around to fill arepas. Gaby gives gentle instructions; there’s no starched right way to eat this dish, she says. The only crime is if there’s any left on the plate.

Wine bottles empty, stomachs full, and hearts open. It’s a feeling that is imparted here each night, whether the table is filled with 20 friends or her four family members.